Shrub of the Week: Exochorda

Authors
Paul Snyder
Published on
May 8, 2020 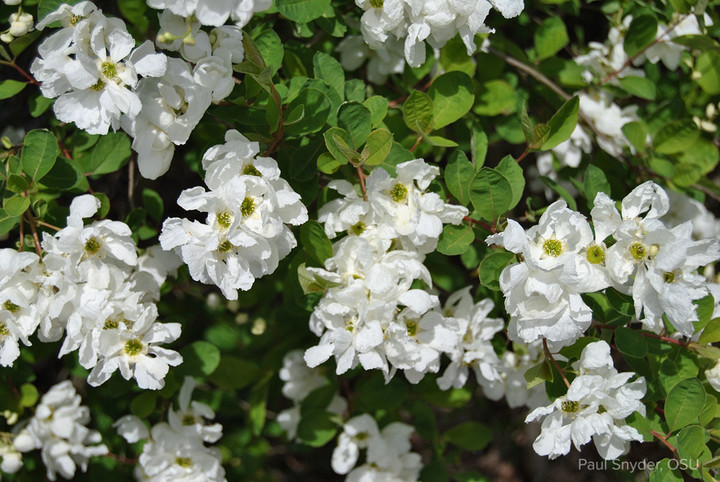 The Rosaceae is the most influential plant family in our landscapes (and the angiosperms), from Spiraea to Physocarpus, Prunus to Alchemilla, and most notably for us at Secrest, Malus. While crabapples are showing their beauty at Secrest another member of the Rosaceae, Exochorda, is also putting on quite a display.

Over the last week I have received several inquiries from people wanting to know the identity of this stunning plant, which remains in obscurity until it flowers. Michael Dirr states it best, “For about 50 weeks no one knows they exist, come March, usually mid-March in Athens, calls pour into the Horticulture Department wanting to know the identity of the white-flowered bush. I am secure in stating that E. racemosa (primary garden species) thrives with neglect” (Manual of Woody Landscape Plants, p. 421).

Pearlbush is a great addition to the landscape. It has few to no insect or disease issues, clean blue-green foliage, and show-stopping 1-2” white flowers. The common name, pearlbush, refers to the white flower buds, which hang on the plant like strings of pearls prior to opening.

Most selections on the market are hybrids (Exochorda xmacrantha, E. xmacrantha x E. racemosa) which reach heights of 3-5’, making them a good fit for many landscapes. The plant is also deer resistant. 😊

To successfully grow pearlbush plant in full sun to part shade in soils that are well-drained. Pearlbush can adapt to different soil pH without difficulty. Better news for those with clay soils, pearlbush can also adapt to clay soils.

The Bride: old standby with a vigorous weeping habit and 1” white flowers on 3-4” long racemes.