A Little Whiff of... Voodoo! 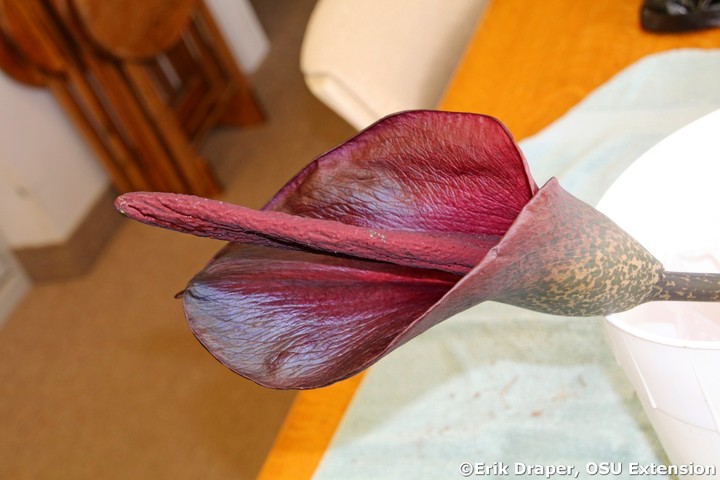 My friend Nick Reiter calls me up and says a plant-loving friend, Karen Jeric, has a plant that I MUST see and experience.  Okay, I thought, I’m always ready for a plant discovery experience and besides, I can write a BYGL Alert about it!   We arrange a way to social distance and pick up my “plant experience”.  I sneak a peek at the plant wrapped up and as I do, I get SMACKED right between the eyes… in my olfactory!

I must take pictures of my plant experience, so I decide to bring home this plant that has some very unique properties.  My wife comes home and says, “I think there is something dead in the garage… Phew!”  I smile and tell her, “No, it is not phew but Voodoo!”  and she says “No way, this pee-ew is so much worse than dog poo!”  Again, I stressed, “it’s not phew or dog poo but Voodoo…” as in Voodoo Lily (VL) or Amorphophallus konjac (a.k.a. Devil’s Tongue, elephant yam or leopard arum).

The VL emits a really putrid, carcass rotting stench that isn’t a faint whiff here and there, instead it is a full on, head and lung filling, overpowering, nasal assault that can make one gag!  The VL is in the same genus as the massive Titan arums or Amorphophallus titanum.  These Titan arums are also known as corpse plants or corpse flowers with stinking inflorescences up to 8 feet tall, while the VL inflorescences only grow up to about 5 feet tall, but are more potent stench-wise!

Like many in this foul-smelling genus, the VL has evolved to draw pollinators, so instead of floral finery, the flies flock to what is termed a “carrion flower”.  The odors emitted are a range of chemicals mimicking the scent of dead animals!  This is used to lure flies and other insects looking for an odiferous “rotting carcass” upon which they can feast and lay their eggs.  In their wandering search for a fetid feast on this inflorescence, the flies pick up pollen and unwittingly provide pollination services to the flowers.

The VL belongs to the Arum family (Araceae) and produces a single leaf from a subterranean tuber; interestingly enough, these starchy tubers are also edible and grown for food in some parts of the world.  A large, globose tuber can weigh up to 50 pounds and measure about one foot in diameter.  The VL is a tender perennial which is most often grown as a curiosity for its interesting foliage.  The single compound leaf consists of a vertical petiole, which subdivided into three sections to form horizontal rachises, from which develop a complex array of leaflets, creating a tree-like effect.  The fleshy leaf stalk or petiole is a unique, scattered mottling of giraffe-like splotches of greenish-pink to creamy white on a solid olive-green background.

The VL “flower” is also unique and characteristic of the Araceae family.  The inflorescences of these Arums are called a spadix.  A spadix consists of a thick, fleshy spike composed of unisexual, apetalous flowers.  In the VL, the flowers are bumpy protuberances emerging from the depths at the base of the upright, fleshy spike; unabashedly, the male flowers typically are clustered above female flowers and atop the male flowers exists a large sterile area to the peak of the spadix.

Here in lies the heroic challenge… to hold your breath long enough to stick your nose right next to the spadix to see down to the flowers, without PASSING OUT FROM THE STENCH!!  The spadix is surrounded by a brightly colored funnel- or vase-shaped modified bract or leaf called a spathe!  The VL has a spathe that is a shiny, deep-purple maroon to almost black in color, while the spadix is a deep-maroon to brown and can be up to about 3-4 feet in height!  While the color of the VL is truly intense and striking, beware because STRIKING can turn into STINKING in gust of wind!