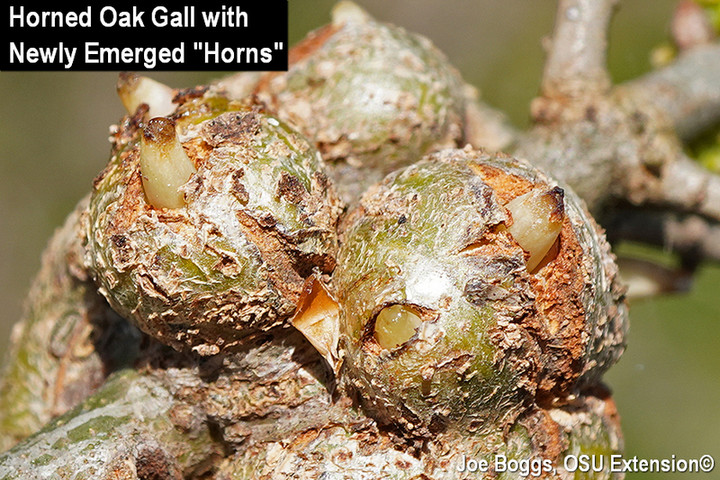 The emergence of the "horns" that give horned oak galls their common name is a short-lived event.  I've commonly observed fully extended horns, but seeing them in the process of breaking through the gall surface is a rare treat.  It's happening right now in southwest Ohio just in time to add a new dimension to Arbor Day! 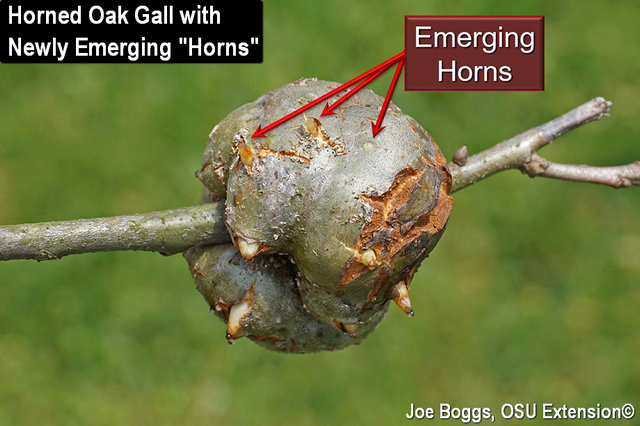 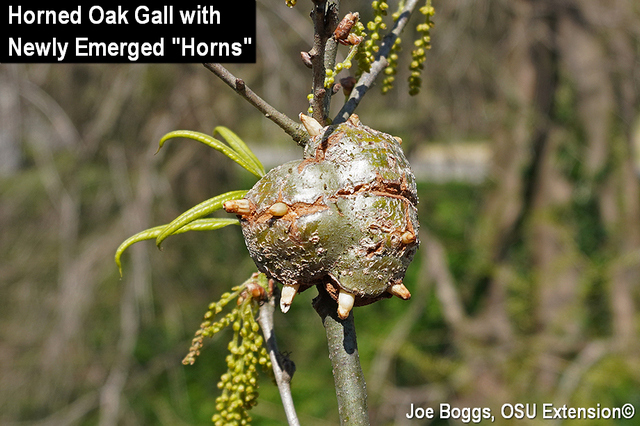 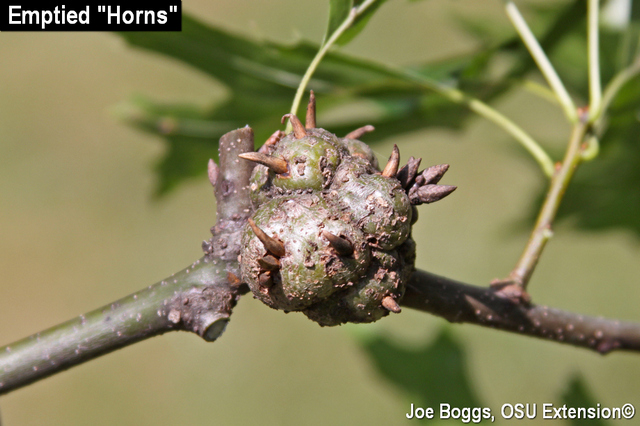 Horned oak galls are formed under the direction of the gall-wasp, Callirhytis cornigera (Family Cynipidae).  The vast majority of the insect and mite galls found on oaks cause little to no harm to the overall health of their host trees.  Horned oak galls are an exception.

The galls can harm oaks by disrupting vascular flow if the galls fully encompass the stem.  Cutting the galls open will reveal that vascular tissues become disorganized within the gall structure.  The portion of the stem beyond the gall may die from being starved for water.  The damage seldom kills trees; however, the canopy dieback may destroy the landscape value of heavily galled trees. 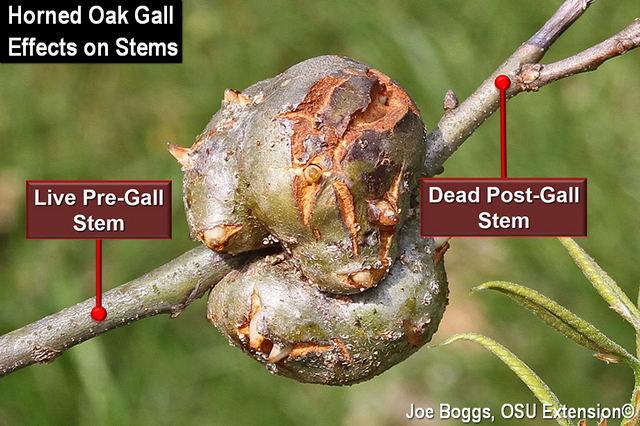 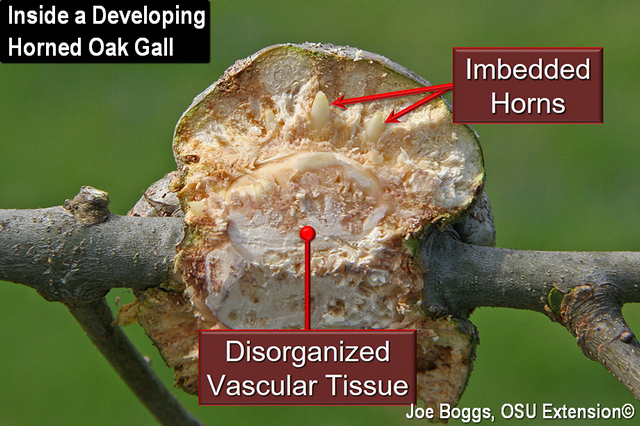 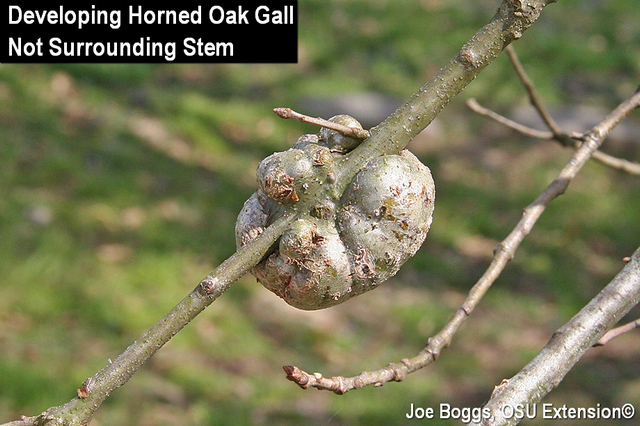 Galls produced by this wasp may be found on pin, black, blackjack, Shumard, water, and willow oaks.  However, pin oaks are particularly susceptible.

Unfortunately, gall management is problematic with no clear method to reverse the galling trend once individual trees become targeted by the gall-wasp.  Another management challenge is presented by the wasp's complicated life cycle involving asexual and sexual wasps that develop in stem and leaf galls, respectively.  Both types of galls and their associated wasps occur at the same time.

It's common to think of horned oak galls as only the dark brown, fractured, woody structures that look like a medieval weapon.  However, these "spent" galls released their wasps long ago.  They are never reused by the gall-making cynipid wasp but may linger for years marring the tree's aesthetic value. 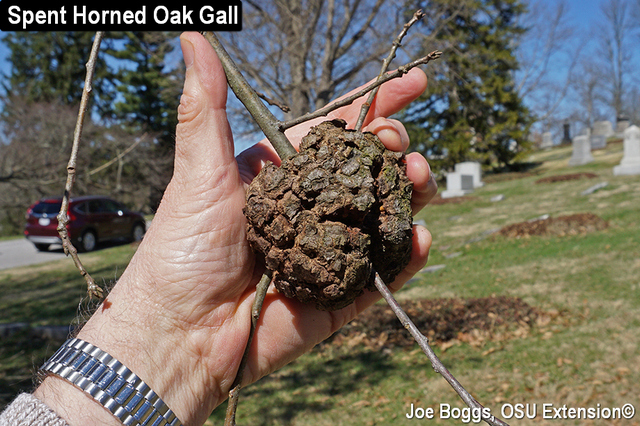 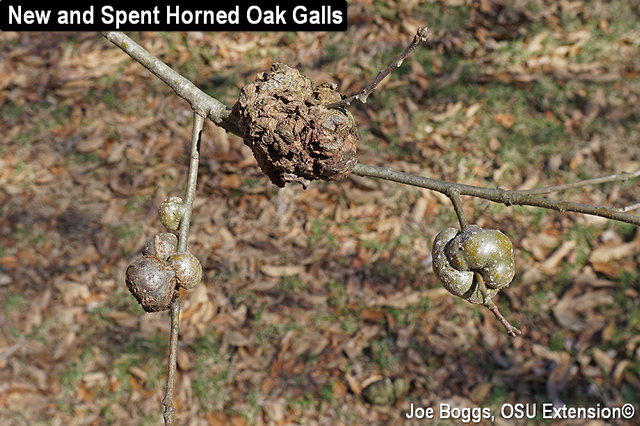 The galls that are currently sprouting horns are greenish-gray and have smooth surfaces.  It's easy to cut them open to reveal the structures within. 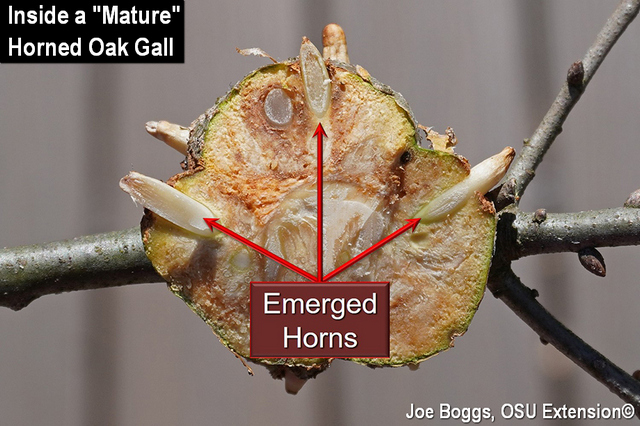 Stem gall growth is initiated when female wasps inject chemicals along with their eggs into cambial tissue.  This directs plant genes in the undifferentiated (meristematic) cambial cells to be turned on and off in just the right sequence to start gall formation.  Both the eggs and hatched wasp larvae continued to exude chemicals to further direct gall growth.

This theme of hijacked plant genes is common for all wasp galls as well as those produced by midge flies (family Cecidomyiidae).  However, it means the gall-maker must work with meristematic tissue to be able to direct gall development.

The immature wasps spend around 33 months developing within specialized "horn-like" structures imbedded in the galls.  Cutting open galls that are less than 33 months old (immature galls) will reveal the structures.  These are the same horns that are currently popping through the surface of "mature" galls. 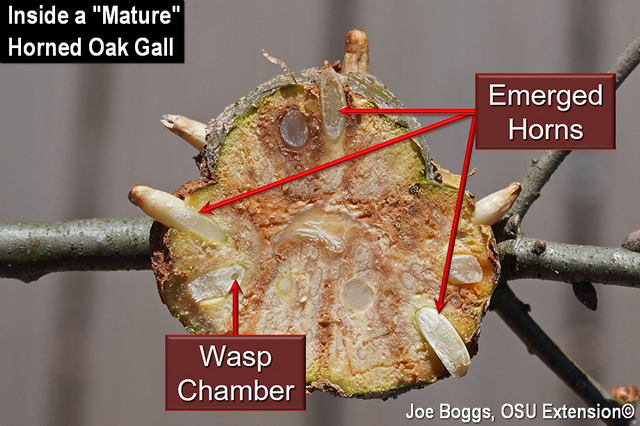 Each horn has one chamber housing a single wasp larva.  However, the stem galls are communal and may contain anywhere from 1 to 160 wasp larvae.  The size of the galls depends on the number of eggs laid by the females with larger galls supporting a larger number of larvae. 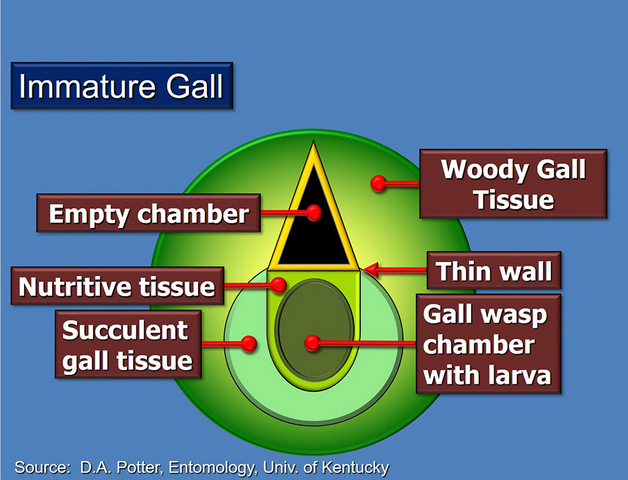 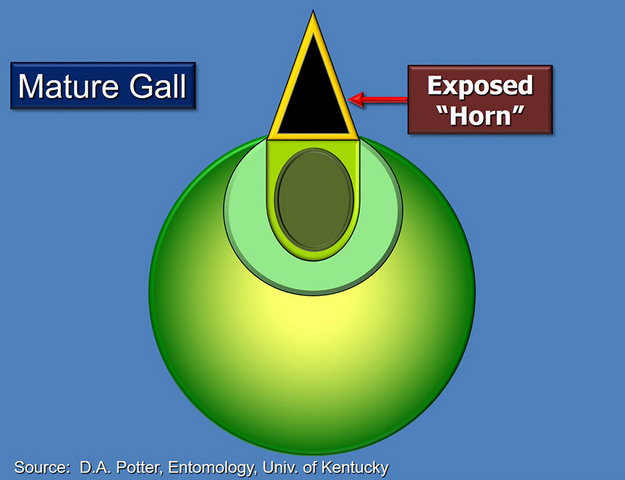 As the immature wasps reach pupation, the horns rise from within the gall to break through the surface.  This provides new wasps with easy access to the outside world.  The new wasps emerge from the horns, so you can determine the number of new wasps that developed inside the gall by counting the number of horns. 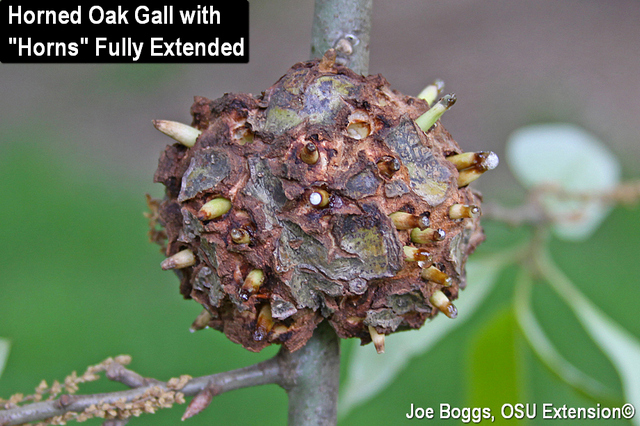 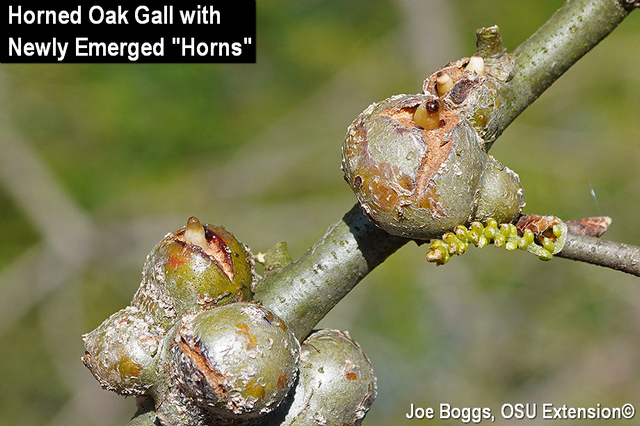 This remarkable event is very time-sensitive and only lasts a few days.  Horns were starting to emerge in Cincinnati on Wednesday at 250 accumulated Growing Degree Days (GDD).  Snowdrift crabapple (Malus x snowdrift) reaches full bloom at 250 GDD and may serve as a possible phenological indicator plant.

The exposed horns exude sugary liquid from the tips.  It is speculated this liquid may nourish the newly emerged wasps. 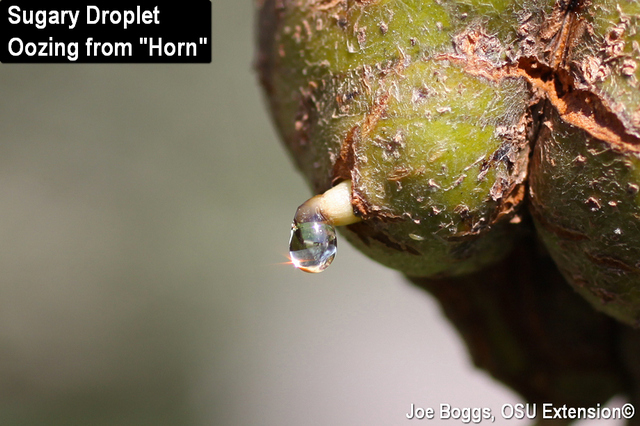 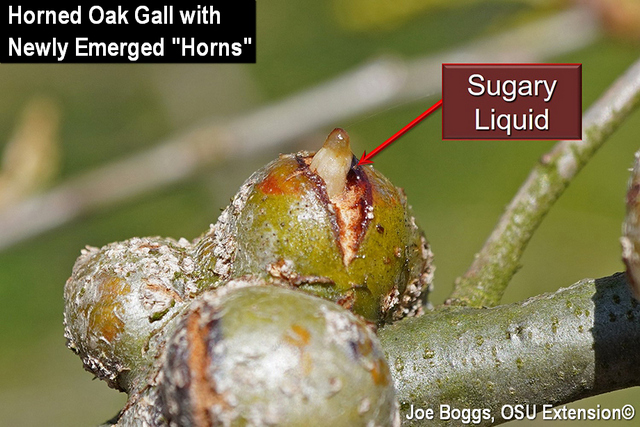 Horned oak galls also serve as homes and feeding grounds to a wide range of creatures known as inquilines.  These interlopers have nothing to do with gall development; they simply take advantage of the work done by the gall-making cynipid wasp. Indeed, the ecological niche occupied by the wasp and its associated gall is important to the survival of over 30 other arthropods such as the beautiful little clearwing moth (family Sesiidae) known as the Oak Gall Borer (Synanthedon decipiens). 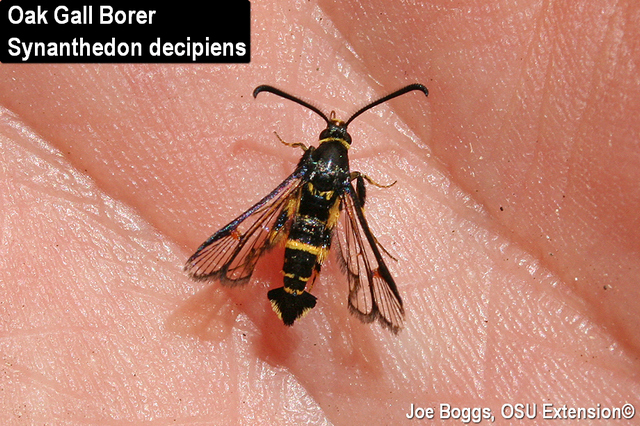 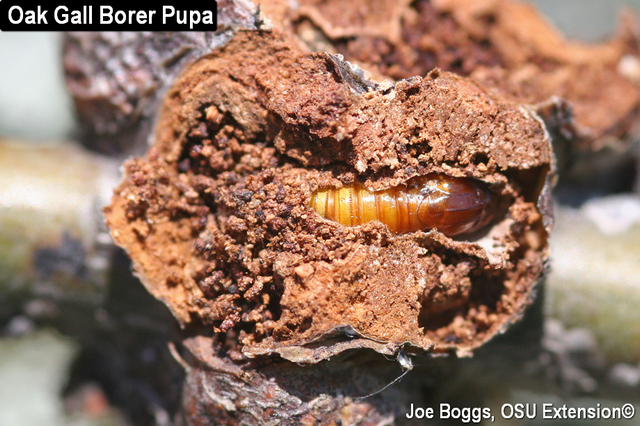 The wasps that emerge from stem gall horns are agamic; they are all females.  This form of reproduction, where females do not require fertilization by males to produce fertile eggs, is called parthenogenesis.

These wasps are poor flyers.  They crawl to developing leaves to lay eggs and initiate the production of a second type of gall; tiny, inconspicuous leaf galls that develop on the leaf veins.  It's why the rise of the horns and emergence of the wasps from the stem galls coincides with the development of nascent leaves. 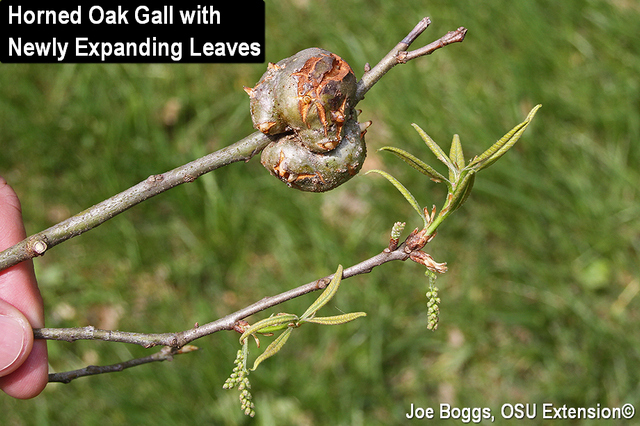 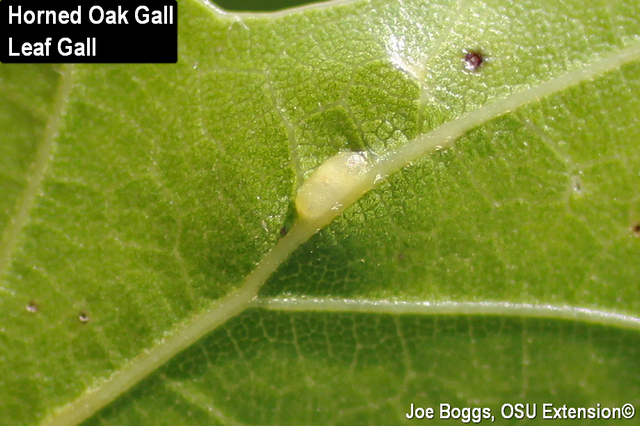 The immature wasps in the leaf galls require around 3 months to develop.  The adult wasps that emerge are both males and females; this is the "sexual generation."  The mated females of this generation are relatively good flyers and migrate to twigs to lay eggs and initiate the production of the stem galls.

The Heterogamy Headache.  The alternation between generations of two different reproductive modes and life-styles is known as "heterogamy."  Heterogamy with horned oak galls means the gall-maker resides in both leaf and stem galls at the same time.

The leaf galls occur every year providing a constant stream of wasps to produce new stem galls.  This means stem galls are not synchronized.  First-season stem galls are found on the same tree at the same time as when 33 month-old galls are releasing their wasps to initiate new leaf galls.

This makes managing this gall-wasp through pruning problematic.  Galls of all ages would need to be found, pruned away, and destroyed.  Missing a single gall means the eventual release of parthenogenetic female wasps (they don't need to be mated) that will produce a new crop of stem galls.  Cutting out galled stems may provide some relief on small trees if the trees are not eventually whittled down by continual pruning.

Is it Select-o-Tree or Just Bad Luck?  Host susceptibility to these gall-wasps is highly variable.  For example, I've been observing a row of pin oaks in a landscape for a number of years; they are pictured below.  One tree has been a gall-magnet while all of the others have remained gall-free.  It's my understanding that the trees originated from the same nursery. 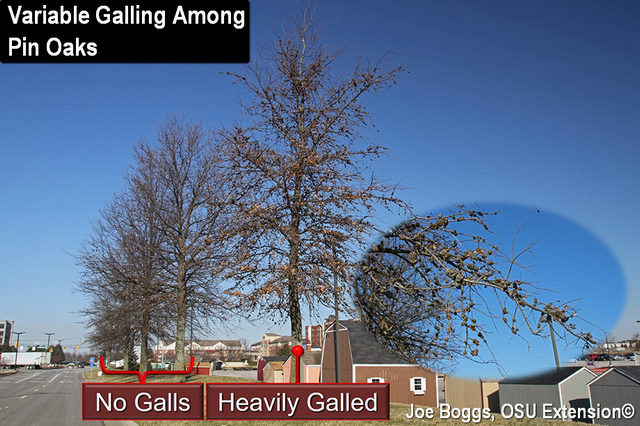 One explanation for the high degree of variability within the pin oaks could be the inherent genetic variability between the trees with some being more susceptible compared to others.  It's my understanding these trees aren't clones; they were produced from acorns.  Even though they are the same species, they are not genetically identical.

Is there a "founder effect" with wasps that are genetically best suited for utilizing a particular tree being selected over time?  Successive generations of their progeny would thrive and multiply to produce a gall explosion.  Nearby trees would escape because the wasps are not genetically "matched" to these host trees.

Other possible explanations involve rampant speculation.  Are the wasps communicating through chemical signals that translate into "this tree is good eats" causing females to remain on the tree?  Could the galls themselves exude volatiles that makes the tree more attractive compared to the other trees?  Of course, it could be all the above, none of the above; or perhaps just bad luck.

You Can't Spray the Problem Away.  Unfortunately, there is no scientific insecticide efficacy data available to guide the use of topical contact insecticides or systemic neonicotinoids for suppressing horned oak gall development.  Anecdotal accounts of suppressing gall formation using canopy sprays or soil drenches/tree injections with neonicotinoids should be viewed with skepticism.  An observed drop in stem galls after an insecticide application may be due to some other factor.

Nature Doesn't Play Favorites.  Research has shown that these native gall wasps have a number of natural enemies that are capable of significantly affecting wasp population densities.  The legless, grub-like wasp larvae residing within the thin-walled leaf galls are particularly alluring to parasitoids.  Wasp numbers may also be affected by environmental events.  A driving rain hitting the delicate wasps trying to make their way to emerging leaves would be disastrous for the wasps.  Collectively, these challenges may translate into wide swings in horned oak gall-wasp populations.

The Bottom Line.  It is clear that one effective gall-management option is to simply remove trees that for whatever reason have proven to be highly susceptible.  Another option is to live with the problem by recognizing that this is not a tree killer.  In fact, I think these galls add ornamental value, but I may be biased. 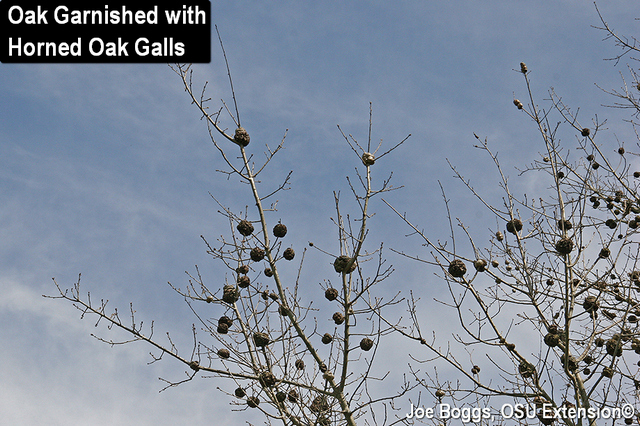 Credit Where Credit's Due

Virtually everything we know about horned oak gall development and management comes from the Ph.D. thesis research conducted in the late 1990s by Eileen Eliason (now Buss) in partnership with her major advisor, Dr. Dan Potter, Entomology, University of Kentucky.  Their work remains a touchstone example of the rigorous research required to unravel the intricate dance between an insect gall-maker and its plant host.