Green "Ramping Up" All Over NE Ohio Forests 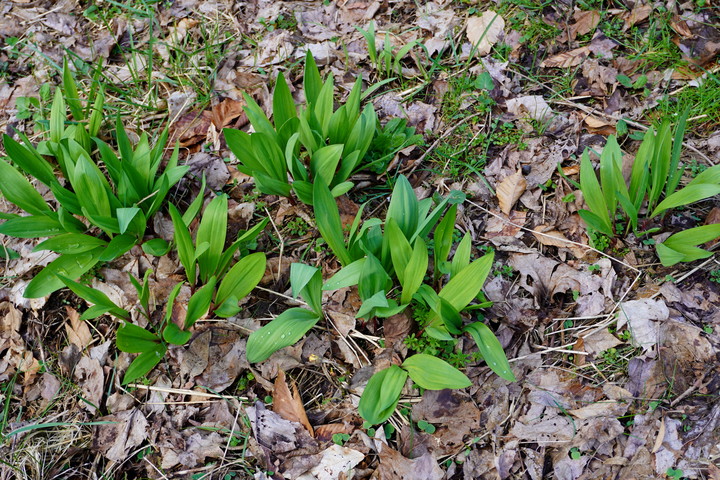 As I was out walking and checking our phenology sequence here in Northeast Ohio, I couldn’t avoid noting massive patches of green scattered across the forest floor.  The more closely I looked, the more I noticed it was EVERYWHERE in the woods.  Well, I couldn’t let an opportunity for some plant investigation go untouched, so I tramped off the beaten path… proclaiming social distancing rights!  I was astounded to discover that as far as the eye could see, it was Allium tricoccum (AT) or more commonly called “ramps” by foraging aficionados.

AT is a bulb-forming perennial, which can be easily identified by the two broad, flat leaves being produced from each bulb.  These two elongate, oval leaves are a lighter mossy-green and 1-2.5 inches wide and 5-10 inches long and often have a deep purple or burgundy tints on the lower stems arising out of the soil.  Both the white lower leaf stalks and bulb and the broad green leaves are edible much like a scallion or green onion.

Ramps, also known as spring onion, ramson, wild leek, wood leek, and wild garlic, are closely related to onion, garlic, shallot, scallion, chive and Chinese onion!  All of the aforementioned monocots belong in the Amaryllidaceae family and all belong to the genus Allium.  Ramps are native to North America and most commonly are found in clusters growing in moist deciduous forests.  They are one of the earliest plants to emerge and show green in Spring.  Ramps can be found scattered from the Appalachian Mountains, north into Canada, as far west as into Missouri and then north into Minnesota and finally, as far south as Tennessee and North Carolina.

If you dig one up, you’ll get a whiff of both onion and garlic; ironically, the flavor of ramps is described as a combination of onion and garlic, with the garlic flavor being particularly conspicuous.  Evidently, the flavor and smell are pungent enough that even die-hard ramp lovers will advise caution when using them in food preparation—so that they don’t overwhelm all other flavors.  The green tops of ramps are described as being milder in flavor and are often used along with a portion of the stronger-tasting bulbs in an attempt to reduce the flavor intensity.  It’s that same pungent smell and flavor that has earned them the nickname of “little stinkers.”  Boy, that’s something ponder over next time you want to try a bowl of the Potato and little stinkers soup!