Be on the Lookout for Wild Parsnip! 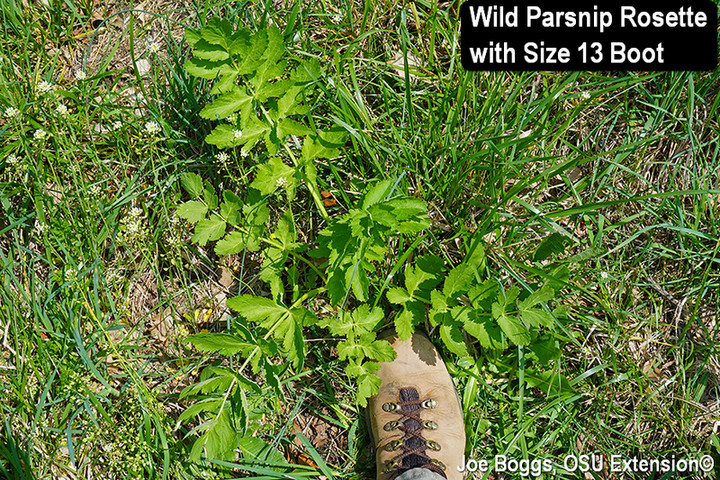 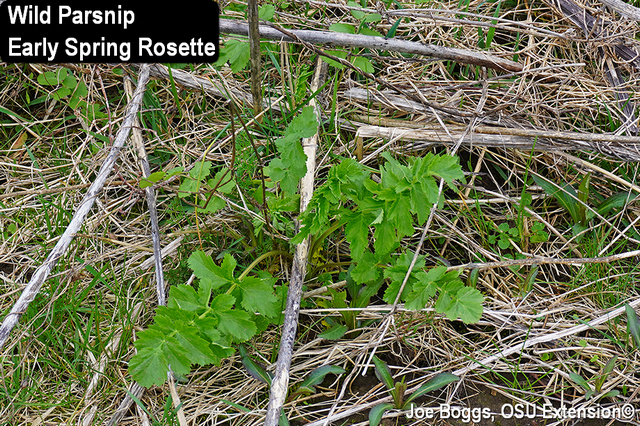 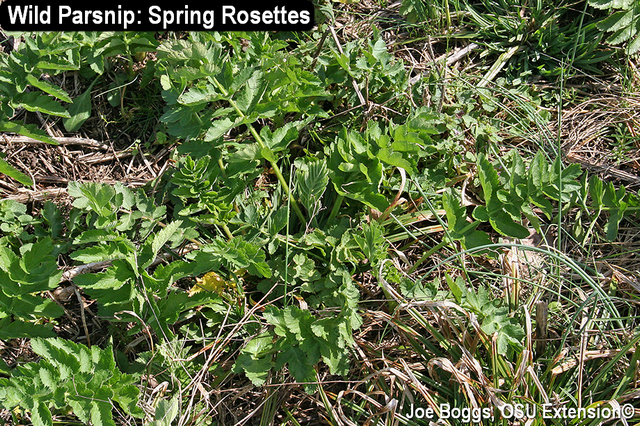 Plants spend the first year as rosettes with leaves confined to growing from a short stem near the ground.  While in this stage, the plant produces a long, thick taproot.  Flower stalks rise from overwintered rosettes during the second year.  Leaves are alternate, pinnately compound, branched, and have saw-toothed edges.  Each leaf has 5 -15 ovate to oblong leaflets with variable toothed edges and deep lobes. 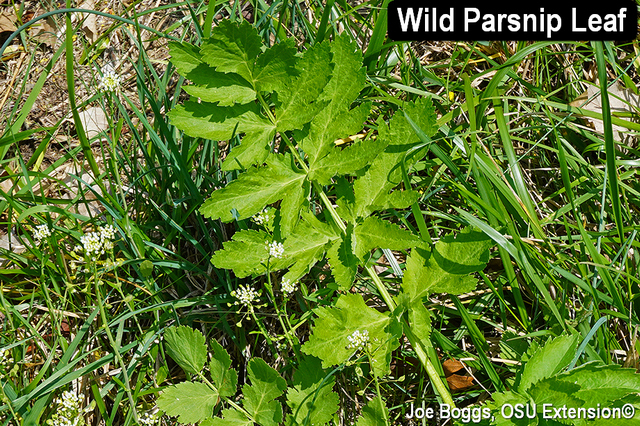 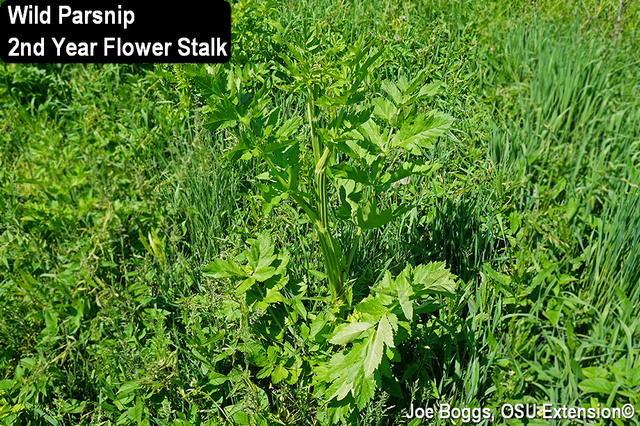 Second-year plants can grow to impressive heights topping 8'; however, most mature plants range in size from 4 - 6'.  Mature plants will produce a single, thick, deeply grooved, greenish-yellow stem that sprouts lateral branches topped with hundreds of clusters of the umbellate flowers.  Plants are prolific seed producers meaning that small patches of this weed can develop into large patches in just a few years. 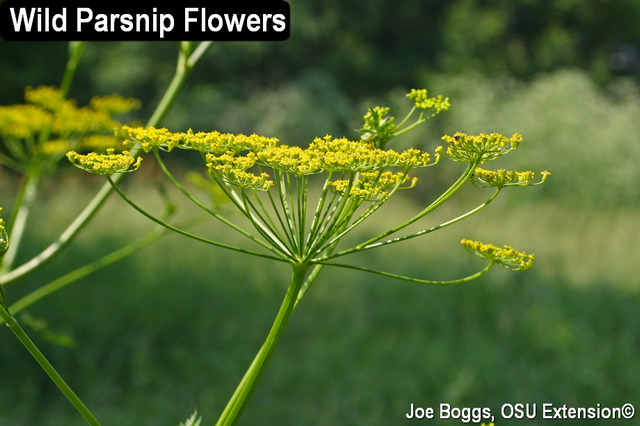 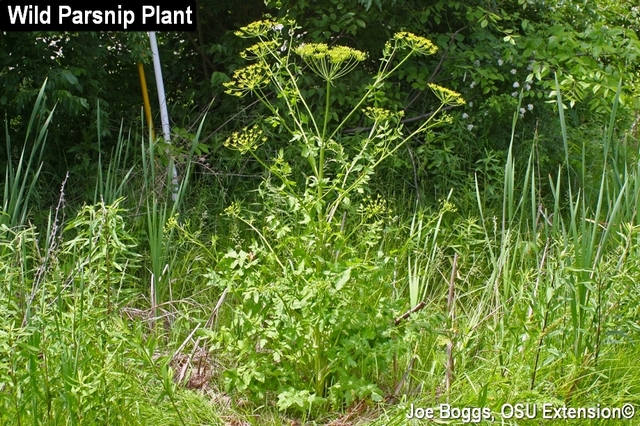 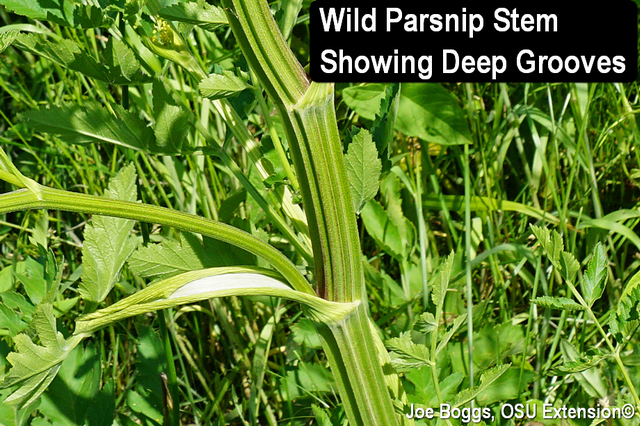 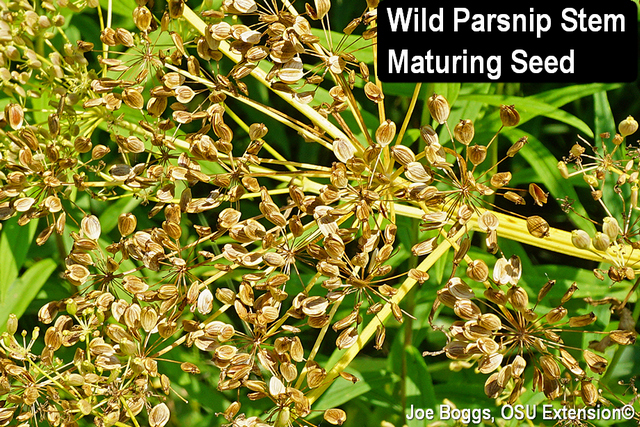 Wild parsnip has become increasingly common in recent years in Ohio landscapes and fields.  Reasons behind the ever expanding distribution and rapid expansion of infestations are not entirely understood.  However, it is clear that the proliferation represents an increasing risk to both people and animals. 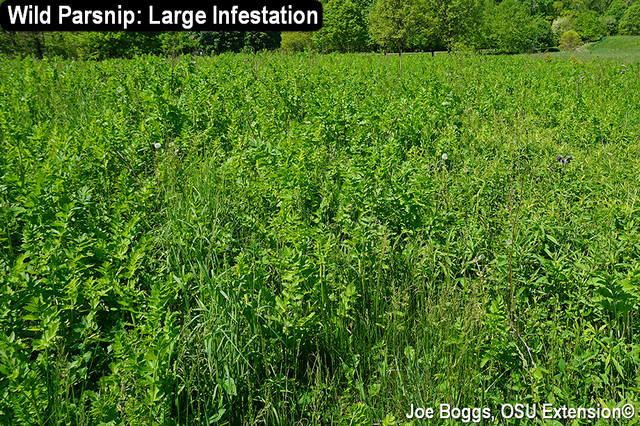 Landscape managers and gardeners should exercise extreme caution around this non-native invasive plant.   Wild parsnip sap contains psoralen which is a naturally occurring phytochemical grouped in a family of organic compounds known as linear furanocoumarins.  Psoralen acts as a photosensitizing compound by inhibiting DNA synthesis in epidermal cells which kills these light-shielding cells responsible for protecting us from long-wave ultraviolet radiation (LWUVR) bombarding us in sunlight. 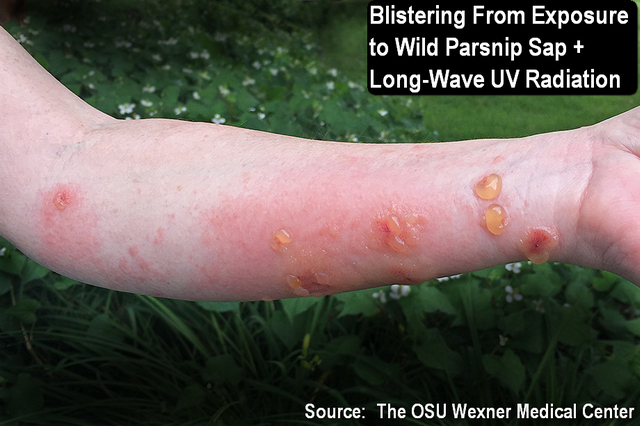 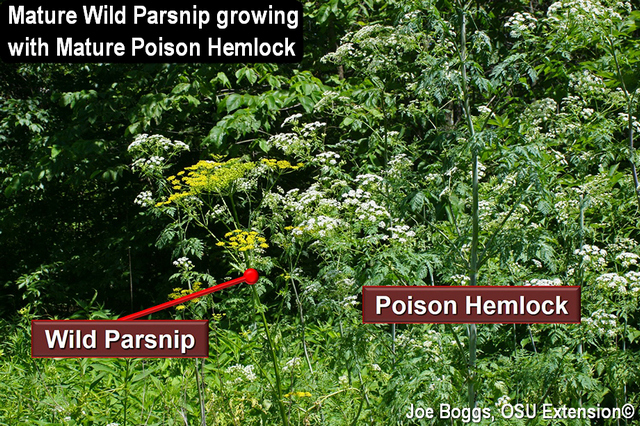 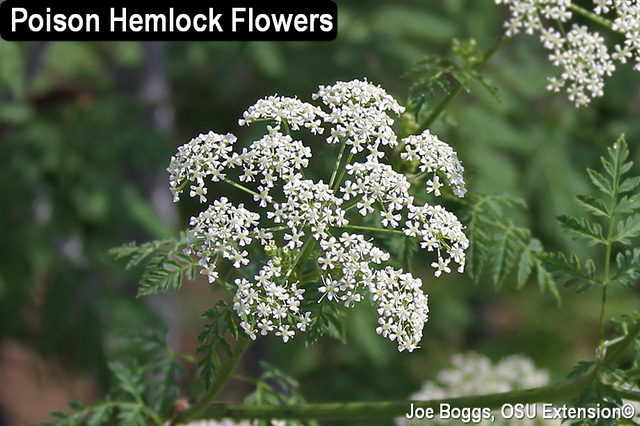 Parsnips have been cultivated as a root crop in Europe for centuries; perhaps millennia. The "L." in the scientific name Pastinaca sativa L. means Linnaeus first described the species.  Both the cultivated and wild types share the same scientific name; however, it is clear that there are significant differences in toxic biochemical properties, invasive behavior, and some morphological features between the two types.

Early taxonomic efforts treated the different types of parsnips as subspecies.  More recent research has shown that while the subspecies designation may still be valid for some types of parsnips, the cultivated types have their roots in varieties which makes sense from both an evolutionary and agricultural perspective.

It is now theorized that the wild parsnip plants in Ohio represent "escapes" from cultivated types brought to North American from Europe and a "reversion" back to a wild type.  The wild genes were always there but remained suppressed until revealed through natural selection.

For example, research on wild parsnip has shown that psoralen behaves as a phytoalexin which are plant defense compounds aimed at thwarting attacks by macro and microorganisms.  Although the concentration of psoralen is inherently higher in wild types compared to cultivated parsnips, researchers found that the production of the plant toxin increases in wild types in response to wounding by herbivores imparting an obvious plant survival advantage.

On the other hand, a selective advantage is awarded to herbivores that can handle phytoalexins.  Heavy damage by fourlined plant bugs (Poecilocapsus lineatus) will be a common feature on wild parsnips later this spring in Ohio. 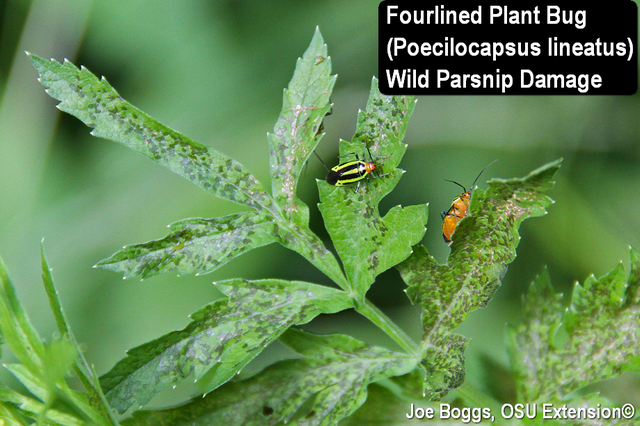 The parsnip webworm (Depressaria pastinacella) focuses its entire attention on its namesake host.  The webworm thwarts the plant's chemical warfare by excreting most of the plant toxin in their feces.  However, some of the toxins are incorporated into the caterpillar's silk webbing.  The purpose is unknown, but it is speculated that the toxins provide protection against predators and parasitoids as the caterpillars feed on the flower parts.  Unfortunately, wild parsnip is so prolific that damage by the caterpillars provides little relief from the continual spread of this vegetable gone wild. 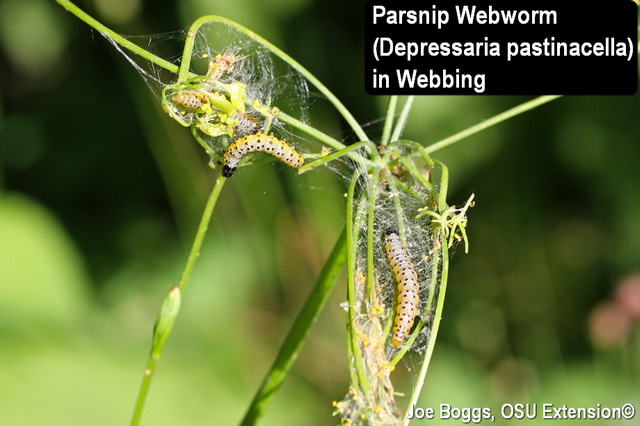 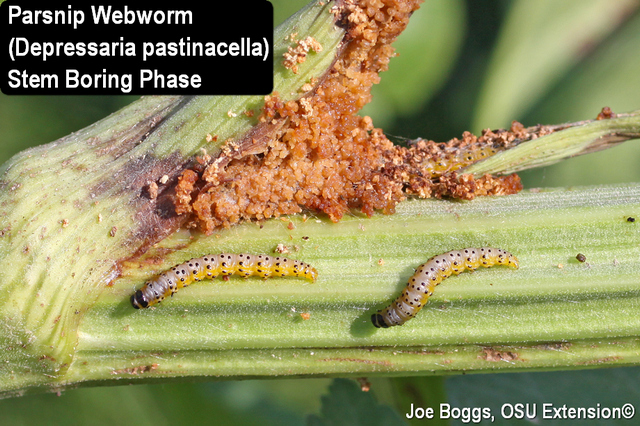 The extreme skin reaction to the wild parsnip sap means this non-native invasive weed should not be allowed to grow where it can be easily contacted by people.  However, mechanical control is problematic.  Hand-pulling is a high-risk endeavor and not recommended.  Likewise, tilling would release a huge amount of harmful sap.  There have been reports of sap spattered by mowers and string trimmers producing phytophotodermatitis on exposed arms and legs of equipment operators. 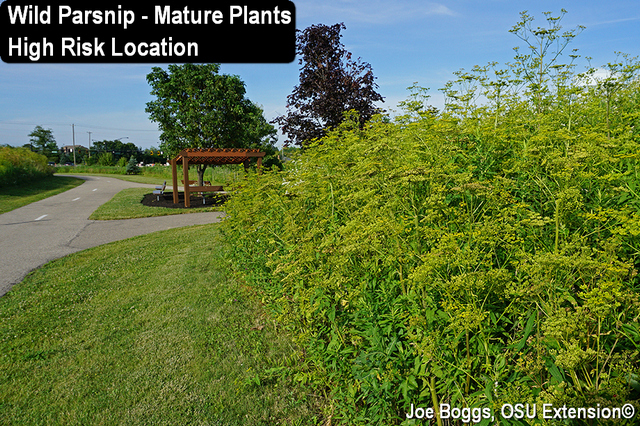 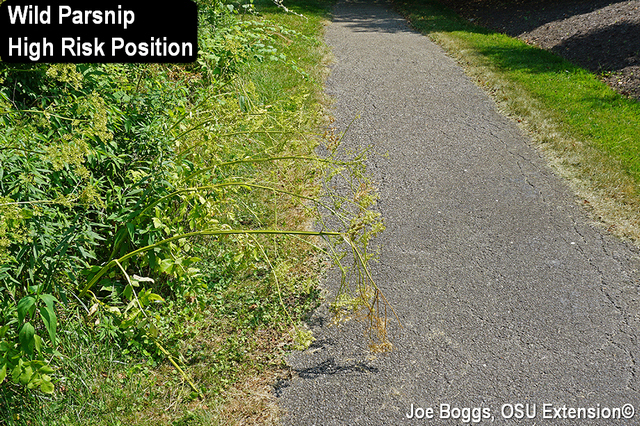 Wild parsnip plants are susceptible to a number of selective and non-selective postemergent herbicides.  However, keep in mind that non-selective herbicides such as glyphosate (e.g. Roundup) can also eliminate plants that compete with wild parsnip.

Herbicidal openings produced by non-selective herbicides provide perfect opportunities for more wild parsnip to spring forth from previously deposited seed.  Thus, it's important to have a plan for establishing competitive plants after the wild parsnip dies off such as over-seeding with grasses. 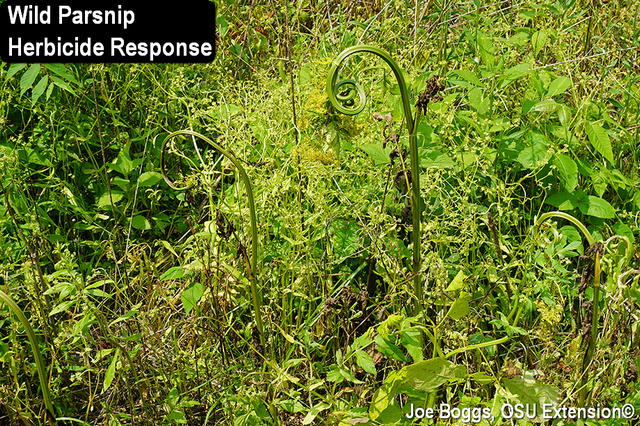