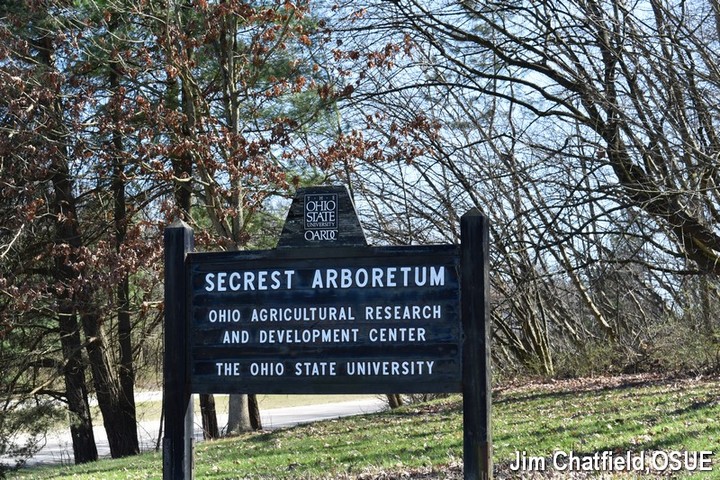 This is the latest bygl-alert on what is happening at OSU’s Secrest Arboretum in Wooster, Ohio. I do some of my daily duly-distanced walks there. The last such alert was on March 27, so this is an update. Growing Degreee-Days for Wooster then were at 76. Yesterday (April 3) they were at 95.

Another great way to keep up with plant development at Secrest is through the secrest_arboretum Instagram account, where Paul Snyder, Matt Shultzman, and Jason Veil are posting periodic pictures (much better than mine).

Star Magnolia (Magnolia stellata) went from buds just opening n Wooster on March 27 to “Spring is Busting Out All Over” on April 3 at Secrest. It looks like development will slow in Wooster after a few more days in the 60s, with high temperatures next week mostly around 50 (and thus not accumulating degree-days) and not freezing at night. This could mean that, for the second year in a row, star and then saucer magnolias (first bloom at GDD = 133 ) should have an extended period of bloom, without freezing or frying.

Maple Blooms. Red maples (Acer rubrum) are showing their pistillate (female) flowers these days, providing the red pastel colors you see along roadsides and at the Arboretum. if the color is more orangish on red maples then you are seeing staminate (male) blossoms.

Of course some confusion reigns when comparing these blooms with the earlier blooms of silver maple (Acer saccharinum), especially since red and silver maples commonly hybridize (rilver maples or Freeman maples). Box elder maple (Acer negundo) staminate blooms were out yesterday at Secrest as well. Next species up: Norway maples (Acer platanoides) with first bloom GDD = 116 .

‘Strawberry Parfait” Crabapple. This is one of the earlier blooming crabapples.  As you can see, the flower buds were well-developed yesterday at Secrest. Arboretum curator Jason Veil and I chatted, distantly, yesterday, and looking at weather forecasts and putative GDD developments for Wooster we predict “peak bloom” for the over 70 crabapple types in Crablandia at Secrest to be the week of April 20. “Peak” is imaginary, because different taxa of these ornamental Malus = apples with mature fruits two inches in diameter or less, differ in first bloom over a three week or so range.

Taxus cuspidata ‘Capitata’.  I recently gave a talk about Taxus Trees. We usually think of the genus Taxus  as a foundation shrub, but there are many different types of Taxus, and some become quite tall and broad if grown in the open, instead of pruned as shrubs. Another bygl-alert is due soon (though many deadlines for “taxes” are postponed this year), but for now, I realized when preparing that talk that I did not have a picture of the magnificent Taxus cuspidata ‘Capitata” in Wooster at OSU’s Ohio Agricultural Research and Development Center. I had taken many pictures in the past, but…Here are a few now from March 28.

Dawnredwood (Metasequoia glyptostroboides) is one of the signature plants of Secrest Arboretum. The graceful, light green spring foliage of this deciduous conifer will emerge in not too many weeks from now, but what my wife and I noticed yesterday at Secrest was how many cones were on one of the dawnredwoods that lead into the Dawnredwood Grove.

This happens every year, and we saw the female cones produced last year and the male cones for this year in clusters along with solitary female “flowers” that I have never myself noticed. Dawnredwoods are monoecious, with male and female “flower” parts not in the same blossom. But, so many of last year’s cones? I shall have to learn if this is or is not unusual.

Sweetgum (Liquidambar styraciflua). One last plant: just a few words: why am I including this picture of last year’s fruits and this year’s buds?  Stay tuned for future bygl-alerts for…the rest of the story.