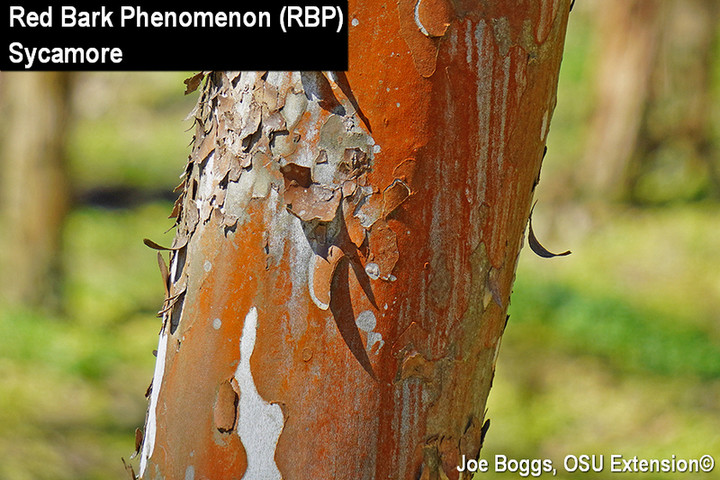 I posted a BYGL Alert last year on peculiar red staining occurring on the bark of sycamores (Platanus occidentalis) and London planetrees (Platanus x acerifolia).  Some of the reddening included streaks that made trees look like they were oozing blood [see Red Bark on Sycamore and London Planetrees, April 24, 2019: https://bygl.osu.edu/node/1241 ]. 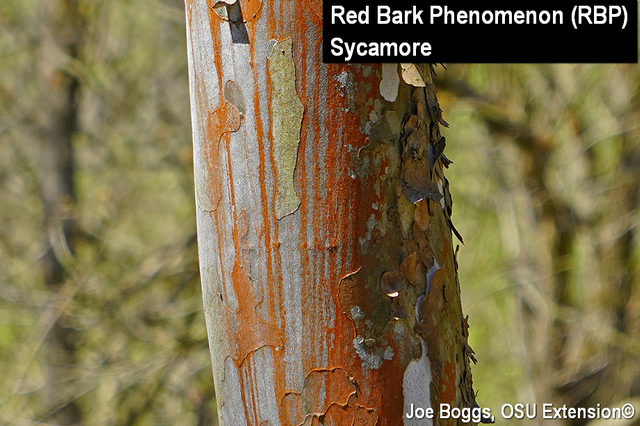 The staining was termed the "Red Bark Phenomenon" (RBP) based on a publication by The Connecticut Agricultural Experiment Station.  My RBP Alert had its roots in an e-mail message from Jerry Frankenhoff (Urban Forester, Great Parks of Hamilton County (GPHC) who observed the symptomology on sycamores and London planetrees. 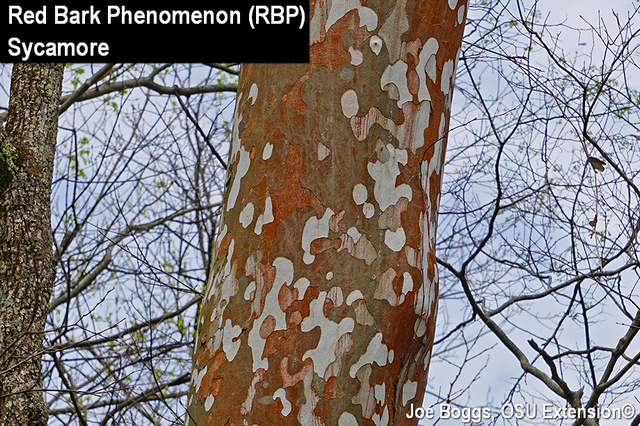 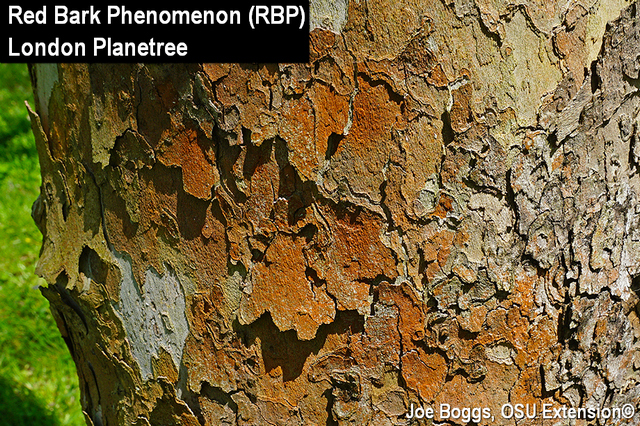 Jerry and I used a drawknife to determine the depth of red coloration on a London planetree.  It was clear that the reddening was a surface condition and did not appear to penetrate the bark or cambium.  In fact, there was no evidence of pathogenicity such as discoloration of the underlying tissue.  We concluded the condition represented no threat to the affected trees.  Perhaps it even added some ornamental value (?). 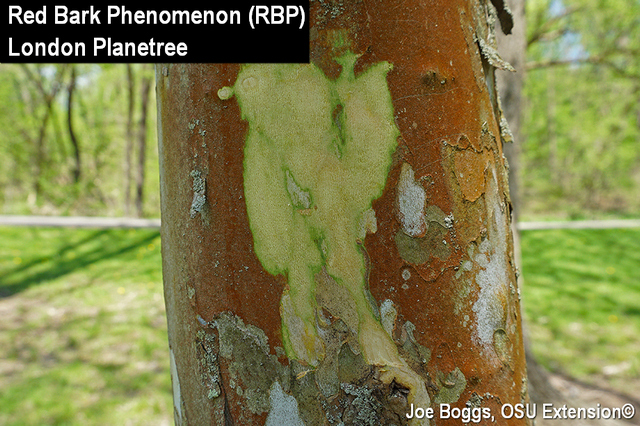 I revisited the GPHC locations this past week and found that the RBP observed on sycamores last season remains evident on the same trees.  I also observed very light staining on trees in an area in the park that I hadn't visited last year.  I'm not certain whether this represents the beginning of RBP, or the end, or both. 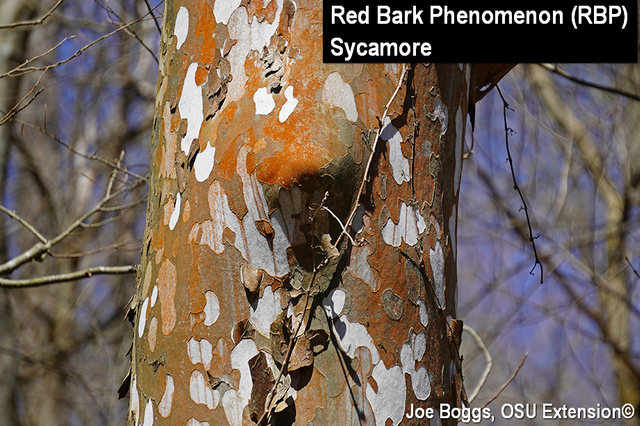 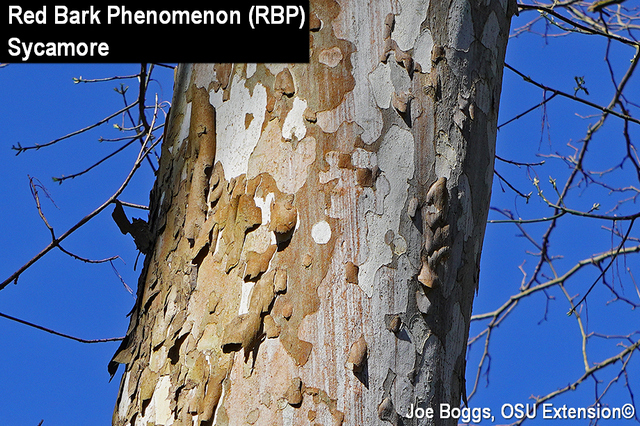 Another observation was the seemingly random distribution of the RBP among sycamores.  Proximity to an affected tree appeared to have little influence on whether or not trees showed symptoms.  For example, the image below shows two stems joined at the base, presumably because they were stump sprouts; yet only one stem shows heavy RBP symptoms. 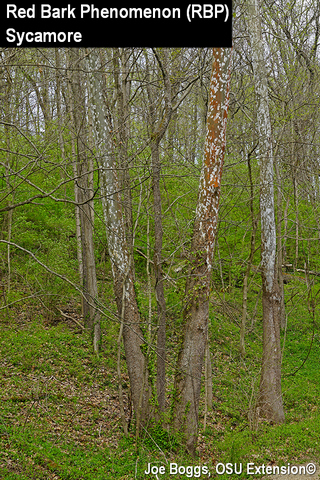 I asked Alert readers last year to send RBP observations with pictures and received 19 e-mailed reports.  With one exception, the observers were not BYGL Alert subscribers.  They had observed affected trees and found the Alert by searching the web using keywords such as "red bark on sycamore," "red bark on trees," etc.

Respondents reported observing RBP trees in the following states with the number of unique observations in parenthesis:  Alabama (1); Indiana (4); Kentucky (2); Maryland (1); Michigan (1), Mississippi (1); Ohio (8); and Tennessee (1).  Additionally, I received 4 reports with pictures from arborists in Kentucky after including information on the RBP in a presentation at the Kentucky Arborists Association Annual Conference on February 20, 2020.

The vast majority of the reports were of RBP on sycamores.  However, observations were also made of red bark on white oak (Quercus alba) and shagbark hickory (Carya ovata) (1 report, same observer, Ohio); and eastern white pine (Pinus strobus) (1 report, Michigan).  A common observation was that the affected trees were near water.  Of course, sycamores are flood plain trees so it's hard to say whether it's the trees or the RBP (or both) that's associated with water.

One disturbing report concerned a sycamore being taken down by its owner because of its reddened bark.  Apparently, the owner had been convinced by a neighbor that the tree was diseased and the affliction would spread to other trees in the area.  The arborist who sent the sycamorecide report had been called to assist with clean-up and stump grinding.

A Possible Diagnosis of RBP

Carole Cheah and DeWei Li (Valley Laboratory, The Connecticut Agricultural Experiment Station) published a technical report titled, "The Red Bark Phenomenon" in 2016.  The report includes numerous images showing bark reddening on a number of trees as well as maps showing locations in Connecticut.  You can read their report by clicking this hotlink:  https://www.researchgate.net/publication/313474528_The_Red_Bark_Phenomenon ]

They note that RBP has been observed in several New England States and surveys revealed that the condition may be found on over 20 tree species including both conifers and hardwoods.  However, sycamore and London planetree are not included in their report.

The authors tentatively identified the causal agent behind RBP as a filamentous green alga belonging to the genus, Trentepohlia.  They were uncertain of the exact species and even postulated the species is yet to be described.  However, they note that large quantities of carotenoids and haematochrome in the alga's cytoplasm masks the green of the chlorophyll and is responsible for the orange-red color on the tree bark.  They also observed that the alga is a surface condition and does not appear to penetrate the bark or cambium. 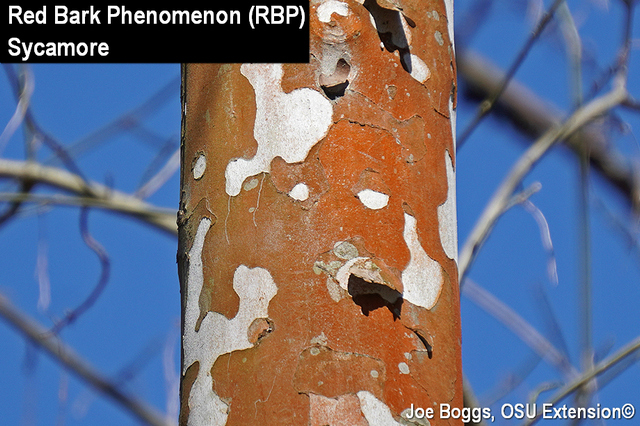 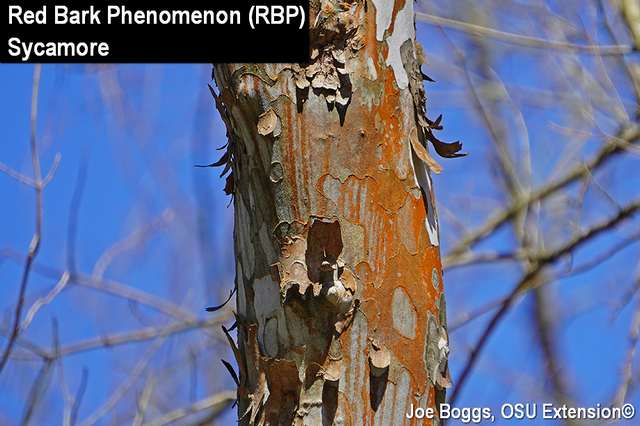 I learned through an exchange of e-mail messages last year with Gail Ruhl (retired:  Senior Plant Disease Diagnostician, Purdue Plant and Pest Diagnostic Laboratory) that she had processed samples of RBP on sycamore collected by Philip Marshall (Forest Health Specialist, Indiana Division of Forestry) in January 2019.  Based on a microscopic examination, she had also tentatively identified the causal culprit as an alga and she likewise noted that there appeared to be no associated damage to the bark or cambium.