The Rose Garden: And It's Not About The Genus Rosa 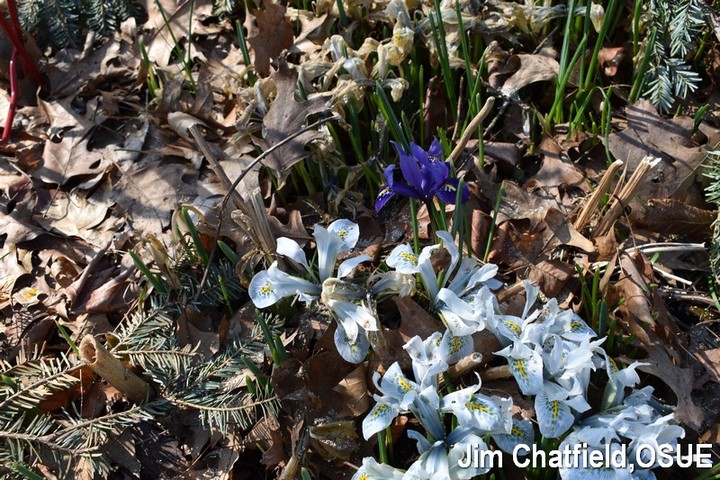 Last week one of OSU’s Master Gardener Volunteers and friend Lois Rose treated me to some images of her garden. Let us take a look at what was happening then in A Rose Garden in the Cleveland area.

Dwarf Iris (Iris reticulata ‘Katherine Hodgkin’).  At least that is what we think is the cultivar, after conferring with OSU Master Gardener Volunteer coordinator Pam Bennett. Wow. What my watercolorist mother Marcella would call Pastel colors. So delicate. As Pam said; “I have to get some.” Amy Stone of OSUE, Lucas County concurred with the ID, on our BYGL Inservice this morning, sending her pictures as well.

Chervil.  Lois grows chervil or French parsley, a cool-season herb, and I suspect she supplies this to L’Albatross, the French bistro in Cleveland where she has another garden that helps supply fresh herbs and vegetables to the kitchen. Chervil is one of the fragrant four (I made that name up) herbs used in fines herbes often added at the last stage of preparation in French cooking, along with tarragon, chives, and parsley. Subtle flavors (a bit like mild fennel) for omelettes, soups, salads, fish, and chicken. Chervil is a key in béarnaise sauce.

Chervil (Anthriscus cerefolium) is of Caucasus origin and is in the Apiaceae, the parsley or carrot family, which used to be called the Umbelliferae. Not surprisingly the seed-heads are umbels (defined as “a flower cluster in which stalks of nearly equal length springing from a common center and forming a flat or curved surface, characteristic of the parsley family.”

Unidentified Evergreen.  Lois and I also failed to identify another of the plants in her garden, with its picture shown below; and again, help was on the way. I shared the picture with Jason Veil, Curator of the OSU Secrest Arboretum in Wooster, and his reply:

This plant, which I have reason to believe resides at the southern edge of the mostly vacant Taxus plot at Secrest Arboretum is Juniperus rigida, temple juniper or needle juniper. Distinctive is it not?

Arborvitae Winter Desiccation.  First, something entirely different than desiccation.  We have many reports of arborvitae declining and dying in landscapes this winter, at least some of them in low areas. We have a hypothesis: that this may be due to very wet conditions last spring followed by an extended dry period later in the summer.

This 1-2 wet-dry punch reminds us of the demise of that Taxus plot Jason refers to at Secrest: We suspect that feeder roots of the Taxus in this 50+  year-old collection lost many feeder roots from poor root health in the near-record wet year of 2001 followed by near-record early-season drought of 2002 in which feeder roots did not regenerate, half the plot succumbed in the summer of 2002.. This was repeated in 2011-2012 when the half of the plot that survived the 2001-2002 onslaught then died.

We shall see with arborvitaes. Obviously most are doing very well (if in good drainage) across Ohio, including the ones in The Rose Garden. Which brings us back to the original title: the desiccation. It is temporal, soon to reverse itself. Note the difference between the upper foliar surface and the lower, non-exposed, much greener foliar surface on the arborviatae. Simply ephemera of the cold season.

Rhododendron mucronulatum. Last week seemed a little early for this pale lavender Korean native rhododendron, but there it was nestled up against the warmth of the Rose House.  Rhododendrons and azaleas are all in the genus Rhododendron, but one (not perfect) rule of thumb is that azaleas have five pollen-bearing stamens, while rhododendrons have ten. The genus is in the Ericaceae, the heath family, and like other genera in the family prefers acid, organic, well-drained soils.

Siberian elm.  This elm (Ulmus pumila) is sometimes mis-named the Chinese or elm, but that is the lacebark elm (Ulmus parvifolia). Siberian elm is far less ornamental and often considered invasive. It is a grandfathered community forest tree in the Rose neighborhood, gradually being phased out over the years, but it does still have attractive rows of orb-shaped flower buds opening along the twigs this time of year.

Magnolia stellata. Star magnolia showed flower buds in the Rose Garden last week, and probably those buds have at least partially opened this week. Note that OSU student Claudia Winslett showed Loebner hybrid magnolias (with one parent being star magnolia) blooming in Columbus this past weekend.

In northeast Ohio temperatures are struggling to reach 50 degrees this week and probably until Friday, so flowering is at a standstill for now, but with 9 out of the next 14 days predicted in the 60s and higher, degree days are going to be building up if the weather reports are accurate. The 70-degree days predicted for Wooster for April 7-8 alone should add 20 growing degree-days alone (70-50/2 X2=20).

Witchhazel. The native vernal witchhazel (Hamamelis vernalis) in The Rose Garden is showing off its marcescent leaves after its earlier (winter) season of bloom.

Corylopsis.  The butter-yellow blossoms of Corylopsis have made this member of the witch-hazel family one of my favorite late winter/early spring flowering shrubs. Last week this “winter hazel was in bud for Lois and today it is in a holding pattern with one open bloom at my house in Doylestown in northern Wayne County.

Hardy-Orange.  Lois expressed outrage (mock, I hope) at my description a few weeks ago of hardy orange’s “ominous” look. It is one of her favorites and she makes a mean bitter-orange (Poncirus) marmalade which she often brings to our ArborEatUm edible landscaping programs at Secrest in October. Differently delicious, but I still say that yonder Poncirus has a mean and jungly look.

Japanese Holly. Lois has a Japanese holly (Ilex crenata). How do you quickly tell the difference of this evergreen shrub from a boxwood (Buxus spp.)?  The leaves of boxwood (in addition to being malodorous) are opposite, instead of alternate for Japanese holly. Boxwood: BO.  Holly: HA.

Oh, there is more there. River birches of great beauty, but as Lois’s husband Doug noted they drop sap onto cars onto the driveway. The Rose Garden sports a Japanese umbrella-pine, Sciadopitys verticillata doing well. There were spring croci in glorious bloom and saffron or Autumn croci with leaves just coming up, with flowers to arrive near the end of the growing season. And trust me, from my earlier visits there, hundreds upon hundreds of additional well-tended plants, set to hold court this spring, summer, and Autumn in: The Rose Garden.