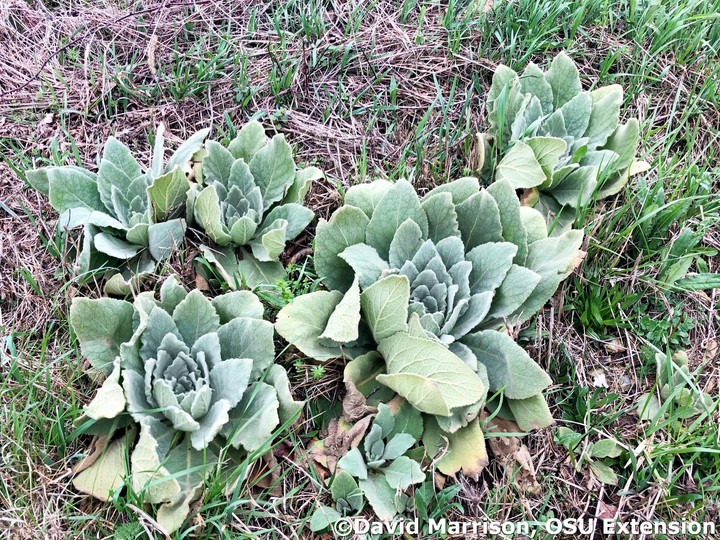 When the news broke that we would need to retreat to our homes due to Coronavirus-19, the run on milk, eggs, bread and toilet paper began at our local grocery stores.  I have been especially fascinated by the hoarding of toilet paper.  Every time I have been out to get food and supplies, the toilet paper shelves have been completely bare.

As my wife Emily and I were out taking a Sunday evening walk, I noticed along the ditches some green, soft-looking plants which appeared to be the lambs-ear plant, with which many of us are familiar.  After closer inspection, the plant we were looking at was Common mullein or Verbascum thapsus.  Emily was quick to respond that locals refer to the plant as Cowboy’s Toilet Paper.  Then the light bulb went off---could this be Mother Nature’s answer to our COVID-19 toilet paper shortage?

Besides Cowboy’s Toilet Paper, you may have heard it referred to as Quaker’s rouge, candle wick, flannel leaf, velvet dock, big taper, bunny’s ear, miner’s candle, or poor man’s blanket.  These names commonly reflect some characteristic the plant exhibits, such as the flower stalk or leaf texture.  If you read survival guides, this plant is mentioned as an emergency roadside toilet paper due to the large, fuzzy leaf of this botanical wonder.  One word of caution however, the fuzzy leaf may cause some skin irritation when used as toilet paper.

The history of this plant is fascinating. Common mullein traces its roots back to Europe as it was planted in gardens for its medicinal purposes as an expectorant, diuretic, pain relief and healing of abrasions.  Interesting enough, since Quaker women weren’t allowed to wear make-up, they would rub the hairy leaves on their cheeks to create a homemade blush look.  Hence the name Quaker’s Rouge.  However, its major claim to fame is definitely its use as a toilet paper.

Like many plants, it escaped the confines of cultivation and is now a weed which can be found across the United States.  In Ohio, we tend to see it in disturbed areas such as railroad right-of-ways, roadsides, fence rows, ditches, and pastures.  In fact, it is one of the first weeds to germinate when an area is disturbed.  It prefers sunny, hot, dry conditions.  It grows quicker than native plants so it can quickly take over a newly disturbed area.  Common mullein is a minor problem in cropping systems because it is unable to survive cultivation and is intolerant of shade.  However, it can persist and remain problematic in overgrazed pastures due to it generally being avoided by livestock.

Common mullein is a spring-germinating biennial. In the first year, it produces a large basal rosette (7 to 24 inches) of large, furry leaves with a substantial crown. The leaves are covered by dense hairs, making it similar to felt fabric.  Those hairs make it very undesirable to livestock and wildlife that might feed on the foliage of the plant. The rosette overwinters, and in the second year, it produces a single, thick, erect flowering stem with yellow flowers reaching upwards to 5 feet in height.

The flowers are present from June through September.  The flowers are sessile on 1 or 2 terminal cylindrical spikes (7-19 inches in length by 1 3/16 inches wide).  Individual flowers are just under 1 inch in diameter and have fused yellow petals with 5 lobes.  A single plant can produce up to 175,000 seeds and those seeds can remain viable up to 100 years. The seeds have wavy ridges alternating with deep grooves that resemble corn cobs.  The seeds are typically 1/32 inch in length. After flowering, the plant dies leaving the tall stem and the dead stems can persist for more than a year.

Common mullein is difficult to eradicate once established, due to its long-lived seed bank, but there are several options for management. One simple method is to ensure good open space competition by encouraging good groundcover, since this weed is one of the first to germinate in bare ground. Hand pulling is an effective method, if plants are pulled before seed production. Similarly, removing plants with a hoe, making sure to cut through the crown, can control common mullein.

Chemically, one-year old rosettes can be controlled easily using non-selective herbicides such as glyphosate products applied directly to the plant. Greater care must be taken when applying these products to the upright, two-year old plants, in order to reduce drift onto non-target plants.  It is important to use a surfactant in conjunction with the herbicide. Control with herbicide is considered difficult due to hairs on the foliage, which can reduce herbicide absorption. However, using a surfactant can alleviate that problem.  Refer to the pesticide manufacturer’s label for specific information and restrictions regarding proper herbicide use.

French author, Marcel Proust, once said “The real voyage of discovery is not in seeking new landscapes but in having new eyes.”  The coronavirus pandemic is providing us an opportunity to see the world with a new set of eyes.  As we distance ourselves socially, I encourage you to get outside and take a walk.  You never know when you will stumble across a plant like Common Mullein which could be the answer to our toilet paper shortage!