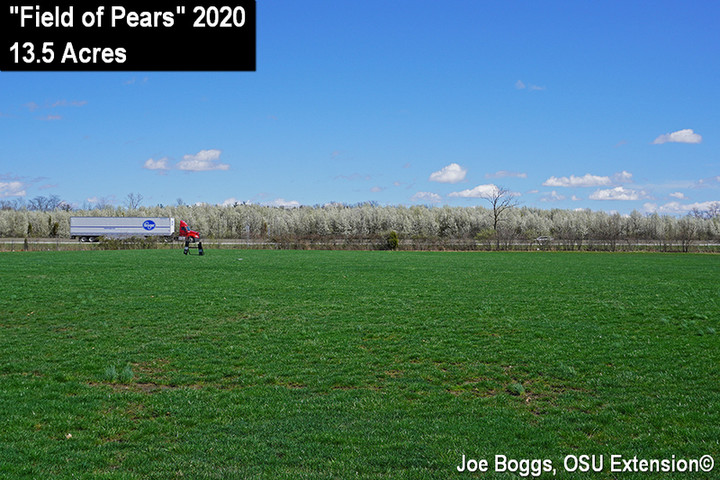 Last year, I vowed not to take any more pictures of blooming Callery pear (Pyrus calleryana).  I have hundreds of pictures including some that I've labeled "Field of Pears."  It's a 13.5-acre former farm field along I-75 just north of the exit for SR 129.  The field is covered with escaped pears; no trees had ever been planted there.  I've been taking shots of the field since 2010. 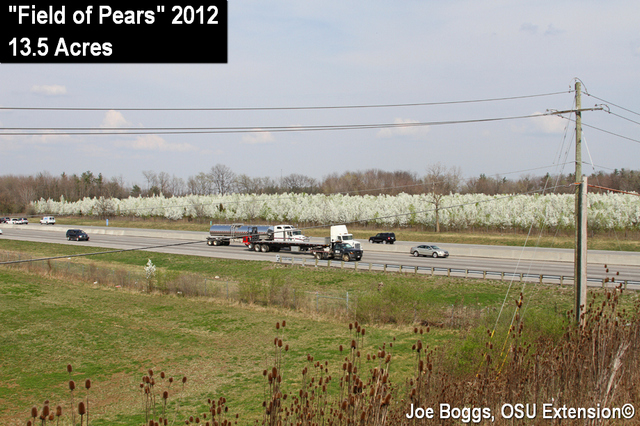 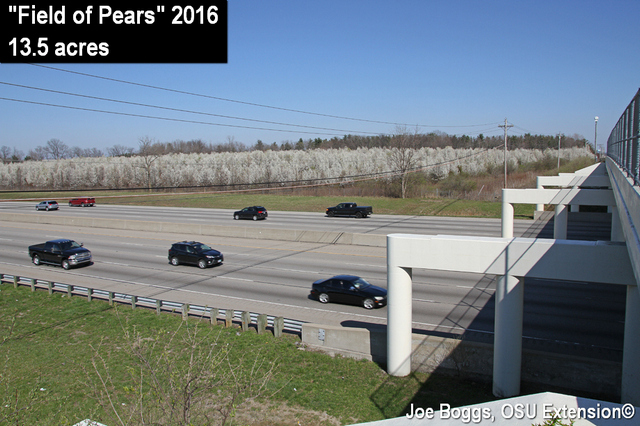 I broke my vow yesterday.  The current widespread floral display in southwest Ohio is just too dramatic to ignore.  It's one of the best blooms in years and truly reveals the Jekyll and Hyde nature of this good tree gone bad. 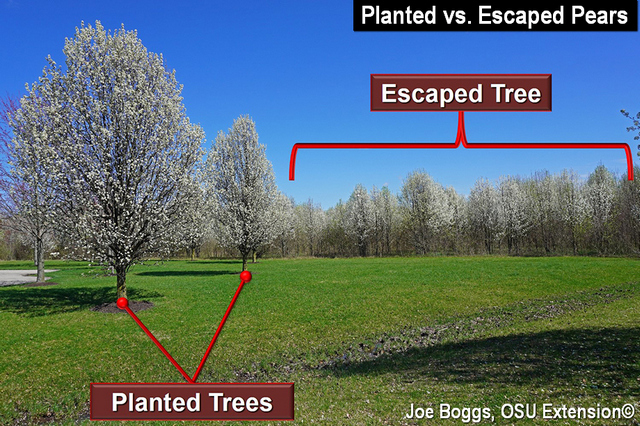 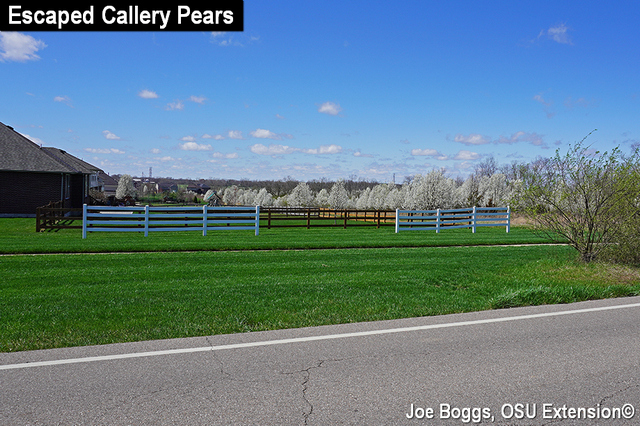 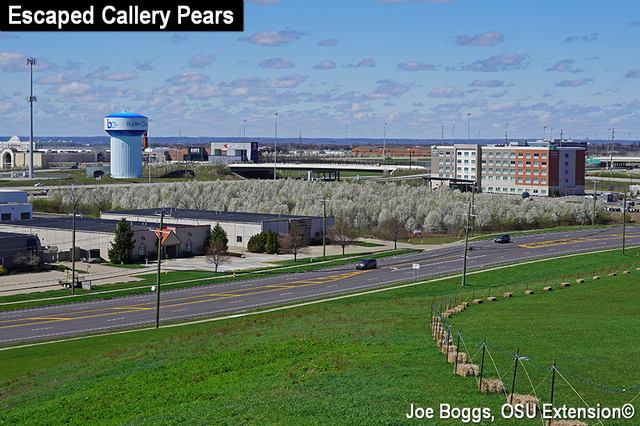 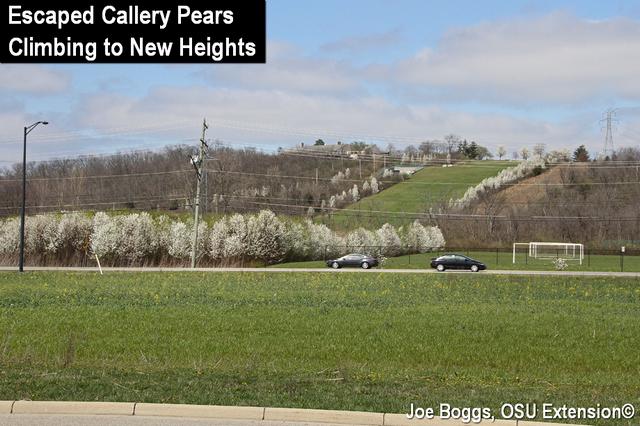 The Callery pear origin story is rife with unintended consequences at almost every turn.  It epitomizes the saying, "The road to perdition is paved with good intentions."

Callery pears are native to Asia.  The species is named for a French missionary, Joseph Callery, who first collected the tree in 1858.  As with all pears, Callery pears belong to the rose family, Rosaceae.

The original Callery pears were brought to the U.S. to provide an infusion of genes into fruiting pears with the goal to enhance fireblight resistance.  Although the crosses fared poorly relative to fruit pears, the USDA researchers made the serendipitous discovery that some crosses showed intriguing characteristics that could be of interest to the nursery/landscape industry.  The cultivar Pyrus calleryana 'Bradford' grew out of this plant breeding project and was the first Callery pear to be introduced into U.S. landscapes.  It's why many of us still occasionally lapse into referring to all Callery pears as Bradford pears.

Bradford was an immediate hit with its snowy white flowers, lustrous green leaves, glossy-red fall color, and because of genetic self-incompatibility, it didn't produce fruit meaning there was no mess.  Dr. Jekyll strongly approved. 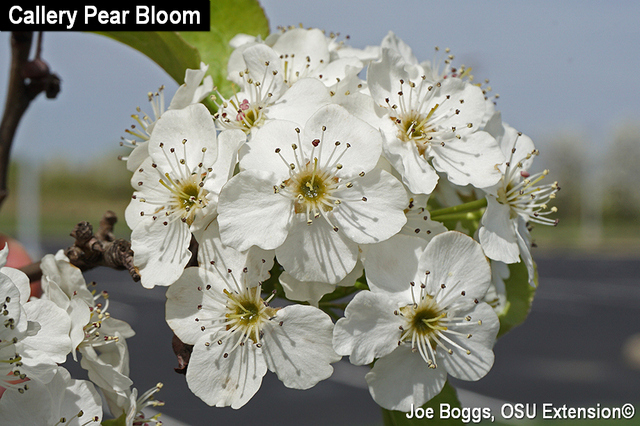 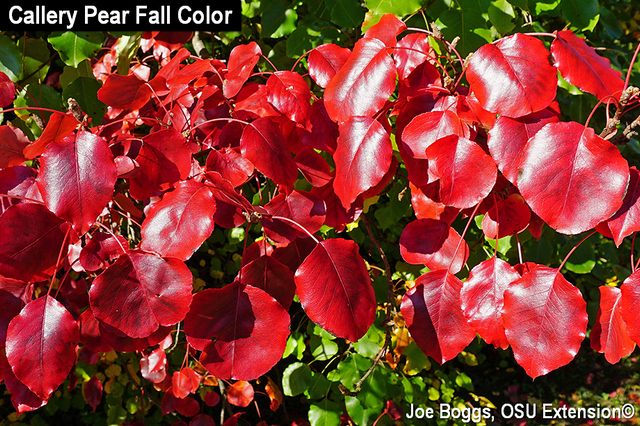 The icing on the cake was its tolerance of bacterial fireblight.  Infections seldom advanced beyond the fruit spurs and seasonal recovery was impressive.  Adding to this, the trees were tolerant of a wide range of environmental insults; it would grow almost anywhere.  Mr. Hyde was lurking on our doorsteps. 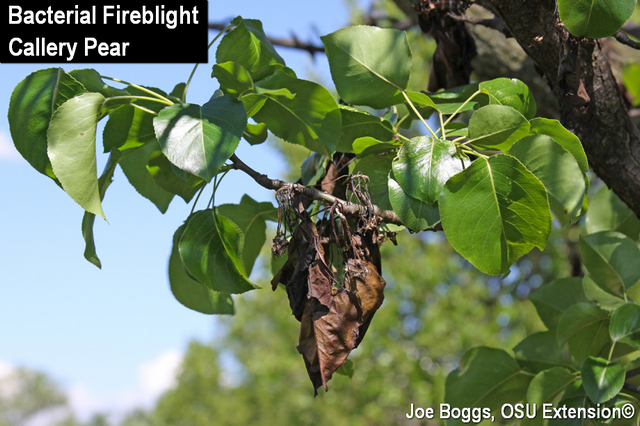 However, Bradfords revealed their Achilles heel as they matured.  Arborists noted that the crotch angles were weak which resulted in a lot of storm damage.  The wind damage was so common some arborists still refer to storms with high winds as "pear storms" because of the added cleanup.  Soon, many street tree commissions demanded "no more pears." 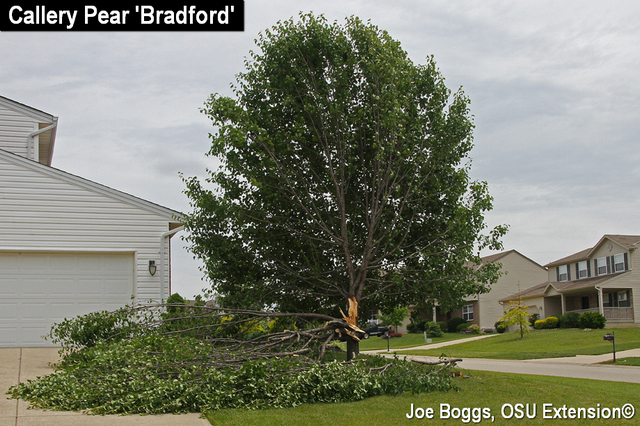 Of course, in an early manifestation of "we have an app for that," many (including me!) came to the defense of Callery pears by noting that newer cultivars such as 'Aristocrat' and 'Cleveland Select' had better branch structure.  We said don't throw the baby out with the bathwater.  Callery pears were the "go-to" tree for locations where other trees failed to establish and thrive.  Fast-growing pears planted in Devil's strips quickly produced tree-lined streets. 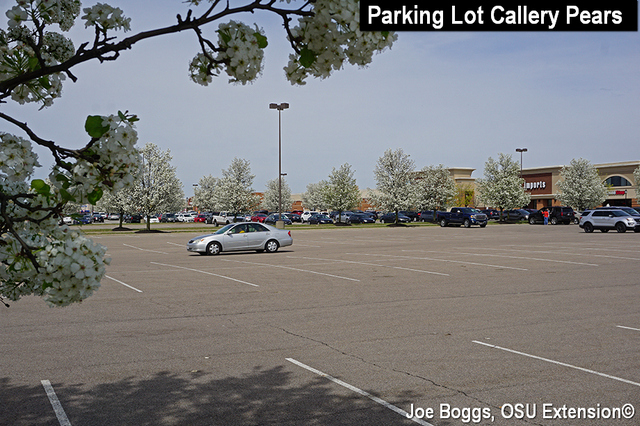 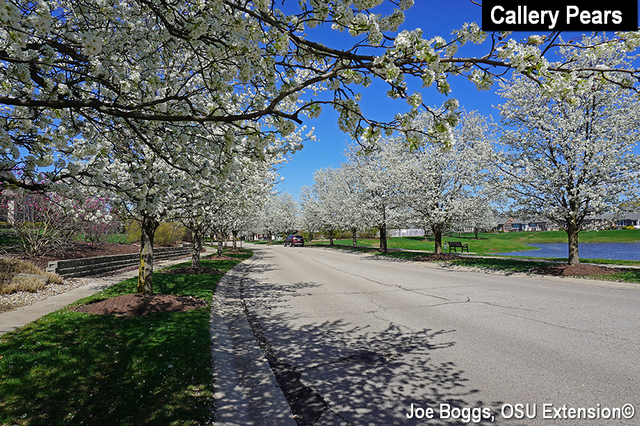 However, many began to note that the "no fruit" feature of Callery pears appeared to be changing.  More and more fruits were showing up on the trees.  They were generally treated as oddities and we were mostly concerned with the increased mess beneath heavily fruiting trees.  We didn't recognize the fruits were a sinister portent of things to come. 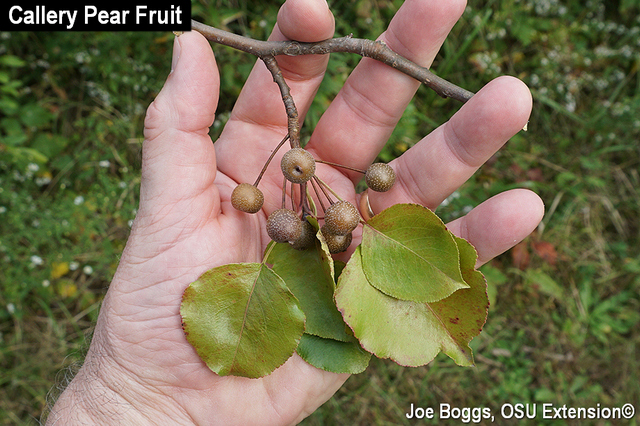 Teresa Culley (Professor, Department Head, Biological Sciences, University of Cincinnati) reported exactly what was going on in her ground-breaking paper, "The Beginning of a New Invasive Plant: A History of the Ornamental Callery Pear in the United States" published in 2007 in BioScience (see More Information below).  Teresa would play the role of Gabriel John Utterson in keeping with Robert Louis Stevenson's Strange Case of Dr Jekyll and Mr Hyde.

'Bradford' Callery pear was still largely self-incompatible.  However, Teresa established that other cultivars originating from slightly different plants (e.g. better branch structure) and then cloned, were crossing.  Birds were then eating the small fruits and pooping out nascent pears far beyond the parent trees.  Thus, Callery pears began to populate road right-of-ways, abandoned fields, and many natural areas including wetlands. 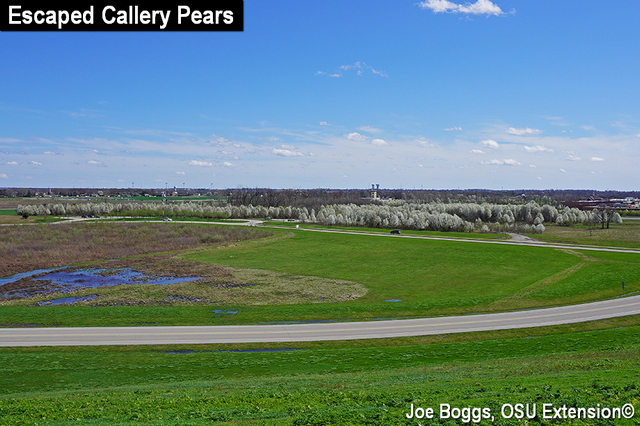 Driving Ohio's highways this spring will reveal the genie is truly out of the bottle.  Escaped trees are simply too widespread and too well established for Callery pears to be wiped away particularly with the continued infusion of new seed from the many housing developments, parks, towns, and cities where the pears represent a significant portion of tree plantings.

Many of us of a certain age played an unwitting role in the pear trajectory; we recommended their planting.  Of course, hindsight is 20-20.  On the other hand, the plight of the pears can also serve as an effective educational cautionary tale. 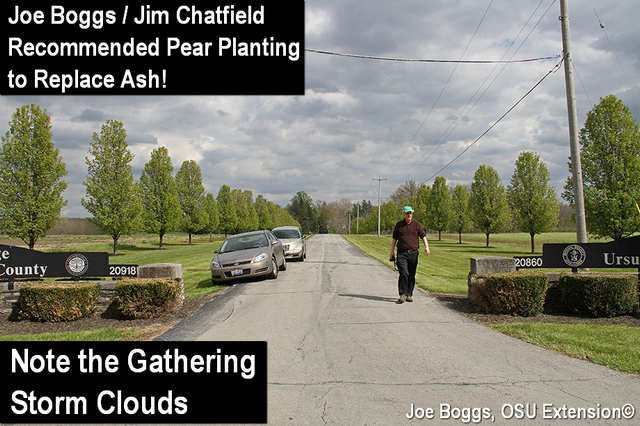 As I was taking pictures yesterday of an impressive bloom display lining the entrance to a housing development, a couple out for a walk asked what I thought about their "beautiful trees."  I answered that beauty is in the eye of the beholder; hoping they didn't notice the nervous tick at the corner of my right eye.  I then launched into the full "Pear Story." 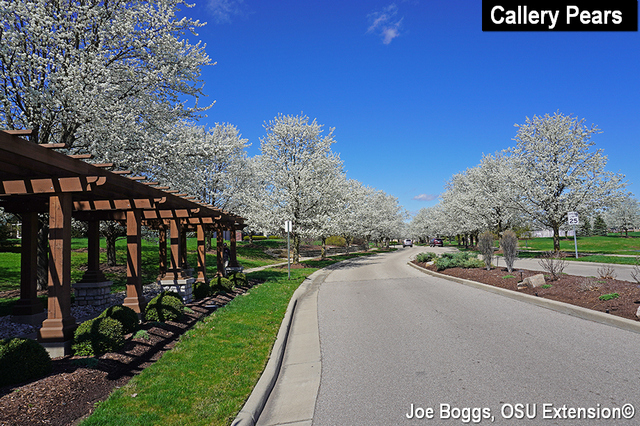 When I got to the point about Callery pears escaping their landscape confines to spread into surrounding fields, one of them looked past me and asked, "you mean like that?"  I turned around and saw a field across the road full of itinerant pears and answered, "Exactly like that."  It was a satisfying educational moment. 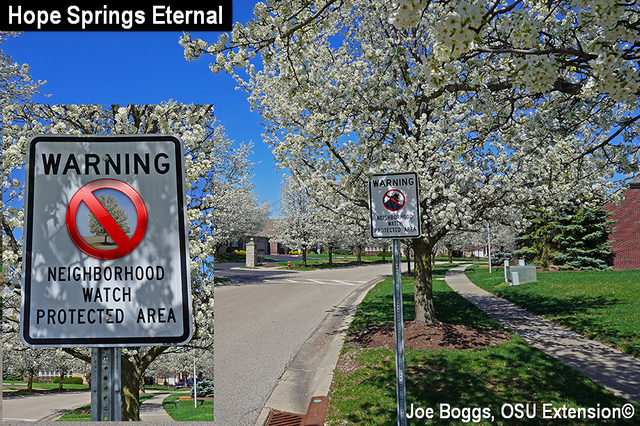