Squirrely - and Other Behavior 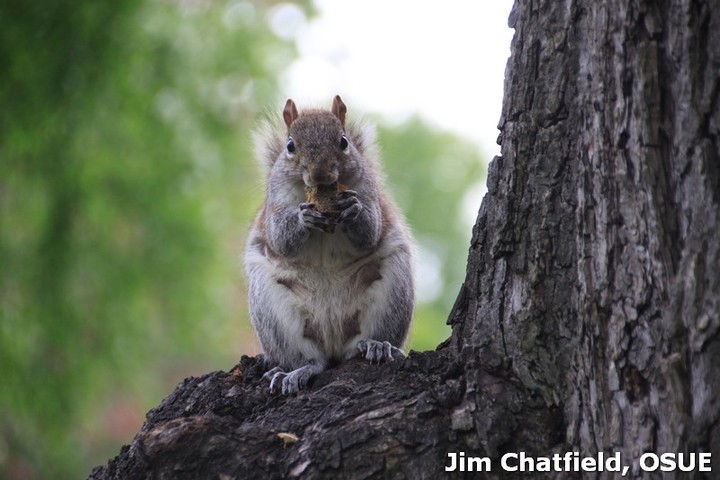 First, Something Entirely Different.  This from someone we have all come to know and love from our various news feeds: Amy Acton, the Director of Health for the Ohio Department of Health, earlier this Saturday afternoon, strongly recommended (with appropriate social distancing) the crucial benefits to our health right now of:

After reading the recent bygl-alert “Bark Stripper Squirrels” (https://00bygl.osu.edu/index.php/node/1466), I realized I wanted to get in on squirrel talk. We ourselves may all begin exhibiting squirrely behavior soon enough. The following example reminds us, as we digest medical and epidemiological studies like never before, that we need to take care in interpretations and in defining our terms.

Since BYGL-Writers work in the science-based fields of horticulture, botany, plant pathology, entomology, natural resources, etc. we enjoy keeping myself and others on their toes relative to these information interpretations.  A factoid I have enjoyed using recently is from a set of essays “A Naturalist At Large: The Best Essays of Bern Heinrich”.  It was from “Nutcracker Sweets”, published in the excellent popular nature magazine ‘Natural History’ and concerns the squirrely behavior of Tamiasciurus hudsonicus – the red squirrel.

Heinrich details the behavior of said squirrels in the winter on his Maine farm, gracefully scaling the trunks of maple trees, with preference for sugar maples, making little incisions, inducing sap flow, then moving on, returning sometime later to lap at the incisions. He deduces that they are after the sugar in the sap, with the gap in time of their visits resulting in evaporation of water and higher concentrations of sugar. Squirrels with their natural maple syrup evaporation system!

Cool stuff.  Heinrich then makes an interesting statement: he says that research shows that red squirrels have high energy needs in winter, in fact consuming an average of 117,000 calories a day. Huh?  Even I, weighing approximately 100 kilograms could only imagine eating that many cheeseburgers and donuts daily and red squirrels only weigh a pound or so. What gives – can squirrels really eat that much? Pause for a moment.

Have you given it some thought? Aha, 117,000 calories is really only 117 kilocalories (kCal) and it is kilocalories that we mean when we speak of calories, for example, in our diets. So, a small “c” calorie is only 1/1000 of what we think of as a large “C” calorie or kilocalorie. 117,000 calories are only 117 kilocalories. I did find a scientific article suggesting this 117 kCal number for red squirrels is realistic for certain times of year tough a little high. A lot of grains, seeds and buds of trees hazelnuts, spruces, and other tree seeds. Citing the 117,000 calorie figure in the essay differently or with more translation would have increased communication clarity, but – would be less fun for us.

Now for more of the story, including a side of squirrels (no, not for me, especially no squirrel brains) I had never known before, from Marne Titchenell, OSU Extension’s Wildlife Specialist:

“Jim, I was just talking about red squirrels in your class today, Jim (great group of students, by the way)! We were talking about their [not my students] carnivorous side (bird eggs, nestlings, and in other parts of the country – young snowshoe hares)! They are primarily granivorous, however. Though in the Cascade Mts they’ve been documented eating over 45 species of mushrooms!

Calories per day varies dependent on season; in the fall as they prepare for winter they are consuming richer foods to build up fat reserves. During winter, they are eating twice as much to keep body temps up. One of my books said – “non-reproducing red squirrels expend 165-240 kJ/day,” which would be what…almost 40-60 calories/day.”

Note: Speaking of rodents, including ground squirrels, and more directly of infectious diseases, I recently read a fascinating book, “Black Death at the Golden Gate: The Race to Save American from the Bubonic Plague” (2019) by David K. Randall. It is about the plague in the late 19th century and early 20th century in San Francisco (the second time a resurgence after the San Francisco Earthquake in 1906), with some additional cases in Los Angeles County in the later outbreak.

The story is different from our current infectious disease dilemma, of course. The pathogen was a bacterium (Yersinia pestisa) rather than our current coronavirus (SARS-CoV-2). There were rodents that harbored human-biting fleas as the source of spread for the plague, which is very different from the current COVID-19 disease. There were many less cases and death with that outbreak of the plague than with our COVID-19 problem, though the plague pathogen was much more virulent for individual cases, and of course, more horrific overall historically.

What is relevant for today, however, is the detailing of how information spread and was denied and became part of economic and political narratives at a time when the San Francisco and California officials were very concerned with the economic effects of the disease. The world and the nation were also just at the dawn of understanding infectious disease and the germ theory of disease emerging from the 1870s on.

Public health service doctors and officials were often dismissed at the time, after all they were looking at invisible-to-the-naked-eye pathogens, looking into microscopes, how odd!. The blame game was part of the narrative as well. There was a much more massive plague epidemic in Asia earlier, and sailors from there to Hawaii, which resulted in the burning down of the Chinese community there, then made it to San Francisco on ships.

The Chinese and their poverty conditions in San Francisco then resulted in many saying that it was just a problem of Chinese, though clearly others were also infected and dying. Some people comfortably said it would only affect the Chinese, and perhaps other immigrants such as Italians. In the second wave in San Francisco, with rubble from the earthquake providing hiding places for the flea-infested rats, communities throughout the city were affected – except Chinatown.

Public health sanitation measures (such as raising structures off the ground) had been enacted in Chinatown during the earlier outbreak and that community did not have cases the second time around. A third outbreak occurred in the countryside with another rodent, the California ground squirrel (Otospermophilus beecheyi) being the source for the flea vectors of Yersinia pestis.  BTW: There are 62 species of ground squirrels, defined as squirrels living in the ground rather than trees. Again, a fascinating book.

And, remember, you can find so much on the web.  I was actually able to read a paper titled “Plague among the ground squirrels of California”, by Wm. W. Wheeler, in the December 18, 1908 edition of The Journal of Infectious Diseases.

Final Note: Now that we are talking about animals, another shout out for Marne Titchenell. The other night about 1:30am, channeling my night owl habit, I heard the hooty calls of an owl. This is not unusual that time of night in my farmhouse neighborhood, and it never fails to thrill me, but the hoots came much more frequently than usual. So, I e-mailed Marne: Two owls? What type of owl? Mating calls? Territorial calls? What was going on?

“Hooty owls are usually great-horned owls. They hoot for several reasons: mating as you accurately guessed, communication between mates, and territorial defense. So which is it? Well, great-horned owls are our earliest of owl breeders, and usually mating calls are heard Dec – February. By this time, the pair is usually sitting on eggs or even has hatchlings by now. (Young may hatch as early as late February.) So I think you heard either mates communicating to one another or perhaps a territorial call. As they are sitting on eggs or caring for young right now, they are definitively territorial.

Hard to say, though, exactly what it was. For fun, you might do a search of your nearby treetops and look for nests. Great-horned owls typically use old stick nests from other raptors or crows, making the nests pretty easy to spot. Occasionally they use tree cavities. Below are some calls – give them a listen and let me know what you determine. If the calls don’t match, check out barred owls on the same site.

The Cornell link is great.  They were the Great Horned Owl (Bubo virginianus).