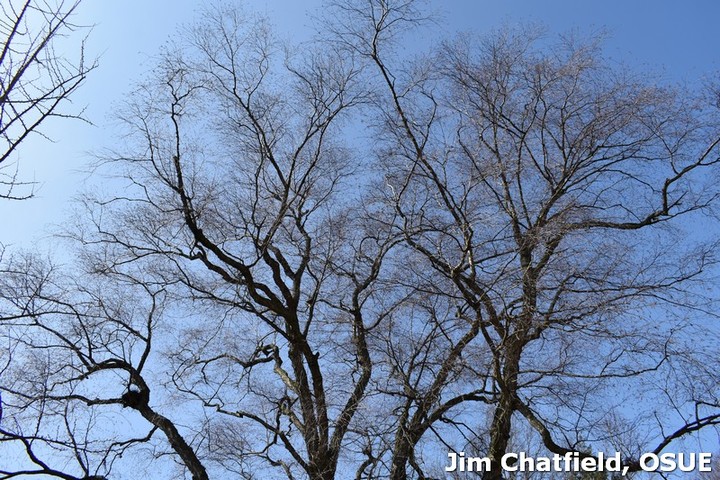 Spring moved along in the last few days at Secrest, with Growing Degree Days this past Thursday at 59, with more to come in the next few days. Remember, if the high temperature is 60, then 5 GDDs are added (60-50/2=5). We are still a way from star magnolia at 83, and may just get there before it cools next week and stays put (GDDs never go down). Check it out for your Zip Code at https://www.oardc.ohio-state.edu/gdd/CalendarView.

So what is cookin’ right now?

River Birch. The male flower catkins and twig finery of Betula nigra is always wonderful in Winter and early Spring before leaves arrive. The cinnamon and whites of young exfoliating bark is another outstanding ornamental feature. Let’s take a look at Little KingTM ‘Fox Valley’ river birch. This birch is often descried as a shrub with height and spread in the 8-10 feet range. The sample I noticed at Secrest this past Thursday was more like 15 feet tall after 10+ years at Secrest. Lovely bark, dense branching, good fall color. Prefers acid, organic soils with good soil moisture. So, a small river birch with great bark.

Marcescent Beech Leaves.  Lovely, but coming to an end soon as new leaves arrive. Though I learned of this cool word decades ago when talking to a forester in Oregon, I learned a good bit more about “marcescence” this time around. One definition from Wikipedia is “(of leaves or fronds) withering but remaining attached to the stem” and this stems from the Latin roots “marcere”, meaning to whither. We most obviously know of marcescent leaves in our part of the world from beeches and oaks, especially pin oaks, and certain maples. Other plants include witchhazels, and the increasingly planted Oriental spicebush (Lindera angustifolia). Some observers note that some plants produce marcescent leaves only when they are young.

I have asked students in my Sustainable Landscape Maintenance class over the years to present ideas on why certain plants have these marcescent leaves that persist in the fall after other leaves have fully abcissed and fallen, and then into the winter, and into spring until new leaves arrive. They have provided their own ideas and checked out the popular and peer-reviewed scientific literature.

No one appears to have provided enough evidence to seal the deal regarding evolutionary explanations, but ideas, including some new ones to me as I review article and papers include this: to protect buds from foraging animals. This is supported by the fact that at least for many plants the marcescent leaves are on the lower branches of the plant, where foraging animals might feed. I even watched a Youtube: "Youtube.com: Marcescence (video with narration) from an R. Griffith.

From his accent and examples he is presumably from the British Isles, and he cited European beech hedges (common there) that have all marcescent leaves while non-hedged specimens have marcescent leaves only on the lower branches. He also used a pronunciation that I heard for the first time: “mark-ess-ence” instead of “mar-sess-ence”.

One source suggested that some plants that are not typically marcescent may be so if an early freeze interferes with normal leaf drop.  I think I have seen this in some Autumns and early Winters on Callery pears. Other ideas include: marcescent leaves falling at the base of the tree in spring may add a useful mulch then, leaves that trap snow that then melts and provides moisture at times other than would be available from other soil moisture, protection of leaf buds from drying out, etc.  All fascinating. Doing this bygl-alert also led me to find the cool ARBlog from Harvard’s Arnold Arboretum and Nancy Rose’s “When Leaves Don’t Leave”.

Hickory Phomopsis Gall & Horned Oak Galls. While walking to the north of Secrest proper this week in the area cut off by a highway in the 1980s, my wife and I  came upon a shingle oak (Quercus imbricaria), with marcescent leaves, and large golf-ball sized galls caused by the horned oak gall wasp (Callirhytis cornigera). Last week in the midway of the Arboretum overlooking the Streeter Amphitheatre, I noticed similar-looking woody blobs, a bit larger, some more than 2 ½ inches in diameter. These were galls of a very different sort, Phomopsis spp. fungal galls – on hickory.

How can you tell the difference? Well, obviously the oak galls were on – oak, and the Phomopsis galls were on bitternut hickory (Carya cordiformis). I have had a good bit of fun over the years leading even arborist groups up to the hickory and asking what the hundreds of large galls were on this tree. Almost always, except if there is a ringer or second-timer, they say horned oak gall. Then we have fun with plant ID.

In addition, cut open the galls: the fungal galls are just unorganized tissue to the naked eye. Some insect galls, when you cut them open will have larvae of the insect that induced the gall, though often not, and sometimes there are even other insects that had nothing to do with what induced the gall. But even if insects are not present, with horned oak gall eventually horns may protrude through the gall and contain a larva that eventually becomes a female insect.

Joe Boggs and I have often spoke of these galls and used them at plant diagnostic workshops and bygl-alerts (e.g. “Woody Phomopsis Galls” https://bygl.osu.edu/index.php/node/1261 ) One errant statement I have often made is that these Phomopsis galls on hickories are very uncommon. To me, anyway, as I have seen them only on this tree at Secrest and one other location.

But this is apparently not true, at least in other areas. In a small search on the web I noted that they are listed as common in Minnesota, Wisconsin, Illinois, and New York, sometimes listed as the most common gall in Wisconsin. Phomopsis galls (there are hundreds of species of the fungus), occur on a number of woody plants, including forsythia, maple, blueberry, and – oak.  Now that would be fun at a diagnostic workshop, if we included a Phomopsis gall on oak in the Diag-mosh-tics pit! As ever, much to learn.

I was planning on including a number of evergreen sitings, especially in the “other” Land That Time Forgot Secrest, accessible by a bridge over the bypass or more daringly via the culvert hell-mouth (for Buffy the Vampire Slayer fans) under the bypass.

But this bygl-alert is already long enough, so for now, we will simply leave you with the current look of the Secrest Weeping White Pine Arch.