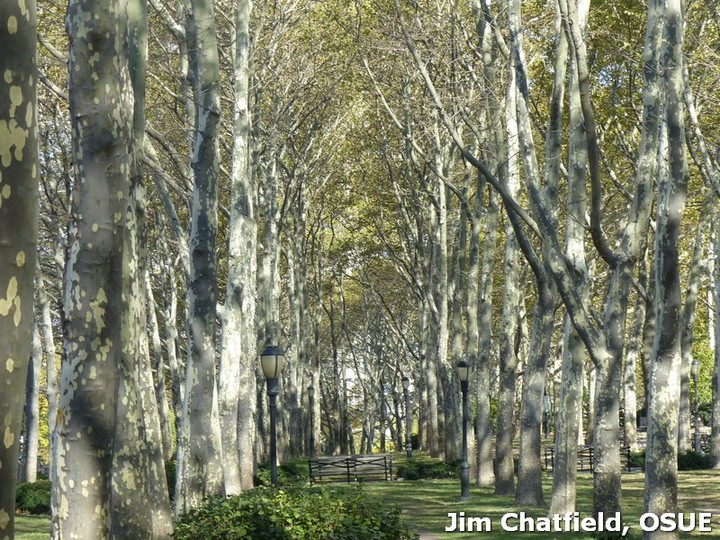 Q1. - What is the difference between sycamore and London planetree?

A1.  – Sycamore (Platanus occidentalis) is the American planetree, while London planetree (Platanus xacerifolia) is a hybrid with the Oriental planetree (Platanus orientalis). It is thought to have hybridized at Vauxhall Gardens in London where planetrees were collected from the respective native North America eastern Europe/western Asia ranges. The London planetree hybrid became very popular in London and in western Europe for its adaptability and pollution tolerance. It is overplanted in some community forests, resulting in lack of diversity.

Q2. - Are there still other planetree species worldwide.?

A2. - It was news to me that there are two additional planetrees in the United States, Platanus racemosa in California, and Platanus wrightii in Arizona, New Mexico, and Mexico. In retrospect some of the planetrees I saw in past years in native canyon areas in New Mexico and in California were probably these other species, though I just assumed they were sycamores at the time. I did notice more star-like features of foliage and more slender stems, but this barely registered – until now, especially as I spend some time with various websites, and with “The Tree Book” by Michael Dirr and Keith Warren (2019). There is also another species, Platanus kerrii, native to Vietnam.

Q3. – How do you tell the difference between sycamore (American planetree) and London planetree?

A3. – It can often be difficult, since after all, sycamore is also now hybridizing with London planetree and new cultivars of these hybrids continue to come on the market, but there are some helpful characteristics.  First, the exfoliating bark that peels off planetrees, providing contrast (and messiness) tends to be whiter and has fewer khaki tans and greens on sycamores than on London planetrees.

Second, sycamore more generally has one fruit per fruit stalk (peduncle), while London planetree more commonly has two. Third, and this is one I think is at least somewhat reliable but not fool-proof: sycamores tend to have droopier ears at the base of the large leaves, while London planetrees seem to more often have the leaf blade flat across at the base. Don’t go to the bank with this third feature, but see if it fits and let me know.

Q4- Is there some confusion regarding the common name of “sycamore”?

A4. – Yes. The first one I learned from a bit of googling: there is a a fig, Ficus sycamorus, the sycamore fig native to Africa and Lebanon, sometimes simply known as a sycamore, or sometimes spelled “sycomore”.  It is referred to numerous times in the Bible, as in,

Psalm 78:47: “He destroyed their vines with hail/and their sycamore-figs with sleet.”

A second example I learned while in Scotland and England this Autumn. They have London planes of course, especially as street trees, but they also have a plant they regularly call sycamore – and it is not the American planetree, as we commonly say. It is a maple!  What we call sycamore maple, Acer pseudoplatanus. This is another reminder of how common names, rather than the Latin binomial, can result in confusion. The common and Latin name of this maple does relate to our name of American planetree/sycamore, as the leaves do look somewhat like Platanus occidentalis.

Some giveaways that it is a maple, though, range from the winged fruits of maple, the opposite leaf arrangement of maple, and easy on my eyes as a plant pathologist, the fact that there is considerable maple tar spot disease on the sycamore maples we saw, which were many compared to sycamore maples found in North America. Sycamore maple is native from central Europe to Ukraine and was introduced to the British Isles in the 1500s.

Q5. – So, what are some common diseases of planetrees?

A5. – Most of us are familiar with sycamore anthracnose disease (fungal pathogen: Apiognomonia veneta) with the annual (some years more noticeable than others) leaf blight and twig dieback in Spring.  The good news is that it rarely kills trees, though it seems like it early in the season. It is also good news that it is less prevalent on our London planetree street trees than on sycamore, thanks to the Plantanus orientalis parent. Keys for bad sycamore anthracnose years are cool, wet weather during leaf emergence, as the fungus overwintering on twigs has ideal ”environment conducive to disease” conditions.

Powdery mildew is also quite common on Platanus, with symptoms of leaf distortion, especially on new foliage, including leaves that emerge from buds in June after the first set of leaves may be slammed by anthracnose. This disease is primarily cosmetic and not serious relative to plant health. Both anthracnose and powdery mildew, though, contribute, along with normal shedding of bark and branch drop to an overall sense of Platanus as a “dirty tree”, especially so on sycamore.

More seriously, there are several stem diseases of Platanus, especially in the UK and Europe. Ceratocystis platani causes a “canker stain” disease, especially on Oriental planetree, with greater resistance on American planetree and intermediate incidence on London planetree, all suggesting that the pathogen co-evolved with Platanus here.  It can be a killer.

The branch-damaging Massaria disease, caused by the fungus Splanchnonema platani, causing large branch lesions has resulted in several outbreaks on Platanus hybrids in Europe in the 21st century

Well, that’s it for now. Say tuned for,,, the Rest of the Story, with five more Platanus queries on a bygl-alert tomorrow, from cultural and horticultural notes to cultivars and more “name-en-culture”.

Till tomorrow: “Goodbye to buckeyes and white sycamores” from the song “Coal Tattoo” .