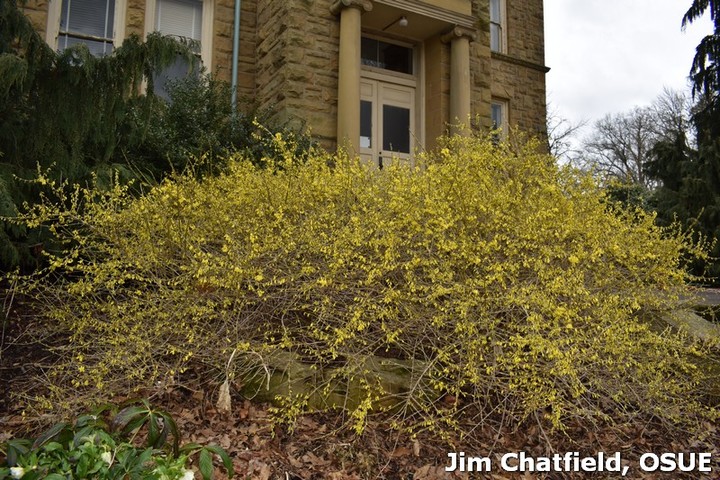 The first daylight of Spring at Secrest this past Friday brought warm, rising overnight temperatures that by midday were in the mid-60s, falling throughout the afternoon and into the 20s overnight with a windy chill on Saturday that by nightfall fell freezing into the low 20s. Time will tell if this sudden temperature drop caused damage to woody plant tissue that had awakened from winter slumber. For now, let’s take a look at plants of note Friday at Secrest.

Early forsythia flowered for the first time. Pistillate silver maple flowers reached full bloom while red maples emerged with first bloom (Growing Degree Days in Wooster’s 44691 zip code rose to 55).  A few more corneliancherry dogwood flowers pushed out. And the species Pieris japonica that was not out on Wednesday were just starting to bloom by Friday, at least for some cultivars. Common chickweed (Stellaria media) was in flower: can you tell from this picture how many petals chickweed has?

Though it looks like ten, it is really five, because chickweed like most plants in the pink family, the Caryophyllaceae, has cleft petals, deeply cleft in the case of chickweed.

The real standouts at Secrest Friday, though, were a number of conifers. They are soon to lose their winter primacy; as deciduous plants begin to leaf out in their riot of greenery, the needled evergreens will seem a bit more ordinary. This is something of a metaphor for what has happened evolutionarily to gymnosperms (“Naked seeds”), the seed plants that do not enclose their seeds inside fruits like the angiosperms, the true flowering plants.

Ferns and seed ferns occurring in the Devonian and Carboniferous and Permian periods of the Paleozoic Era (419-252 million years ago) gave way to the prominence of gymnosperms moving into the Triassic period of the Mesozoic Era, and then the emergence of flowering plants (angiosperms) in the middle of the Cretaceous period of the Mesozoic Era, by 125-120 million years ago.

This was quite the evolutionary innovation, in that seeds are multicellular instead of unicellular for spores, store more resources, and have more robust modes of dispersal. Angiosperms have some advantages over  gymnosperms, at least for now, partly due to their successful co-evolution with pollinators such as insects, resulting in great range of adaptive variation.

For now, let’s take a look at the present: a few gymnosperm of interest at Secrest this Friday.

Cunnighamia lanceolata, or water-fir (not a true fir in the genus Abies), is an uncommon one. Cunninghamia is in the Cupressaceae, the cypress family, native to China and southeast Asia and named for James Cunningham (great initials). It is a timber tree that can grow to 150 feet and more in its native habitat, but as a garden tree in North America it is a small to medium tree.

Water-firs tolerate full sun if not allowed to dry out; bronzing may occur in the winter. The seed cones have unusual vegetative shoots growing beyond the cones. Fossils do occur in North America. Attractive exfoliating bark; glossy, pointed needles. Jason Veil, curator of Secrest Arboretum comments that this tree has a “prehistoric look”.

Dawnredwood trees gave a lift when viewed spirally upward in the middle of the Dawnredwood Grove at Secrest on Wednesday. On Friday, the focus was downward, at the string of fallen fresh male cones, filled with pollen and the charming female cone left over from last year.  It will not be too many weeks before the fresh, new, soft green foliage on this deciduous conifer will emerge.

Nordmann fir (Abies nordmanniana) is a true fir, thus having upright cones and flat needles, singly attached to the stem, with two rows of white stomates on the undersides of needles and intensely glossy, dark-green upper needle surfaces. The tree was named by a Finnish zoologist, Alexander von Nordmann in the mid-1800s while at the Odessa Botanic Gardens, and this fir, also known as the Caucasian fir, is native to Turkey and the Caucasus.

It is the largest tree in Europe, growing up to but rarely 200-250 feet in height, though arboreta specimens in the U.S. tend to be in the 50 foot range at maturity. Cooler climates (the native trees tend to be in the low mountains) are preferred, so, along with many firs (one exception being Abies concolor, white fir) climate change further suggests problems with ongoing thriving in Ohio. However, las Jason points out, the large Nordmann firs at Secrest seems to be doing quite well. Can be a great Christmas tree.

Jason has an excellent idea for an upcoming future program at Secrest: a celebration of the true firs (the genus Abies) of Secrest. On a future Friday of a certain numerology (one that we just passed doubly) we will do a Friday the FirTeenth program!

Pitch pine (Pinus rigida) is a 3-needled, sometimes 2-needled pine native, I was surprised to discover, from central Maine to Georgia, and west to Ohio.  I suppose I thought of it more as a southern pine, perhaps from stories and historical accounts of tar and turpentine from resin in southern states. At Secrest it is not a widely planted pine, more there simply as part of a pine collection.

Pitch pine is, though, the primary tree of New Jersey’s Pine Barren area, demonstrating its tolerance of very acidic soil pH (blueberries also abound there). Pitch pine is adaptable to both wet and dry and does well in poor soil, though is oft replaced by oaks and other trees in more fertile soils. Fire resistant. Used for pulpwood; very knotty. As I trying to pry off a cone to take a photo I soon learned how hard and sharp-pointed the cones are – should have had pruners ready, anyway.

The Dwarf Jezo Spruce (Picea jezoensis ‘Chitosemaru’). The full-sized Jezo spruce (Picea jezoensis) is a large timber tree (to 120 feet) in its native Japan (Hokkaido and Honshu areas) and Siberia habitats.  The Secrest dwarf cultivar specimen I photographed was an early 2010s planting and was about six feet tall . Jason Veil used to grow the subspecies Picea jezo subsp. hondoensis in his nurseryman days.

He praises the glaucous blue-green foliage (the “blue” color is the light that it is not absorbed by waxy filaments of the needles). Jason describes this “cultivar” as a conical, well-behaved, semi-dwarf spruce. Jezo spruce is a close relative to the Sitka spruce, which natively holds forth on the other side of the Pacific in North America’s Pacific Northwest. And in the UK, where it was extensively planted, especially after World War II in reforestation efforts, it is a sort of post-war lend-lease from NA to the UK.

In addition to timber, in its native range Jezo, Ezo (from an old name for Hokkaido) or Yezo spruce is also used to make paper and a Japanese stringed instrument, the tonkori.

Hemlocks at Secrest include the Canadian hemlock (Tsuga canadensis) and the Carolina hemlock (Tsuga carolinana), and they have a morphological difference that make them easy to tell apart. In both cases the needles are flat (rather than the round or square needles of pine and spruce). On Canadian hemlock needles are attached and arrayed along the stem in a flat plane, while for Carolina hemlock the needles are arrayed at all angles along the twig.  This gives the branches of the tree an immediately different look.

Well, that’s it for Secrest gymnosperms for now. Stay tuned for further riots of Spring.