Crocus By Other Names 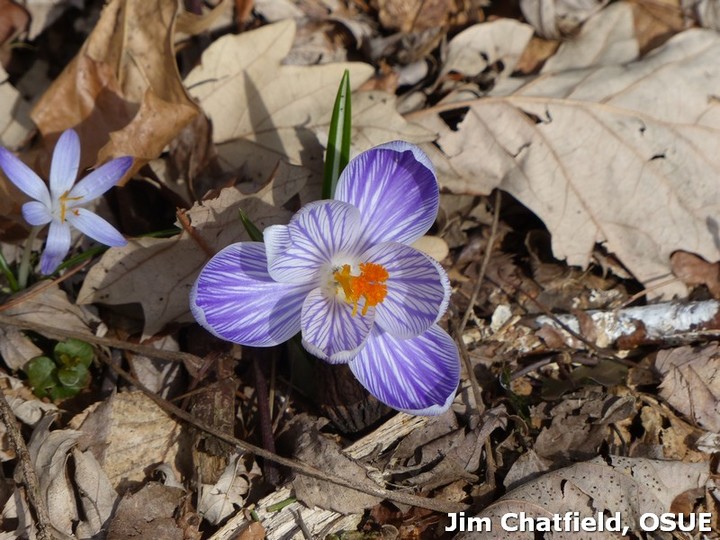 My favorite poem this time of year, evoking the rollercoaster ride and thrills of Spring, is a short one from Lilja Rogers: “First the howling winds awoke us/Then the rains came down to soak us/Now before the mind can focus/Crocus.”

I was thinking of this two weeks ago when croci were first trying to come out in northeast Ohio and I was preparing a talk on “Having Fun With Plant Families”. I had plenty of material already, but a few hours before the talk once I decided to start with this poem, I pondered, hmm, what is the family of the genus Crocus.  That started me down the garden path of learning and relearning about Crocus, including some very important distinctions.

First things first, Crocus is in the iris family, the Iridaceae. I knew Crocus was a monocot, the class of plants with single cotyledons (seed leaves), along with grasses, sedges, and more closely, lilies. But had not remembered about the Iridaceae; it is a family with over 80 genera (a family is a group of related genera) and over 1700 species.

These genera include Iris, Gladiolus, Sisyrinchium (the lovely blue-eyedgrass – not really a grass), and -  Crocus.  A distinctive feature of genera in the Iridaceae is that the male flower parts include three pollen-bearing stamens and the female flower parts consist of a pollen-receiving stigma atop the  stalk-like style, often three-parted, with the ovary at the base. Remember this.

For now. Let us turn back to Crocus. Species in the genus are native from central Europe to China, with many of the garden croci we plant and are enjoying now being the “Dutch” crocus, Crocus vernus.

The autumn crocus, Crocus sativus, is the source of saffron, the lovely golden- to orangish-yellow colored spice that is so wonderfully used in cuisine, such as the Spanish dish paella, in French bouillabaisse, and in Italian risotto.  It is also used as a food coloring, a dye, and in fabrics. Saffron threads are stigmas of Crocus sativus. Now, remember that Crocus, as a genus in the Iridaceae, has three stamens and one three-parted style.

But there is another crocus-like plant that blooms in the Autumn, and this is where I realized I was unclear about the identity and particulars of another plant that is called “Autumn crocus”. This other plant should be called Autumncrocus or Autumn-crocus to signify that it is not a true member of the genus Crocus. It is also commonly called naked ladies or meadow-saffron. It is the plant Colchicum autumnale.

I am probably not alone in a mind smerging of Colchicum autumnale this late-in-the-growing-season bloomer, with the true “Autumn crocus”, Crocus sativus, the plant that produces saffron.  They are different plants, and Colchicum is not even in the same plant family. It is a member of the Colchicaceae rather than the Iridaceae. Importantly, Colchicum autumnale and related plants produce colchicine and colchicine-related products.

Colchicine is used to treat gout and certain other medical conditions, and Autumn-crocus has been used for millenia to treat for swollen joints. According to Wikipedia, with medical references cited and checked, colchicine available generically in the UK by the National Health System was available in 2019 for just over 7 pounds in cost for a month’s supply; in the U.S. the wholesale cost for that supply is just over $250.

Colchicine is also a mutagen long-used by plant breeders to produce tetraploids and octoploids (multiples of chromosomes) resulting, for example, in double flowers on crabapples. Colchicine used for medical conditions is a classic case of “the dose makes the poison”; it is highly toxic if used therapeutically at even mild dosages in excess of recommended rates. Some have also posited it could be a carcinogen and with other developmental and reproductive toxicities, but the verdict is unclear.

Colchicum is a genus with over 160 species. Colchicum autumnale is native to Great Britain and Ireland. The Colchicaceae has 15 or so genera (there are always arguments among classifiers) and over 280 species.  Other genera in the family are less well-known, but include Ornithoglossum and Iphigenia.

So, now I certainly know more about Crocus and hope you do too. Finally, for fun, while putting this together, I also found some additional quotes and poems about croci. Ah, Google.  From AZ Quotes: for “Crocuses”

“You might think that after thousands of years of coming up too soon and getting frozen, the crocus family would have had a little sense knocked into it.” – Robert Benchley

“And all the woods are alive with the murmur and sound of Spring,
And the rose-bud breaks into pink on the climbing briar,
And the crocus-bed is a quivering moon of fire
Girdled round with the belt of an amethyst ring.” – Oscar Wilde. 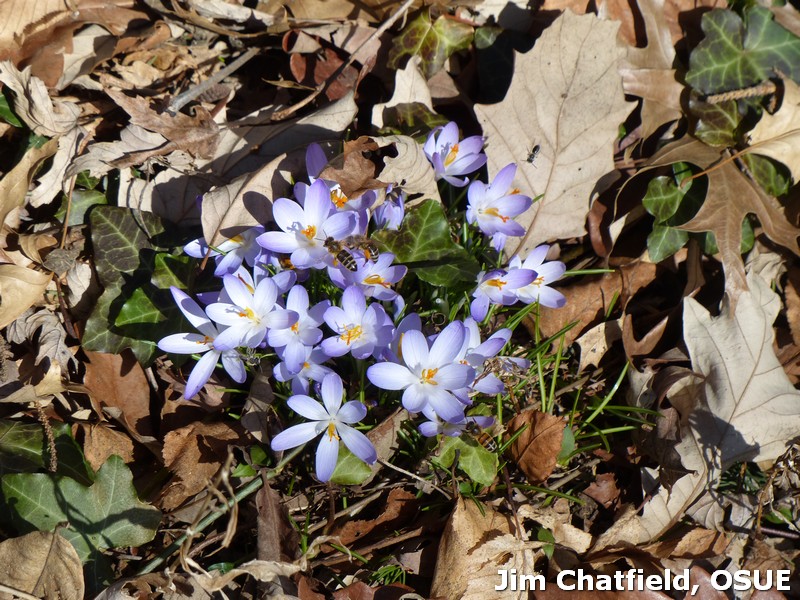 “A single crocus blossom ought to be enough to convince our heart that springtime, no matter how predictable, is somehow a gift, gratuitous, gratis, a grace.”  – David Stedindl-Rast.

“The bed of flowers
Loosens amain,
The beauteous snowdrops
Droop o'er the plain.
The crocus opens
Its glowing bud,
Like emeralds others,
Others, like blood.
With saucy gesture
Primroses flare,
And roguish violets,
Hidden with care;
And whatsoever
There stirs and strives,
The Spring's contented,
It works and thrives.”