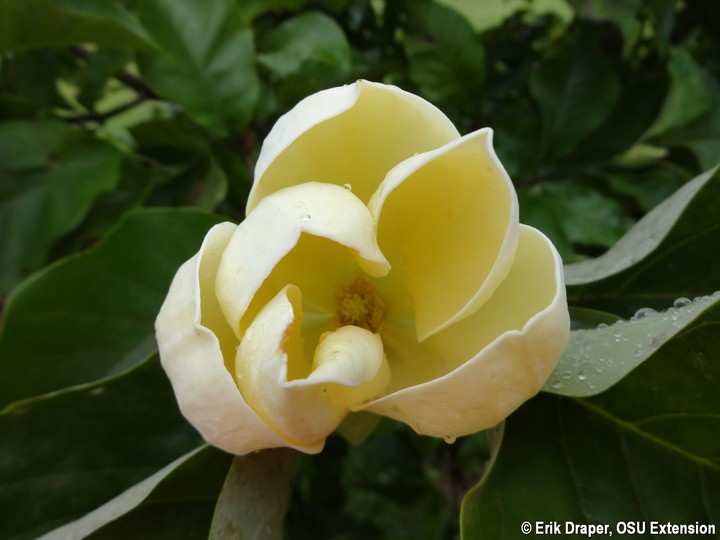 Plant blooms are the typical focus as we progress through a growing season, but people become panicky when plants don’t perform how they normally do.  It’s the time of year that concerned citizens call in wondering whether or not their magnolias or rhododendrons are signaling they are going to die.  When asked why they think that the plants are going to die, the response is always the same, “because they are blooming again and they already bloomed this year!”

The official term for this strange behavior of plants blooming twice in a year, when that is not typical, is “remontant”.  Therefore, remontant is another name for what we term “reblooming” plants.  These plants will bloom in their normal season and bloom cycle time frame, and suddenly an unexpected second set of flowers appears later in the season!  In the landscape world, remontant plants are extremely desirable and this reblooming trait in new hybrid plants is intentionally selected for and sought out.

Remember that plants like magnolias, rhododendrons, forsythia and even crabapples, will set bloom for the next year, during our current growing season.  It is the formation of those blooms for next year, which often contribute to remontant tendencies of certain plants.  The blooms must be formed and are ready to go by the time the plants shut down for winter.  With this “ready to bloom” approach, some plants after a strong growth phase or pause or a significant stress, seem to determine “I’m not waiting any longer… IT’S BLOOM TIME” and emerge.

Although we can admire that out-of-season bloom, bear in mind that if that specific, individual flower blooms now, then that specific, individual flower will NOT bloom again during its typical bloom time the following year.  A downside of remontant blooms is a slight reduction in overall flower numbers for the next year’s floral display, depending on the number of flowers that actually bloomed out of season.  Rarely will remontant plants be totally without any flowers during their typical bloom time.  So, just get out there and enjoy that “wacky, blooming plant”!