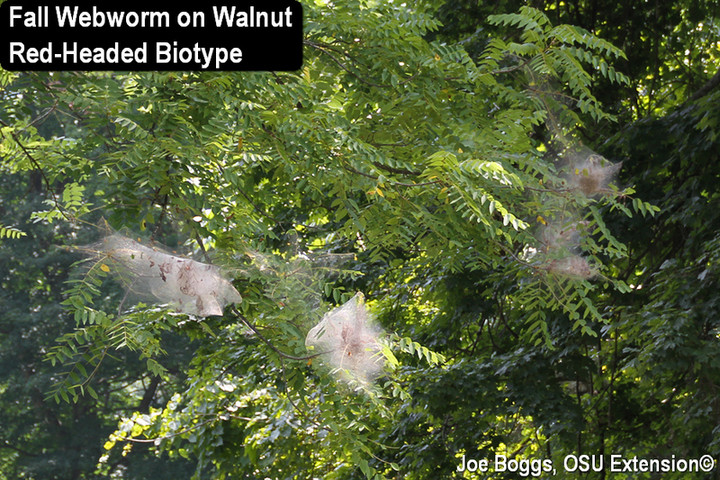 Participants at yesterday's Greater Cincinnati BYGLive! Diagnostic Walk-About observed second-generation Fall Webworm (Hyphantria cunea) nests on a number of hosts including baldcypress (Taxodium distichum).  All of the nests were relatively small and populated with 1st or 2nd instar caterpillars. 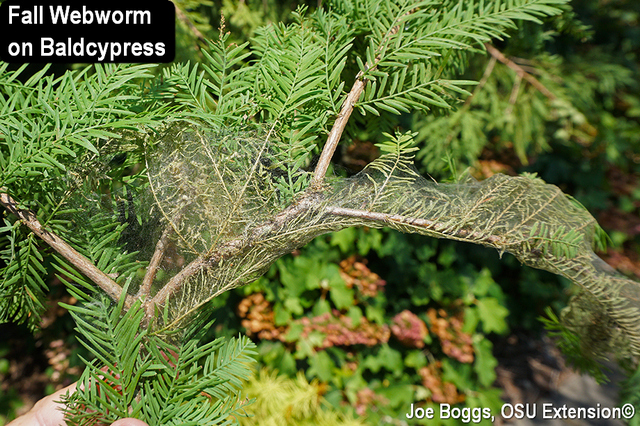 Fall Webworm (Hyphantria cunea) has two generations per season in Ohio.  The "fall" in the webworm's common name is based on the appearance of maximum-sized second generation nests late in the season.  The first generation began to appear in southern Ohio in late May (see, "Rise of Fall Webworms" posted on June 2:  https://bygl.osu.edu/index.php/node/1292 ).

This native moth has a very wide host range.  The caterpillars have been recorded on over 400 species of trees and shrubs; they are particularly damaging on fruit trees. 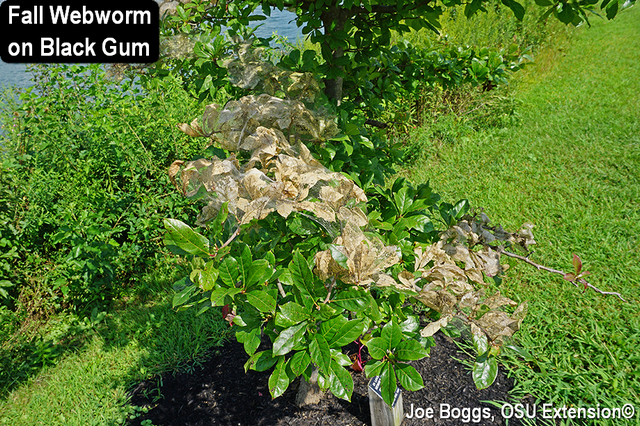 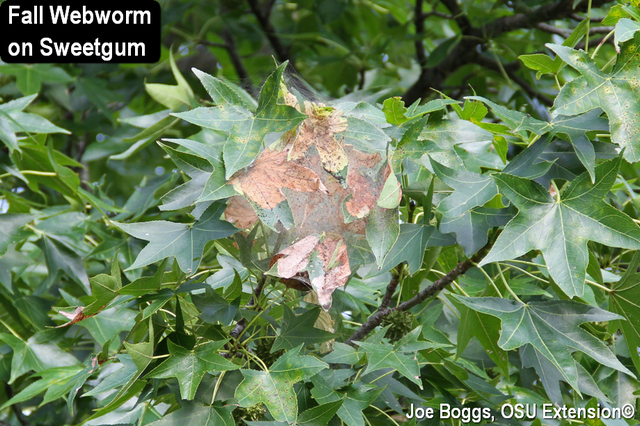 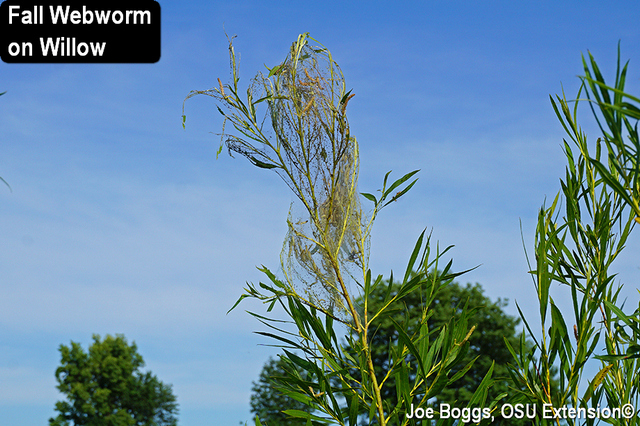 Fall webworm caterpillars feed in groups beneath their protective webbing.  They only eat leaves that are enveloped by their silk.  Early instars feed as skeletonizers on the upper or lower leaf surfaces consuming everything except the opposite leaf epidermis and the leaf veins.  Skeletonized leaves turn brown making their nests even more obvious.  Later instars eat everything except the largest leaf veins. 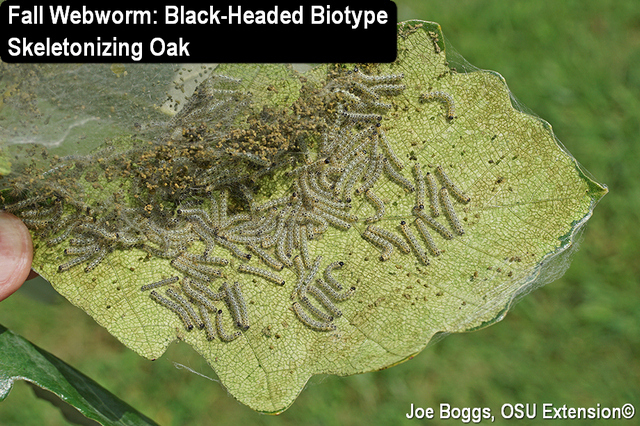 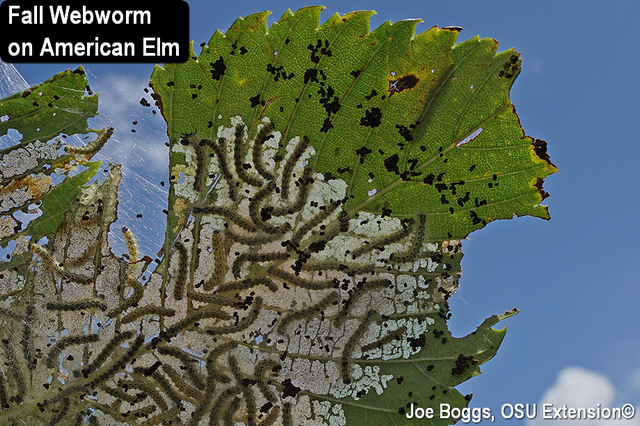 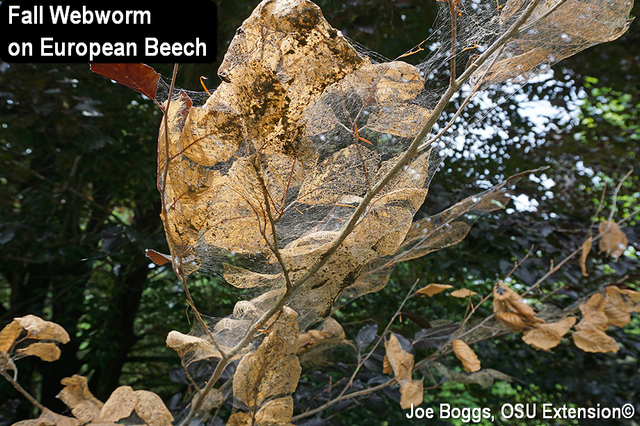 The ultimate nest size depends on the webworm biotype.  Fall webworms come in two distinct forms, known as biotypes:  black-head and red-headed.  They are so-named because of the color of their head capsules. 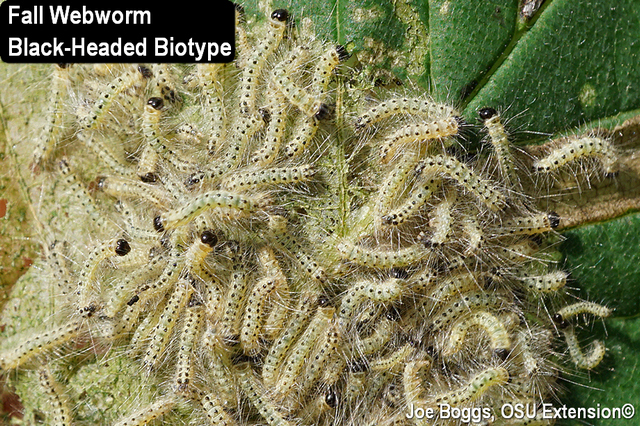 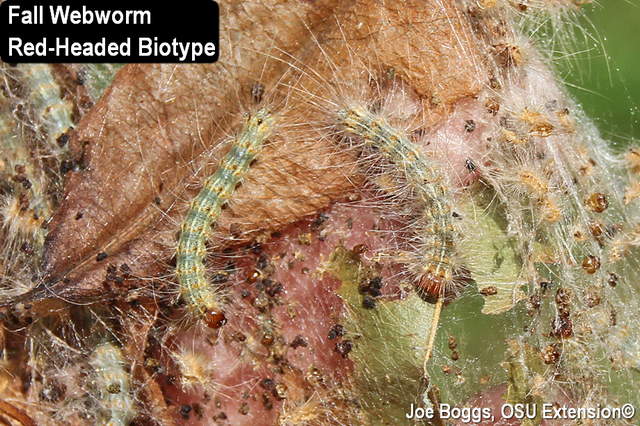 The two biotypes are more than an entomological curiosity.  Black-headed fall webworm nests appear to include caterpillars from only a few overwintered egg masses.  They tend to produce small, compact nests that envelop only a dozen or so leaves.  However, several of these small communal nests may be found on the same branch. 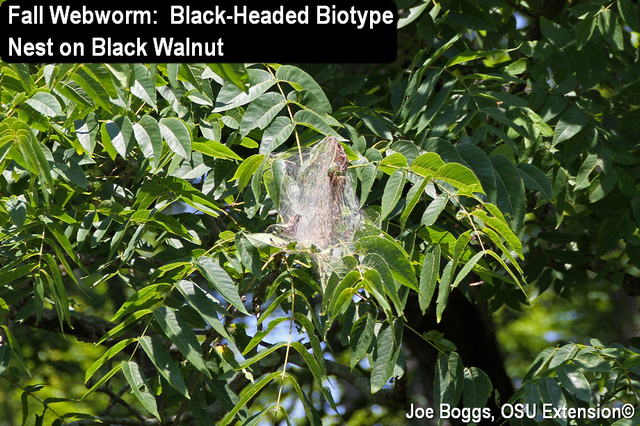 Red-headed fall caterpillars are far more cooperative; their communal nests may include caterpillars from a large number of egg masses.  Thus, they can produce some truly spectacular multilayered nests enveloping the leaves on entire branches.  This biotype is the more damaging of the two. 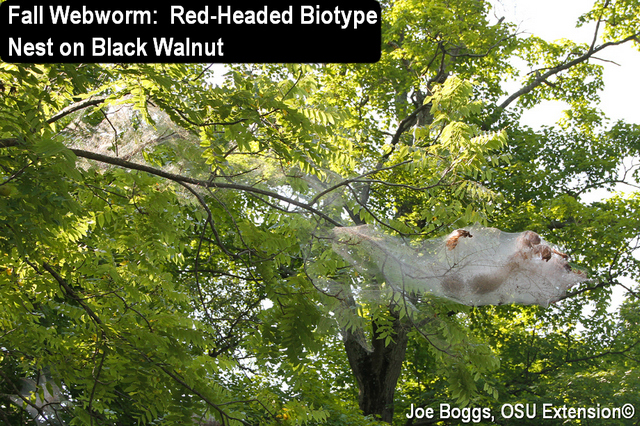 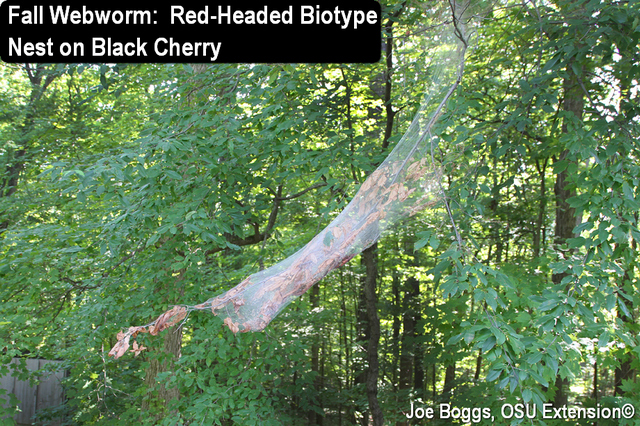 However, in 2016, I found the red-headed biotype in one location in Hamilton County near the Ohio-Indiana border.  Since then, I have found the biotype in a number of other locations throughout the county.  I have no idea whether they arrived from the north or the south, or if they've been here all along but flew below our radar.  Regardless, it means we may expect more damage in the future from fall webworms in southwest Ohio.

The insecticide option is seldom justified for these native moth caterpillars.  The webworms seldom cause significant injury to the overall health of established host trees.  Most of the damage is done by the second generation; however, their late-season defoliation occurs after trees have acquired enough carbohydrate to support next season's leaf expansion.  The exceptions may be newly planted trees if they are heavily infested, and fruit trees which require a continual flow of carbohydrate to support fruit expansion.

The second reason to avoid using insecticides is their potential negative impact on bio‑allies that help keep population densities of this moth in check.  Fall webworms are native to North America and there are over 50 species of parasitoids and 36 species of predators known to make a living on fall webworms.  They are the primary reason year-to-year fall webworm populations can rise and fall dramatically. 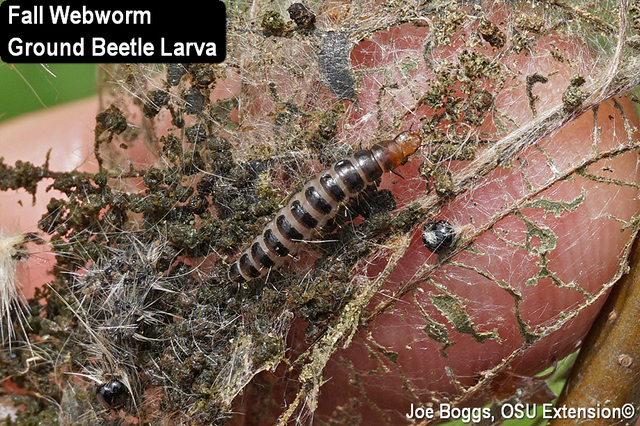 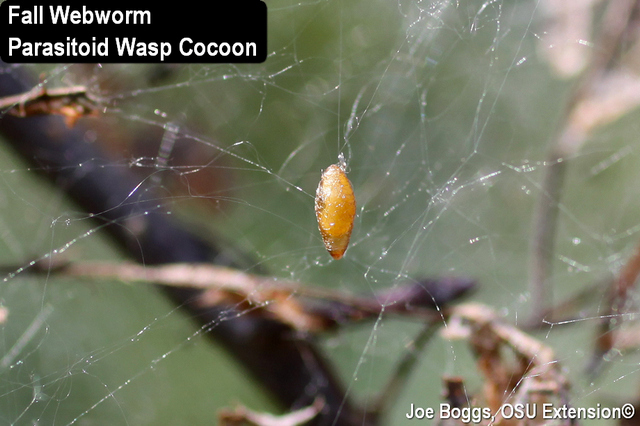 If nests are few in number and easily accessible, the best control approach is simply to physically remove the nests and then squeeze the life out of the caterpillars or do the "caterpillar stomp."  Thus far, no populations have become resistant to these Integrated Pest Management (IPM) tactics. 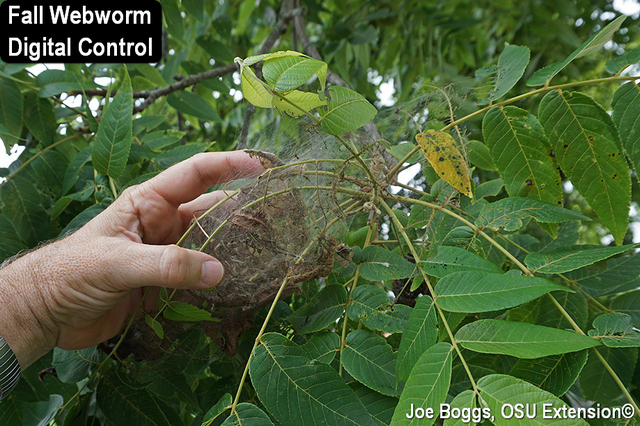 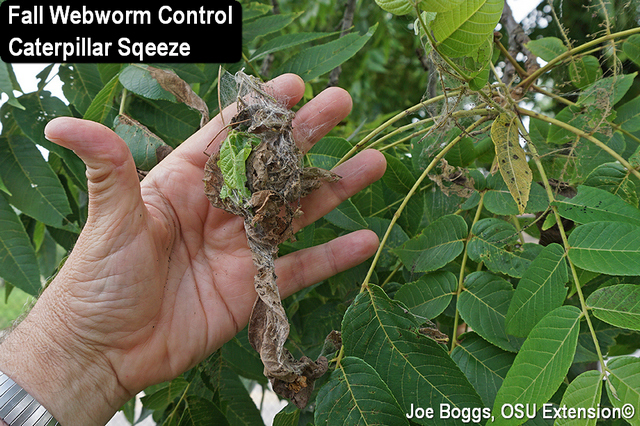 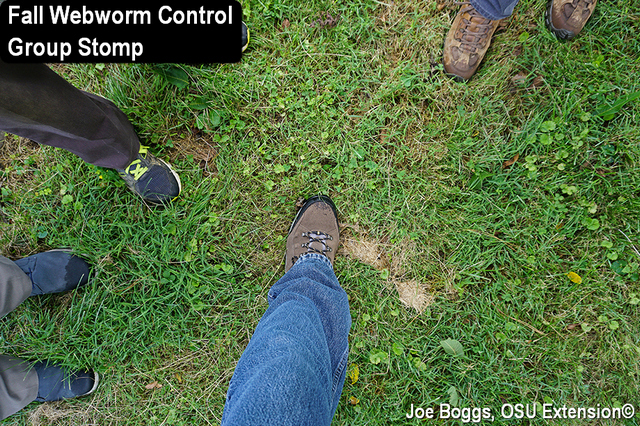