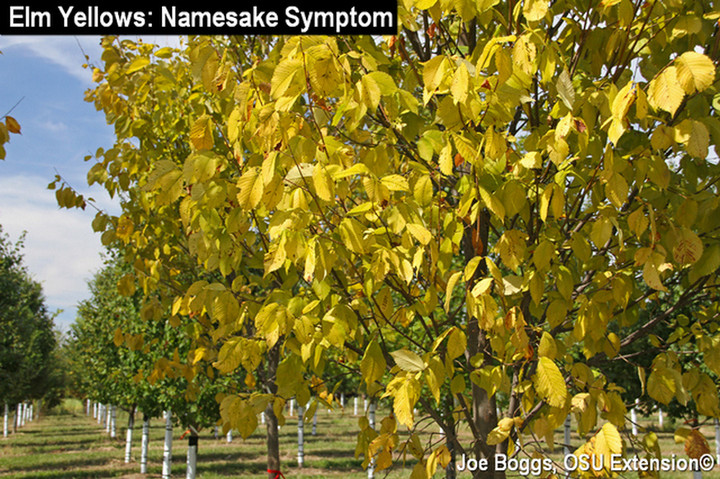 I posted an Alert yesterday that stated Elm Yellows (EY) has been confirmed by Ohio State University C. Wayne Ellett Plant and Pest Diagnostic Clinic (PPDC) in a park in Greater Cincinnati.  This not correct.

The PPDC only detected a phytoplasma in an elm sample.  However, more work is being done by the Clinic involving DNA sequencing to learn the true identity of the phytoplasma; whether or not it's actually 'Candidatus Phytoplasma ulmi' which is the bacterium behind the disease known as EY.  I jumped the gun.

What if it's an undescribed phytoplasma?  What if it's producing an undocumented disease?  What if it's the phytoplasma that's responsible for EY, but it's presenting uncharacteristic symptoms?  These points are very important relative to learning the truth of what's actually going on; a truth the PPDC is still in the process of pursuing.

In my imprudent BYGL Alert, I noted that the symptoms on the American elms were "atypical."  Instead of the leaves rapidly turning an intense shade of lemon-yellow to yellowish-orange, the symptom that gives EY its name, there was minimal yellowing on the leaves on the tree that tested positive for a phytoplasma.  The leaves rapidly wilted throughout the canopy and the entire canopy defoliated over just a few days. 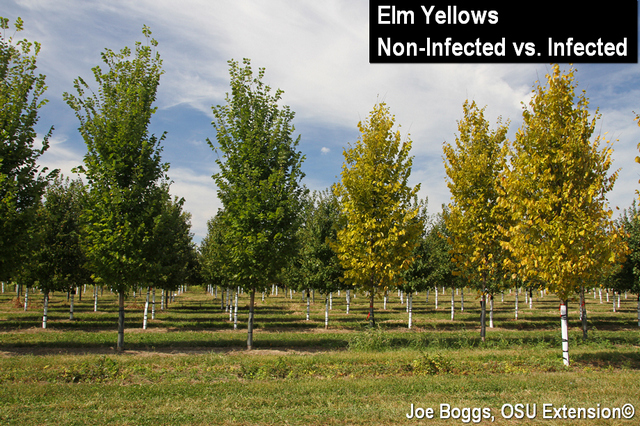 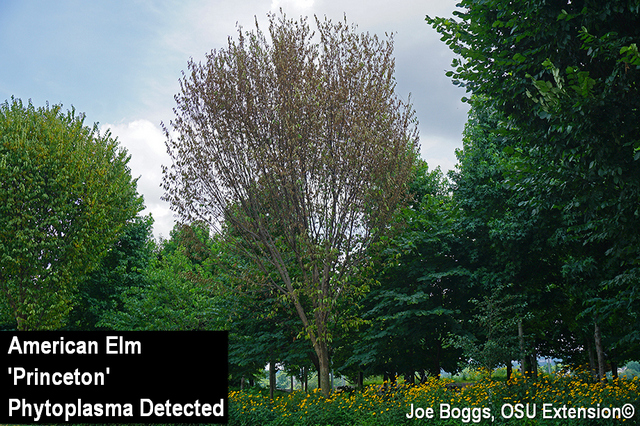 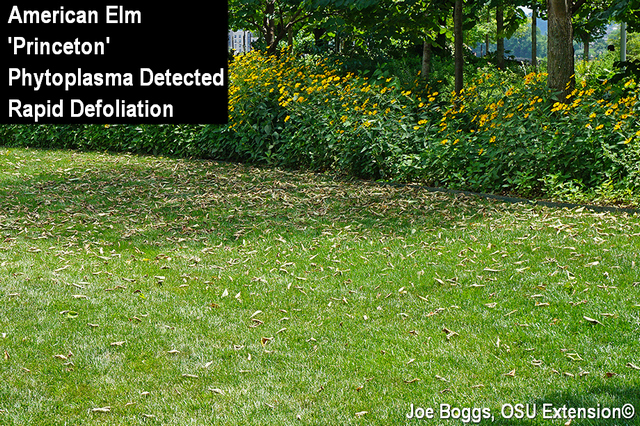 This is why I'm correcting my earlier report.  The PPDC is sending material for DNA sequencing.  Once the PPDC has established the complete story, we will post an Alert at the appropriate time with more complete details.

You can learn more about these plant pathogenic phloem-limited bacteria including the history of their discovery by reading the following paper titled, "Phytoplasmas and Phytoplasma Diseases: A Severe Threat to Agriculture":

Regardless of the outcome of the PPDC investigation, EY remains a concern on American elms in Ohio and elsewhere.  Here are some common indicators that an elm may be infected with the EY phytoplasma:

Rapid Leaf Yellowing and Defoliation:  the name "elm yellows" describes the color of the leaves on infected trees.  The color-change occurs quickly - often within a few weeks - without the leaves first wilting.  The yellowed leaves quickly drop from the trees. 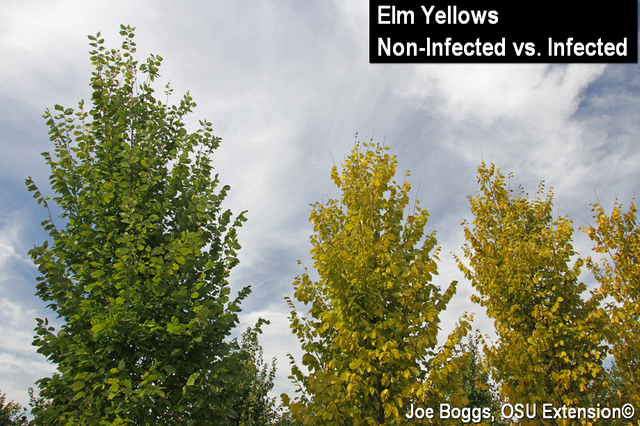 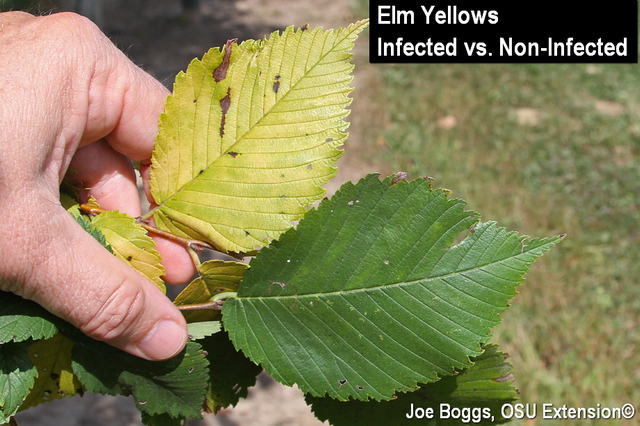 Phloem Discoloration:  the old name for the disease was "elm phloem necrosis" which captures the essence of the infection.  The phytoplasma targets and destroys the phloem with the inner phloem becoming yellowish-brown to caramel colored and the staining extending to the surface of the xylem.  The discoloration is generally confined to the lower portion of the trunk and the lower branches.  This is because the phytoplasma first migrates to the roots causing rapid and substantial dieback of the fine feeder roots, then the main roots.  In essence, there is a "bottom-up" pattern to the infection. 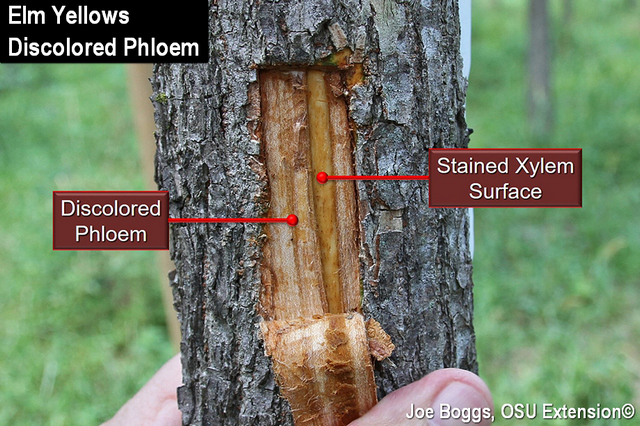 Carefully slicing away the bark on the lower trunk or lower branches using a sharp pocket knife or a draw-knife will expose the off-colored infected phloem tissue.  A cautionary note:  elm phloem tissue will naturally become discolored by oxidation when exposed to the air.  The oxidation occurs in minutes, and mimics the discoloration caused by EY, so samples showing phloem necrosis that is suspected to be caused by EY must be fresh! 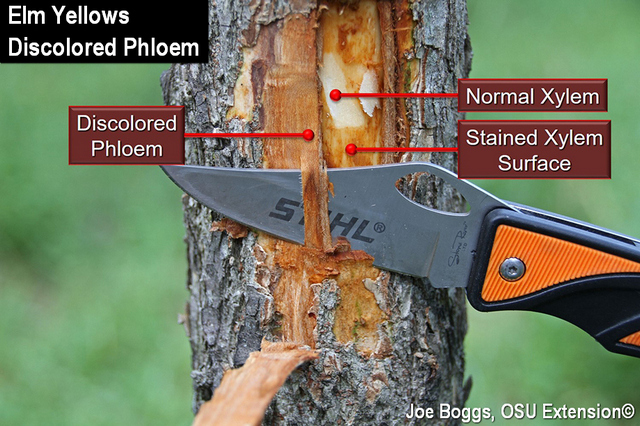 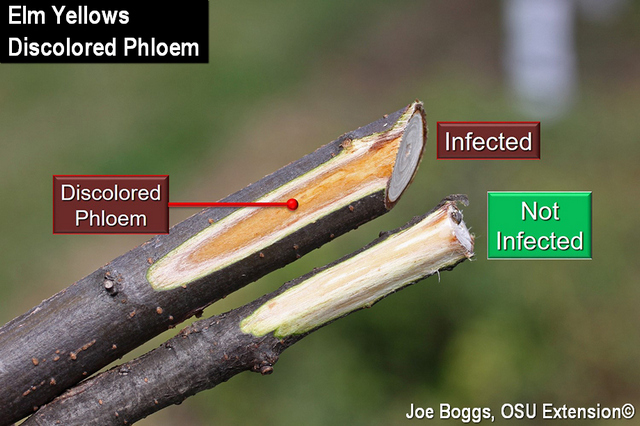 Wintergreen Odor:  Methyl salicylate (oil of wintergreen) is produced in the phloem tissue that is colonized by the EY phytoplasma.  Cut a section of bark to the white wood near the base of the main stem and place the sample in a sealed jar.  While the wintergreen scent is usually very faint at first, it becomes easily detectable after the sample has been held in the jar for about 3 - 4 hrs. 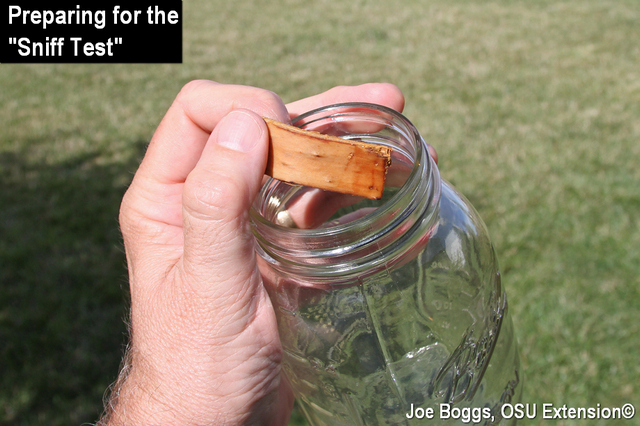 Quick Death of Trees:  Trees that appear perfectly healthy with normal twig elongation and leaf expansion early in the growing season are often dead by the end of the season. 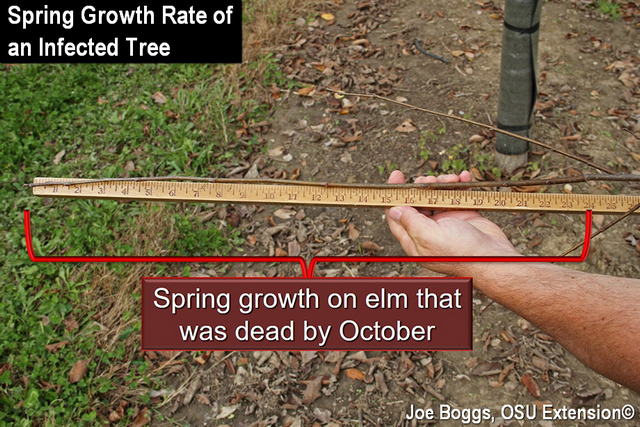 CONFIRMATION:  Although the symptoms listed above provide strong evidence of EY, the only sure-fire way to know that a tree is infected (and infectious!) is to send samples to a diagnostic clinic capable of performing the appropriate tests.  Keep in mind that as illustrated by my mea culpa, it takes time for the confirmation to occur.

Other Elm Problems to Consider 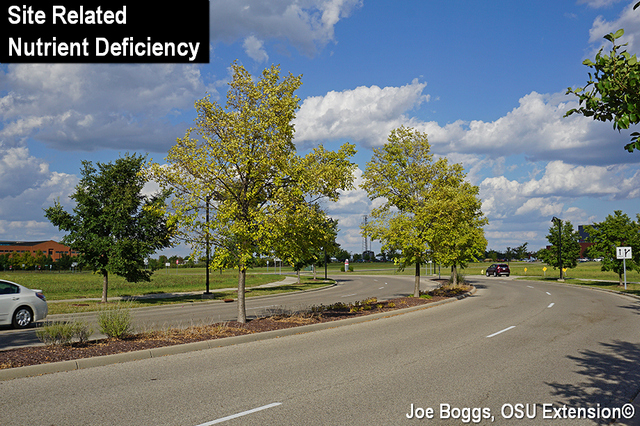 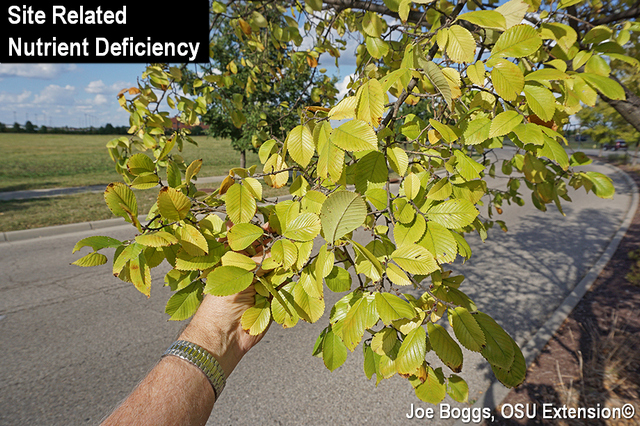 Black Leaf Spot:  this fungal disease of elms produces irregular dark brown to black spots that may be slightly raised.  Heavy infections may cause leaves to yellow and drop.  However, yellowing does not occur prior to the development of the leaf spots. 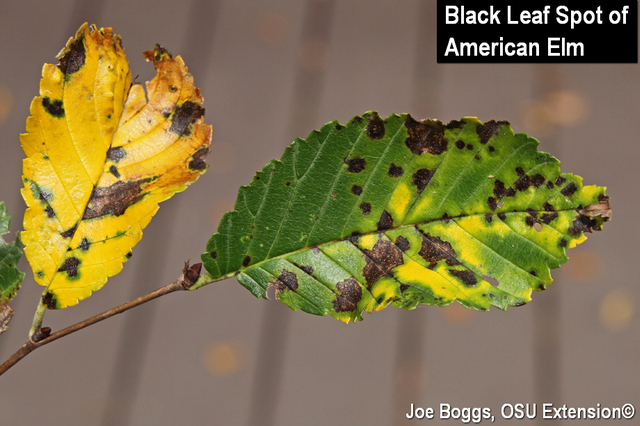 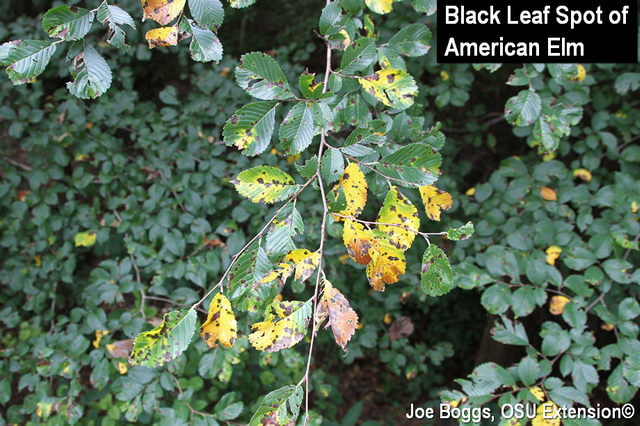 Environmental Calamities:  Everything from poor soil conditions to drought to over and under-watering can cause American elms to collapse.  However, leaf wilting is usually a tell-tale pre-collapse symptom. 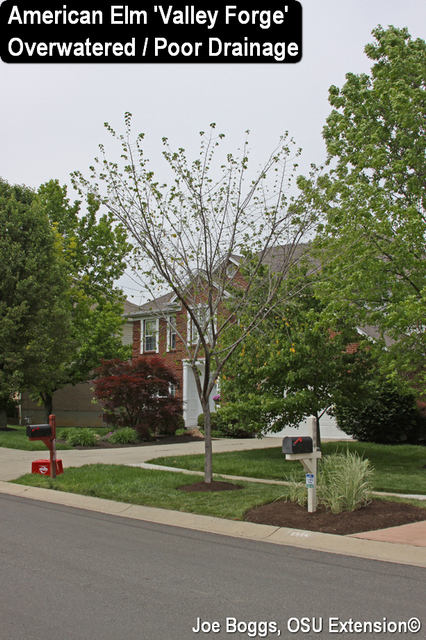 Vascular Wilt Diseases:  These diseases prevent water from reaching the leaves by plugging the vascular system.  Thus, vascular wilts produce noticeable and sometimes rapid leaf wilting and browning, particularly in the heat of summer, as leaves are starved for water.  Vascular wilts usually produce sectional dieback with a few branches succumbing at a time.  However, a complete collapse of the canopy is also possible.

American elms that are considered tolerant of DED have succumbed to DED although this is a rare occurrence.  It is speculated that trees suffering from severe stress are made more susceptible.  Verticillium wilt has long been the nemesis of American elm trees that are under stress.  Resistance to DED does not mean that elms will not suffer from branch dieback from this disease.

Although EY has been affecting elms for at least as long if not longer than DED, the disease has continued to appear as sporadic, highly localized outbreaks.  Often, only a few trees die even though other elms are within visual range of their demise.  Still, with the widespread reintroduction of American elms into urban landscapes, this old killer has re-emerged to present a serious threat.  If you suspect a tree is infected, act quickly by getting a confirmation.