Be Alert to Boxwood Blight 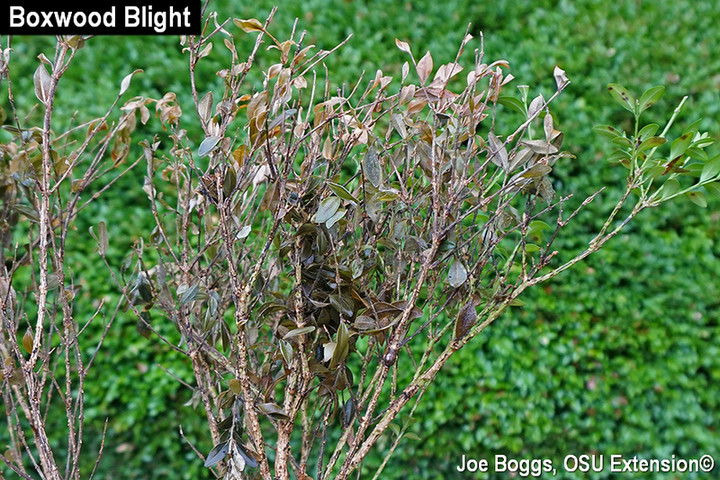 Boxwood Blight was recently confirmed in a private landscape in Greater Cincinnati by The Ohio State University's C. Wayne Ellett Plant and Pest Diagnostic Clinic (PPDC).  The disease causes a severe and usually rapid decline of susceptible boxwoods.  Heavy defoliation and branch dieback can occur in a single season killing small plants.  The ornamental value of larger infected boxwoods is reduced and plants may become so stressed they succumb to secondary problems. 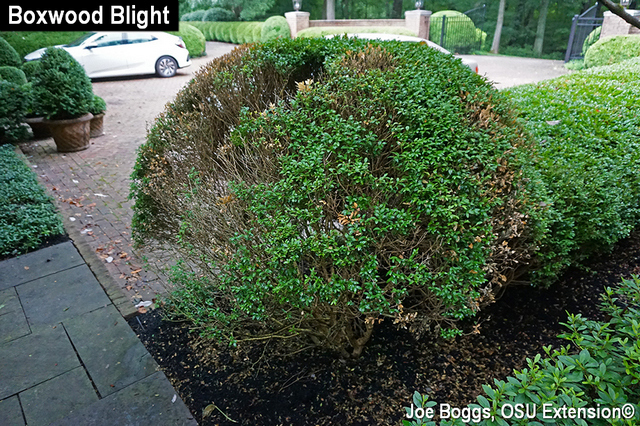 The disease is caused by the fungal plant pathogen Calonectria pseudonaviculata which was previously named Cylindrocladium pseudonaviculatum or Cylindrocladium buxicola.  The literature reports the pathogen and disease were first identified in the United Kingdom in 1994.  The current distribution includes 12 other European countries as well as western Asia and New Zealand.

The fungus may infect several members of the box family (Buxaceae) including Japanese spurge (Pachysandra terminalis); Allegheny spurge (P. procumbens); sweetbox (Sarcococca spp.); and of course, boxwood (Buxus spp.).  However, all boxwoods aren't equal.  Some are highly susceptible while others are tolerant.

The pathogen and disease were found in Connecticut in 2011 and is now confirmed in 28 states as well as British Columbia, Ontario, and Quebec, Canada.  This is not the first time this fungal disease has been found in landscapes in Ohio.  This means that Green Industry professionals throughout Ohio must remain informed and ready to take action including confirming boxwood blight by sending samples to the PPDC.  Professionals should never rely on a "field diagnosis" to inform their actions.

Ron Rothhaas (Arbor Doctor, LLC, Cincinnati, OH) is an ISA Board Certified Master Arborist and a highly capable field diagnostician. However, rather than speculating on what might be happening in a landscape he was visiting, he confirmed what's actually happening by sending samples to the PPDC. Ron and I will be holding a boxwood blight mini-workshop at our next Greater Cincinnati BYGLive! Diagnostic Walk-About.

It's essential to separate boxwood blight from the less damaging but more common Volutella Blight produced by the fungal pathogen, Pseudonectria buxi (formerly Volutella buxi).  Plants can recover from Volutella blight; however, highly susceptible boxwoods don't recover from boxwood blight.  Adding to the challenge, some of the samples Ron sent to the PPDC tested positive for Volutella meaning both boxwood diseases are occurring at the same time in the same planting.

Volutella blight is also called Pseudonectria Canker owing to the occurrence of stem cankering infections which do not occur with boxwood blight.  The leaves on cankered stems turn yellow to yellowish-brown and remain attached to the stems for an extended period of time.  Symptoms often appear in early spring and are commonly mistaken for winter injury.  Cankered stems can be removed through pruning which promotes plant recovery. 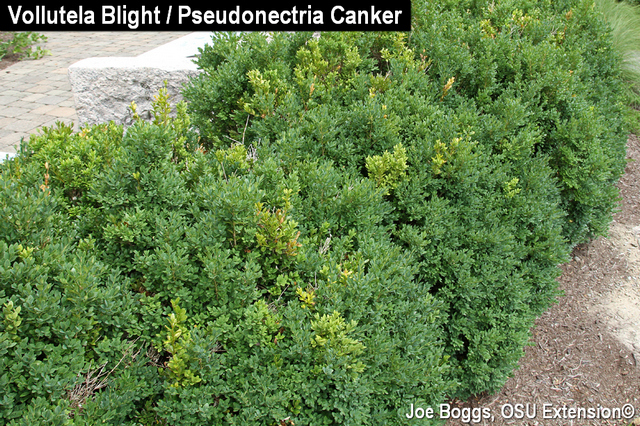 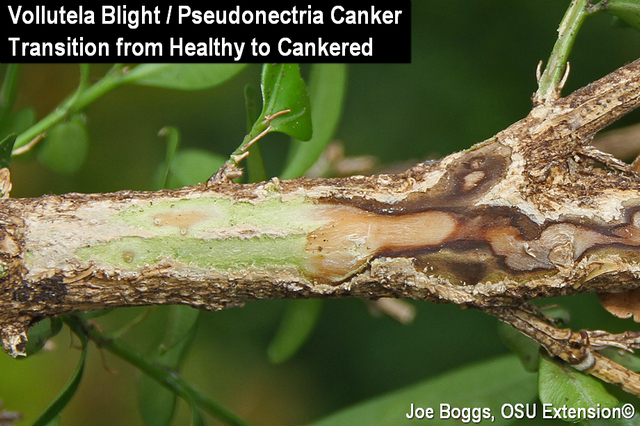 A signature symptom of boxwood blight is rapid defoliation.  Leaf infections may sometimes occur to produce leaf spots; however, this is not a consistent symptom.  Sometimes, leaves simply wilt, turn dark bluish-green and drop. 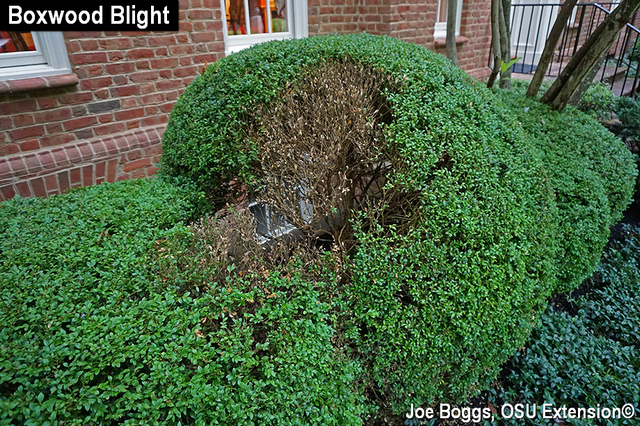 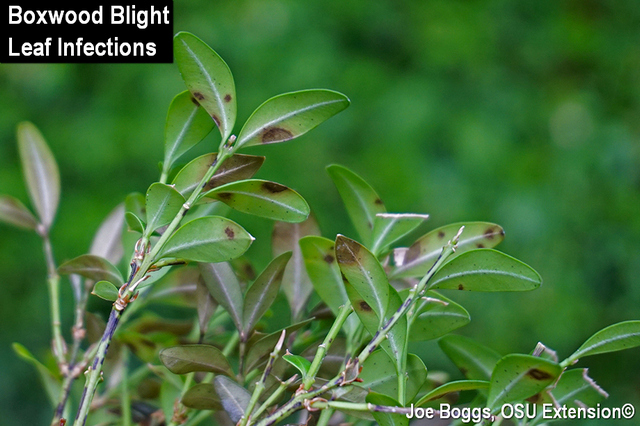 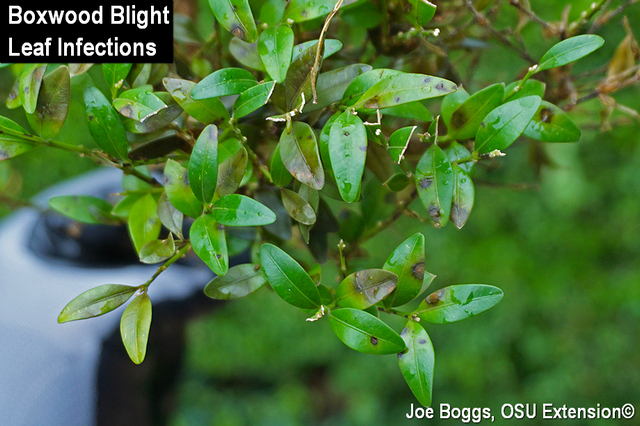 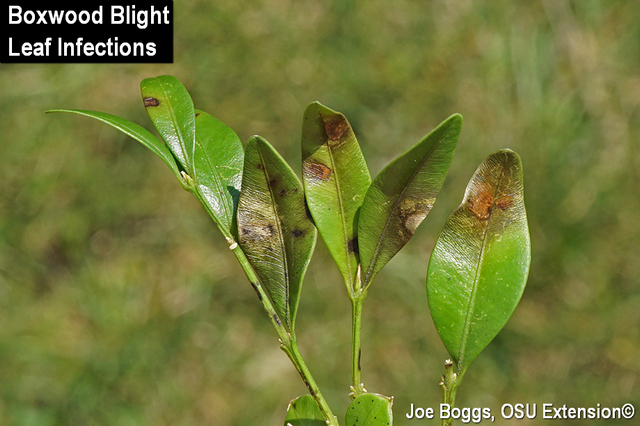 Another symptom common to boxwood blight is black streaking on the stems.  The streaks are most evident when they occur on green stem tissue.

It must be stressed that neither rapid defoliation nor blackened stems necessarily mean boxwoods are suffering from boxwood blight.  However, the symptoms are strong indicators that samples should be sent to a diagnostic lab such as the PPDC in Ohio. 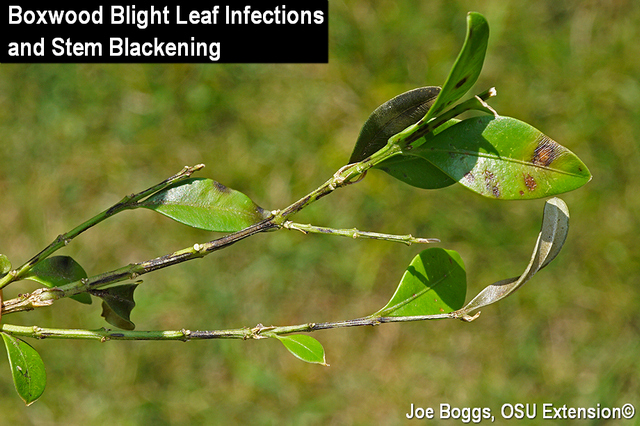 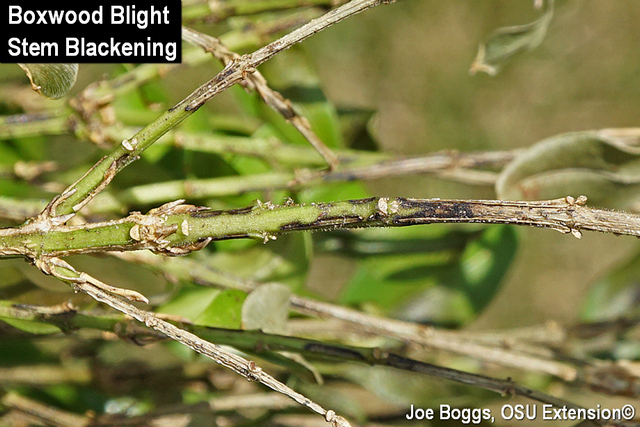 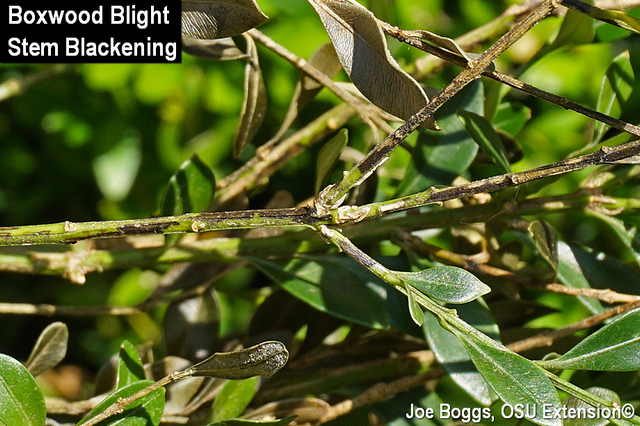 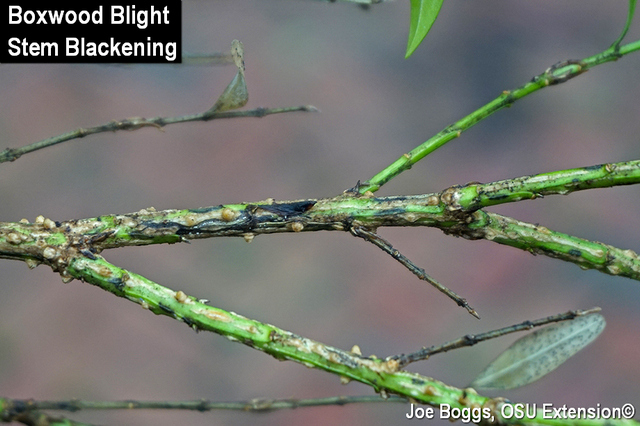 A great deal of work has been done by universities in states where boxwood blight has been detected.  The following are a sample of some excellent university fact sheets on boxwood blight as well as Volutella blight.  They also provide in-depth management Plans:

How the Fungal Pathogen is Moved from Place-to-Place

The literature notes that the boxwood blight fungus produces heavy, sticky spores that are not carried far by the wind.  They are better suited to sticking to the feet of birds, the fur of animals, and to pruners, shears, etc.  Thus, the fungus may arrive through animal incursions, both human or otherwise.

This further emphasizes the need to confirm the occurrence of boxwood blight, react quickly to contain the disease, and avoid inadvertently spreading the fungus from one landscape to the next on contaminated tools, clothing, etc.  In fact, both the Virginia Tech and the University of Kentucky fact sheets provide a list of measures to prevent the site-to-site spread of the boxwood blight fungal pathogen. 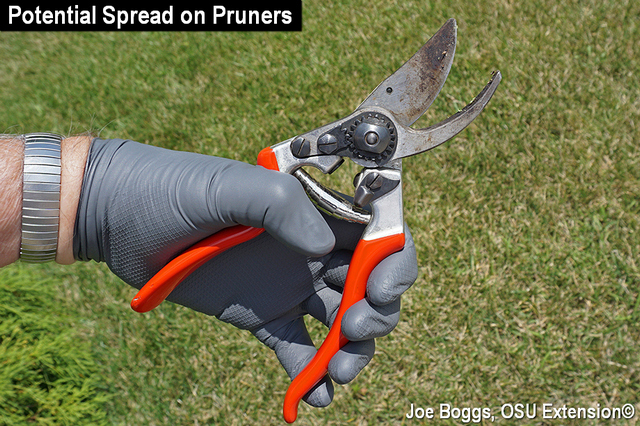 For example, it is strongly recommended that tools used for pruning or shearing boxwoods be sanitized before moving from one group of boxwoods to another within a landscape and certainly before working on boxwoods at another site.  The Virginia Tech factsheet recommends using o-Benzyl-p-chlorophenol (e.g. Lysol Concentrate Disinfectant) mixed at a rate of 1.25 oz. / gallon.  Sodium hypochlorite (household bleach) is also recommended mixed at 1 part bleach to 9 parts water.  However, this sanitizer must be mixed fresh at frequent intervals and should be rinsed from tools to reduce damage. 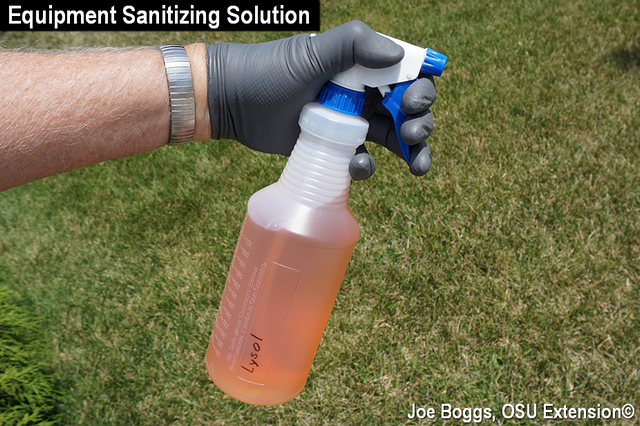 Planting infected boxwoods is another common way for the pathogen to be spread to new landscapes.  Horticultural regulatory agencies such as the Ohio Department of Agriculture are keenly aware of boxwood blight and nursery inspectors are well-trained in detecting tell-tale symptoms.  However, the movement of plants outside of the protective regulatory shield, such as digging and moving plants from one landscape to another, presents another route for spreading the pathogen.

Don't Give Up on Boxwoods

The landscape where Ron found boxwood blight includes hundreds of boxwoods; they are integral to the overall landscape design.  Indeed, boxwoods often occupy a unique profile in landscape designs based on their hard-to-match appearance.

Research has also shown that boxwood blight can be prevented through season-long fungicidal applications made at around 14-day intervals.  However, no fungicides have been found that offer a curative option; the disease cannot be halted in plants that are infected.  This means that while fungicides may be used as part of a boxwood blight management plan, they should not be the only tool in the management toolbox.

Much has changed since boxwood blight was first discovered in the U.S. in 2011.  At the time, it was widely believed the disease spelled the end of boxwoods in our landscapes.  However, research studies conducted since that time by universities and others are proving this to be a premature prognosis.

Both the VT and UK fact sheets, as well as other university-based resources, provide workable boxwood blight management plans for nurseries and for landscapes where the total removal of boxwoods is not a viable option.  They involve confirming boxwood blight through sending samples to plant and pest diagnostic labs, removing and destroying infected boxwoods, replanting using less susceptible types, and making fungicidal applications to protect non-infected plants. 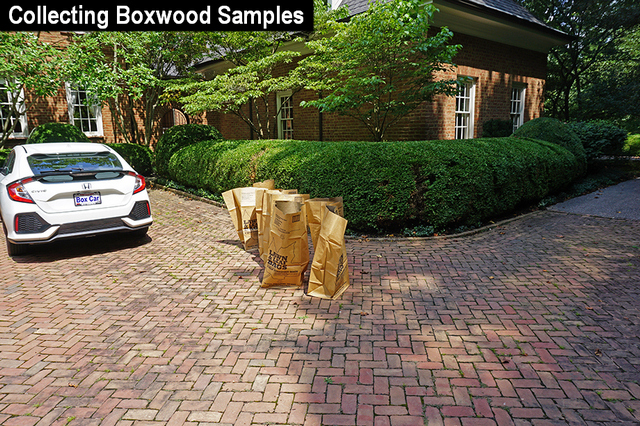 Funding Research to Keep Boxwoods in Our Future

It is important to note that research continues on boxwood blight susceptibility as well as fungicide efficacy.  The bottom line is that we should not give up on boxwoods.

You can find out more about past and future boxwood blight research initiatives funded by the AmericanHort Foundation, Horticulture Research Institute by clicking on this hotlink:

You can support this research aimed at thwarting boxwood blight by making a charitable contribution in support of the Boxwood Fund.  Please contact the AmericanHort Foundation, Horticulture Research Institute (HRI) at 614-487-1117.  Make checks payable to HRI at 2130 Stella Ct; Columbus, OH 43215 and include a memo line: Boxwood Blight.