Walnut Cats on the Prowl

First-generation Walnut Caterpillars (Datana ministra) are producing noticeable defoliation in southwest Ohio.  The moth caterpillars feed in groups, or "colonies," of 10-30 individuals throughout their development which is why their defoliation is often focused on a single branch or a group of adjoining branches. 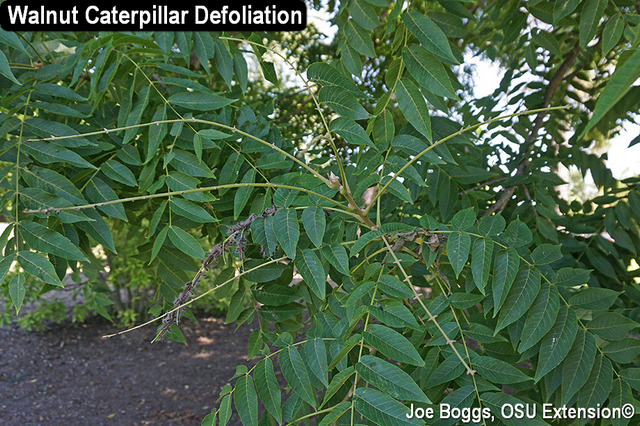 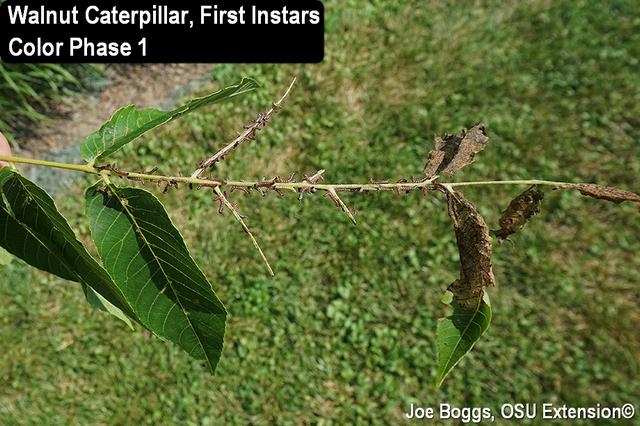 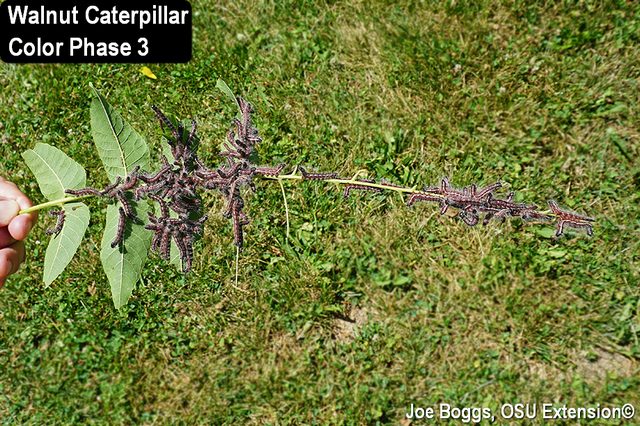 As their common name implies, walnut caterpillars are most often found on walnut trees, but they will also feed on hickory and pecan trees and will occasionally infest apple, birch, honeylocust, oak, and willow.  Large established trees can typically handle the defoliation with little long-term impact on overall tree health; even when infested by multiple colonies.  However, multiple colonies on small trees can cause significant harm. 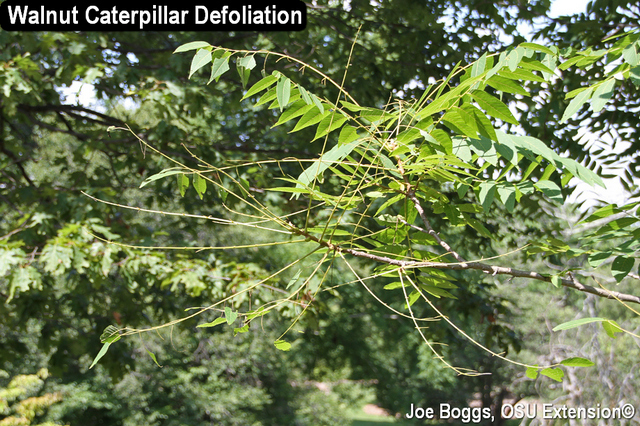 Walnut caterpillars practice an interesting defense behavior.  When disturbed, the caterpillars will rear their front and tail ends, often in unison, presumably to confuse predators.  Thus, these caterpillars have great entertainment value! 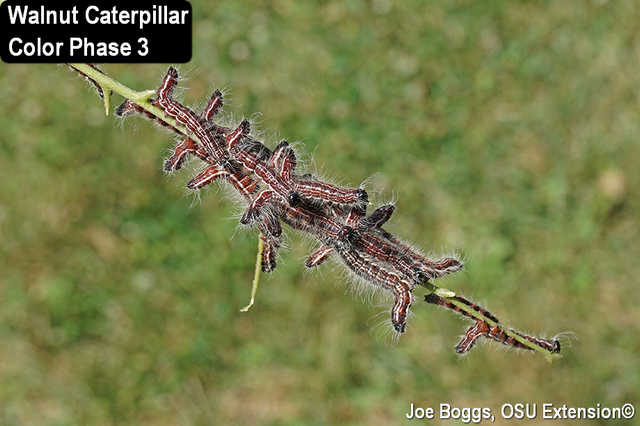 They also practice an unusual molting behavior.  When molting, they group together on trunks, branches, or twigs and all of the caterpillars molt at the same time leaving behind a mass of hairy exoskeletons that looks like a patch of fur.  Finding these furry patches on or near denuded walnut leaves is a good way to identify the culprit behind the defoliation. 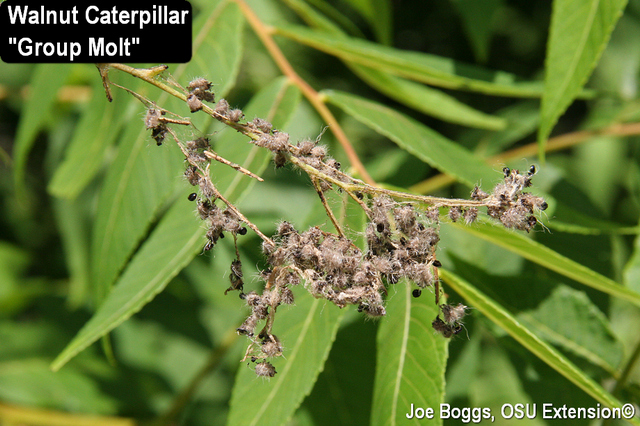 It's Just a Phase

The caterpillars pass through distinct "color phases" during their development meaning they change their colors and markings as they mature.  There is some debate about whether or not it's 3 or 4 color phases.  Regardless, the changes in colors, markings, and furriness may present a challenge with their identification. 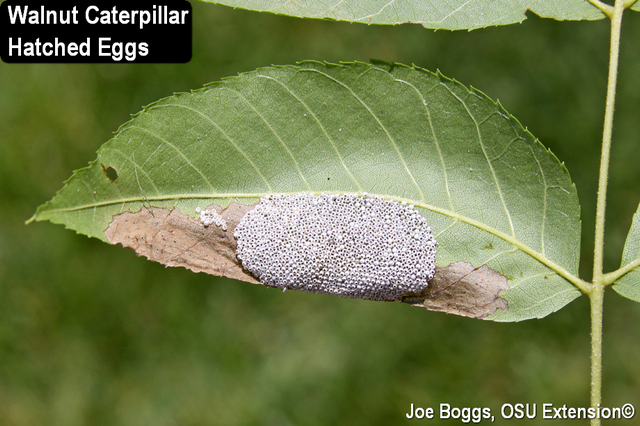 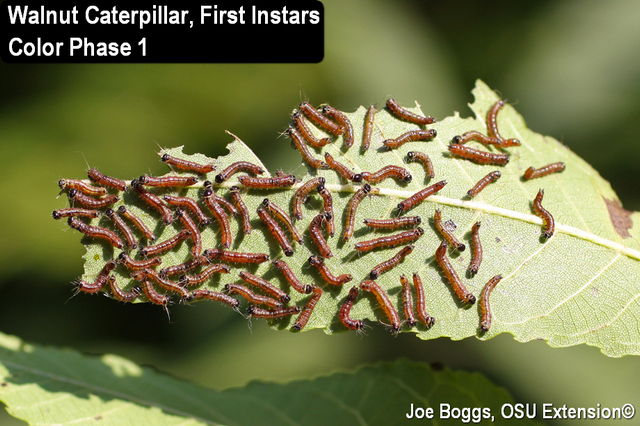 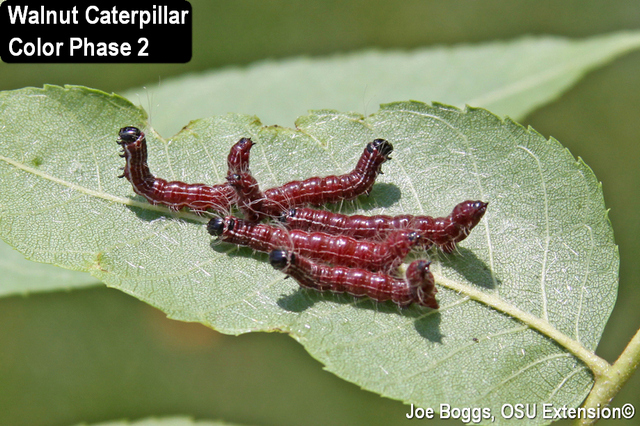 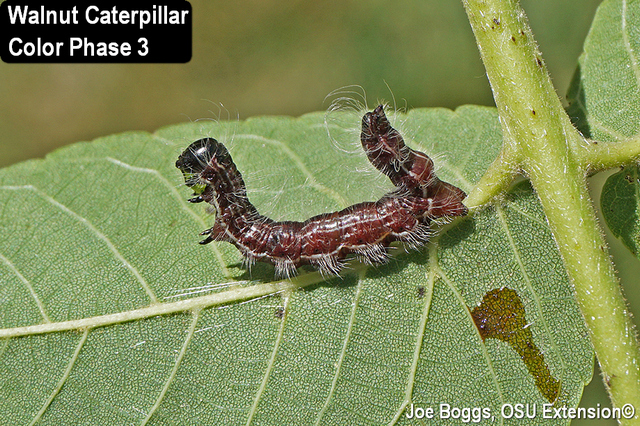 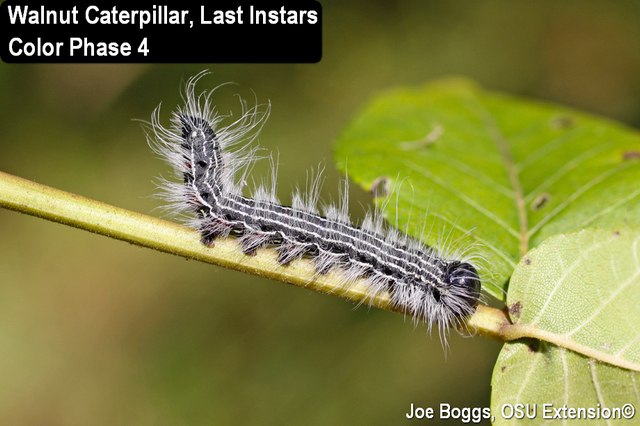 There are at least two generations per year in southern Ohio with some indications there may be only one generation in the northern part of the state.  It appears we are nearing the end of the first generation in Greater Cincinnati.

Walnut caterpillars have a wide array of natural enemies from birds to insect predators to insect parasitoids and insect pathogens.  These natural controls can keep populations in check; however, there may be occasionally caterpillar outbreaks as is common for native insects.

Unfortunately, Btk is most effective on small caterpillars and becomes much less effective when caterpillars reach the middle instar stages. Btk is a stomach poison which means it must be consumed to kill the caterpillars and it has relatively short residual activity.  Thus, two applications may be required. 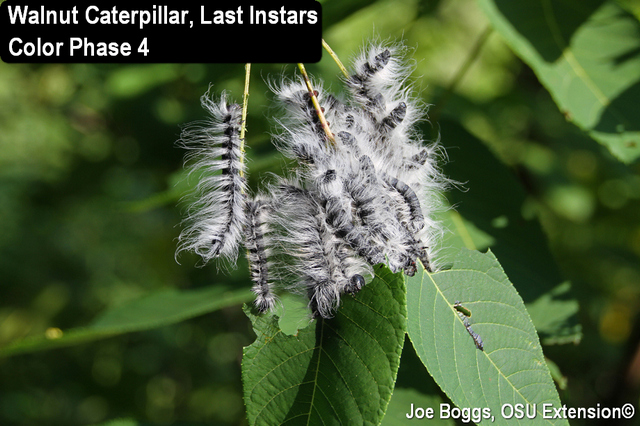