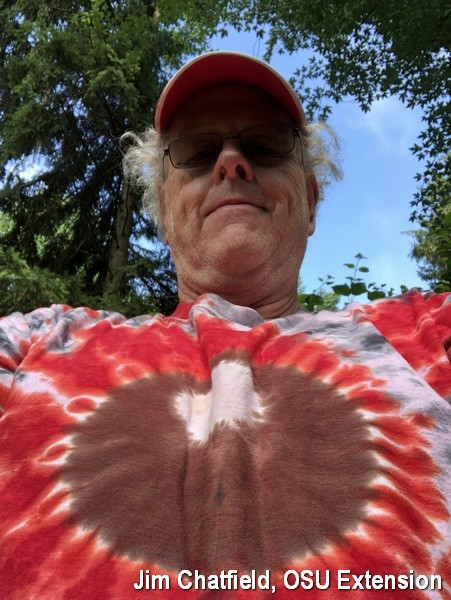 Buckeyes and horsechestnuts (the genus Aesculus), alone and together. This is one of a series of Aesculations; meditations on the genus Aesculus. Let us begin with the pathological: Guignardia leaf blotch disease. As in all, genetics is in the details. A base pair here, a base pair there…and pretty soon –  something (not ) entirely, different.

The symptoms of this disease are beginning to show their brick-red to brown lesions on horsechestnut and buckeye foliage now. Infections were earlier, during our seemingly endless Ohio monsoons of 2019, and these latent infections are now fulfilling their symptomatic pathological destinies.

Initial infections are in spring from spores produced in infected leaves and twigs from the past year. Moist conditions during leaf emergence, such as occurred this year enhance the infections and subsequent cycles of infection occur if moist conditions continue. Black fruiting bodies of the fungus are often evident in lesions by late summer. The disease does not appear to be a serious health problem, as much of the annual growth of Aesculus has occurred by the time foliage is badly damaged.

Recently, during a walk at one of the OSU Extension Secrest Arboretum walks, the contrast between two Aesculus taxa was tell-tale for the importance of DNA. First was one of the Aesculus xcarnea hybrids between common horsechestnut (Aesculus hippocanstanum) and red buckeye (Aesculus pavia), namely the soft pink-flowered clone known as ‘Ft. McNair’, selected in Washington. As Michael Dirr and Keith Warren note in “The Tree Book: “these and other A.xcarnea cultivars are “superb park, large area, campus, and golf course tree(s)…that any arboretum should include.  Sun and moist, well-drained soils, low or high pH.”

The second tree for comparison was a cultivar from Minnesota known as ‘Autumn Splendor’. This clone is thought to be a tri-brid of yellow buckeye (Aesculus flava) and red buckeye , with some Ohio buckeye (Aesculus glabra) in the mix . The leaves are smaller than ‘Ft. McNair, the flowers are more yellow-green but spectacular as are all Aesculus taxa, and pertinent to the genetics herein:  the susceptibility to Guignardia leaf blotch disease is much less than for ‘Ft. McNair’.