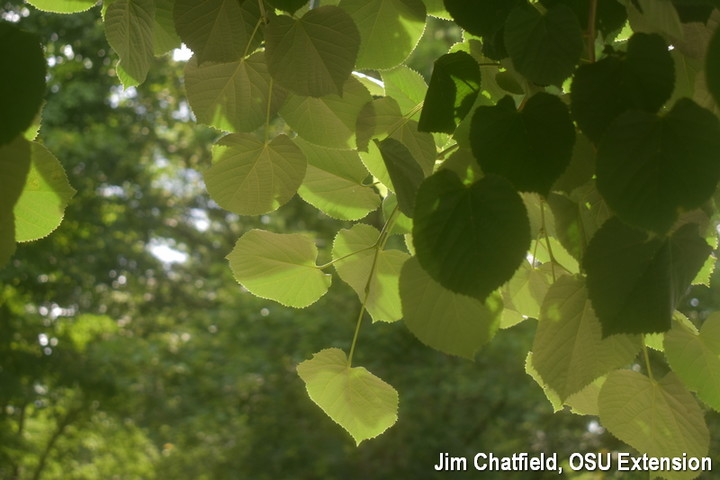 …Arden Road, that is. I had a free hour this past Friday following the wonderful Ohio Department of Natural Resources  40th anniversary fest at the Ohio Exposition Center at their most excellent ODNR Natural Resource forest.  So, I decided to look at urban trees, along several blocks of Arden Road just west of Indianola Avenue in Columbus.  Here are a few things of note:

Lindens. There were three species. Silver linden (Tilia tomentosum), one of my favorites, is known for its two-tone leaves, silvery undersides and dark green upper surfaces, shimmering in the wind.  A bonus for silver lindens in locations and years in which Japanese beetles are prominent, is that they are much less susceptible to feeding than say, little-leaf linden (Tilia cordata). There were some little-leaf lindens on the street (pictures not very good), but the other standout were what I take to be cultivars of American linden/basswood, TIlia americana). Large leaves and green on both surfaces. The strap-like light-green colored modified leaves known as bracts that hold the sweet-smelling flowers and fruits were much in evidence on all three linden species.

Oaks.  Towering pin oaks in the yards. Swamp white oaks as sweet trees, lovely, and here Joe Boggs shall be happy, some classic symptoms of oak shothole leafminer (Japanagromyza viridis) damage. The adults of this fly damage oak leaf buds, resulting in matching holes on both sides of the expanding leaves. Larvae cause leaf-mining damage, feeding between layers of the leaf blade.

Crabapples. Alas, there were only a few crabapples on the Arden Road segment I traversed. There was a pretty good dose of apple scab present, but that can be avoided with resistant varieties).  For trials in Ohio, check out:

under the heading Crabapple Trials. The latest the Erik Draper and I have summarized these on the web is the 2014-2015 seasons, so we need to get to work posting newer evaluation results.

On another note, this one more timely,  Michael Dirr and Keith Warren in their wonderful new “The Tree Book’ devote 25 pages of descriptions and vivid color pictures of these ornamental Malus  taxa. And they know trees. In fact the first line of their book is: ”We love trees”. So, twenty-five pages of the 940 total pages.

Kentucky coffeetrees (Gymnocladus dioicus). Speaking of the new Dirr/Warren book, one thing I love is the update from the last edition (6th, 1/1/2009) of Dirr’s “Manual of Woody Landscape Plants”.  The information in all of the editions of the Manual is great, but of course cultivar information changes rapidly these days in the tree world. So, great to see such information on the newer Kentucky coffeetree selections such as ‘Morton Arboretum’s upright Skinny Latte™ ('Morton') and J. Frank Schmidt Nursery’s (Gymnocladus dioicus 'Espresso-JFS').

On Arden Road there were no such cultivars, but there were this magnificant towering stark-textures trees rising into the sky and replete with large seedpods.  Seedpods you will not see on the male Kentuckycoffeetree cultivars. You will see the genus calling card: “naked branches; reflecting the wonderfully stark branch structure of the species in the winter landscape.

As Michael Dirr has written: “I have known and loved this species since my grade school days in Cincinnati. My aunt owned a farm across the road from our home. In the front garden of her stately brick home was a huge female coffeetree. The huge black pods and stone-hardened seeds were part of my early horticultural education. I see her home and the tree as clearly now as when I collected the fruits and extracted the seeds some 60 years

Maples. The yards had Japanese maples and paperbark maples, and there were numerous red maple street trees. As is often the case, at least some of the red maples had interveinal chlorosis, a fancy way of saying yellowing between the veins. This is classically diagnosed as manganese deficiency on red maple growing in high pH soils, but be careful. Realize however that this may not be a nutrient deficiency in a classic sense: the interveinal yellowing may be due to other factors that limit movement in the phloem and xylem. Root decline due to poorly drained soils, root stress due to drought, damage to the stems resulting in vascular problems, and on and on.  If the problem is deemed significant enough to nail down, soil test and tissue test. Keep on sleuthivation/before you try remediation.

One other maple I admired on Arden was a black maple, evident from its droopy leaves. Some classify this tree as Acer nigrum; others as Acer saccharum subsp. nigrum (Dirr and Warren do so).  So, genetically similar to typical sugar maples (Acer saccharum).  David Wiesenberg taps black maples at Sercrest Arboretum for his maple syrup magic.

Redbud.  There was a gnarly old redbud along Arden, fighting the stereotype of redbuds being understory trees, as they typically are in the forest, but this one was surviving for many decades in relatively open exposure, not perhaps as healthy as one might wish, but adamant in its defiance of conventions, and lovely in its way.

Sweetgum. Sweetgums, cursed by many for their prickly fruits underfoot, is nevertheless lovely to my mind, especially as I contemplate the flowers that led to those mace-like fruits. Our native sweetgum, Liquidambar styraciflua, is widespread throughout the eastern United States from New York to central Florida and west to Illinois and south into Texas and Mexico and cloud forests in central America.

Note: I the past I have reported that the genus Liquidambar (named by Linnaeus in 1753) is in the Hamamelidaceae, the witch-hazel family.  True, it was so-classified, but now the taxonomic consensus puts it as the monogeneric representative of the Altiginaceae.

Elms. As seen in many other streetscapes, lacebark elm is very attractive, with bark on young trees having a touch of cinnamon color, ultimately giving way to magnificent orange lenticel features on older trees. Also present were inconsequential insects to warm Joe Boggs’ heart: elm pouch galls (Fenusa ulmii) and some aphids causing foliar yellowing and rolling of leaf edges.  There were even a few “baby alligators” that I could not quite get in focus as they crawled from the leaves to my hand.

Note: Perhaps they were ladybeetle larvae feeding on the aphids.

And more and more: a few remnant ashes, tomatoes and squashes in front yards. Signs heralding wildlife habitats. And one of my favorites – the Free Little Library “take a book/leave a book” wee little building.

So, there is a lot to see wherever you go. Just do it.