Be Alert to Fletcher Scale on Baldcypress 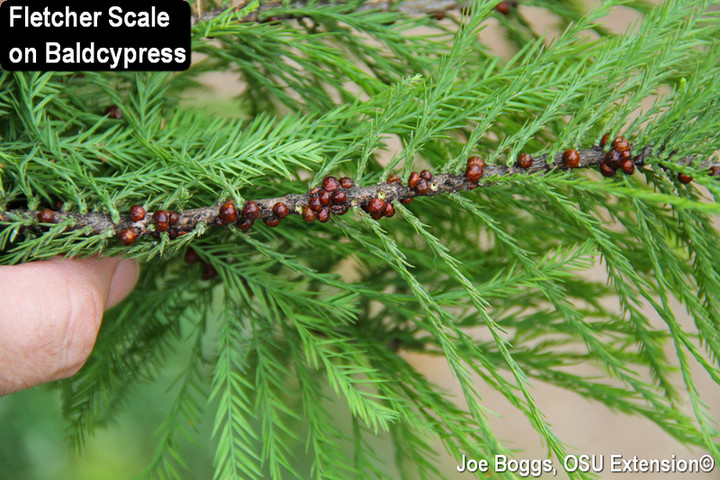 Fletcher scale (Parthenolecanium fletcheri) is most commonly associated with yews and arborvitae; it's sometimes called "arborvitae soft scale."  However, this native scale may also infest junipers, hemlock, cypress, and baldcypress.  In fact, I most often find infestations on baldcypress in southern Ohio. 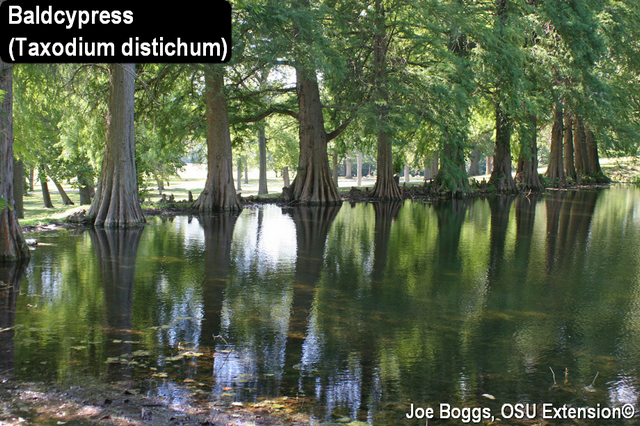 Populations of fletcher scale can build rapidly in urban landscapes for several reasons.  First, the females are parthenogenetic meaning they produce viable eggs without being fertilized by males.  This saves time by dispensing with the need to go on dates, get a mortgage to buy a tree, etc.  Once the females mature, they produce 500 – 600 eggs.

Another reason this scale can flourish in urban environments has to do with the overall health of their perspective host trees.  Research has shown a strong connection between tree stress and loss of defenses against this and other Parthenolecanium scales.  Conversely, healthy trees can mount a defense to the point where they can even reduce established populations; a phenomenon termed “pheno-immunity.”  Unfortunately, this "self-cleaning" condition is not the same as genetic resistance and is reversible.

Finally, Fletcher scale has many natural enemies that can keep populations in check.  However, contact insecticides that wipeout predators and parasitoids have been implicated in outbreaks in nurseries.  Thus, choose wisely if insecticide suppression is deemed necessary.

Adult females are hemispherical-shaped to slightly elongate and range in color from yellowish brown to tan to dark reddish-brown.  They are usually found clustered towards the ends of the stems of their host plants where they may be mistaken for buds by the casual observer.  Their coloration and location can make them difficult to detect.  Fletcher scale looks very similar to a number of other so-called lecanium soft scales including European fruit lecanium (P. corni); however, this scale is largely confined to deciduous trees whereas Fletcher scale infests conifers. 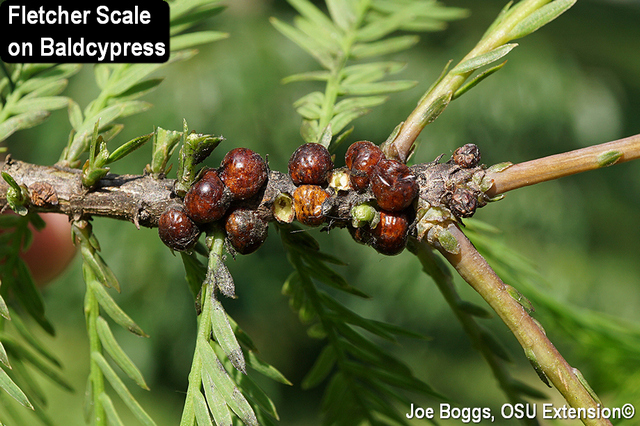 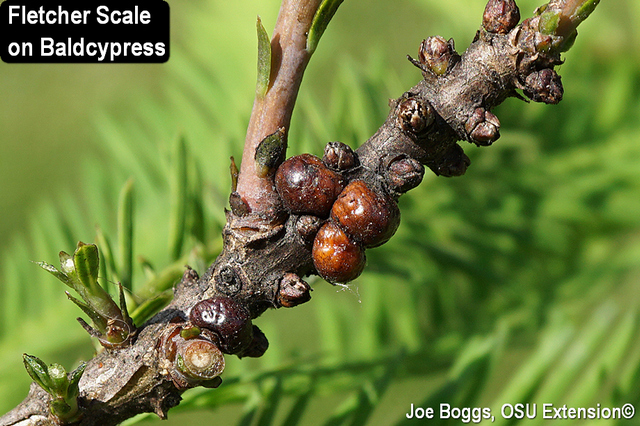 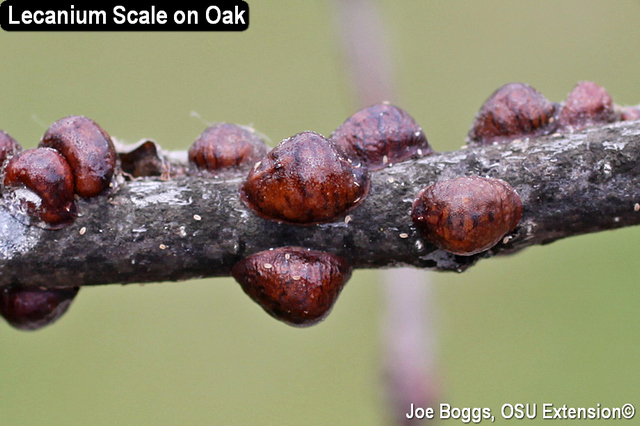 Fletcher scale has one generation per year and overwinters as second instar nymphs on stems.  The nymphs begin feeding in the spring and rapidly mature into parthenogenetic females.  Heavy honeydew production occurs during this time with the sticky liquid quickly becoming colonized by black sooty mold to give the inner stems and foliage of heavily infested trees an unsightly blackened appearance. 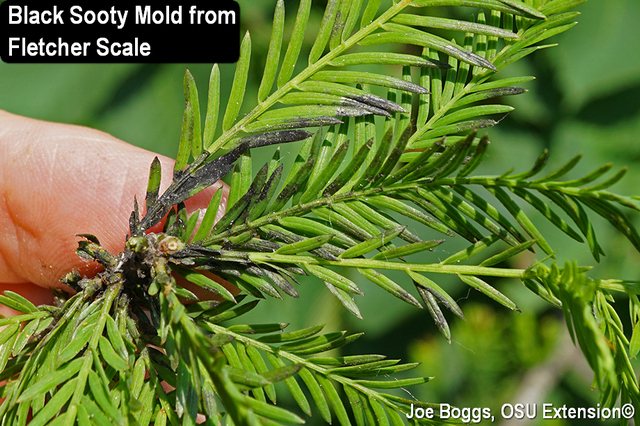 Eggs hatch when the accumulated Growing Degree Days (GDD) reaches 730 and first instar nymphs (crawlers) immediately migrate towards the ends of branches to seek feeding sites where they insert their piercing-sucking mouthparts into phloem vessels.  The yearly movement of crawlers towards the ends of branches explains why higher concentrations of this scale tends to occur on the most recent growth.

As with other soft scales, the collective feeding activity of high populations of adults as well as crawlers can cause branch dieback.  The stress associated with sap loss can also make heavily infested trees more susceptible to opportunistic pests.

Fletcher scale is susceptible to horticultural oil applications made using the dormant rate against overwintering nymphs.  This approach will help to preserve natural enemies.  Although topical applications of pyrethroid insecticides targeting settled crawlers in mid-summer have also proven to be effective, these contact insecticides may also suppress beneficial insects important for providing natural control.

Soil-applied systemic insecticides (e.g. dinotefuran, imidacloprid), with the applications made in early spring, have also been shown to suppress settled crawlers and will have limited impact on beneficials.  Of course, applicators must read and follow label directions for all insecticide applications including horticultural oils.  Particular attention should always be given to warnings regarding potential damage to targeted plants.

Of course, the best offense is a good defense.  Although pheno-immunity appears to be a reversible condition, it demonstrates the inherent power of healthy plants to mount an effective defense against various plant pests.  Thus, actions taken to maintain plant health such as providing water during droughts can have an indirect impact on reducing the direct impacts of Fletcher scale. 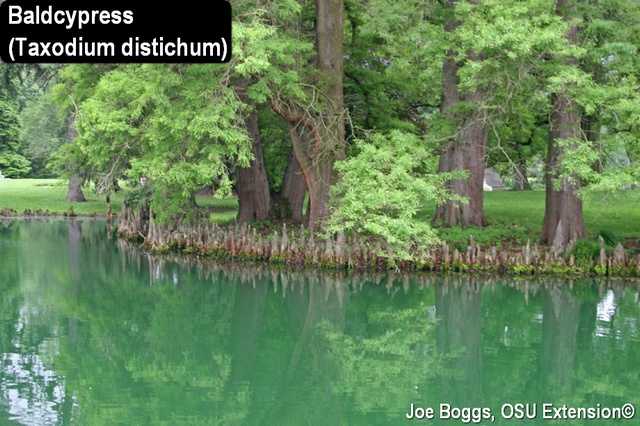