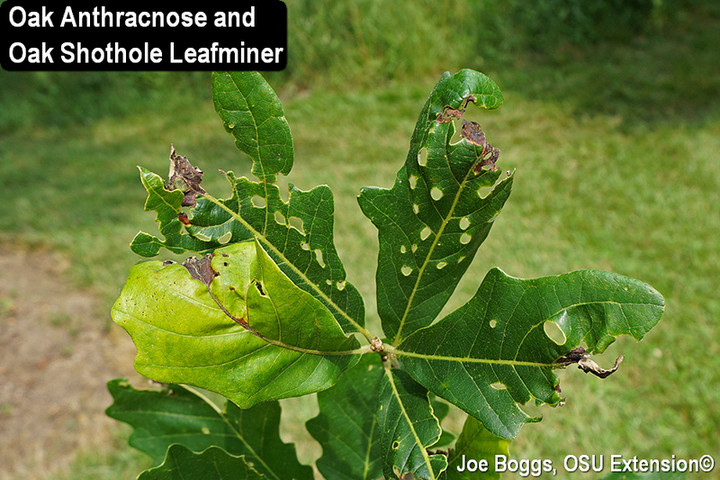 Holes and blotch-type leafmines produced by the oak shothole leafminer (Japanagromyza viridula, syn. Agromyza viridula) coupled with necrotic tissue caused by oak anthracnose are combining to make some oaks in southwest Ohio look pretty scuzzy.  The bad news is nothing can be done now to reverse the damage.  The good news is that neither of these occasional springtime afflictions has a history of causing significant harm to the overall health of their oak hosts. 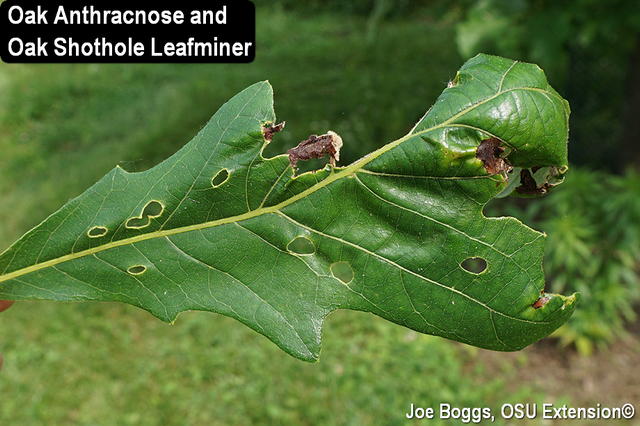 Oak anthracnose is produced by the fungus Apiognomonia quercina.  A common symptom of the disease is brown, necrotic tissue that appears to expand from leaf veins.  The necrotic tissue may be bounded by a zone of chlorosis which is possibly associated with a defense reaction to fungal infection. 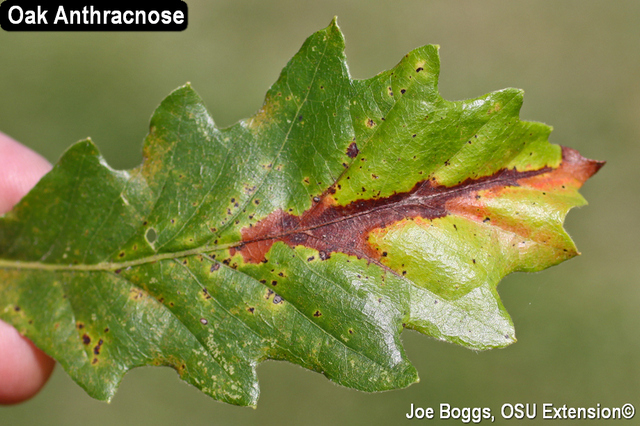 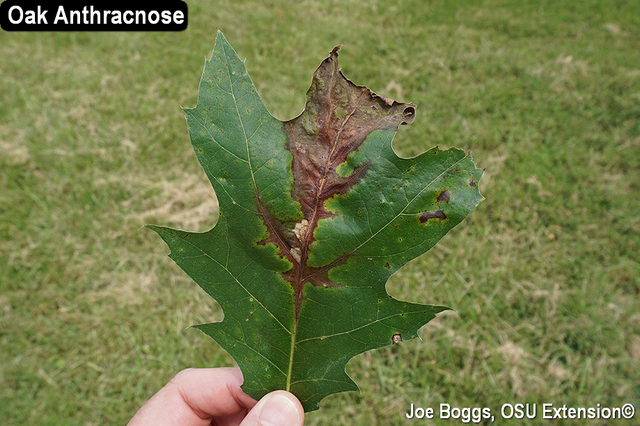 Localized infections occur on newly expanding leaves with the infections restricting normal leaf expansion.  This can cause the leaf area around the infected tissue to become curled or distorted. 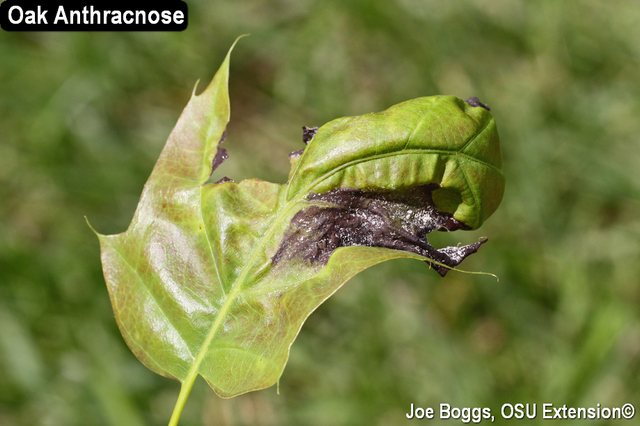 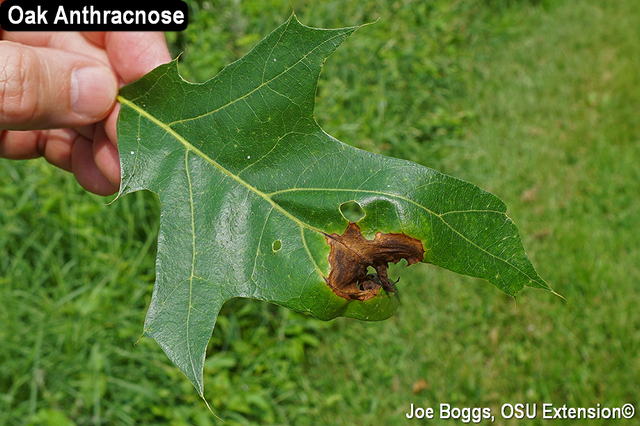 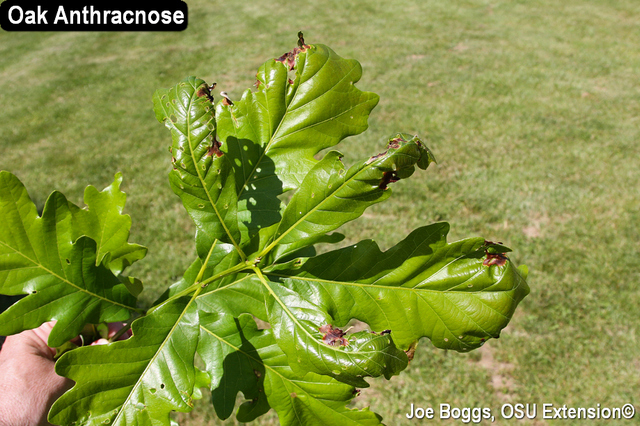 Heavy infections on lower branches may cause casual observers to overestimate the intensity of infections affecting the overall canopy.  Although leaf infections may appear dramatic, oak anthracnose rarely causes significant harm to the health of established oaks in Ohio.

The oak anthracnose fungus is host-specific; it only infects oaks.  The fungus does not infect sycamores to produce sycamore anthracnose and vice versa.  This is also true for other fungal pathogens that produce anthracnose diseases on maple, ash, and beech.  Each is specific to a single host type.

They may skewer newly expanding leaves or nascent leaves furled in the bud.  If they spear leaf tissue in the bud, the resulting holes on one half of the leaf will match holes on the other half.  Although the feeding holes are very small at first, they expand as the leaves expand to eventually give the leaves a characteristic “Swiss cheese” appearance. 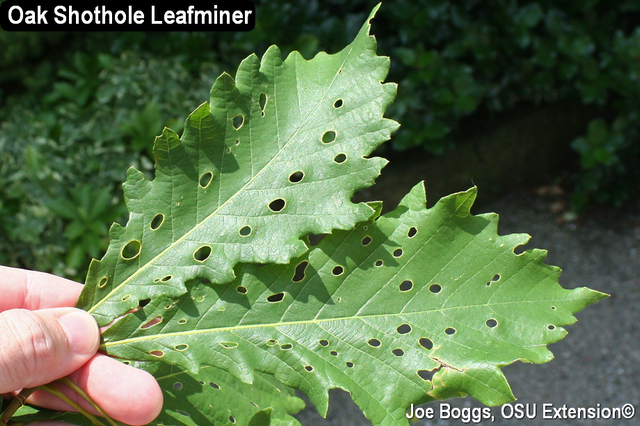 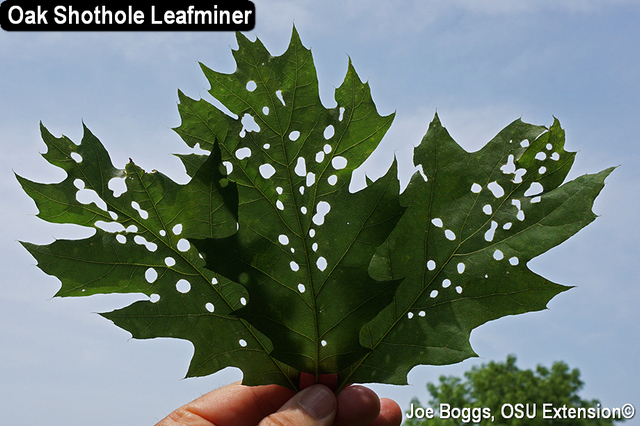 The leafmines are light green to tan but turn dark brown to blackish-brown once they're abandoned.  The damaged tissue eventually drops from the leafmines to produce large, sometimes ragged-edged holes.  Both the female feeding holes and the larval leafmining damage in the form of larger, irregular holes, remain evident throughout the rest of the growing season. 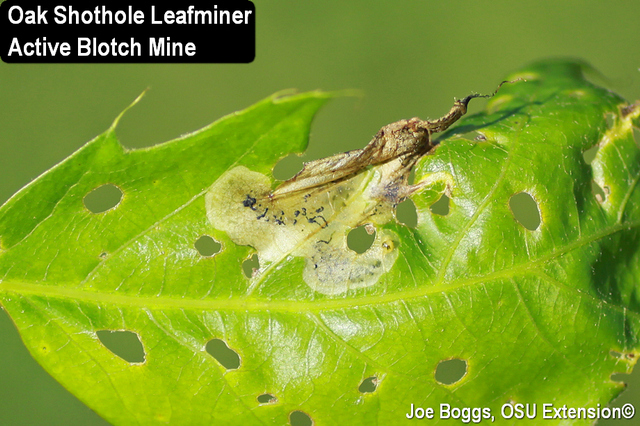 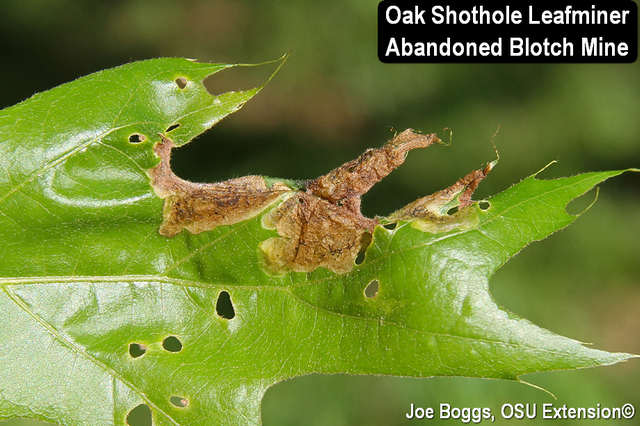 Oak shothole leafminer populations appear to have been very high this spring throughout much of Ohio.  Although their damage may be very evident and detract from the aesthetics of heavily affected trees, they cause little to no damage to the overall health of their oak hosts. 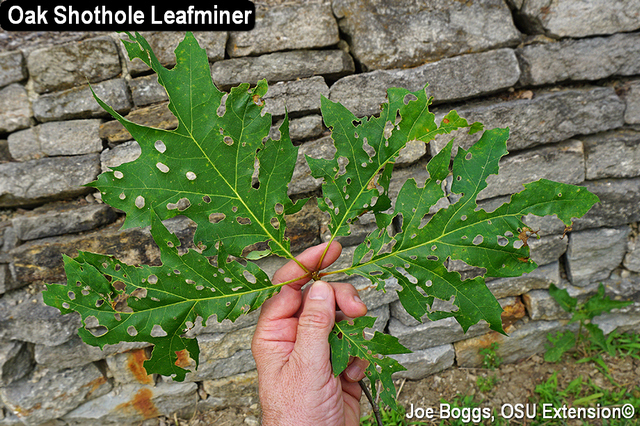 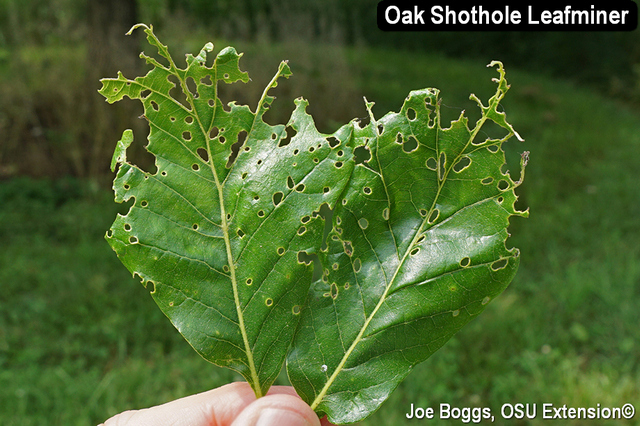 No clear cause has ever been determined.  However, possible candidates have included early season herbicide damage and freeze damage to the buds causing cells in the nascent leaf tissue to die producing missing leaf parts on expanded leaves.

Unfortunately, images of "oak tatters" posted on the web often show clear evidence of heavy damage caused by the oak shothole leafminer as well as oak anthracnose, or a combination of both.  I'm not suggesting that leafminer and/or anthracnose symptoms are the true cause of oak tatters.  However, I'm cautioning that we must separate these known causes of tattered oak leaves from the possible unknown cause behind oak tatters.