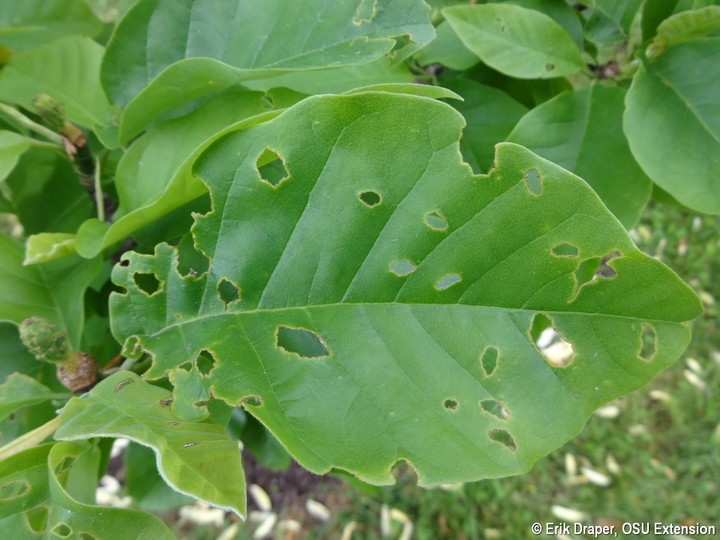 Whilst kicked back on my deck pondering the black clouds rolling in, I marveled at the ‘Yellow Bird’ magnolia that has been blooming for about 3 weeks now.  I was smugly congratulating myself on selecting a great plant for the Drapescape view, when suddenly my “diagnostic spider senses” went on full alert!

Something wasn’t quite right with the magnolia and as I carefully studied the tree from top to bottom, it became clear what had set off my senses.  Magnolias are not supposed to have holey leaves that look like swiss cheese!

Upon closer examination, I saw that it was not hail that had riddled the leaves, but Yellow Poplar Weevils (YPW) or Odontopus calceatus, having a picnic on the leaves of my magnolia.  Are these nasty, native weevils wacked out because a magnolia is definitely not a yellow poplar (Liriodendron tulipifera), which is commonly called a tulip poplar or tuliptree.  No, the weevils are not in a wild, tree feeding frenzy, but it is interesting to learn that the tuliptree belongs to the Magnoliaceae family too; obnoxiously therefore, they are able to easily feed on both species.  To further the mystery of the YPW, it has also been reported to feed on Sassafrass (Sassafrass albidum) leading to one of its other common names, the sassafrass weevil; quizzically however, the sassafrass is in the Lauraceae family and not the Magnoliaceae!

Adult feeding on leaves results in the appearance of their characteristic kidney bean-shaped holes.  Depending upon when they feed on the leaf, the holes may be small in mature leaves and quite large if they fed on young, rapidly expanding leaves; enthusiastically creating the “swiss cheese” effect, which initially drew my diagnostic spider sense!

Joe Boggs did an excellent job reporting on YPW damage in Central Ohio that he noticed on tuliptrees in July 2018.  Here in part is what Joe wrote, “The small (2/16" long), oval-shaped weevils (order Coleoptera; family Curculionidae) range in color from black to brownish-black to reddish-brown and have deeply grooved wing covers (elytra).  Although they are good flyers, the weevils often elect to fold their legs to "play dead" when disturbed; a defense strategy that is common among weevils.  In the eyes of some people, yellow poplar weevils resemble ticks which may generate calls to Extension offices concerning "flying ticks" during outbreak years.  Of course, ticks can't fly. 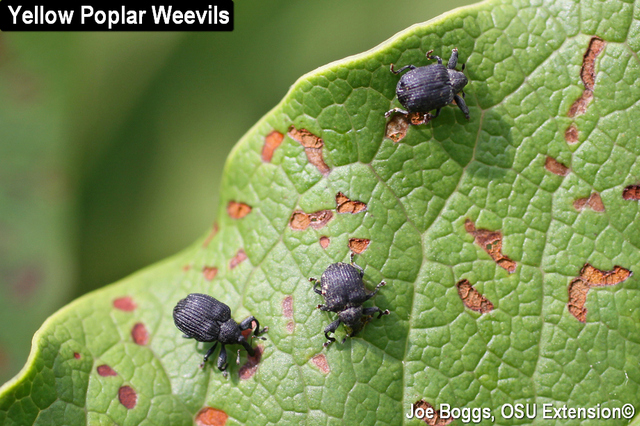 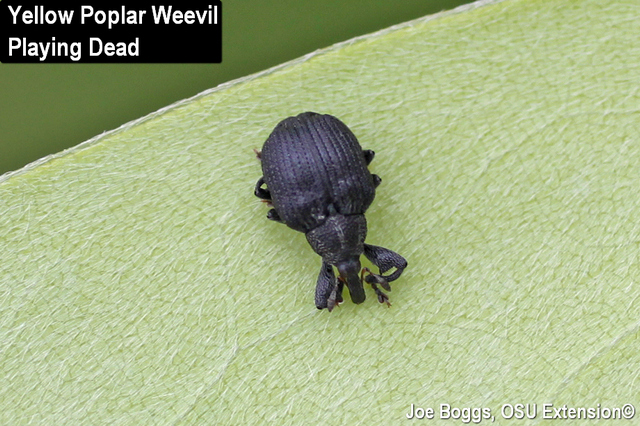 Adult feeding damage appears as characteristic half-moon-shaped holes in the foliage.  Numerous feeding holes can cause leaves to wilt, turn brown, and die.  Heavy damage is sometimes mistaken for drought damage.  Although the damage may be noticeable, it is seldom severe enough to damage the overall health of affected trees.  However, small, newly planted trees may be harmed. 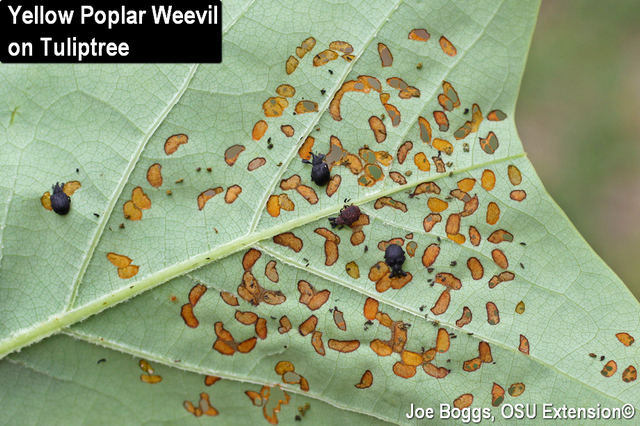 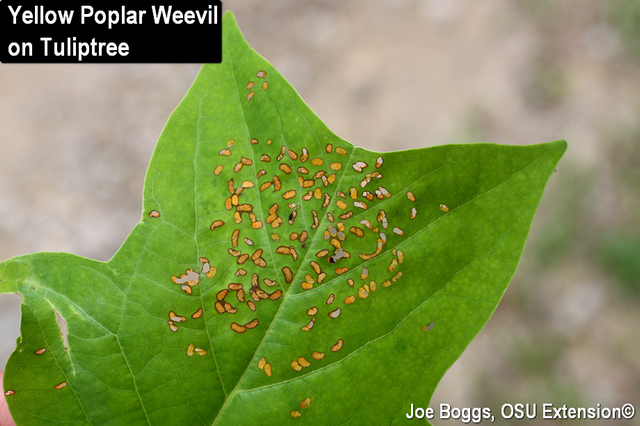 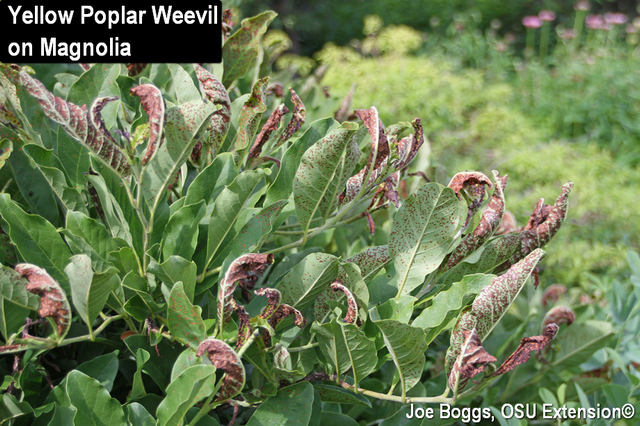 The literature notes that the blotch-type larval leafmines are most of often found on yellow poplar; however, I've found them on the other hosts as well.  The leafmining larvae feed either singly or in groups to produce large blotch mines.  Although larval leafmines are noticeable, the most serious damage is caused by the adults.  I had a twofer with also finding the silvery snaking handiwork produced by the Magnolia Serpentine Leafmining Caterpillar (Phyllocnistis magnoliella). 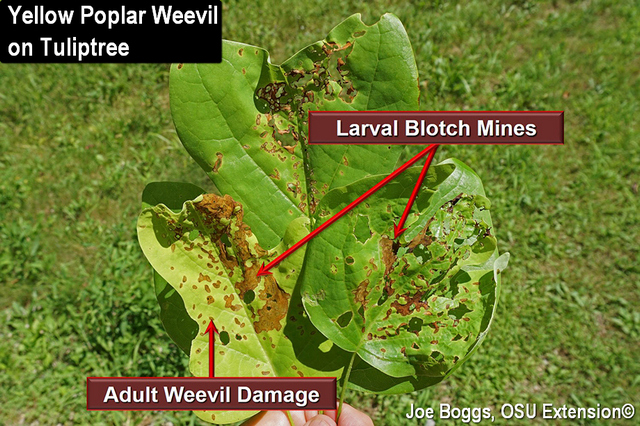 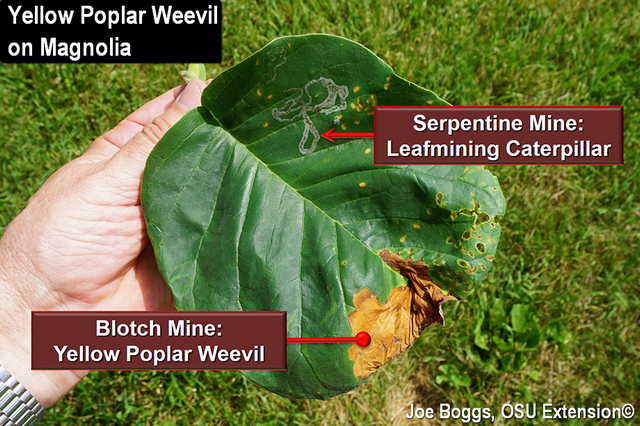 Yellow poplar weevils have one generation per year; however, adults feed twice during the growing season.  Adults spend the winter in protected sites such as the duff beneath trees.  They emerge in the spring to feed, mate, and lay eggs in leaf midribs.  This is the so-called "spring generation" of adults.  The "summer generation" arises from the leafmining larvae.  There are typically a greater number of adults in this generation compared to the spring generation meaning the most of the damage is done in early to mid-summer.  Although yellow poplar weevils are finished feeding in central Ohio, the damage will remain evident throughout season." 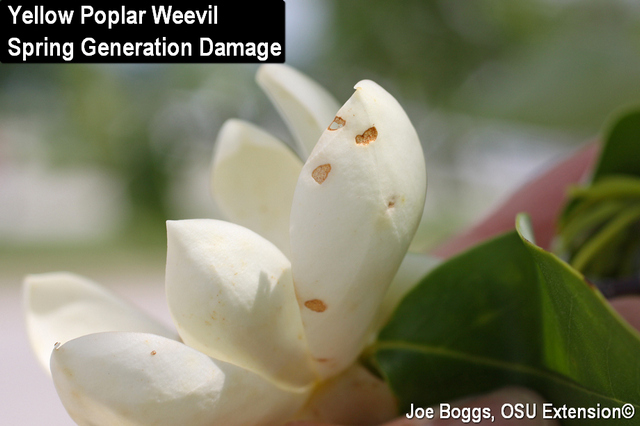