From Woodlots to Landscapes: The Impressive Dryad’s Saddle Polypore Fungus. 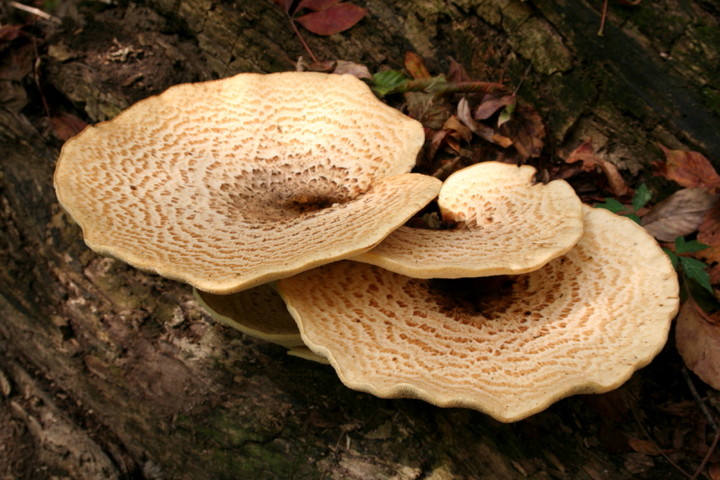 The Dryad’s saddle polypore fungus is also known as the pheasant’s-back polypore (Cerioporus squamosus; synonymy = Polyporus squamosus and Boletus squamosus). This fungus grows in and on the wood of both living and dead deciduous hardwood trees.  When found on a living tree, it would be considered parasitic causing a rot of the structural wood.  When found on a dead tree whether standing or on the ground, it would be referred to as being saprobic or simply a decomposer whose role is to recycle the nutrients and minerals that were tied up in the organic matter of the once living biological organism.  Thus, it is situational as to whether one would consider the Dryad’s saddle polypore to be beneficial or problematic.

Dryad’s saddle polypore is an easily recognized fungus that grows as a solitary shelf-like or plate-like structure to many overlapping shelves sharing a common connection point on the host tree. The polypore shelf is the reproductive unit of the fungus from which white spores are released.

The reproductive structure is an annual growth that can arise from early spring through late fall.  Although remnants of old shelves can persist into the following year.

The upper surface of a Dryad’s saddle polypore displays concentric rings of brown colored scales that gives the fungus the appearance of overlapping layers of feathers.  Thus, the reasoning for the alternative name of the fungus, pheasant’s-back polypore.  These scales can fade with age and nearly disappear resulting in a white to creamy white plain colored shelf fungus.  The underside of the shelf is white and covered by many pores (i.e. polyporus).  The pores are large and angular in shape.

The pores open into tubes.  Spores are produced on the surface of the tubes and released to the air through the pores. As mentioned before, the spores are white, thus the fungus produces a white spore print. The shelves are large and range in size from 3” to 18” in width and sometimes larger.

The shelf is typically connected to the tree by a thick, stub-like, eccentric stipe that is black at its base. The pores of the shelf are decurrent and extend down the stipe.

Occasionally, one can find a specimen with a central stipe and a nearly complete circular shelf affixed to it.  The flesh of Dryad’s saddle polypore is presumably edible when young and smells like watermelon rind when cut.

Fresh specimens of Dryad’s saddle polypore release water droplets that can be observed hanging from the underside of the pore surface. The term “dewatering” has been coined to describe the process.

Dryad’s saddle polypore is particularly common on living and dead silver maples (Acer saccarinum) and boxelder (A. negundo), but is not restricted to these species.  In woodlots, they are also commonly found on dead American elms (Ulmus americana).

Dryad’s saddle polypore produces a white heart rot in the wood of its host trees.  Heart rot is typically caused by a fungus that decays the wood in the centers of trunks and branches.  The infection causes the heartwood to soften resulting in a weakened structure of the trunk and branches, which are then prone to breakage.  The fungus gains entry into the heartwood through wounds from storm damage and/or pruning cuts.

Trees hosting Dryad’s saddle fungi over time will become hazardous.  Unfortunately, once infected by the fungus, there is no cure.  Since Dryad’s saddle is extremely common, it is difficult to avoid.  However, protecting the bark of a tree from damage and limiting the sizes of pruning wounds may help in reducing access to the fungus. Poor pruning practices such as tree topping and leaving “stubs” increase the chances for infection.

Why are these mushrooms referred to as Dryad’s saddles?  From Greek mythology, a dryad is a tree nymph, specifically nymphs of oak trees.  However, at some point in time, all tree nymphs became known as dryads.  Apparently someone, somewhere, at some time looked at this polypore mushroom and visualized a tree nymph sitting on it like a saddle to ride through the forests.  Potentially this individual might have been experimenting with some magic mushrooms and saw this vision…well, just a thought.  Maybe pheasant’s-back polypore should be the common name of choice after all!