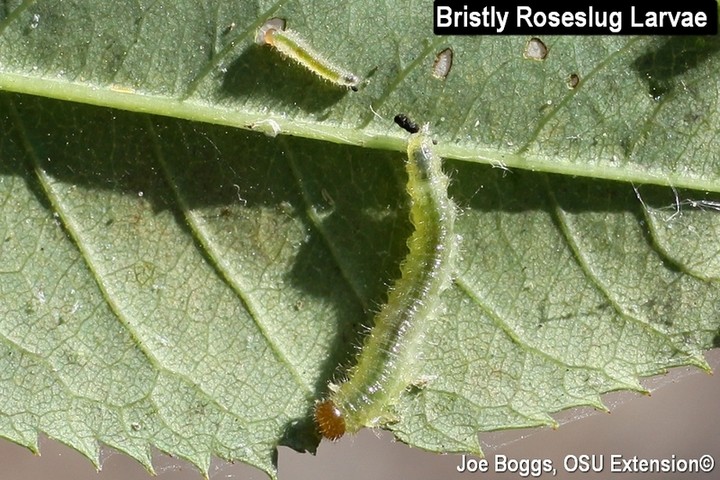 When I started working for Extension back when growing roses meant hybrid teas, the dominant roseslug sawfly (order Hymenoptera, family Tenthredinidae) was Endelomyia aethiops.  It was so common, the common name approved by the Entomological Society of America (ESA) for this species was simply Roseslug.

The roseslug only has one generation per season, so we didn’t worry too much about this sawfly.  The early-season leaf damage was quickly covered over by new leaves as the season progressed.  We would occasionally see the Curled Rose Sawfly (Allantus cinctus), but with only two early-season generations, this sawfly would come and go so quickly it seldom caused appreciable damage.

However, in recent years, these relatively innocuous sawflies have been largely supplanted in Ohio by the more damaging Bristly Roseslug Sawfly (Cladius difformis) which has multiple generations per season.  Damage from this sawfly starts in the spring and only ends with the first frost.  The expanding numbers with each new generation may produce heavy defoliation by the end of the season. 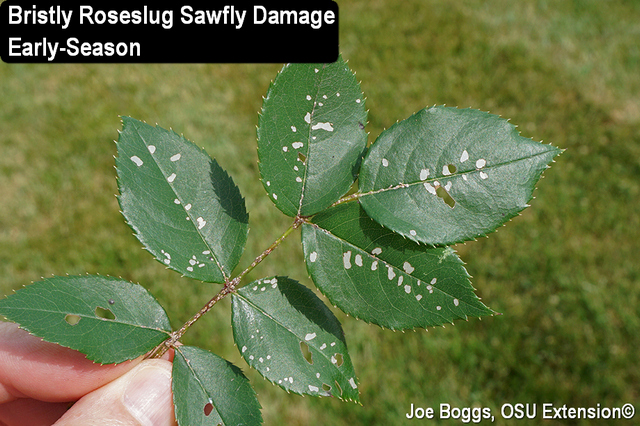 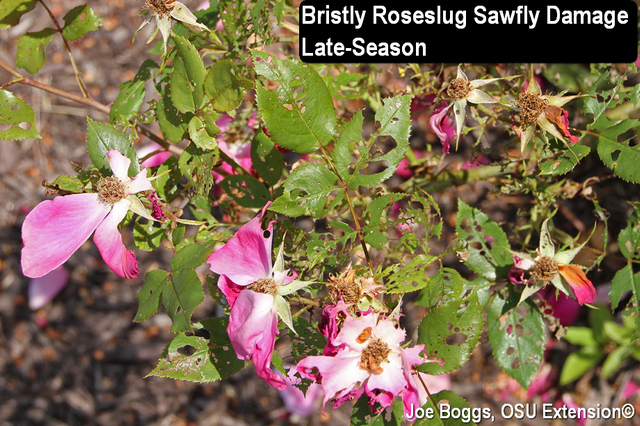 I'm not sure what changed.  The bristly roseslug sawfly is considered a European native that was accidentally introduced into North America.  However, the introduction probably occurred decades ago because it is now found through the continent.  Of course, one thing that changed during this time was the rise of shrub roses over hybrid teas as the dominant roses in Ohio landscapes.  I don't know of any host preference studies on this slug sawfly; however, there seems to be some preference for the shrub roses.

Early instar bristly roseslug larvae feed by removing one leaf surface and the mesophyll beneath. The corresponding epidermis on the opposite leaf surface remains intact and turns white producing a characteristic "windowpane" symptom.  Eventually, the "windowpanes" drop out to produce holes. 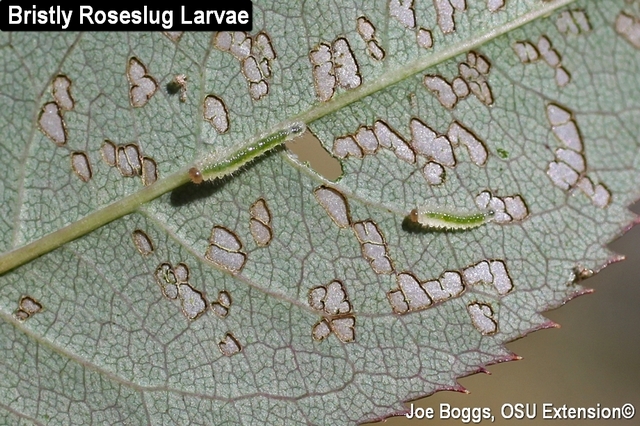 Later instars feed between the main veins to directly produce holes in leaves.  Heavy feeding damage by early and late instars may combine to produce "see-through" leaves.  We have commonly observed this type of damage from bristly roseslugs over the past few years in southwest Ohio. 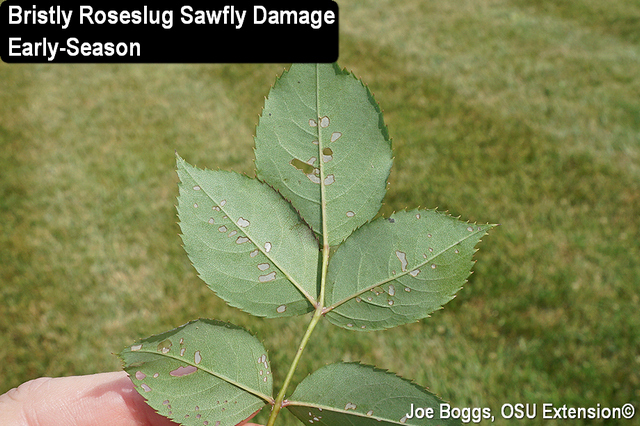 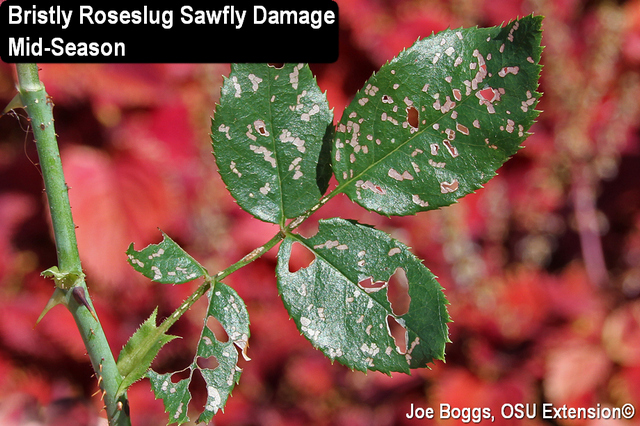 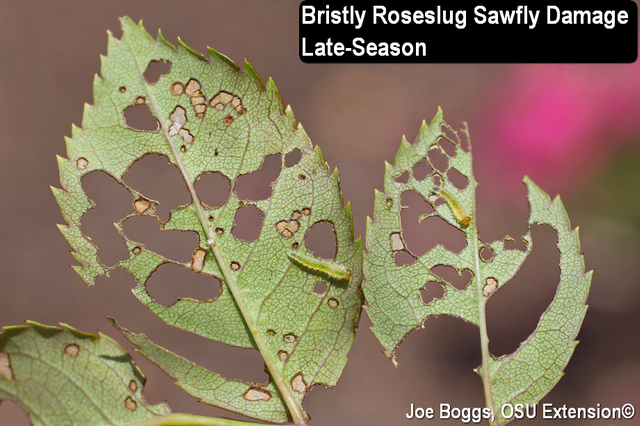 You must look closely to spot the pale green semi-transparent sawfly larvae.   Despite their common name, the larvae of roseslug sawflies resemble tiny caterpillars and look nothing like the glistening, elongated pear-shaped "slug sawflies" which do resemble tiny slugs.  As their common name indicates, bristly roseslug sawfly larvae are covered with short, hair-like bristles that can be best seen with a hand-lens.

Control and prevention of further damage depend on proper identification of the true culprit.  Only the bristly roseslug is worthy of control measures because it continues to produce damage throughout the season.

Biorationals such insecticidal soaps are effective, but direct contact is necessary.  Products containing spinosad (e.g. Conserve, Entrust) are effective against sawfly larva and will also have less impact on bio-control agents.  Chlorantraniliprole (e.g. Acelepryn) is also effective and presents a low risk to pollinators.  Soil drench applications of systemic insecticides such as imidacloprid (e.g. Merit) or dinotefuran (e.g. Safari) are effective and provide lengthy protection. 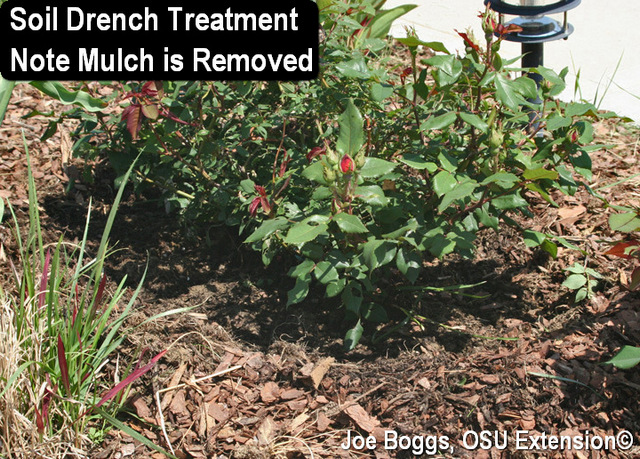 Although roseslug larvae look like caterpillars, products based on strains of the bacterium Bacillus thuringiensis (Bt) that are specific to controlling moth caterpillars (order Lepidoptera) will have no effect on these primitive hymenopteran larvae.