Authors
Jim Chatfield
Published on
May 2, 2019 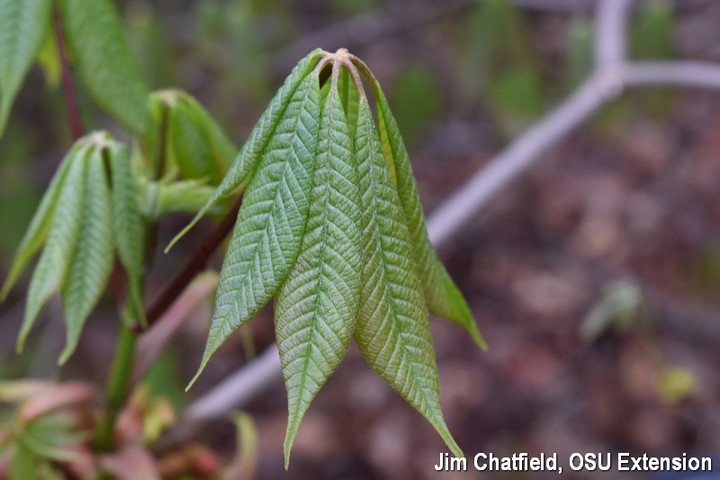 On Tuesday, despite the misting rain, I felt it would be horticultural malpractice to not get outside for a walk, camera in hand, at OSU’s Secrest Arboretum in Wooster. The plants outside stopped sleeping/the amphibians still are peeping/buds leaves flowers and fruits are here/It’s the greenest time of year. What did I see?

First up are Deciduous Conifers. Needles and cones – evergreen, right? Not always. We have four genera of conifers that lose their needles in the fall in Ohio: dawnredwood (Metasequoia), baldcypress (Taxodium), larch (Larix), and goldenlarch (Pseudolarix). Check out the compound names of dawnredwood, baldcypress, and goldenlarch, denoting that these trees are not true versions of redwoods or cypresses or larch, but different plant types, kind of like pineapple is not a pine or apple. Enough. I feel like a comma queen or at least a grammar grand-duke or a punctuation prince!

More importantly, these trees are fascinating as their new needles emerge for the year. Come see a twisted stem version of the Japanese larch, the cultivar ‘Diana’, showing just a touch of cold injury but with soft green needles and unusual curvy stems. Cold injury? When could it occur – when was our last frost, anyway - March? What a great spring. Goldenlarch and dawnredwood needles are just emerging and are wonderful against the sky.

Next, near the Children’s Garden at Secrest is a Camperdown elm, though the exact relationship to the original contorted sport found at Camperdown House in Dundee, Scotland is obscure, at least to me, though the original Camperdown was apparently grafted onto Ulmus glabra. Like American elm (Ulmus americana), Camperdown elm produces its flowers and fruits in spring, unlike the lovely lacebark elm (Ulmus parvifolia) with its late summer flowers and subsequent fruits.

Years ago, in the old Shade Tree Plot at Secrest, a heavy late fall wet snow got caught up on still present lacebark elm fruits and the weight resulted in major branch breakage. As for the lovely low-growing “Camperdown-ish” elm at Secrest, they are in heavy fruit now, and are a light, fresh green delight.

Culinary note: I should probably serve these wafer-like fruits in a vinaigrette. I did once partake of an elm -fruit salad in China. Vinegary; about the same flavor as goldenraintree shoots or willow leaves in vinaigrette at a restaurant at the Great Wall. Speaking of fine dining, when I googled Camperdown elm, I noticed there is an Camperdown Elm restaurant in Park Slope, Brooklyn. Since it is a few miles from my daughter’s apartment I shall have to try it out soon. Hmm, let’s check the menu: “Crackers made with squid ink topped with a paté of mackerel.” I’ll bet it goes great with marinated elm fruits!

Crabapples. Those who know my crabarian ways now will expect a pome tome, but I shall resist except to say that a number of crabapples have already started to bloom at Secrest, but many are in that most perfect malusarian moment: when buds and their inner blossoms are of different color combination. There is a 2-3 week span from the earliest to the latest crabapples for bloom, so there is no one time for all, but I decree that this weekend and early next week will be the Crablandia Peak. Come scale Secrest.

New Leaves. Do not. Do not miss this. There is nothing more wondrous in nature and so easy to miss than the emergence of new leaves and their accoutrements this time of year. Nurserymen and landscapers and garden center professionals and arborists are so busy they have little time to pause for a few moments. The rest of us may not pause in the yards if there is a sprinkle or two. End-of-school activities deflect us. But just do it. Take some time each day to focus your attention and even to make your own weather and note how lovely reawakening life arrives.

The tiny miniature leaves of oaks along with their dangling flowers. Hostas swirling and rising from their winter slumber. Ladys-mantle with it hydrophobic leaves pooling crystalline water droplets. The many versions of maples unfurling and often paired with their often not noticed flowers. The otherworldly sticky buds bursting and unraveling into leaves of horsechestnuts and their hybrids.  Check all of this out at Secrest or at a park or landscape or streetscape or backyard or balcony near you.

Rhododendrons. A few azaleas are out at Secrest, but the glory of the genus Rhododendron is yet to come. Nevertheless, I share here one rhododendron picture. My office on the second floor of the Old Administration Building at the OARDC in Wooster is the one on the second floor with the air conditioner attached. Visit sometime and I will try to take you to the tower of the building, or at least to the tunnels below. If.  If the rhododendron has not swallowed me up by then: I advise you come before my retirement in the year 2525…If man is still alive…If woman can survive…

Flowers. With buds like pearls, as in pearlbush (Exochorda). Butter yellow flowers on a cucumbertree hybrid (magnolia). A panicle of flower buds on red buckeye. Sassafras flowers; here for only a short time. Soft pink Carolina silverbell flowers each subtended by a chocolate-colored calyx (the floral envelope made up of sepals behind the petals). Common lilac flowers bursting from buds right on its growing degree-daytime schedule of 234. River birch catkins (the male flowers) filled with pollen. Headily sweet aromas of fragrant viburnum blooms.

Buckeyes. The flowering period for Ohio buckeyes, horsechestnuts, and buckeye-horsechestnut hybrids is past for Secrest, but red buckeyes and later yet, bottlebrush buckeyes are yet to flower. Nevertheless, the flower buds of red buckeye and the wonderfully creased leaves just emerging on both of these buckeyes are outstanding now.

A Final Disease (or Three). Cedar rusts. Joe Boggs did a more complete job with wondrous images in a recent bygl-alert (Rusts Arise :node 1244), but there can never be enough pathological parsings. Cedar rust diseases are a fascinating example of plant host range. To complete its life cycle and the plant disease cycle, the fungus must go through an elaborate ballet of spore stages while spreading from junipers (Eastern red cedars) to a rosaceous host, such as apple/crabapple, hawthorn, quince and serviceberry, among other members of the rose family. Right now the dance consists of microscopic spores emerging enmasse from spectacular abnormal growths (galls) on the juniper, blowing in the wind, randomly answering the call of a windward rose family host.

Lacking Marvelesque microscope-eyes, we will not see their arrival on the hawthorn et al, their infection thereupon, or their conjugal visits with each other, but will see them again when a new spore mass emerges on the underside of the leaves and on fruits. For now, though, what we see is the orange spore horns emerging on the junipers. Risking a pie in the face from an apple orchardist, I will say, the orange telial horns emerging from the galls on junipers now is as pretty as a (admittedly) garish flower.

My final, and I have heard for years by professional landscapers and home gardeners alike – controversial – flower pick right now is –sweetgum, Liquidambar styraciflua. Oh, the wonders you’ll see, if only you look.  Right there along with the much-maligned mace-like gumballiferous fruits from the past season, are the cool tiny gumball female flowers and the male cone-like pollen-bearing flowers nearby. Exquisite, even if you hate later cleaning up the eventually brownish, spiky, fruits unpleasant for landscaper equipment and barefoot gardener feet.

All this - and much more on a short Spring Sojourn Walk at Secrest.