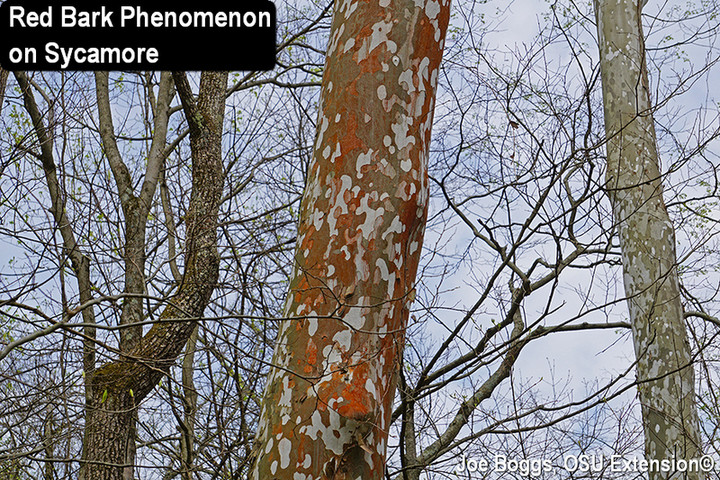 Last Wednesday, Jerry Frankenhoff (Urban Forester, Great Parks of Hamilton County) sent an e-mail message asking about red staining on the bark of sycamore trees (Platanus occidentalis).  He wrote that he'd never seen anything like this before.  I was shocked when I looked at his attached image.  Likewise, I had never before seen the unusual reddening symptoms on sycamores or any other tree. 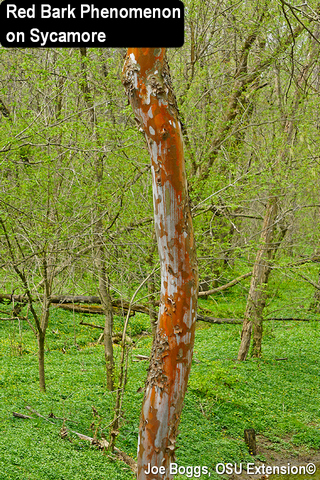 Jerry sent a map showing the locations of two trees along Kingfisher Trail in Winton Woods and I visited last Thursday.  The first affected tree was relatively small and growing several feet off the trail from a stream bank.

The reddening was dramatic; the tree almost looked like it was oozing blood.  In fact, the first thing that leaped our minds was that someone had blasted the tree with a paintball gun!  Although some of the affected areas were at eye-level from the trail, the tree was too far away from the trail and the affected area too high above the ground to get a close look.  However, the overall pattern didn't support a diagnosis that the tree was targeted with salvos of red dye. 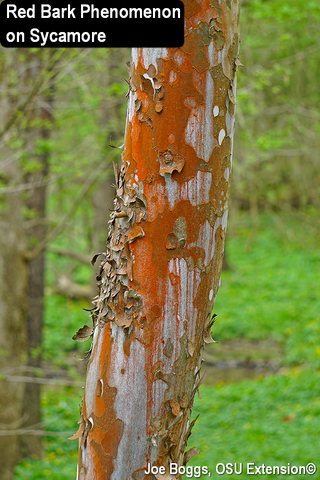 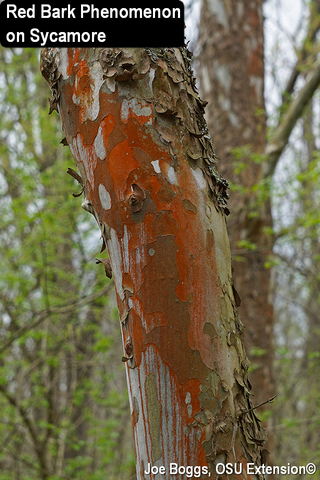 The second tree was located some distance from the stream next to the trail as it climbed towards a ridge.  The tree was much larger and double-trunked with one trunk most heavily affected.  Likewise, the reddening starting around 15' above the ground and extended high up the trunk making it impossible to get a close look. 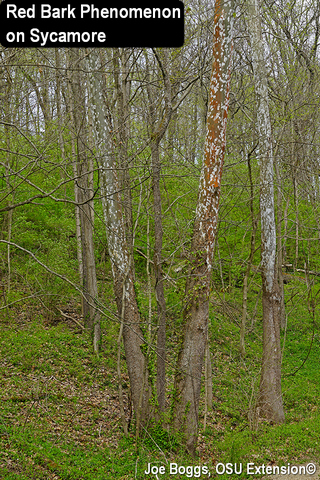 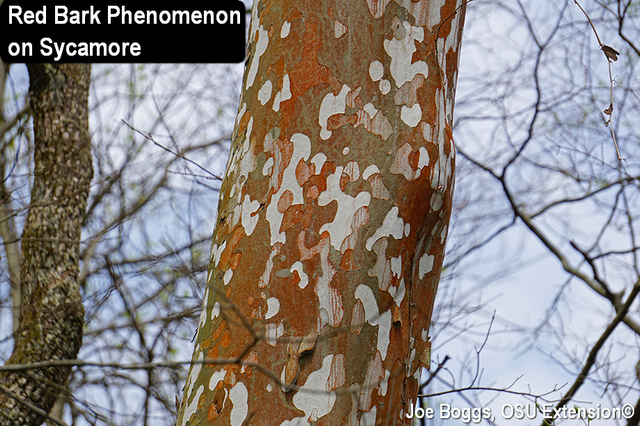 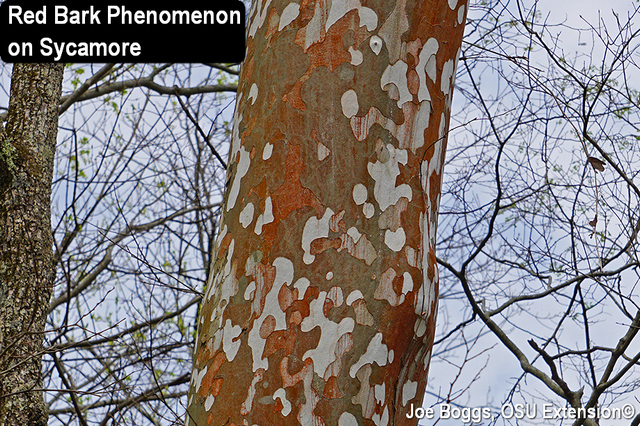 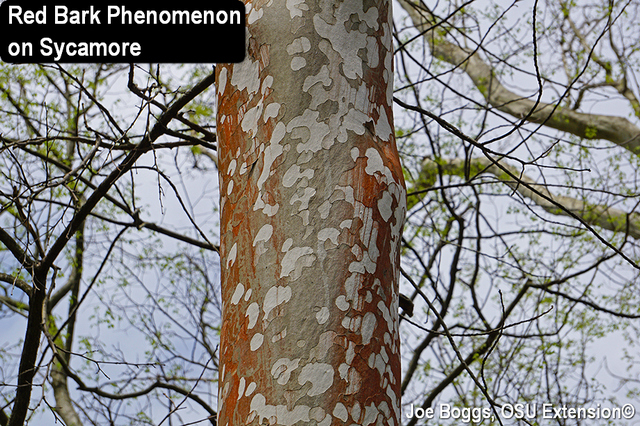 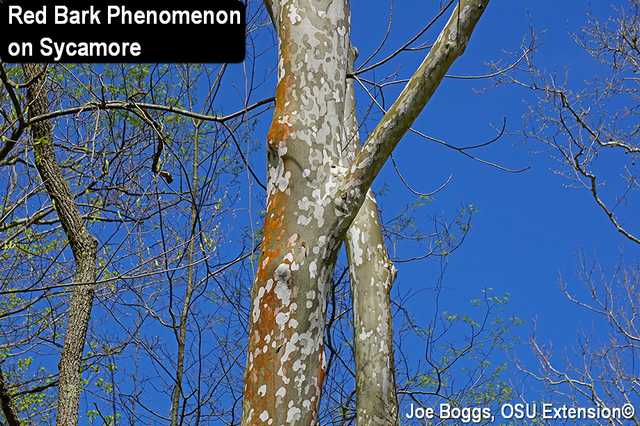 On Friday, Jerry reported that he found the same symptomology on sycamores in the Cedar Bend picnic area in Shawnee Lookout.  We visited this past Monday and found the bark reddening was occurring on both sycamores and London planetrees (Platanus × acerifolia).  Also, symptoms were at eye-level allowing us to closely examine the phenomenon and use a drawknife to reveal that the coloration was confined to the bark surface; there was no evidence of bark penetration. 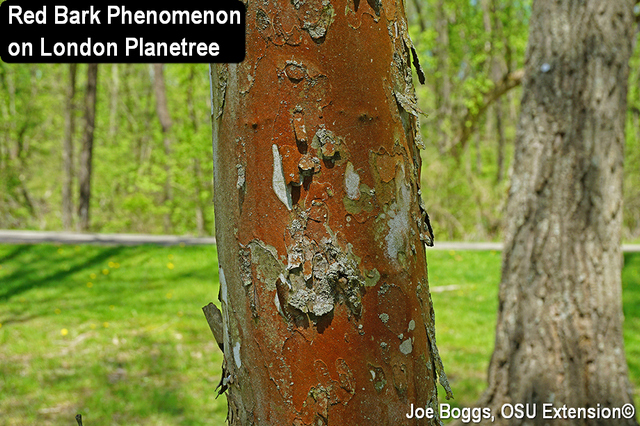 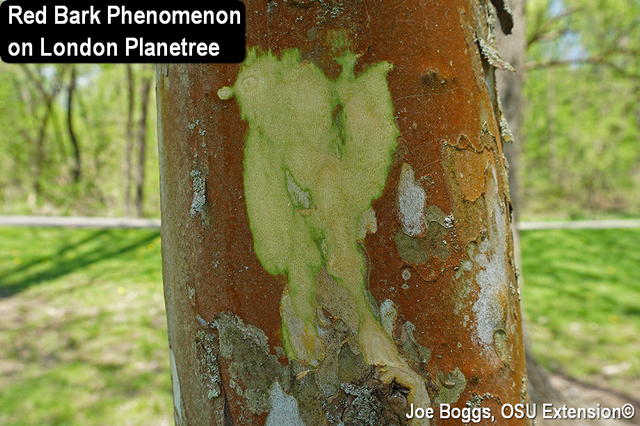 During a phone conversation on Monday with Jim Chatfield (OSU Department of Horticulture and Crop Sciences and Department of Plant Pathology), he noted that Philip Marshall (Forest Health Specialist, Indiana Division of Forestry) had sent an e-mail message on March 30, 2019, reporting sycamore bark reddening in Madison, IN.  Philip observed the symptoms this past January and sent samples to Gail Ruhl (Senior Plant Disease Diagnostician, Purdue Plant and Pest Diagnostic Laboratory).

Gail tentatively identified the causal culprit as an alga based on a microscopic examination and a report of a similar phenomenon from Connecticut.  She noted that there appeared to be no associated damage to the bark or cambium.  In follow-up e-mail messages with Gail and a phone conversation with Philip, I learned that both suspected close proximity to streams played a role in the development of the algal growth on the sycamore bark.

They describe red bark phenomenon (RBP) as "a distinctive reddish-orange crust or film which coats bark plates, fissures and ridges or smooth trunk surfaces and has been observed on both individual or small groups of diverse trees and in whole tree stands."

Their report notes, "trees appear to be of varying age classes, and are often, but not exclusively, observed near bodies of water, such as swamps or rivers.  Aspects of the tree trunk affected with this coloration ranges from the north to west and occasionally on the southwest aspects, usually on one side of the tree."

They note that RBP has been observed in several New England States and surveys revealed that the condition may be found on over 20 tree species including both conifers and hardwoods.  RBP in Connecticut was most prevalent on white pine, eastern hemlock, red oak, and American beech.  Others had observed RBP on apple; green ash; white, yellow, and sweet birches; black cherry; American elm; pignut and shagbark hickories, European larch; Norway, red, and sugar maples; chestnut; black, scarlet, and white oaks; red pine; and Norway spruce.  However, sycamore and London planetree are not included in their report.

The authors tentatively identified the causal agent behind RBP as a filamentous green alga belonging to the genus, Trentepohlia.  They were uncertain of the exact species and even postulated the species is yet to be described.  However, they note that large quantities of carotenoids and haematochrome in the alga's cytoplasm masks the green of the chlorophyll and is responsible for the orange-red color on the tree bark.  They also observed that the alga is a surface condition and does not appear to penetrate the bark or cambium.

RBP appears to be a likely diagnosis of the bark reddening observed on London planetrees in Ohio, and sycamores in both Ohio and Indiana.  However, the lack of reports that RBP occurs on these species in New England should instill caution.  Also, we observed obvious streaking making the trees look like they are bleeding.  This dramatic symptom was not noted in the descriptions of RBP and does not appear in any of the images included in the Connecticut report.  On the other hand, perhaps this symptom only appears on smooth bark because the crusty reddish-orange deposits we observed on the heavily plated mature bark of sycamores and London planetrees matched descriptions of RBP on other trees. 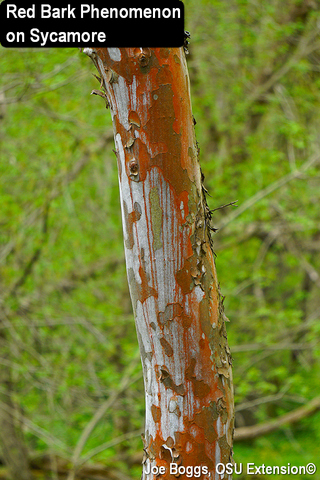 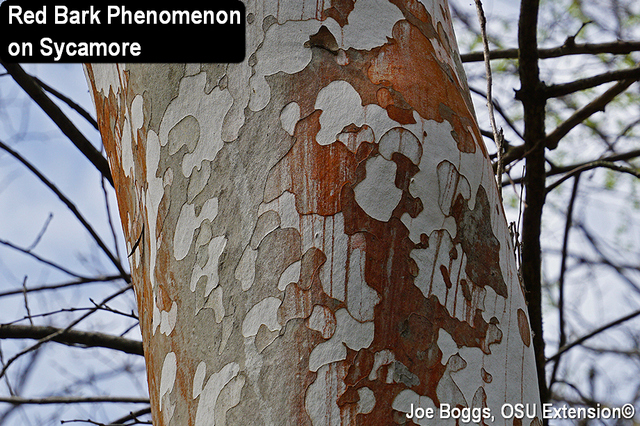 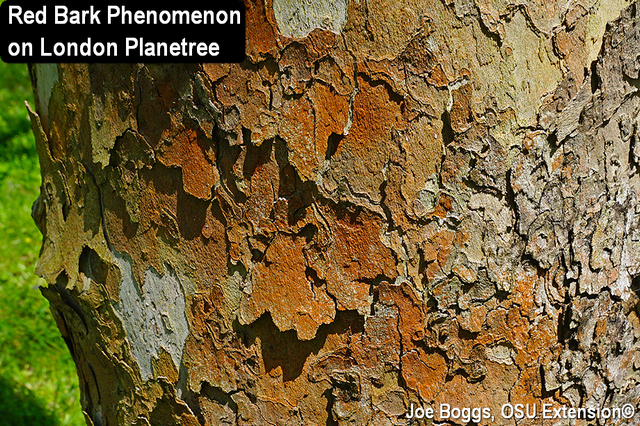 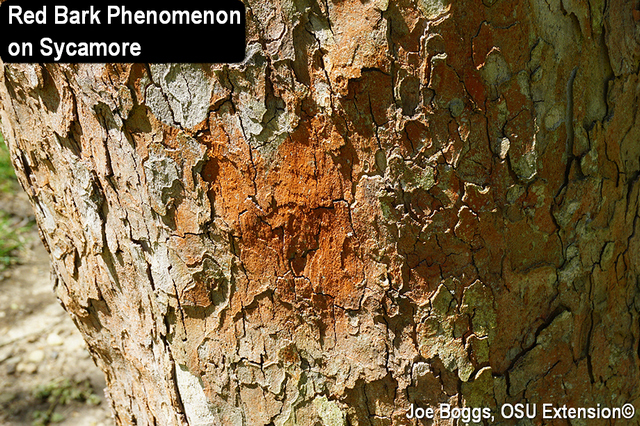 We Need Your Help

I spoke with Tom Macy (Forest Health Program Administrator, Ohio Department of Natural Resources) today and whether or not it's RBP or some other condition, we need your help with surveying for this bark reddening phenomenon.  I also plan to send samples to our Clinic to learn more about the possible causal agent.

If you observe bark reddening on sycamore, London planetree, or other tree species listed with RBP, please send me your reports including the following:

- Environmental conditions (e.g. near a stream, lake, or otherwise)

- Pictures would be hugely helpful.