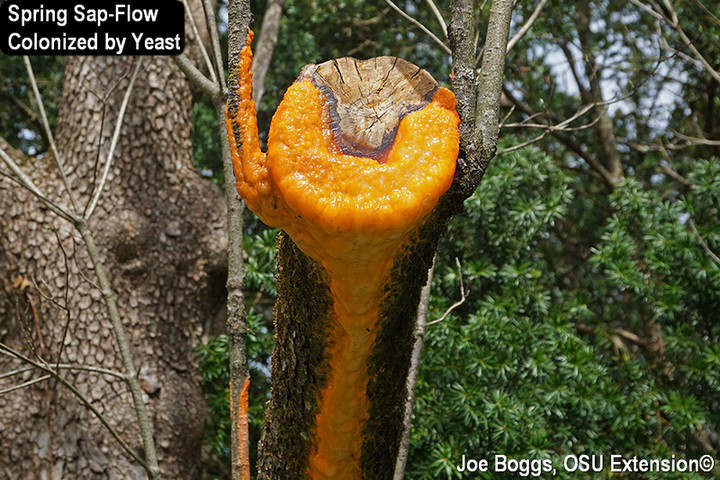 From my perspective, one of the most rewarding things about plant problem diagnostics is not just achieving a successful diagnosis; it's what we learn from the instructive twists and turns along the way.  Arthur Ashe captured it nicely, "Success is a journey, not a destination. The doing is often more important than the outcome."

Such is the case with the subject of this Alert.  Participants in our Greater Cincinnati BYGLive! Diagnostic Walk-About this past Monday held in Spring Grove Cemetery and Arboretum were treated to a colorful display of bright orange viscus goo that appeared to be issuing forth from a flowering dogwood (Cornus florida). 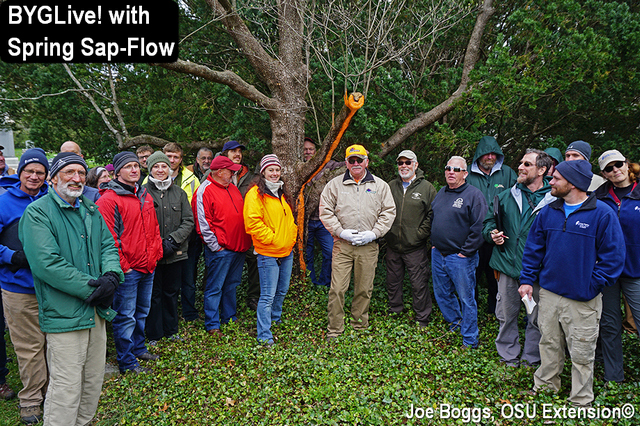 Looking like a bubbling brew cooked up in black water Hattie's shack, I identified it as bacterial slime flux.  However, after  checking the literature (while humming Jim Stafford's song), I had to re-think my diagnosis.  I experienced a sharp turn on my diagnostic pathway which gave me some new perspectives. 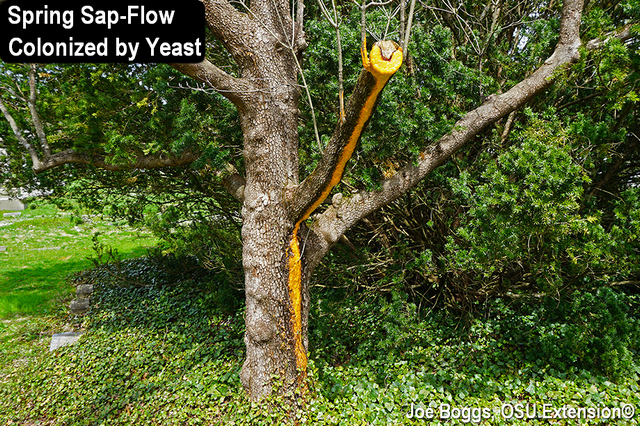 Leaking trees can be caused by three things:  chronic slime flux associated with wetwood; short-lived, spring sap-flows; and foamy, alcoholic "white flux."  The key to separating these sources of tree leakage rests with understanding both the origin of the leakage and the colonization of the fluids by various microorganisms.

The exact nature of slime flux and the associated wetwood deep inside the tree is not clearly understood.  Wetwood is discolored water-soaked wood that may include both the heartwood and sapwood of the xylem.  The affected wood has a high concentration of solutes which draws water through osmosis from the unaffected sapwood.  The resulting "wet wood" has a much higher moisture content than even the sapwood making the affected zone anaerobic. 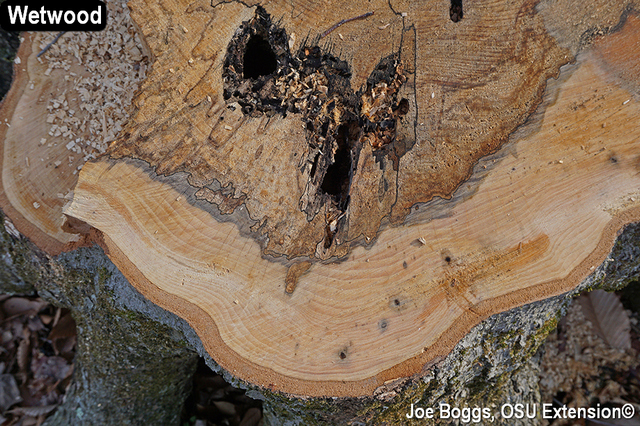 Numerous species of bacteria have been isolated from wetwood.  Many are naturally found in the soil and enter the tree primarily through root injury which can be “natural” such as drought or freeze damage, or unnatural through physical injury.  The bacteria thrive in the anaerobic conditions of the wetwood and as they digest the wood fiber, they release various gases including methane.

The gasses build pressure to a point where fluids are forced out of openings in the tree such as old wounds.  The colorless fluid has a foul odor and seeps down branches or trunks.  It can become colored (yellow, red, etc.) primarily by yeast fungi that colonize the seeping fluid. 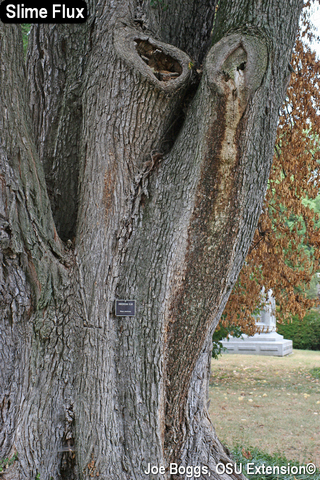 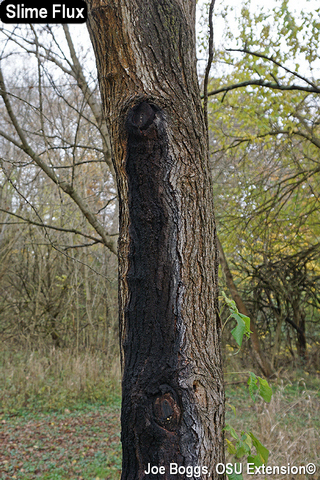 The slimy, fluxing fluid is called bacterial slime flux because of its connection to bacterial activity.  However, the chicken or the egg causality question between bacteria and wetwood has never been clearly answered.

It remains unknown if the high solute concentration that draws water into the wood is simply due to the presence of bacteria, or if bacterial digestion of living sapwood cells releases solutes, or if the concentrated solutes are just a natural occurrence as living sapwood dies.  In fact, some wetwood has very low levels of bacteria.  Conversely, research aimed at determining if bacteria isolated from wetwood can induce the condition has proven inconclusive.

It is known that although the unsightly bacterial slime flux may last several months and recur for many years, it's mainly an aesthetics problem.  Other than perhaps indicating a structural defect that should be investigated, it appears to have little impact on overall tree health.  However, wetwood presents a significant problem for the wood products industry by seriously degrading lumber quality.

Spring sap-flow occurs when sap simply seeps from relatively recent tree wounds, or from wounds that have failed to close.  As the name implies, this occurs during heavy periods of sap flow in the spring meaning that it's often a fleeting condition that ceases once the wound closes.  The sap can quickly become colonized by fungal yeasts which may give it strange colors including deep reds, oranges, and yellows. 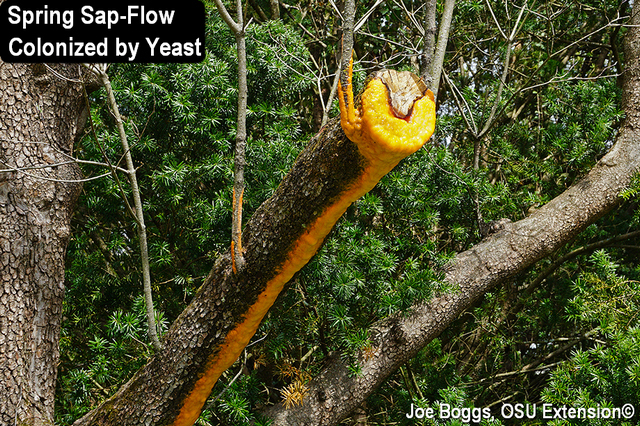 It's important to note that despite the deceptive appearance that the colorful goo is oozing out of the tree like toothpaste, the sap issuing from the tree is actually clear in color.  It only looks like something out of black water Hattie's shack after it is colonized at the surface by the yeast.  This is an important distinction because the sap-flow is colonized under aerobic conditions whereas bacterial slime flux arises from anaerobic conditions. 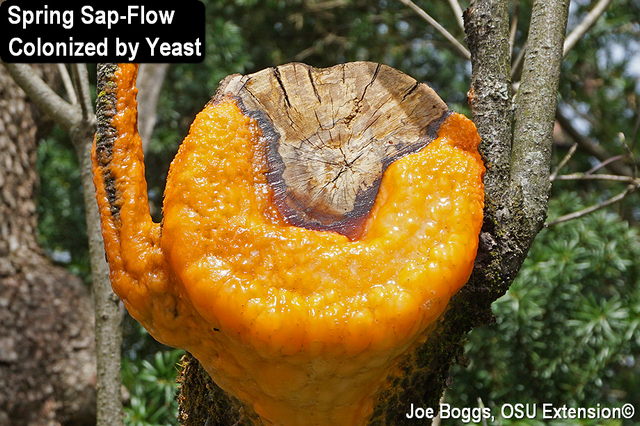 Unlike bacterial slime flux, spring sap-flow does not indicate a possible structural degradation deep inside the tree.  It's an important diagnostic point.  As you can imagine, this would be an awkward conversation with a client:  "I have good news and bad news.  The good news is that after cutting-up your tree, we didn't find any wetwood; it was just spring sap-flow.  The bad news is …"

I now believe spring sap-flow that has been colonized by a colorful yeast was responsible for the peculiar bubbling ooze flowing down the Spring Grove dogwood.  This is supported by a research paper that highlighted a connection between a particular "red yeast" and spring sap-flow from giant dogwood (Cornus controversa).

The researchers noted that the yeast produces a carotenoid which imparts an orange color to the bubbling brew.  The bubbles arise as the yeast ferments sugar in the sap to produce alcohol.  In fact, we saw bubbles in the ooze on the Spring Grove dogwood and noticed a sweet, fermentative odor which does not fit with the foul, sulfurous odors emitted from bacterial slime flux. 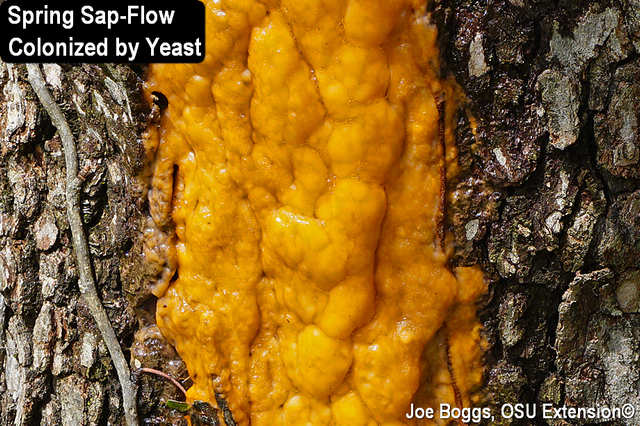 Frothy, white fluid issuing forth from a tree indicates a more serious condition.  It's sometimes called alcoholic frothy flux because sugar in the sap leaking from affected trees is converted into alcohol by colonizing microorganisms.  The frothing is produced by carbon dioxide released during fermentation.  Of course, the effluent has a distinctive fermentative odor. 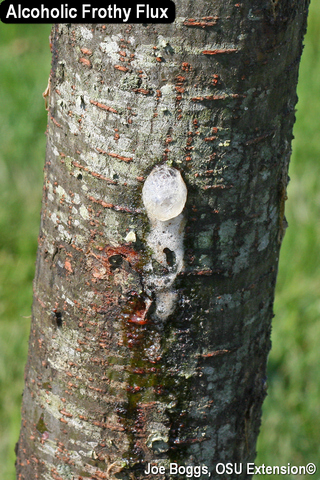 The flux is highly attractive to a number of insects in search of an adult beverage.  These include flies as well as various wasps such as yellowjackets, paper wasps, and bald-faced hornets.  There is nothing worse than a gag of drunk, belligerent hornets cruising around in their black jackets! 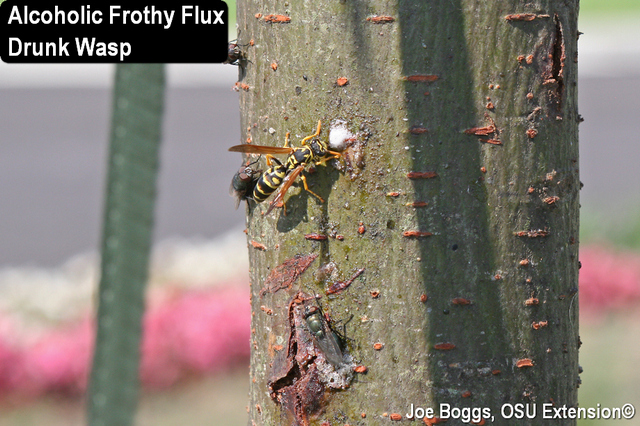 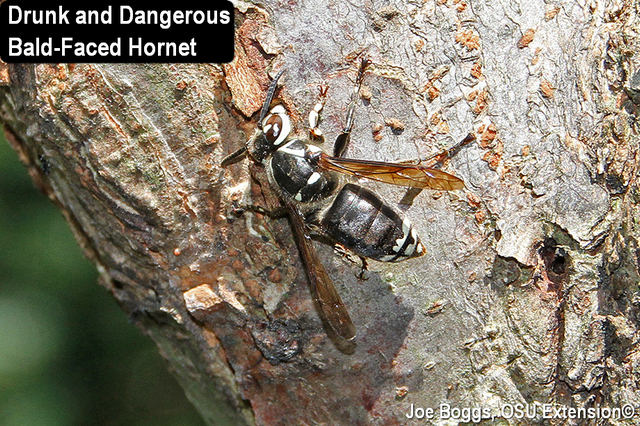 Alcoholic flux is associated with a number of conditions that cast a shadow on the overall health of affected trees.  Chief among them is severe tree stress.  Several years ago, I diagnosed alcoholic frothy flux on newly planted lacebark elms (Ulmus parvifolia) in parking lot tree islands.  The islands were almost constantly irrigated for almost three weeks while the irrigation system was being balanced.  Ultimately, around 75% of the trees had to be replaced.