Chestnuts Roasting on an Open Fire... 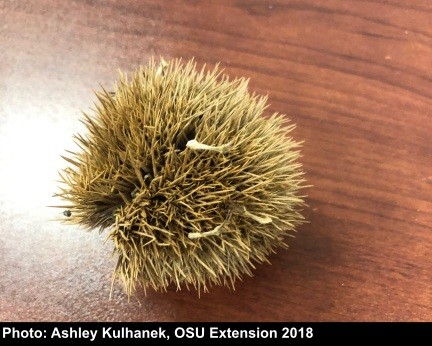 A diagnostic sample this week had me thinking about this yuletide carol.  A visitor brought a bowl of chestnuts to the Extension Office this week.  This tree has been producing for many years, but the nuts within never fill out into the round tasty treats associated with the holidays.  What is going on? 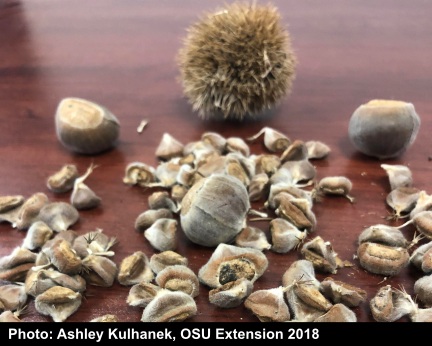 Chestnut trees (Castanea sp.) produce nuts that come enclosed in sharp, spine-covered husks known as the bur.  (And when I say sharp, forget stepping on a sweet gum fruit, these burs bite!)  The whole bur ranges in size from 2 to 3.5 inches wide.  Within the bur there will be 2 to 4 compartments containing edible nuts, chestnut brown in color, ranging from 0.75 to 1.5 inches wide.  But that is NOT what we found within these burs. 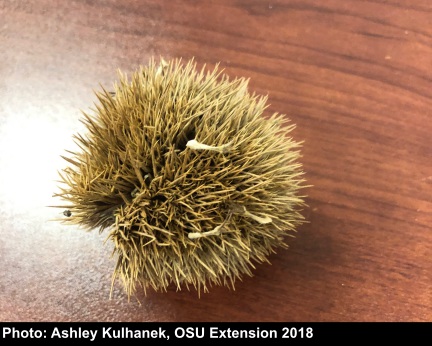 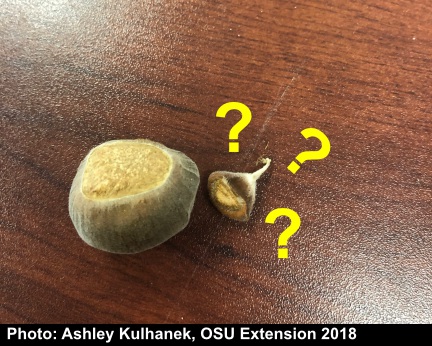 Normally, chestnut burs will ripen and split open in fall, dropping the mature nut.  However in this case very few mature nuts are being found and many stunted and deflated nuts are present within the burs.  So what fiend is responsible for such an inedible crop?  What is suspected here is almost certainly poor pollination.  According to the University of Florida, "Incomplete pollination will result in only one to two nuts forming within the bur, the remaining nuts will not fill out" (Hochmuth et. al., 2009).  That is because chestnuts are self-sterile.  While each chestnut tree does possess both male and female flowers, it must receive pollen from a second source to produce a bountiful harvest!  And since Chestnut Blight wiped out nearly every native American Chestnut in the US, there aren't reliable pollen sources growing readily around to rely upon.  Greg Miller from Empire Chestnut recommended a second tree needs to be within at least 100 feet, but preferably within 40 feet, to get increased nut production here.  It is strongly recommended that when planting for production, multiple trees be planted to promote cross-pollination and encourage successful nut formation into the future.  One publication recommended an "8 to 1 ratio of production trees to pollinizer" for commercial production (Hochmuth et. al., 2009).

So with any luck, a newly planted tree will increase pollination of this specimen and help to increase production for hungry animals and homeowners alike!  Just watch those bare feet!

There was a time when American Chestnut trees were the king of the Eastern forest.  It provided a desirable and protein-rich food for wild animals from birds to bears, and livestock too, particularly hogs.  Chestnut lumber was a light yet strong, rot-resistant option for all manner of furniture and construction.  And yes, the nuts were not only a sweet tasty snack for holiday merry-making, but also as a dependable food source to eat, sell, and barter.  Sadly by the time The Christmas Song (AKA "Chestnuts Roasting on an open fire...") was written in 1946 (by: Mel Tormé and Bob Wells and performed by Nat King Cole), the aforementioned Chestnut Blight had already been wreaking havoc on our native populations for over 40 years, nearly wiping out an entire species.

Chestnut Blight (Cryphonectria parasitica) was originally diagnosed in New  York in 1904, accidentally introduced on nursery stock from Asia.  It spread rapidly by wind, rain, and animal.  The fungus causes sunken or swollen wounds, or cankers in the wood cutting off the flow of nutrients and killing the tree.  With no natural resistance, American Chestnuts would die within 2 years of infection and no cure has ever been found. Some American Chestnuts regrow shoots from roots and stumps left in forests, but eventually succumb to the disease again, relegating them to smaller understory shrubs instead of the lofty kings they once were.

There is hope!  The American Chestnut Foundation continues the fight to not only preserve the American Chestnut but to restore their place in the ecosystem.  Hybrids have been developed, and efforts continue to breed and hybridize American Chestnut with more resistant species to preserve as much genetic identity of C.dentata as possible, so these mighty trees do not completely become the ghosts of chestnuts past.