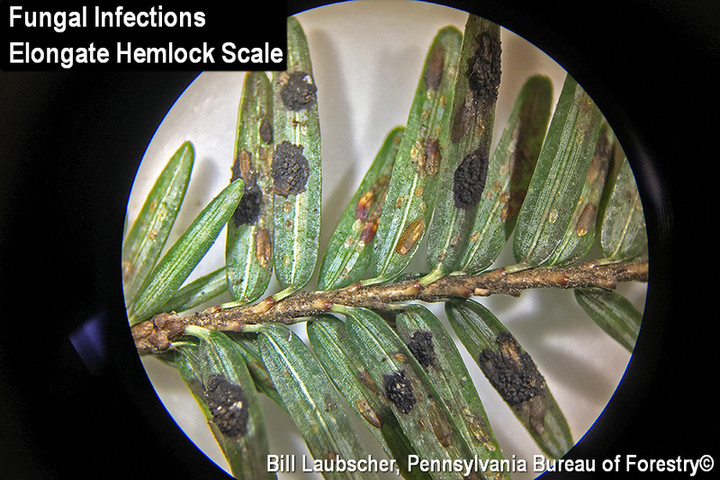 I received an e-mail message this past Wednesday from Tom Macy (Forest Health Program Administrator, Ohio Department of Natural Resources) concerning efforts to discover locations of the non-native elongate hemlock scale (Fiorinia externa) in Ohio and other states.  His message included two attached images taken by Bill Laubscher (Pennsylvania Bureau of Forestry) on November 20 that showed both the scale as well as odd looking blackened accretions on hemlock needles.

The file names for the images were Colletotrichum 1 and Colletotrichum 2.  I recognized the names as the genus of fungi that are associated with several plant diseases.  Indeed, if you Google Colletotrichum, you will find a number of plant-nasties including C. acutatum which is responsible for various anthracnose plant diseases.  At first, I thought Tom was reporting a fungal plant pathogen vectored by the scale.

However, Tom was sharing monitoring work in Pennsylvania by Bill Laubscher and Tim Tomon who also works for the Pennsylvania Bureau of Forestry.  The blackened accretions in Bill's images showed fungal activity.  The fungus, C. fioriniae (formerly C. acutatum var. fioriniae), had sprung forth from the bodies of elongate hemlock scale.  The fungus had killed the scale making it an entomopathogenic fungus. 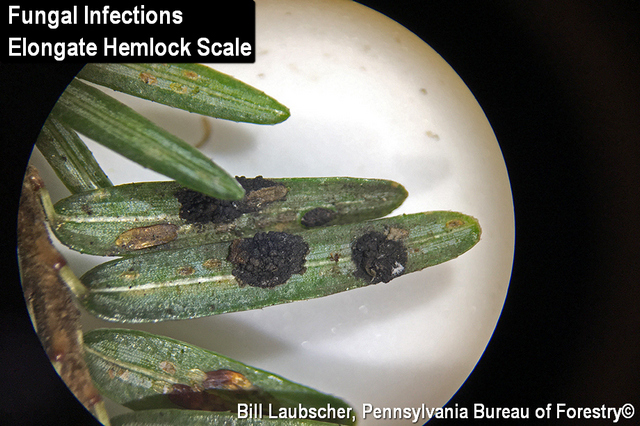 Of course, mycopathogens that kill insects is nothing new.  Notable entomopathogenic fungi include Entomophaga maimaiga which can dramatically decimate gypsy moth (Lymantria dispar) populations.  Such spectacular declines are known as epizootic events which are analogous to epidemics in human populations.

What's fascinating to me is C. fioriniae is genetically closely related to fungi that are almost exclusively plant pathogens.  We often stress that plant pathogens don't infect animals which remains true.  I've never known of anyone losing fingers to the fire blight bacterium or being pockmarked by anthracnose fungi.  However, I've never seen such a close genetic and thus taxonomic relationship between plant and animal pathogens.

On the other hand, C. fioriniae doesn’t behave like many other animal pathogens by simply jumping from one animal host to another.  Apparently, it hides out within hemlock needles as an endophytic fungus. The prefix "endo" means internal, or within, and the suffix "phytic" means plant.  This fungus has an intimate relationship with hemlocks and remains poised within the plant to spring forth and infect elongate hemlock scale.  It represents a case of mutualism with the fungus acting as natural protection against the scale.

It's easy to imagine how this fungus may have evolved to infect a sedentary sucking insect.  The scale is a stationary target.  Once it settles and inserts its piercing-sucking mouthparts into the needles, it's a sitting duck for fungal infection.  Perhaps the fungus is even sucked-up by the scale. 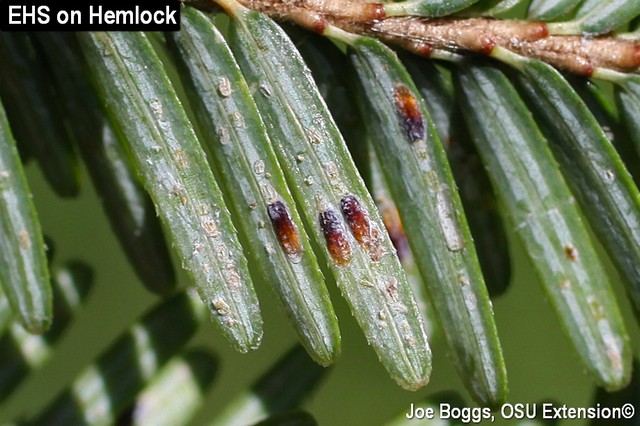 The potential significance of C. fioriniae as a biocontrol agent first came to light in 2002 with a widespread elongate hemlock scale epizootic event across several states including Pennsylvania, New York, New Jersey, and Connecticut.  Subsequent bioassay research published in 2009 showed this fungus is capable of producing mortality rates greater than 90% (See "2009 Journal of Insect Science" under More Information below). 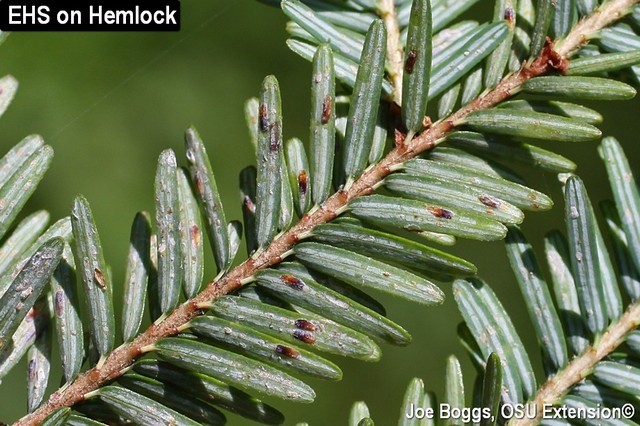 Thus far, we are uncertain of the exact geographical range of the non-native elongate hemlock scale in North America.  Also, we would be very interested to learn the extent of the fungal infections.

We need your help.  Take a close look at the images included in this report including those taken by Bill Laubscher in Pennsylvania on November 20.  Beyond its namesake host, elongate hemlock scale may also infest true firs, Douglas-fir, spruces, cedars, and occasionally pines and yews.  As with many armored scales on conifers, greater concentrations of scale bodies tend to be found on the older, inner needles. 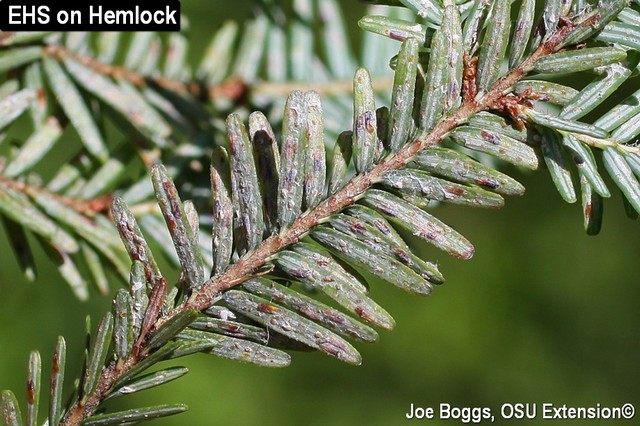 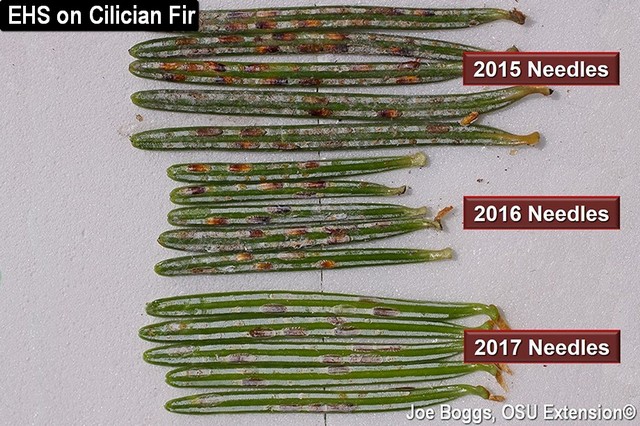 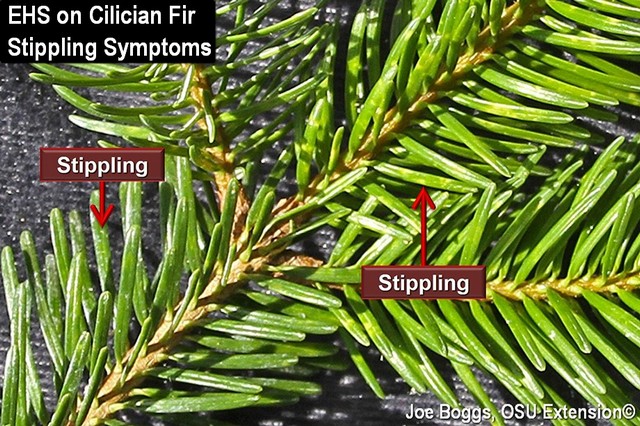 If you find the scale, please report the exact location as well as the host.  Also, please note whether or not you see the blackened growth arising from the scale which indicates a fungal infection.  This is an "armored" scale meaning that it does not exude honeydew that becomes colonized by black sooty molds.

You can send your reports to me (just click on my name above to get my e-mail address) or to Tom Macy at:   Thomas.Macy@dnr.state.oh.us