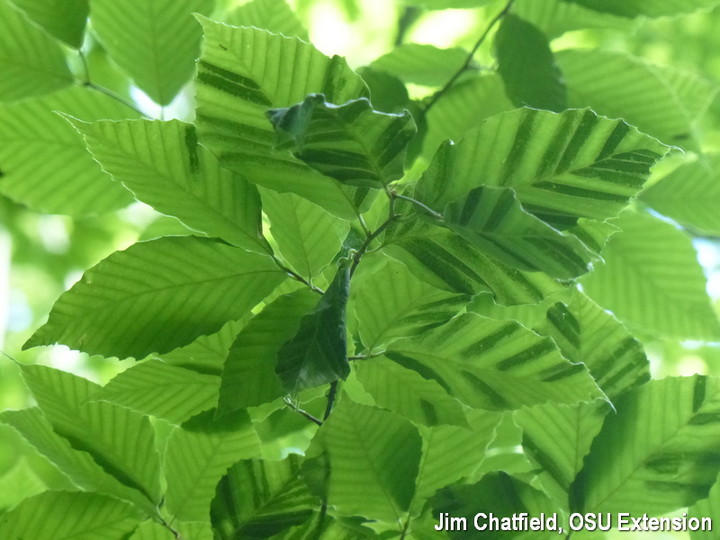 Our knowledge of Beech Leaf Disease (BLD), an emergent problem on American beech (Fagus grandifolia) in northeast Ohio and nearby areas is still in the early stages. For example, we do not know what causes BLD.  The most promising development in learning causation is that we now have scientists with some grant funding on the case. Carrie Ewing in Enrico Bonello’s lab at Ohio State University is doing her PhD work on BLD.

We also have excellent monitoring and mapping of the disease, including Lake Metro Parks and BLD discoverer John Pojacnik and Cleveland Metro Parks, as well as the Ohio Department of Natural Resources Division of Forestry and Holden Arboretum.  But we do not know what causes BLD, if it is a pathogen whether it has a vector, the long-term threat to forest and landscape beeches, and on and on.

We do have some diagnostic aids: what BLD looks like as well as other problems that are often misdiagnosed as BLD. So here is the first in a series of BYGL BLD Diagnostic comparisons. We have discussed BLD in a number of previous BYGL-alerts (https://bygl.osu.edu/node/885), but here is a one on one comparison of look-alikes and diagnostic beech mis-reads.

BLD vs. A Leaf Curling Aphid.

I find this to be the most common BLD mis-read. I wish I could tell you the species of the aphid in this example: I cannot, but it is common in most beech woodlands on a few or many trees. At least I think it is the same aphid; it may very well be that there are a number of aphids that cause this leaf curling on beech. As you can see from the picture, the symptom on beech is the curling of leaf margins, with the sign of the aphid typically being cast skins of the aphids within the curled leaf. Presence of these aphids is not correlated with BLD.

As you can also see, there is a leaf discoloration symptom associated with the leaf curling. This is the key to it being mistaken for Beech Leaf Disease. The yellowing near the infestation is mis-interpreted as the “banding” symptom on BLD. With BLD though, there is clear banding of deep green and lighter greens, not this yellow banding noted from the leaf curling aphid.

Compare this to the banding indicative of Beech Leaf Disease.

This leaf curling aphid causes truly minimal damage to the plant. BLD, on the other hand is a serious problem, causing considerable progressive thinning of the canopy and in some cases tree death. So, check it out when you see beeches in the woods BTW, our landscape European (F. sylvatica) and Asian beeches (F. orientalis and others) have been diagnosed with BLD in nurseries.

Next time, let us remind ourselves of two other aphids that occur on beech: boogie-woogie aphids on American beech and woolly beech aphids on European beech. Also, neither of which is BLD.