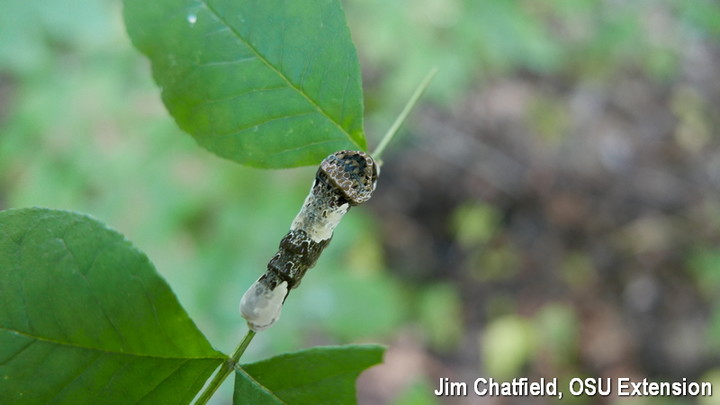 Prickly-ash or pricklyash (Zanthoxylum americanum), is correctly written as a compound word to indicate that this thicket-forming native large shrub or small tree (up to 15-25 tall) is not a “true” ash in the genus Fraxinus) such as green ash (Fraxinus pennsylvanica) or white ash (Fraxinus americana). I relearned this tree when Dan Herms, Vice-President of Research at the Davey Tree Expert Co. (formerly OSU entomologist) pointed out a small specimen of prickly-ash outside his cabin near Sanford, Michigan.

What a story he had to tell. First, he pointed to an angular blob on a leaf of the plant. It looked a bit like an extruded bird-dropping. It was, however, a caterpillar, in fact, the larvae of the giant swallowtail butterfly, the largest butterfly in Ohio, according to the most excellent “Butterflies and Skippers of Ohio”, from the Ohio Department of Natural Resources Division of Wildlife.

These larvae (unlike the adult butterfly) will feed only on plants in the rue family, the Rutaceae, which include various Citrus species.  The only two woody plants native to the northeast in this family are prickly-ash and wafer-ash (Ptelea). So, here it was on Dan’s prickly-ash, munching away. Ironically, emerald ash borer, the emerald menace beetle we now know so well, plays a role here. Emerald ash borer larvae feed on and kill billions of woodland and landscape true ashes (Fraxinus spp.) in Michigan and Ohio and increasingly throughout North America.

This results in openings of woodland canopies. Openings due to the death of true ashes. Openings where prickly-ash receive more sunlight. Therein lies a curious fact. Prickly-ash and other members of the Rutaceae, including citrus, produce furocoumarins, chemical compounds that are deemed phytophototoxicants; plants that are toxic to humans and other animals when activated by sunlight. Toxic to humans in that they result in dermatitis, irritating rashes. Thus, bartender’s disease, Club Med disease, lime (not lyme) disease.

Toxic to giant swallowtail butterflies in that as the prickly-ashes are exposed to more sunlight they produce more furocoumarins and more toxic furocoumarins that result in slower growth of the caterpillars. Slower means more developmental time to be snarfed up by predators and more time for parasites to work their dark magic that keeps the caterpillars from growing up to be giant swallowtail butterflies.

So, emerald ash borer kills true ash trees, in turn opening up prickly-ash plants to more sun, resulting in greater toxicity to giant swallowtail caterpillars. And rashes to Kevin Rice, Dan’s graduate student (now Dr. Rice) studying this phenomenon in the Michigan woods. Not to mention that prickly-ash owes its common name to its thorns that add to their irritation. What a world and oh what a tangled web Nature weaves.  One thread changes another and another and the wonders never cease. “In Nature’s infinite book of secrecy a little we can read.”  Yet we should ever read and read and read.