Some Gypsy Moth Caterpillars Have Met Their Match 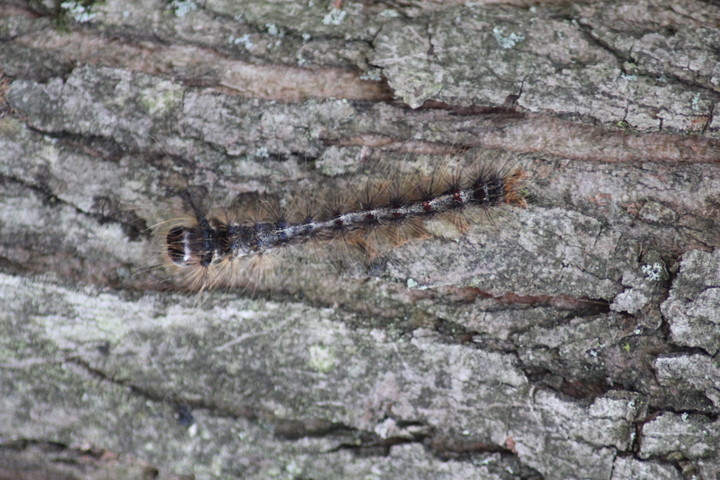 While there has been an increase of gypsy moth (Lymantria dispar) sightings in northwest Ohio, specifically in Lucas and Fulton Counties, late last week some of the leaf eating caterpillars appeared to be dying. Upon closer inspection, it appears that entomophaga (Entomophaga maimaiga), or the gypsy moth fungus, is doing the trick.

Gypsy moth caterpillars killed by the fungus entomophaga typically die hanging vertically from the tree trunks with their prolegs stretched out laterally. Caterpillar appear to shrink in girth and become somewhat rigid. I have described them as toothpick-like in appearance with little legs (prolegs really) that stick straight out.

Usually the fungus kills the larger and later instar caterpillars. Because of the timing, caterpillars can feed extensively early in their lives and still cause substantial feeding injury or total defoliation before they die. The photo below was taken in June after the gypsy moth caterpillars had a feast and moved on to find additional leaves to devour.

If populations of the gypsy moth are wide-spread and numbers are high, the Ohio Department of Agriculture (ODA) in cooperation with the US Forest Service, does accept applications for the Gypsy Moth Suppression Program. Applications for the 2019 season are due September 1, 2018. There are requirements to qualify for treatment including a minimum number of acres, an average number of egg masses per acre and a percentage of canopy cover in the identified area or block. The program does have a 50/50 cost share that would have to be covered at the local level by the person or persons making the application. Additional information about the gypsy moth and the application can be found on the ODA website.