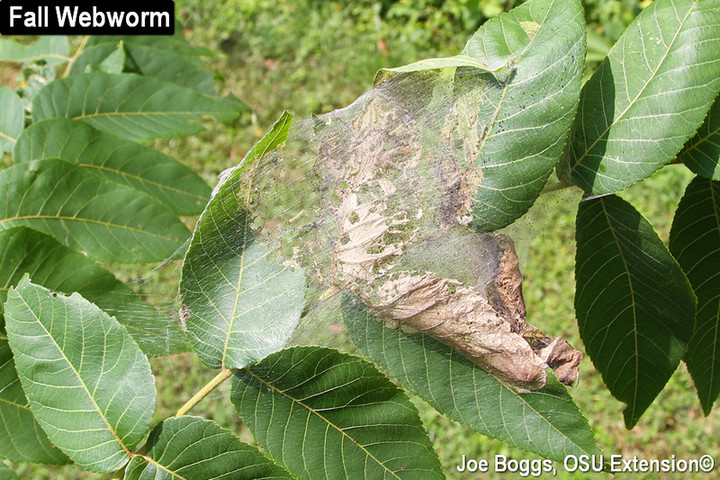 First generation nests of the deceptively named Fall Webworms (Hyphantria cunea) are now becoming evident in Ohio.  One of the most common question that I get about these moth caterpillars is, "why are they called "fall webworms" when it's not fall?"

It's a fair question because astronomically speaking, it's still spring; summer won't arrive in Ohio until the summer solstice on June 22.  Meteorologically speaking, it's summer (June, July, and August).  So, why are we seeing fall webworms now?  Are they arriving early this year because of … global worming??

It's a Generational Thing

Fall webworm moths have at least two generations per season in Ohio.  Entomologically speaking, generations are bookended by eggs and adults.  The moths spend the winter as eggs that hatch in the spring; both astronomical and meteorological.  This marks the beginning of the first generation. 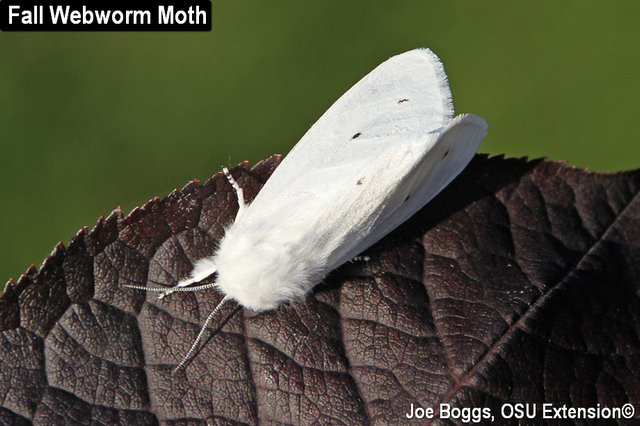 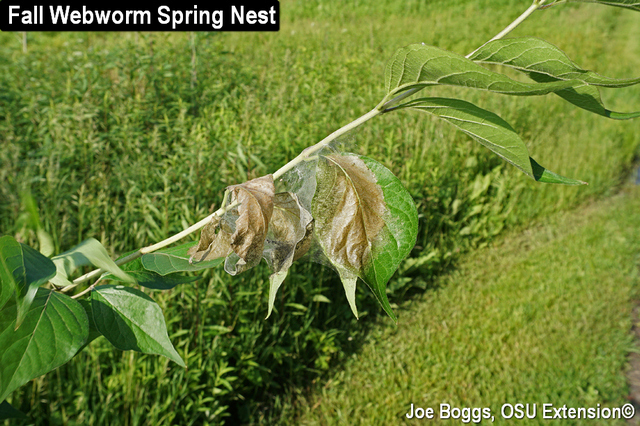 Fall webworm caterpillars feed on the leaves enveloped by their silk nest.  Early instar caterpillars feed primarily as leaf skeletonizers with later instars consuming all leaf tissue except for the petioles and large veins.  As caterpillars grow in size, they expand their nest by casting silk over an increasing number of leaves to accommodate their expanding appetites. 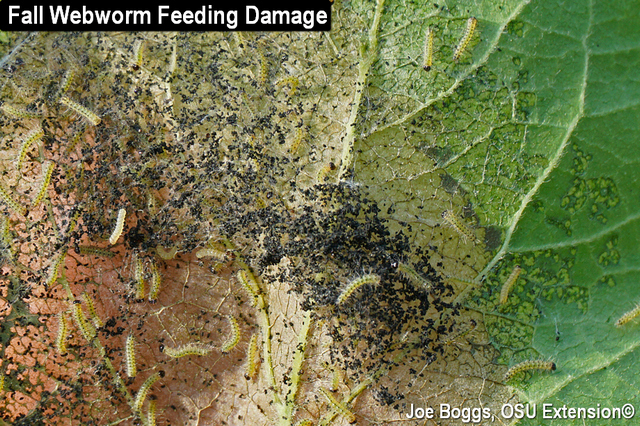 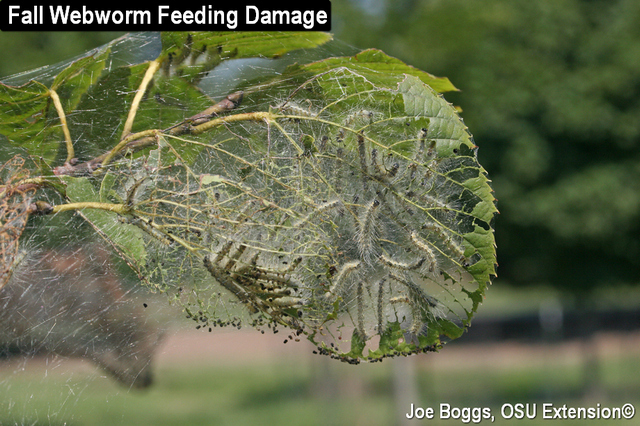 However, nest size ultimately depends on the webworm biotype.  Fall webworms have two distinct biotypes named for the color of their head capsules:  black-headed and red-headed.  Caterpillars of both types are very hairy, but differ in body coloration, nesting behavior, dates for spring adult emergence, and to some extent, host preferences. 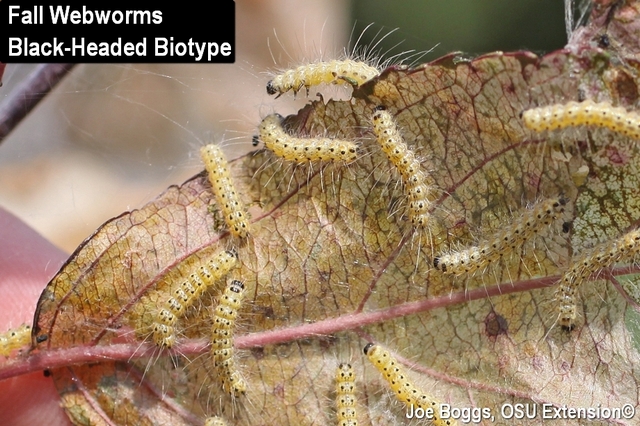 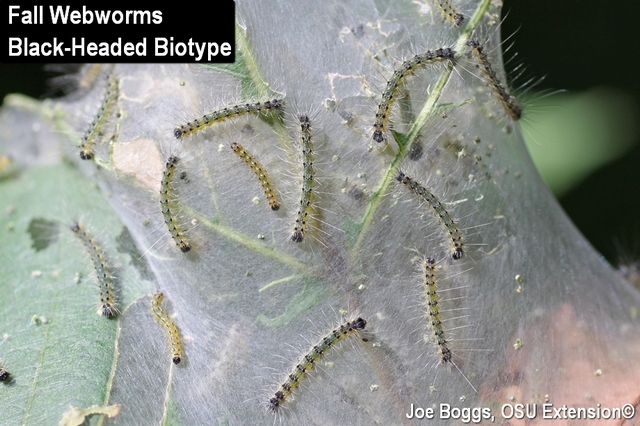 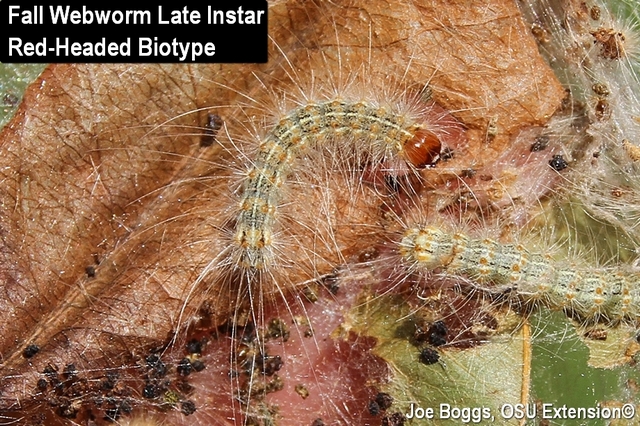 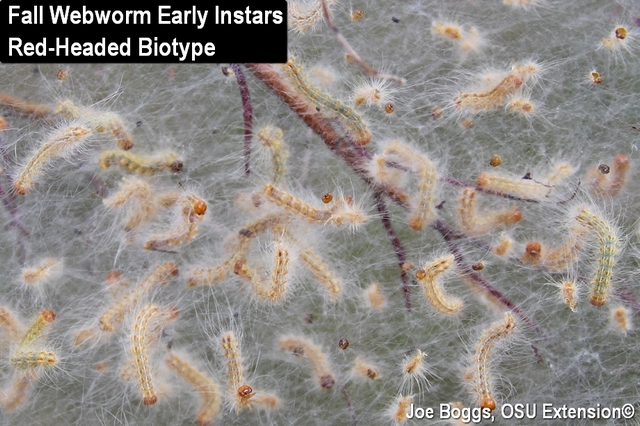 Both biotypes produce communal nests occupied by caterpillars from multiple nearby egg masses.  However, black-headed fall webworm nests appear to include caterpillars from only a few egg masses.  They tend to produce small, wispy nests that envelop only a dozen or so leaves.  However, it is not uncommon for several of these small communal nests to be found on the same branch. 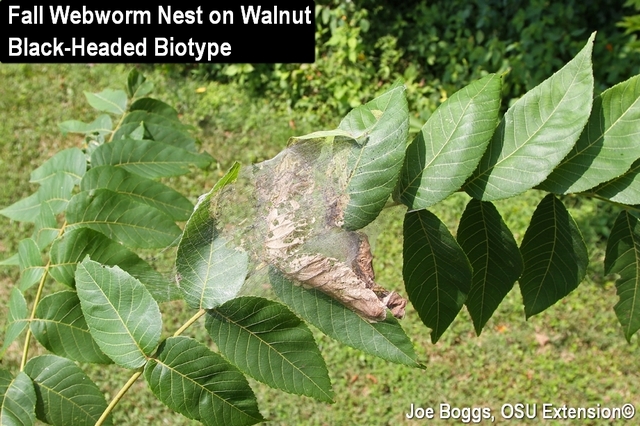 Red-headed fall caterpillars are far more cooperative; their communal nests may include caterpillars from a large number of egg masses.  Thus, they can produce some truly spectacular multilayered nests enveloping the leaves on entire branches.  This biotype is the more damaging of the two and is commonly found in the eastern part of Ohio.  The black-headed biotype is common in the central and western parts of the state.  However, in 2016, I found red-headed biotypes in a county park in southwest Ohio. 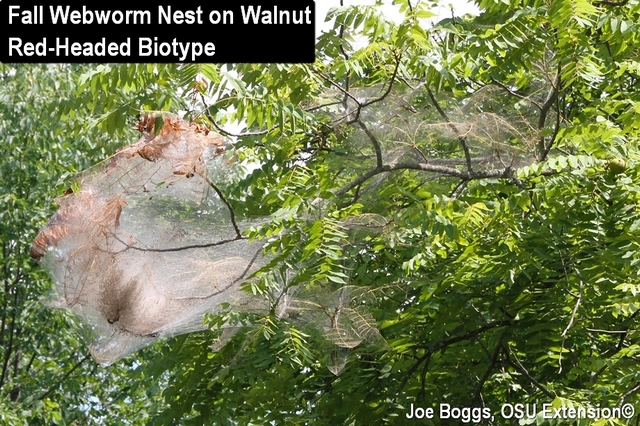 The caterpillars of both bio-types may be found on a wide variety of woody ornamental as well as fruit trees.  Some online references list over 90 tree species as fall webworm hosts.  The webworms typically cause little harm to the overall health of established healthy trees.  However, newly planted trees may be at risk and heavy defoliation can affect fruit sizing on fruit trees. 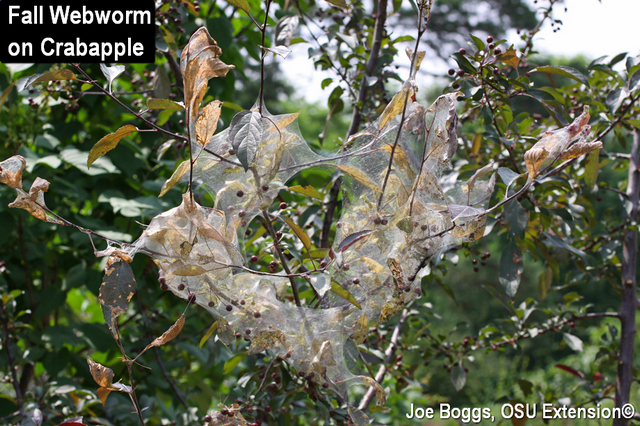 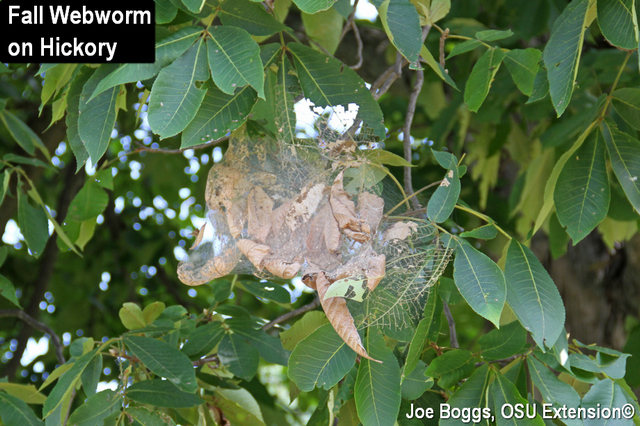 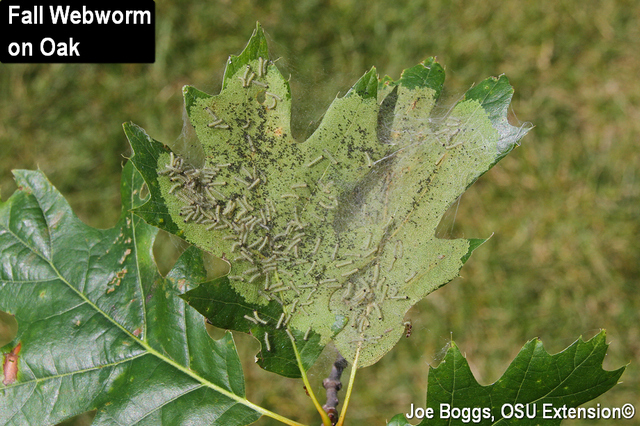 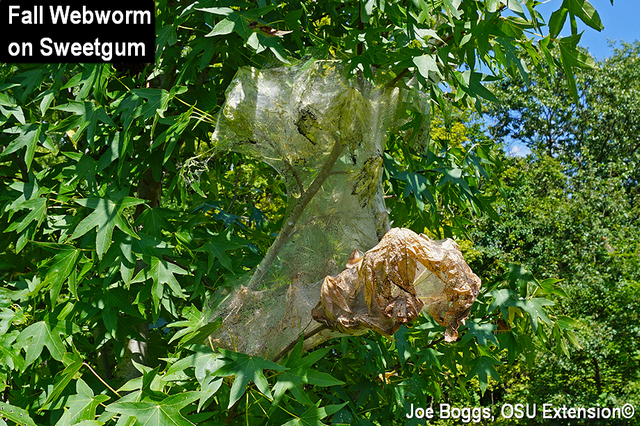 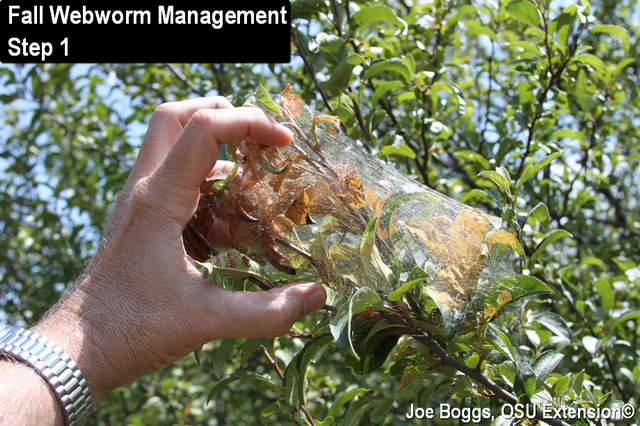 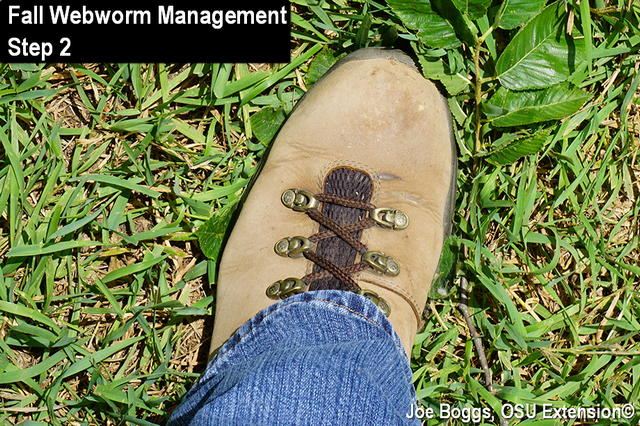 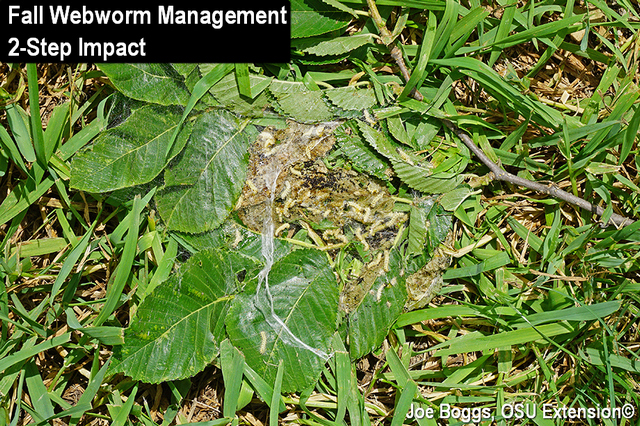 Insecticide applications should be used sparingly to avoid killing bio‑allies that help keep population densities in check.  Fall webworms are native to North America and there are over 50 species of parasitoids and at least 36 species of predators known to make a living on fall webworms.  Indeed, it is not unusual to find fall webworm nests surrounded by a compliment of hungry predators including predacious stink bugs.  These and other beneficial insects are very effective in reducing year‑to‑year populations of this defoliator. 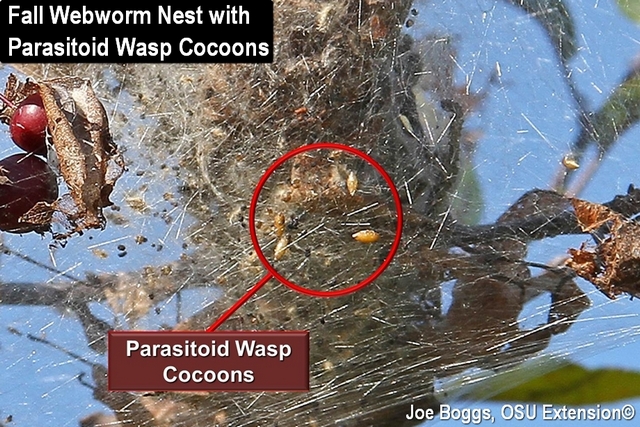