Last week, a local police officer was called out to a property for mysterious “bug” activity.  An unusual nest was reported on the property and the concerned homeowners did not know what it was or what to do with it.  Luckily, the officer knew to call their local Extension office and soon we were ON THE CASE!  (Here come the sleuthing puns!) 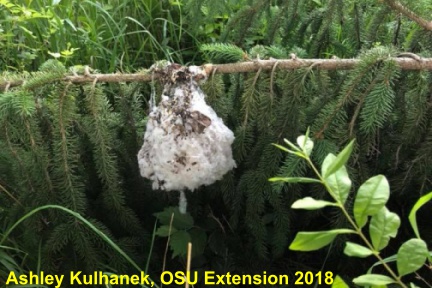 The suspect was described as a fluffy basketball.  However, once on site, it was found to be much smaller.  Extension educators had suspicions for what it could be, but investigation was in order.  AFTER ascertaining the suspect was not armed, i.e. did not containing any stinging insects of concern, and really did not appear to be anything insect-made, I entered the crime scene. 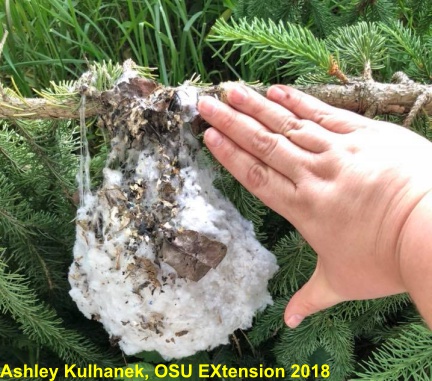 (Have you guessed yet?)  It was adjacent to a corn / soy field, hanging from a Norway spruce branch about 6 inches from the ground.  It dislodged from the branch fairly easily and was constructed of loose cottony fibers of possible cushion fiber-fill and cottonwood seed. 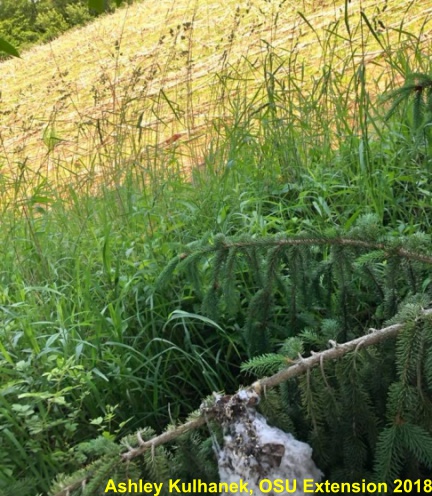 Inside was dark brown and gray fur, mouse droppings, and remains.  Much to the relief of the homeowner, it was identified as a mouse nest and not that of stinging insects as they had suspected. 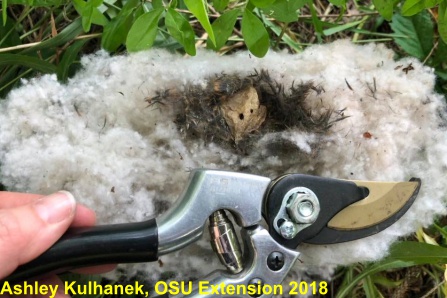 This case was somewhat unexpected as mice nests are not typically so obvious in the landscape.  Ohio has 5 species of mice and while many of them build spherical nests like the one found today, such nests are usually better concealed, such as in a tree cavity, under a log, hidden in a clump of grass, or beneath dense shrub cover. Tree nests or branch nests do happen, especially in woody and shrubby areas where foliage provides camouflage and cover.  Winter may expose these nests after foliage drops.

Nests may be built from just about any soft material that is available, including shredded bark, milkweed silk, grass, fur, or even feathers. After materials are gathered and piled together, the mouse pushes its way inside creating a single entrance, and then twists and turns a bit to create a cozy cavity.

While mice are generally regarded as pests by most homeowners, there are efforts to conserve their natural habitat in some instances.  As an example (and for your daily dose of cuteness), check out the Eurasian harvest mouse and it’s use of used Wimbledon tennis balls for nests! http://www.bluedotmagazine.com/2016/04/04/used-wimbledon-tennis-balls-become-tiny-homes-for-mice/