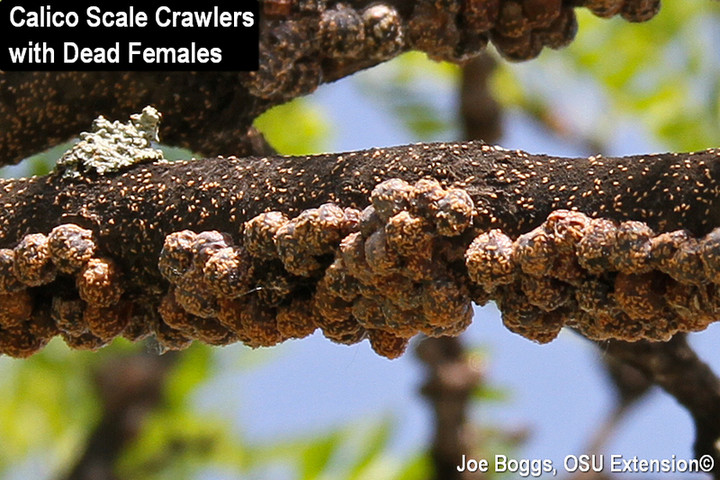 Calico scale (Eulecanium cerasorum) eggs located beneath helmet-shaped females are hatching in southwest Ohio and the resulting 1st instar nymphs (crawlers) are on the move. Unlike armored scales, all nymphal stages of this soft scale are mobile, so nymphs can be called "crawlers" throughout their development 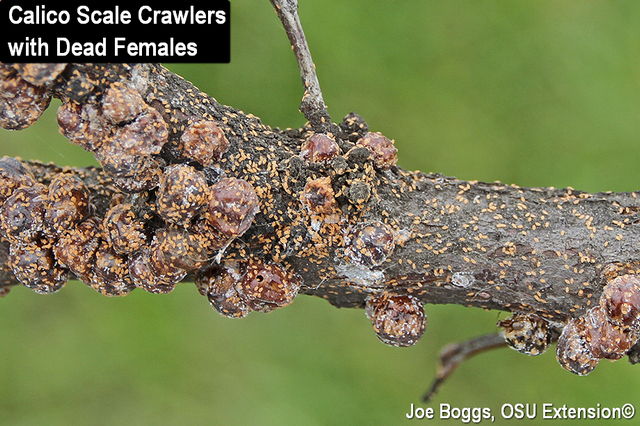 Calico scale females can produce more than 1,000 eggs meaning that populations can build rapidly.  The tiny, tannish-brown, oblong-shaped 1st instar crawlers measure around 1/16" in length.  They are easily visible with the unaided eye particularly against bark darkened by black sooty mold. 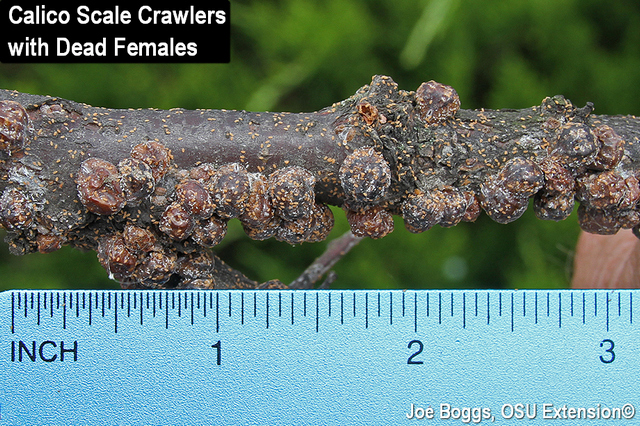 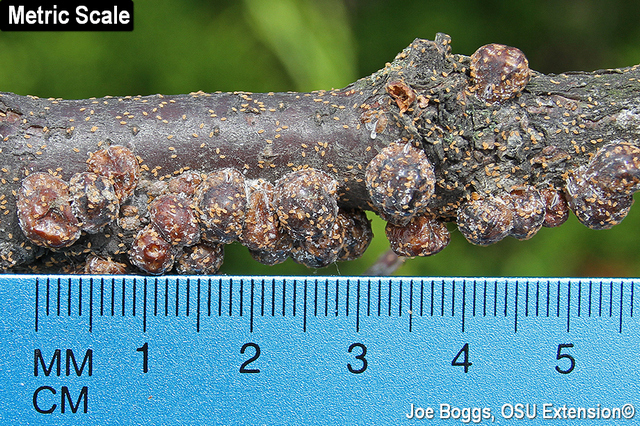 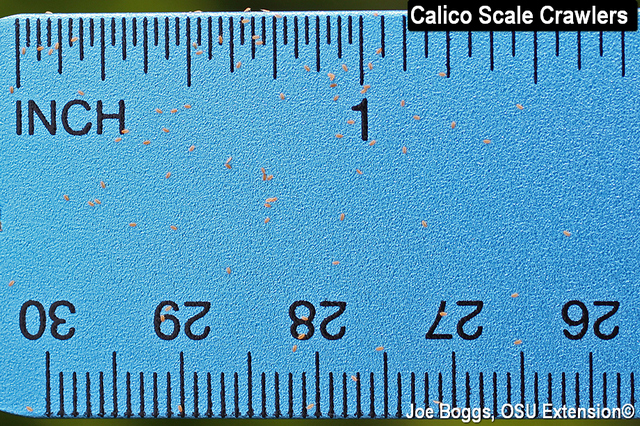 The crawlers migrate to the undersides of leaves.  They position themselves along leaf veins where they insert their piercing-sucking mouthparts into phloem vessels to extract amino acids dissolved in the sugary plant sap. 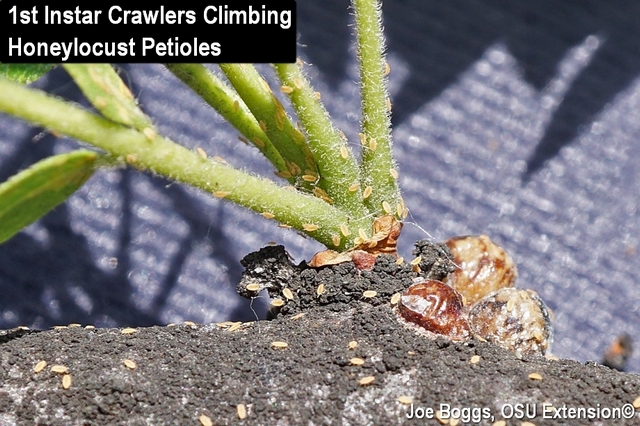 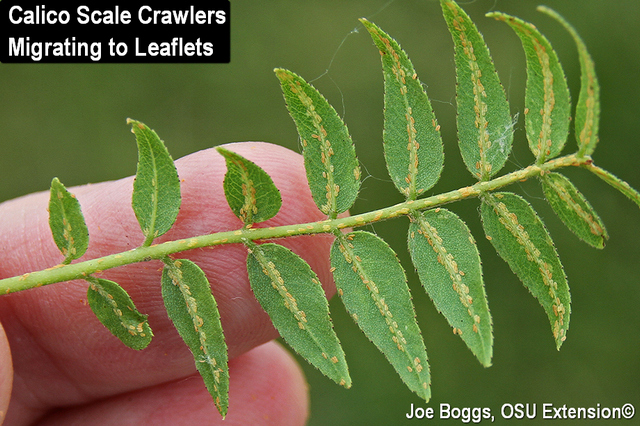 Like the maturing females earlier this season, the crawlers discharge excess sap from their anus in the form of sticky, sugary "honeydew."  Their honeydew production is usually not as dramatic as that which was produced by the maturing female scales.  However, high crawler populations can emit enough honeydew to produce a sticky sheen on the leaves, stems, and branches of scale infested trees as well as understory plants.  The resulting colonization of the honeydew by black sooty molds further adds to an unsightly appearance. 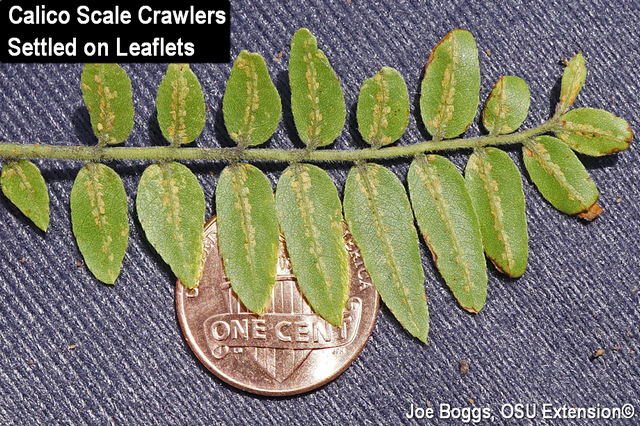 The common name for this "soft" scale is derived from the appearance of the mature females.  Like all soft scale, the females are protected by a soft, helmet-like shell.  Their shells measure around 1/4" in diameter and have a starkly contrasting calico pattern of black-and-white markings. 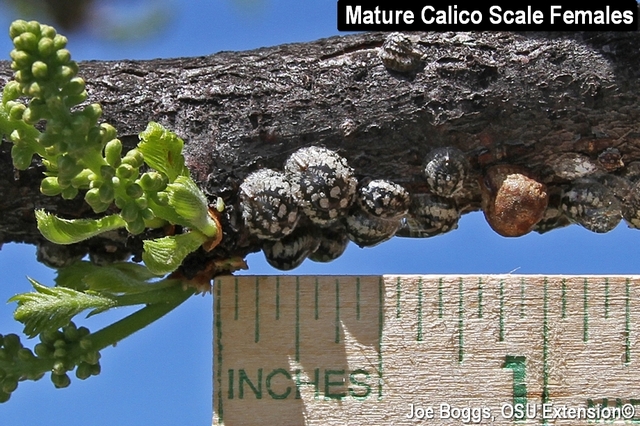 Calico scale females die after producing their eggs.  They quickly turn reddish-brown and appear deflated.  The dead females will remain evident throughout the remainder of the season and may give the false impression that control efforts such as an insecticide application were effective.  In fact, I've have received pictures in the past of calico scale females that died of natural causes being used as proof that an insecticide application was effective. 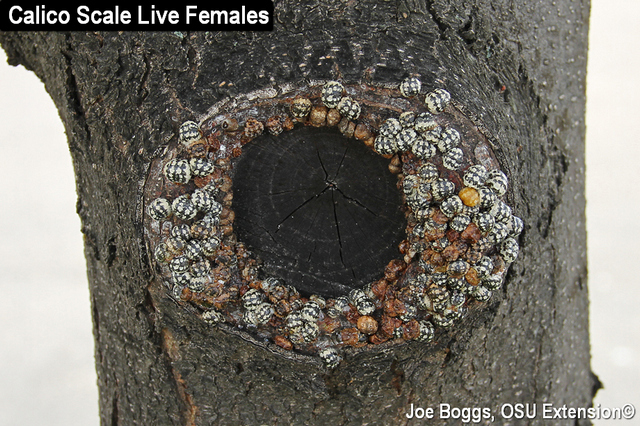 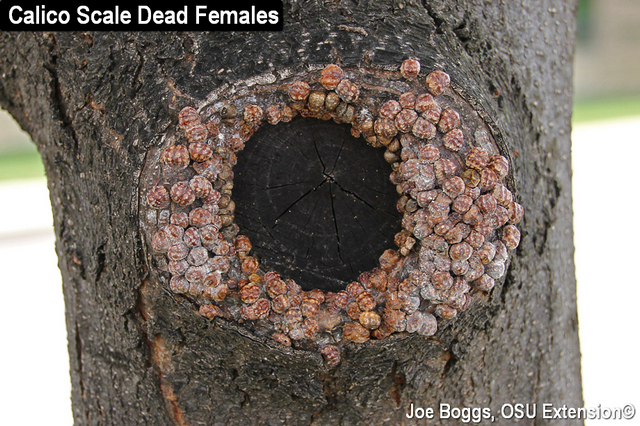 This non-native soft scale can infest a wide variety of deciduous trees including 16 host species in six plant families.  They may be found on buckeye, crabapple, dogwood, elm, hackberry, hawthorn, honeylocust, magnolia, maple (including boxelder), oak, pear, redbud, sweetgum, tulip polar, yellowwood, and zelkova.  However, I've observed that honeylocust appears to be a particular favorite and I use them as "indicator trees" for detecting an infestation in southwest Ohio landscapes.

This is one of the most difficult soft scales to control.  It does not respond to many insecticides that are effective against other soft scales including most neonicotinoid systemics.  Dormant or horticultural (summer) oil as well as insecticidal soaps are also ineffective.

Unfortunately, control results have been highly variable between insecticide efficacy trials conducted over the years.  This means there is no clear insecticide recommendation that does not carry some risk of failure.  However, given the impacts of this non-native scale on tree health as well as collateral annoyances such as honeydew raining down on parked cars, sidewalks, etc.; risky applications may be better than doing nothing at all. 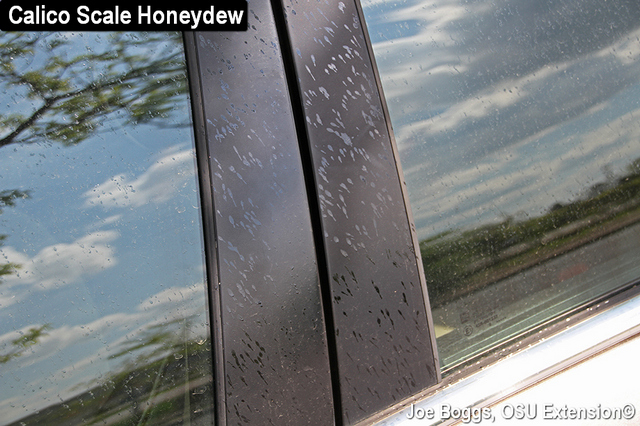 Efficacy trials conducted in 2016 and 2017 as part of the IR-4 Project, Ornamental Horticulture Program, showed that mated, "inflating" females in the spring may be a viable target for certain insecticides.  The systemic neonicotinoid insecticide, dinotefuran (e.g. Safari, Transtect), applied as a soil drench or bark spray provided good control although results varied between trials. The systemic insecticide cyantraniliprole (e.g. Mainspring) which belongs to the bisamide class of insecticides showed slightly better control, but results were also variable.

An OSU trial conducted in 2014 targeting settled crawlers on the underside of honeylocust leaflets in late July revealed that Onyx (bifenthrin) applied as a topical spray provided good control.  Dinotefuran applied as a soil drench failed to provide an adequate reduction in the crawler population.  I've also heard anecdotal reports from a number of arborists that other formulations of bifenthrin fail to achieve adequate suppression of the settled crawlers. 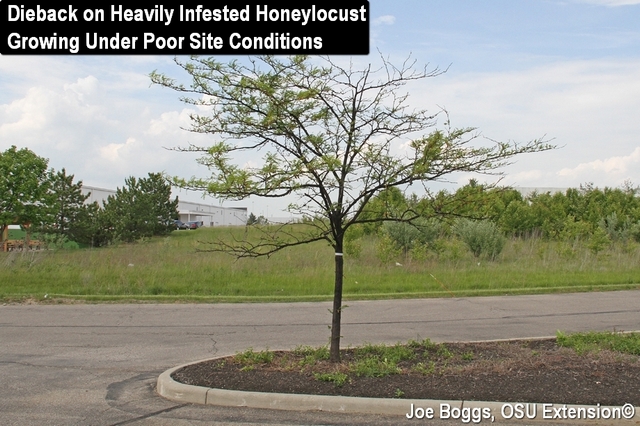 Calico scale is seldom a direct killer of established landscape trees.  However, heavily infested trees can suffer branch dieback and the accumulated stress caused by substantial sap loss may cause infested trees to succumb to other stress related factors.  Consequently, addressing general tree health concerns (e.g. good site selection, proper planting, watering during droughts, etc.) should be the first line of defense against the overall impact of this non-native soft scale.