Authors
Jim Chatfield
Published on
May 24, 2018 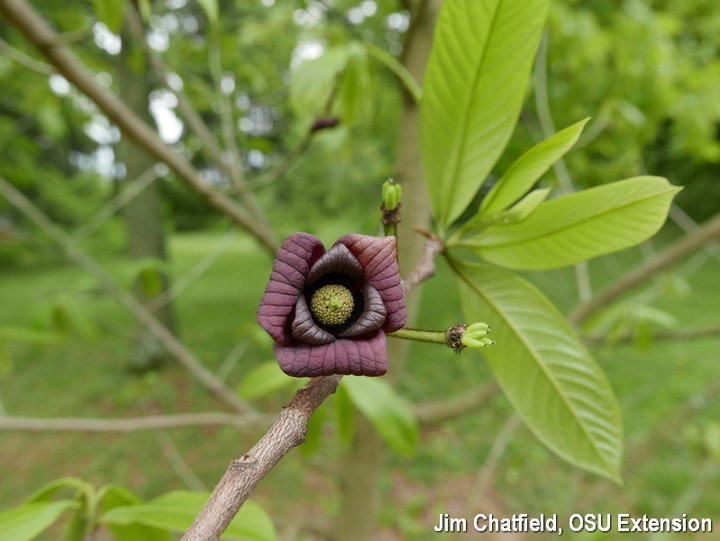 Whaaat. That first picture got your attention, did it not. Pawpaw flowers are not white!  But they are beautiful, and now past. To further digress, Michael Dirr wonderfully terms pawpaw flowers “lurid purple” in color, and purple is a color made up of red and blue, and after all, white light is made up of red, green, and blue, so a perfect lead-in to…

…This past weekend, when I took a walk through my yard, starting with a side area where there is a patch of lily-of-the-valley (Convallaria majalis). I took a sniff of the perfumey flowers (smell but do not eat – all parts are poisonous), then noticed that the patch was not as large as I suspected. In fact, at least half of the patch was wild lily-if-the valley (Maianthemum canadense).

I have seen this in woodlands often, but have ignored it probably for years in my yard, supposing it was Convallaria.  And spreading among these as well was sweet woodruff (Galium odoratum, the May wine herb), intruding on this scene. Three white flowers taking up the ground amidst lilac, striped maple, weeping katsura, kousa dogwood, and other ornamentals.

It got me thinking of what other white flowers were in the yard. And they were legion, including a dwarf Aronia, daisy fleabane volunteers, flowering dogwood, white violets, a spreading white azalea, may-apples, volunteer shrubby honeysuckles, raspberries about to bloom white from their buds, kousa dogwood which bloomed like crazy last year but gets an honorable mention here even though it is taking a year off, a volunteer euonymus, spring beauty wildflowers, and a Korean mountainash Rich Larson of Dawes Arboretum gave me over three decades ago.

And that is just to start. There were highbush blueberries, tiny, creamy bell-like flowers which have great fall color as an ornamental and three of which provide about a gallon of blueberries each year, or rather a half gallon one year and a gallon and a half the next. Fortunately we have good, acid soil.

There was the delightful fragrance and feathery flowers of white fringetree, a tree in the back of our two acres that I ridiculously thought was a small persimmon for a few years after planting.  Emerald ash borer affects this Chionanthus virgincus, a member of the Oleaceae, closely related genetically to its fellow family member, the genus Fraxinus (ashes).  The emerald menace has not affected our fringetree, at least not yet, despite three large mega-infested ashes in our yard we had removed two summers ago.

There are diminutive wild strawberry (Fragaria vesca) plants flowering now. They are more than matched by the beautiful fields of garden strawberries (Fragaria x ananassa) for market just past the western edge of our property, courtesy of the ever-bountiful Rittman Orchard. Come June we shall Go Forth Young Man and Woman, to the U-Pick portion of their business as that most wonderful part of the year begins – the Berry Season.

Back to the woody plants: Bloom on our various crabapples was coming to an end then lo these four day ago, but even the spent blossoms of the Molten Lava crabapple demonstrated the elegance of these lovely flowering trees. Flowering dogwood (Cornus florida) was at the end of its reign in our front yard, but a somewhat wild forgotten area in our northern side-yard yielded a surprise. I had almost forgotten and had to relearn the beauty of the creamy butter yellow buds opening to white four-bracted inflorescences of Cornus alternifolia. Wow.

A lowly “weed” disqualified itself as such, at least for the purpose of this bygl-alert, for I want it for the length of time it takes us to see what this tiny white flower represents. It shows us below its plant family credentials. Common chickweeds (Stellaria media) is in the Caryophyllaceae, which commonly has the characteristic of cleft petals, as seen below, with its five petals superficially looking like ten. Other members of this family include, carnation, gypsophila, and many “pinks”. 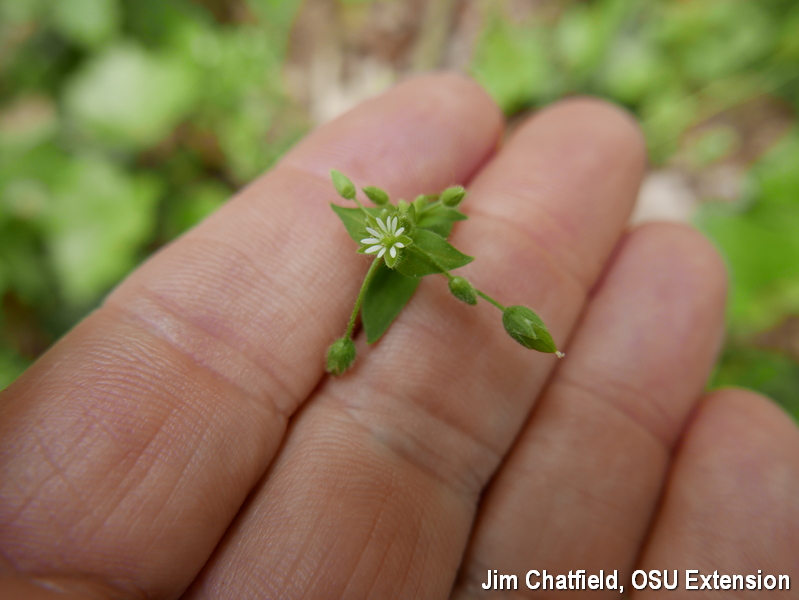 Note: If you want to see a wonderful YouTube of identifying the lawn weeds, common chickweed and mouse-eared chickweed, and the larger woodland wildflower, star chickweed, check out: https://www.youtube.com/watch?v=GJnp-lqdofM

Two of my wife’s favorite woody plants are the double-file viburnum amidst our crabapple grove and the ‘White Tigress’ striped maple overarching our picnic table. The flowers of this infinitely interesting maple (bark, stipules, leaves and leaf venation, form, fall color) are what caught my eye this time. I had not looked carefully at the chain of flowers about to become winged fruits. They have what I predsume to be two prominent exerted styles, the tips of which contain the stigmas receptive to pollen grains and the base being the ovaries which when ovules are fertilized will ripen around the developing seeds and become the fruits. 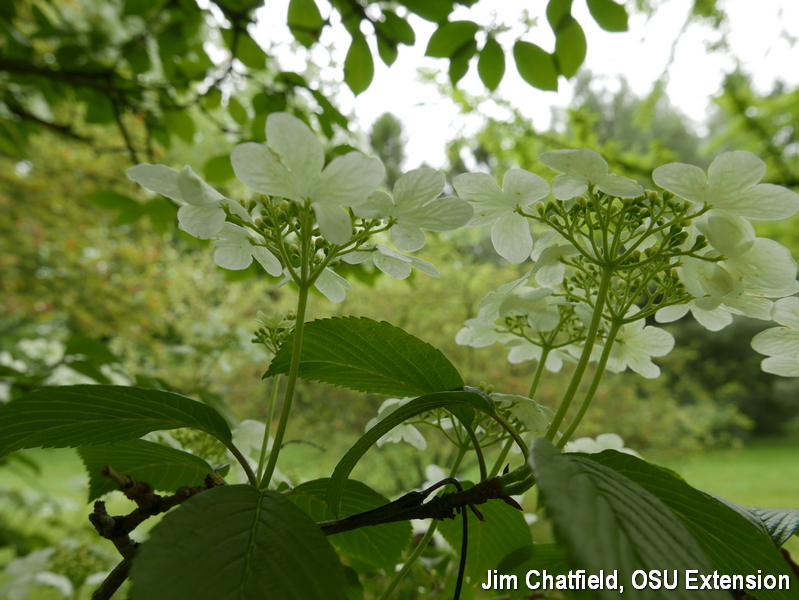 Finally two usual suspects, except from a certain perspective. Dent-de lions, the French name chanelling the toothed leaves or lion’s teeth, or dandelions, are certainly beautiful in their blowball stage, though unpopular in this seed-spreading mode. And tiny, cream-white flowers of Rhamnus, also in that wild northern area of the ChatScape. But wait, it is diseased. Alas, not in a killing way: A rust fungus (you will have to wait to see it) that has infected this invasive woody plant. Whither will this fungus go next?  Stay tuned soon for some springtime rust alerts, as we segue from white to orange.