Authors
Jim Chatfield
Published on
May 14, 2018 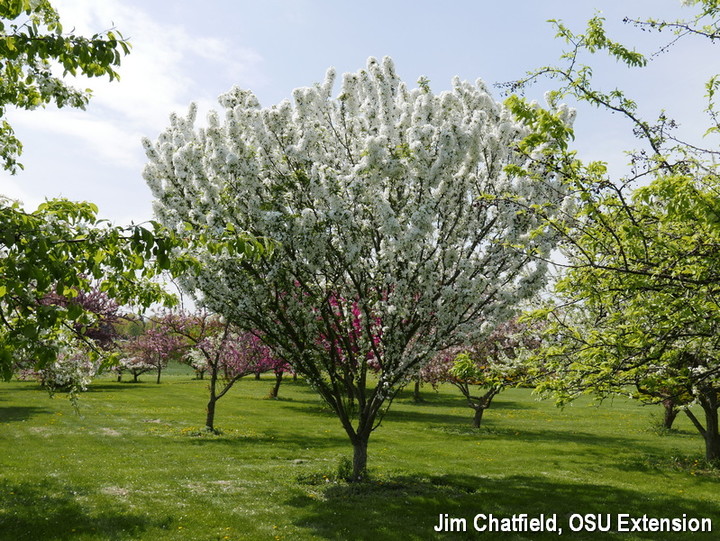 Let us harken  to Shakespeare’s intonation of : “Prithee, take me to the crabs”.

As you can see from the ‘Adirondack’ crabapple above, in northeast Ohio it was a delayed, compressed, yet spectacular season for crabapples, with variations on these themes throughout more southerly areas of Ohio of course. This past week was the peak of the “Now Showing” (a term stolen years ago from Dawes Arboretum’s weekly visitor center feature display) of colors at Secrest’s Crablandia.

Decades ago, this Mother’s Day weekend was the peak for the crabapples at Secrest, but with global warming this is no longer generally the case: by the second weekend of May in recent years, most crabapple blooms were long gone. This year, though, they reached their peak this week. JunJun Fan, a Chinese scientist from the Crabapple Institute (11 faculty and 26 graduate students) at the Nanjing Forestry University arrived here in late April, which I had told her would probably be the crabapple peak.

She patiently waited for the weather to conform to climate, but as on any given spring in any location, predictions may go awry. Finally, this week she was out in full force with her camera, and with her fellow scientist Ding Yunxia from the Shanghai Sports Management University, and their wondrous curiosity. So, we visited Dawes Arboretum near Newark last week with crabapples at peak further south in Ohio and then Secrest bloomed forth this week.

Favorites included ‘Strawberry Parfait’ with its spectacular large flowers of white, bleeding with soft reds, ‘Coralburst’ with its perfect stars of carmine buds opening to pinkish and then white blossoms, and the magnificent ‘Rousseau’ which unfortunately never has become a commercial cultivar.  Additionally, from the ChatScape comes 'Candymint', a Sargent selection made by Tom Simpson at Simpson Nursery near Vincennes Indiana, and the ever-spectacular 'Prairifire' and 'Scarlet Brandywine' from Secrest this weekend.