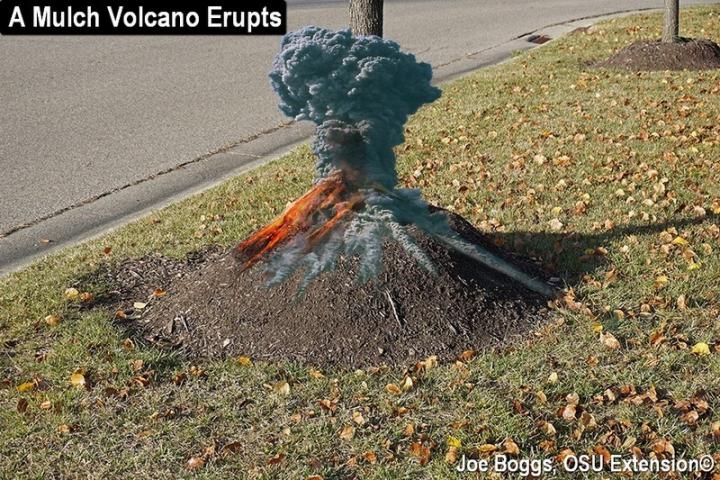 Why in the name of all that is horticulturally holey do we continue to see mulch piled around tree trunks to stratospheric heights?  What is the appeal?  And, why can't we stamp out these mulch monstrosities despite years of educational efforts? 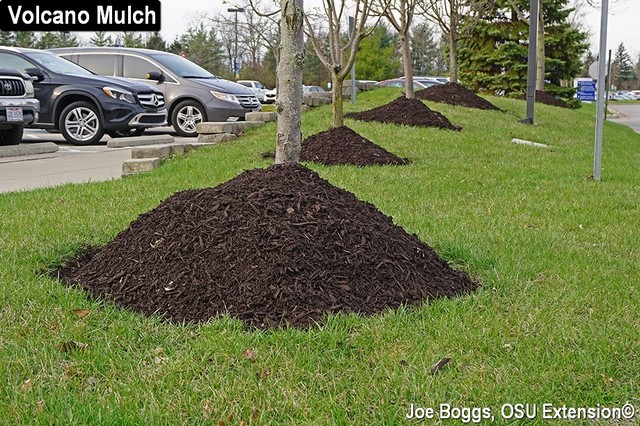 The image below was taken 20 to 25 years ago by Jim Chatfield using a 35mm camera.  It shows Erik Draper's size 12 shoes positioned to illustrate mulch piled over 2 feet high. The three of us used this image for years in numerous training programs to teach against this horticultural horror (volcano mulch, not Erik). 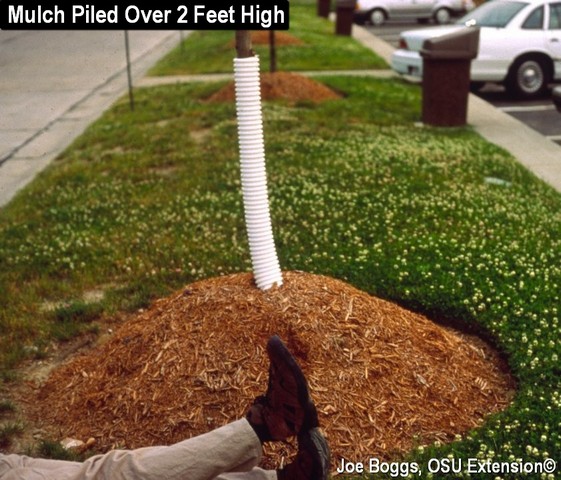 Of course, there have been numerous efforts by other Extensioneers, Master Gardeners, and our Green Industry to educationally eradicate mulch volcanoes (a.k.a. mulch mounds).  There has been some success.  I can count on provoking groans from audiences of horticulture professionals or Master Gardeners by showing them pictures of mulch volcanoes.  The impact is so profound, I commonly hear groans lingering throughout my presentations!

And yet, mulch volcanoes continue to erupt. 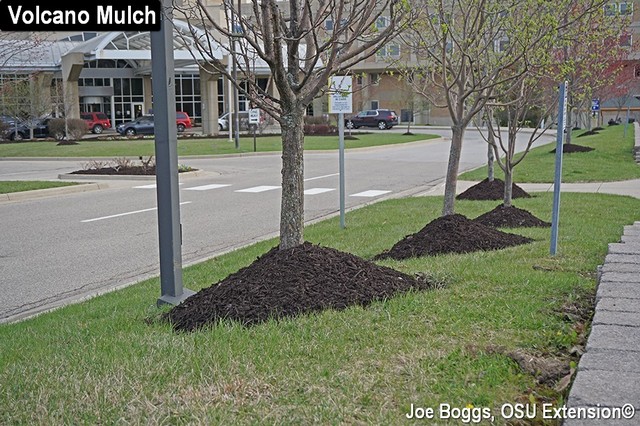 Indeed, this mulch rant was incited by a visit to a local hospital yesterday where my wife had a minor medical procedure.  Nothing serious, but I spent the wait-time cruising the hospital's landscape.  Unfortunately, the most striking feature was new mulch formed into high mounds:  mulch volcanoes were erupting everywhere!

Adding insult to injury was the peculiar practice of digging a "mulch moat" around the base of the mulch stratovolcanoes.  Creating these mulch moats not only cuts existing tree roots extending into the surrounding soil, but the trench can prevent root regrowth into the soil beyond the moat.  In essence, each tree has its entire root system confined to the area beneath its mulch volcano.  ARRGHH!

I'm certain the hospital is staffed by some of the best medical professionals in our region.  However, as visitors and patients approach the hospital, they are greeted by clear evidence of far less than professional horticultural practices. 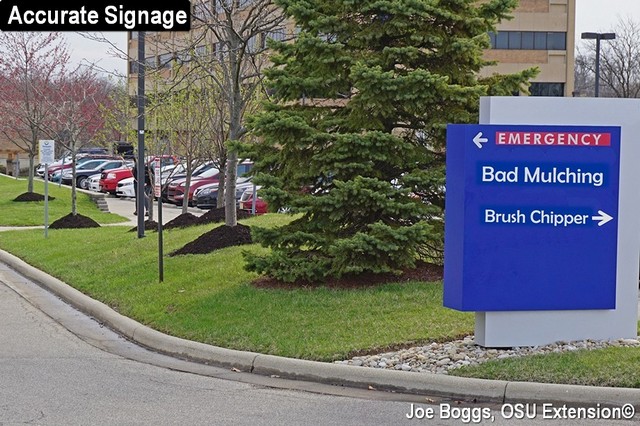 When It's Done Right

Organic mulches such as aged bark mulch are a wonderful thing.  They moderate soil temperatures, preserve soil moisture, suppress weeds, and as the organic mulch slowly decays, it contributes to the organic content of the underlying soil.  The dark color of natural bark mulch also enhances landscape aesthetics.  Of course, the availability of organic mulch dyes makes other colors available; shopping for mulch can be like using an artist's palette.

Last season, I highlighted an exemplary use of mulch in Glenwood Gardens, Great Parks of Hamilton County (see BYGL April 27, 2017, "Glenwood Gardens: A "Volcano" Mulch-Free Zone").  They had followed all of the general recommendations for the proper use of hardwood mulch around trees.  The mulch rings were as large in diameter as practical and mulch depths were no more than 2 - 3 inches.  Mulch that found its way onto the tree trunks was pulled away from the trunk flare. 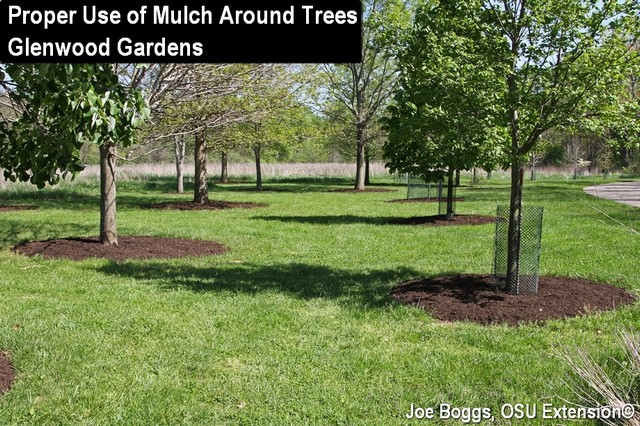 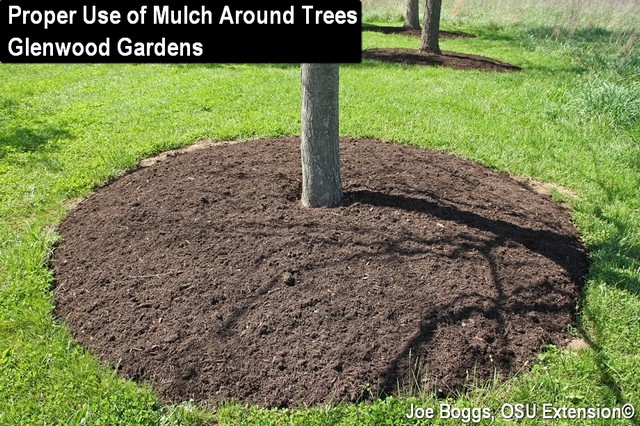 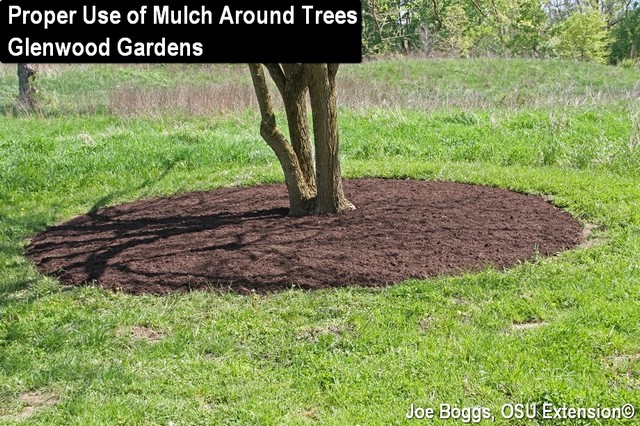 When It's Done Wrong

Volcano mulch does not kill trees outright; if it did, people wouldn't do it.  Instead, it produces subtle, long-term, ill-effects.  Although bark mulch may at first appear light and airy, it will ultimately compact as it degrades to interfere with oxygen reaching tree root cells.  Trees respond by growing roots into the mulch; however, the roots can become exposed as the mulch further degrades. 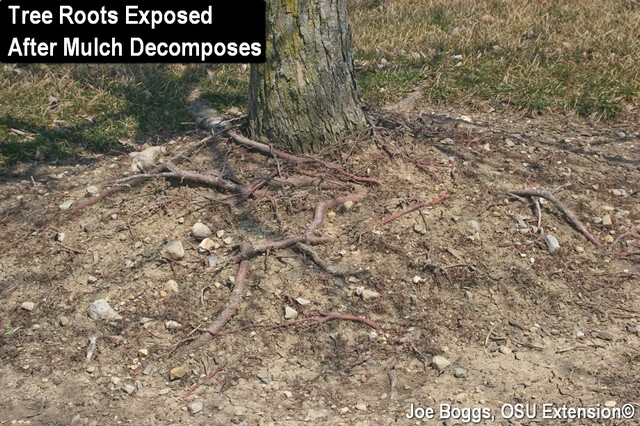 The slopes of mulch volcanoes cause roots to turn; they can't grow into thin air!  Eventually these roots encircle the tree trunk and merge with the stem tissue.  As these errant roots increase girth, they gradually girdle the trunk and restrict vascular flow.  Thus, they are known as "stem girdling roots." 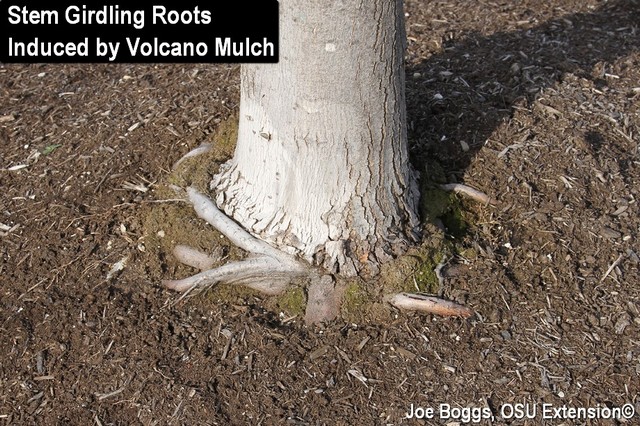 As the mulch decomposes and dries out, it will eventually start to repel water; it becomes hydrophobic.  You can observe the hydrophobicity of dry organic matter when you try to moisten a bag of dry peat moss.  Of course, water repellency ultimately causes roots that have grown into the mulch to dehydrate.

The deleterious nature of volcano mulch is not immediately apparent.  Moisture starvation and vascular strangulation can ultimately kill a tree; however, along the way they produce tree stress.  This can induce trees to drop their defenses against infestations by opportunistic insect pests such as native borers or infections by plant pathogens.  Of course, pests and diseases get blamed if trees succumb, not the volcano mulch that made the trees susceptible in the first place.

Volcano mulch is a little axe. 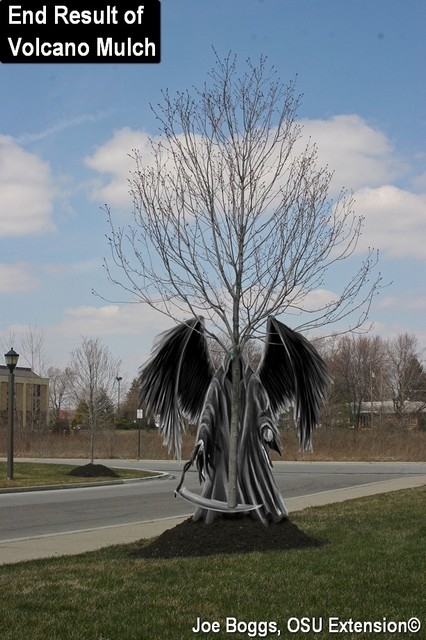