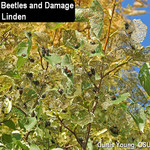 After getting off to a late, slow start this season, Japanese Beetle numbers have risen dramatically with high populations being reported in various parts of the state. However, not everyone is seeing heavy damage. Thus far, the population distribution is remaining highly localized.
Published on
July 10, 2019
Authors
Joe Boggs
Curtis E. Young 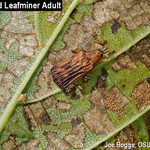 BYGL readers should be familiar with the Basswood Leafminer. We've reported on the skeletonizing and leafmining activities of this native beetle on its namesake host, American basswood for years. High populations cause entire basswood trees to become reddish-brown. Travelers on the northern portion of I-75 in Ohio will soon be treated to "flaming" basswoods gracing the woodlots along the route.
Published on
August 7, 2018
Authors
Joe Boggs
Basswood Leafminer Found in Southwest Ohio 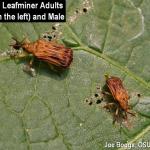