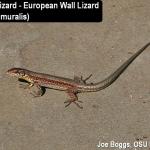 I’ve posted several BYGL Alerts over the years about the so-called Lazarus Lizards (Podarcis muralis, family Lacertidae). However, I’m resurrecting these fascinating reptiles based on spotting a few skittering around on a rock retaining wall near my home in Butler County, just north of Cincinnati.
Published on
September 22, 2021
Authors
Joe Boggs

The Rise of Lazarus Lizards 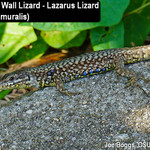 So-called Lazarus Lizards were a topic in both a diagnostic walk-about and a meeting I was involved with last week. The lizard's common name is influenced by where you stand, literally. If you're an American herpetologist, you would call them European Wall Lizards. If you live in Europe, they are Common Wall Lizards. If you're a native Cincinnatian, you would likely call them Lazarus Lizards.
Published on
September 22, 2019
Authors
Joe Boggs
Subscribe to Common Wall Lizard
Ohio State University Extension