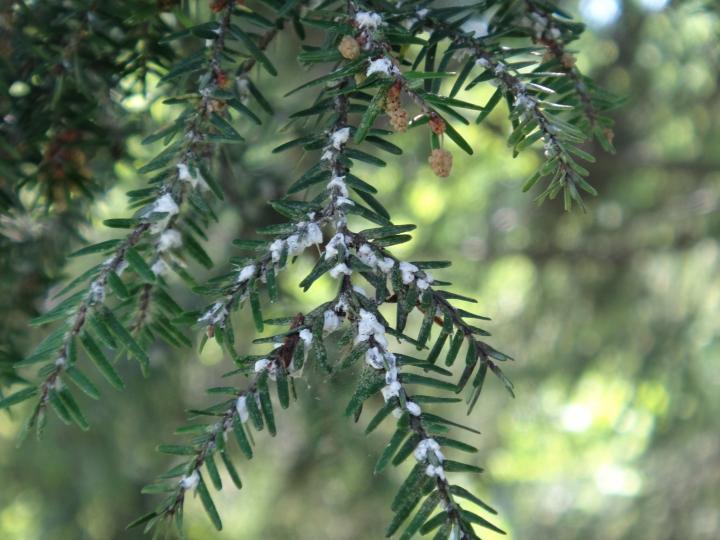 Earlier today, the Ohio Department of Agriculture (ODA) the Ohio Department of Natural Resources(ODNR) announced the discovery of a hemlock-killing pest in Lake, Geauga and Athens counties. The hemlock woolly adelgid (HWA) is a small, aphid-like insect native to Asia, which threatens the health and sustainability of two hemlock tree species native to the eastern United States.

HWA was first reported in the eastern United States in 1951 near Richmond, Virginia. Today, it is established in portions of 20 states from Maine to Georgia, where infestations cover about half of the range of eastern hemlock. Areas along the Appalachian Mountains have experienced significant mortality of eastern hemlock due to this devastating insect.

ODA reported that the infestations in Lake and Geauga counties were first reported to agency by a biologist working at a property in the Concord, Ohio area close to the Lake-Geauga county-line. The Athens County detection was the result of ODNR Division of Forestry survey work that was conducted near the village of Coolville.

HWA is primarily transported by wind, birds and infested nursery stock. HWA was first detected in a forested setting in Ohio in Meigs County in 2012.

At this time, ODA will move to expand its hemlock quarantine, enforced by ODA’s Plant Health division, to include Lake, Geauga and Athens counties, as well as Gallia County due to proximity. Ohio quarantine regulations restrict the movement of hemlock materials from counties known to be infested into non-infested Ohio counties. Ohio’s quarantine law also requires hemlock materials grown in non-infested counties in quarantined states to be inspected before being shipped and have a phytosanitary certificate verifying that the plant material is free of HWA when entering Ohio.

If you are interested in learning more about HWA, a free webinar of HWA and Biocontrol Efforts is scheduled on March 8 at 11:00 am EST as part of the Emerald Ash Borer University (EABU) virtual-semester beginning this year.  Additional information about EAB can be found on the National EAB website at Michigan State University at http://emeraldashborer.info