A Plant Walk in Wooster 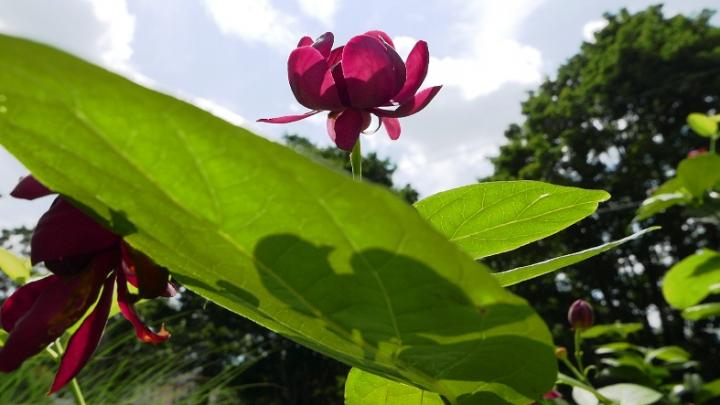 The great thing for all of us as plant lovers is the simplicity of enjoyment of a walk in the woods or through city streets, checking out the plants we know. Here are some snapshots of just a few plant sightings on an afternoon walk in Wooster, Ohio a few days ago.

First, as our lead photo, at the edge of a parking lot was Calycanthus, which a Clemson fact sheet notes has common names of Carolina allspice, strawberry-bush, sweet bubby {my favorite}, sweet Betsy, and spicebush {my least favorite since we think of Lindera benzoin as spicebush up North). Calycanthus florida is native as far north as Pennsylvania, though often it is thought of more as a plant of the Carolinas and mid-Atlantic states.

The large flowers on this specimen in Wooster suggest that this was not the straight Calycanthus floridus species but a hybrid of C. floridus with C. chinensis. I suspect that this was ‘Hartlage Wine’ or ‘Aphrodite’. Some suggest that ‘Aphrodite’ is fragrant with heady strawberry-like aromas and ‘Hartlage Wine’ is not. This one was not fragrant, so…

Next on my walk were some corneliancherry dogwood trees (Cornus mas), with their turning-to-cherry red-colored fruits looking good. This is not a common street tree, but I suspect the hand of former Secrest Arboretum curator Kenny Cochran in these selections in concert with the City of Wooster arborists. They are delightful to eat, but not yet.

Wait until they are a soft almost purple-red to enjoy their still tart taste. Until then, whew, as OSU pollinator specialist Denise Ellsworth once learned years ago; they are beyond tart. I wonder who advised here to give them that premature try?  Corneliancherry dogwood juice is popular in Eastern Europe and you can find jams in specialty stores here in Ohio. They make a good wine, and juice mixed 1;4 with apple cider is ruby-colored, and a tartly sweet treat.

Of course, there were a few pests. European euonymus was invading plantings and even “fake trees” as in a telephone pole in a back alley. Flowers are pretty, though, four-petaled, waxy, and creamy-white. Also, there are a number of Norway maples (Acer platanoides) in streetscapes in Wooster and throughout the U.S., though many now see them as invasives. Pictured here is the classic leaf shape and horizontally aligned wings of Norway maple fruits – and a touch of maple tar spot disease.

Then there was some bacterial fireblight on Callery pear, a common sight this year on many fireblight-susceptible plants in the rose family (only members of the Rosaceae are affected by fireblight). Warm wet weather during bloom back in Spring is a key to frieblight development.

To include an insect, there was mimosa webworm (Homadaula anisocentra) on honeylocust. These insects spin a web around honeylocust leaflets and can make a fine tree messy. It is thought that this non-native insect was introduced to the U.S. in the 1940s, which was also the time that honeylocust plantings increased as replacements for American elms lost due to Dutch elm disease and elm phloem necrosis (now known as elm yellows disease).

Note on Names: The name mimosa webworm reflects the fact that this insect occurs on mimosas as well honeylocust, it’s related cousin in the Fabaceae. The name for elm yellows/elm phloem necrosis, a serious problem on elms today, sounds better in French as Nécrose du liber de l'orme or in German as Phloemnekrose der Ulme. In any language it is a significant problem, including on newer elm selections and hybrids.

To close: the canopy of a honeylocust above a Wooster street illustrates one reason this tough street tree is a common selection. And finally, Wooster sidewalkifitti reminds us to be good.