A Non-Native Crayfish in Southwest Ohio 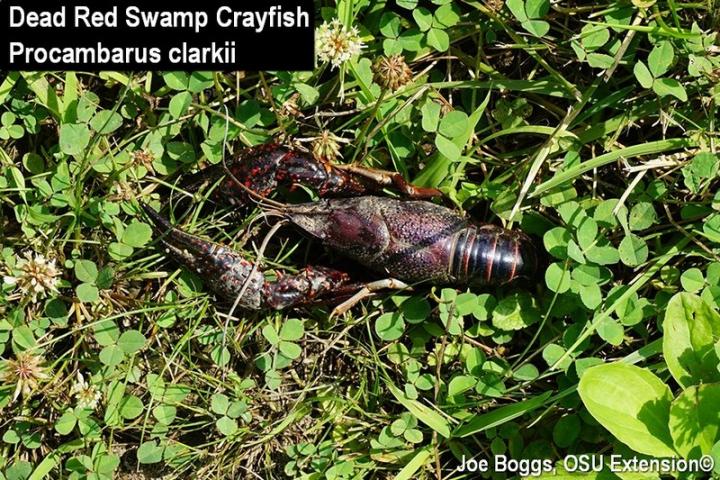 I came across two odd things last week in Gilmore Ponds, a Butler County MetroPark in southwest Ohio.  The first was hearing a sickening "crunch" when I unwittingly stepped on the body of a dead crayfish; specifically the front half of the body (cephalothorax = head + thorax) since the abdomen was missing.

The second odd thing was a foul odor hanging in the air which I thought was wafting from a dead animal.  I was correct, but the stench was drifting from dead animals, plural.  I came across hundreds of dead crayfish in various stages of malodorous decomposition.  Almost all of the bodies lacked abdomens indicating there were probably some satiated raccoons, possums, etc., and birds of all sorts, near at hand.  Of course, the question at hand was "what killed all of the crayfish in the first place?" 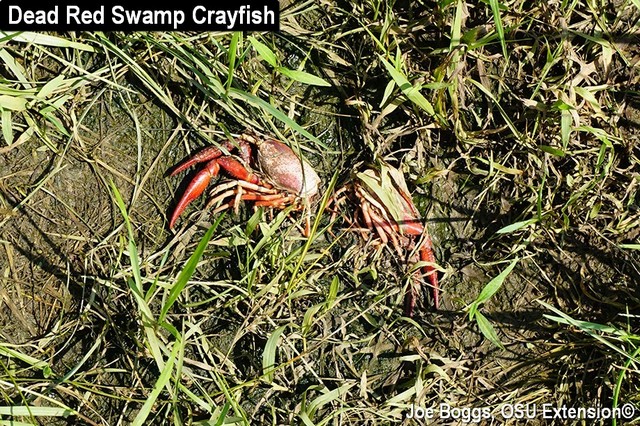 My quest for an answer revealed a shocker:  Zachary Loughman (West Liberty University, WV) identified the crayfish from pictures that I sent him as the Red Swamp Crayfish (Procambarus clarkii).  This crayfish is also called the Louisiana crayfish which provides a clue to its origin.  Its native range extends throughout the southeastern United States including Louisiana where it's collected or "farmed" to become the main ingredient served in crawfish dishes, both steamed and etouffee.  Indeed, I have enjoyed meeting this crayfish (crawfish) several times before, but not so much during my hike last week. 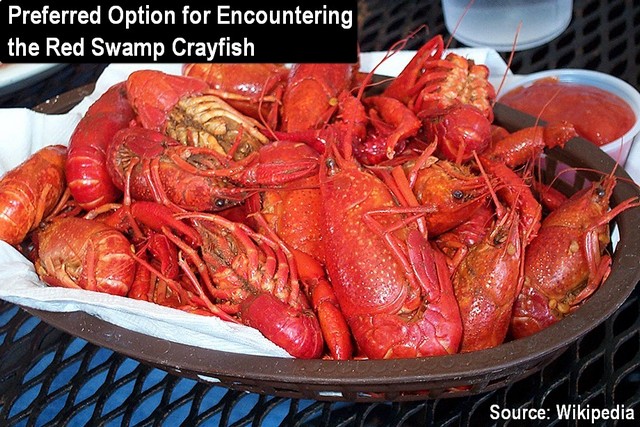 My next discovery was more welcomed.  OSU has a resident crayfish expert.  Mael Glon is a Ph.D. student in our Department of Evolution, Ecology and Organismal Biology.  His thesis research focuses on crayfish and I talked with him on the phone this past Sunday to learn more about the red swamp crayfish and about crayfish in general.  Mael has a very instructive website on crayfish which you can visit by clicking on the hotlink under "More Information" below.

The Plot Thickens (Sans the Roux)

Mael noted this is not the first time the red swamp crayfish has been found in the Midwest including Ohio.  It's been discovered in the northwest part of the state around Toledo and several spots boarding Lake Erie.  He and others have even found isolated populations in the Greater Columbus area.  However, it appears to be new to the southwest part of state.  Coincidentally, the crayfish was recently discovered in two areas of Michigan.

Red swamp crayfish is a "big guerrilla" in the crayfish world.  First, it's very hardy and aggressive against other crayfish, particularly our natives.  Its success is augmented by its quick growth to maturity; they grow big fast.  Their rapid growth is one reason these crayfish are highly prized by the food industry.  Red swamp crayfish also have a high fecundity with each female producing as many as 500 – 600 eggs per clutch. Coupled with having as many as two generations per year in Ohio and the math paints an alarming picture.

Another attribute that makes the red swamp crayfish such a strong competitor is its burrowing behavior.  Experts divide burrowing crayfish into three general categories:  Primary, Secondary, and Tertiary.  These categories are "general" because one size does not fit all:  some crayfish don't fit neatly into just one of the three categories.

All crayfish are capable of burrowing; even those that live in streams (Tertiary).  However, these crayfish only produce rudimentary burrows such as a groove beneath rocks to accommodate a hideout.  Secondary burrowers produce more structured excavations, often in stream banks.  However, their simple burrows may only consist of a single chamber and tunnel from which they scuttle out to take a swim.

Primary burrowers are the true excavators.  Their burrows may include multiple chambers and their tunnels often extend deep into the soil far from streams.  Of course, they must reach groundwater because all crayfish breathe with gills.  This is why we usually find their burrows in poorly drained soil such as in or near drainage ditches. 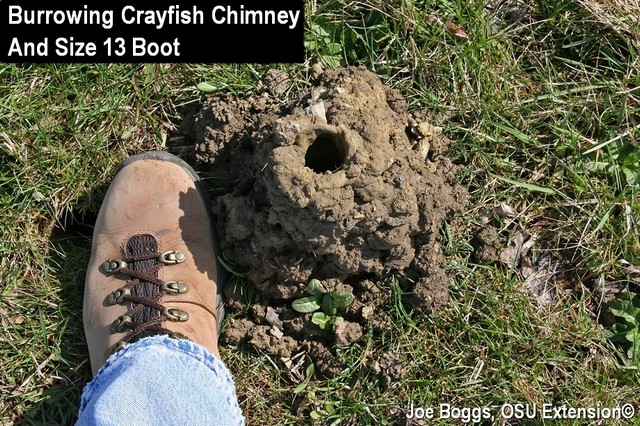 The life-style of primary burrowers is supported by a number of evolutionary adaptions.  Their claws (singular = chela; plural = chelae) are modified for digging.  They have bigger gills to support their sauntering about on land (more about this later), and their abdomens are often smaller than their more aquatic cousins because they don't need powerful swimming muscles. 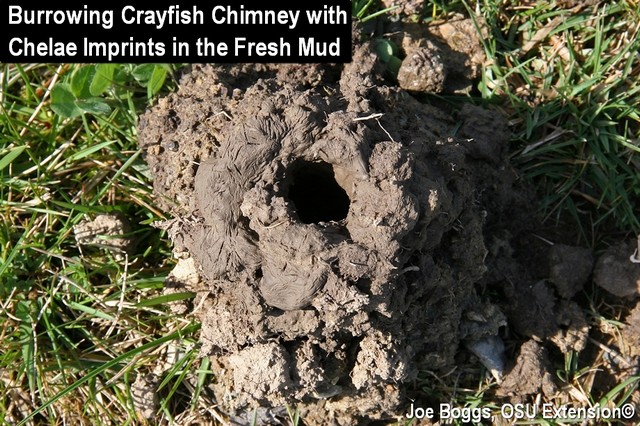 Red swamp crayfish generally fit into the primary burrower category; however they can also thrive if immersed in water.  Mael noted this crayfish's changeable life-style reflects the influences of environmental conditions encountered in its native habitat in the Deep South.  During the winter and spring, low-lying land is often flooded meaning it's good to be able to survive in a true aquatic environment.  But the water often dries up during the heat of the summer which selects for crayfish that can burrow into the soil down to groundwater.  The red swamp crayfish's switch-hitting life-style provides considerable survival benefits.

Why Did They Die?

Primary burrowing crayfish must excavate to groundwater because they breathe with gills which are located beneath their hard carapace; the armor the covers their cephalothorax.  However, this fails to fully explain how they can march around on land for extended periods of time (at night) without dying from lack of oxygen.

Indeed, they can die from lack of oxygen which is why they can't depend on groundwater as an oxygen source.  The groundwater beneath our feet is usually "anoxic" meaning that it has a low concentration of dissolved oxygen.  This is why primary burrowing crayfish have evolved the capability to draw oxygen from the atmosphere through their gills as long as their gills are moistened with water; the water functions as a "bridge."  This game-changing adaptation allows primary burrowing crayfish to behave almost like terrestrial creatures … as long as they can occasionally take a dip in water; even anoxic groundwater. 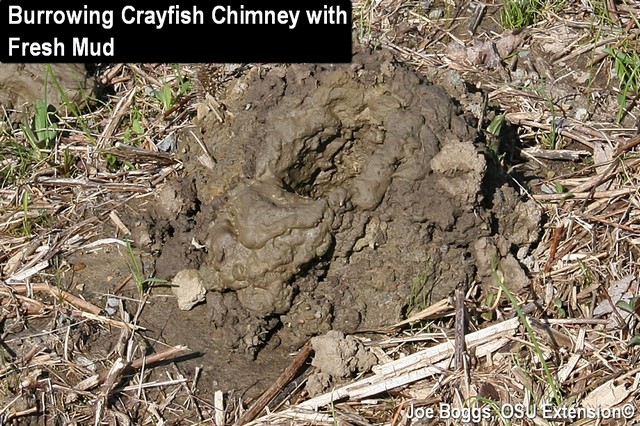 For this reason, burrowing crayfish need a year-round source of water that remains unfrozen and groundwater fits the bill perfectly.  They also need water for the survival of their eggs and their offspring.

Of course, there is such a thing as too much of a good thing.  Our weather thus far this season in southwest Ohio has been exceptionally wet. Gilmore Ponds, as its name implies, encompasses low-lying land with a high water table; the groundwater is inherently close to the surface.  We had heavy rainfall shortly before my walk in the park which created flooding conditions followed by high air temperatures; it was pushing 90F the day of my walk. 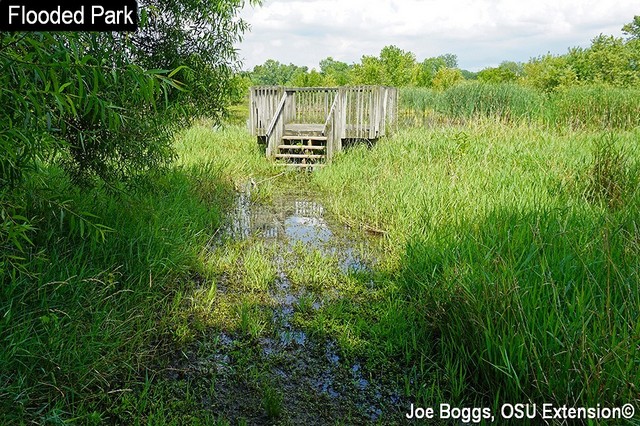 So, here's what probably happened.  The rising groundwater drove the burrowing red swamp crayfish from their burrows.  They would have been OK if the water had remained; they can survive flooded land.  However, the water receded leaving them stranded above ground to the delight of various predators and to eventually experience the baking sun and hot heat of the day.  In other words, they were steamed.  This speculation "fits" with my discovery of a lone survivor in the cooling shade of a grove of trees where it had stayed out of the sun and somehow evaded prowling animals bent on enjoying steaming dishes of crawfish. 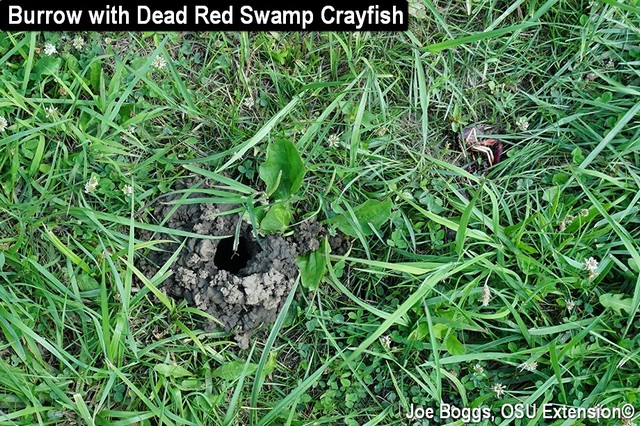 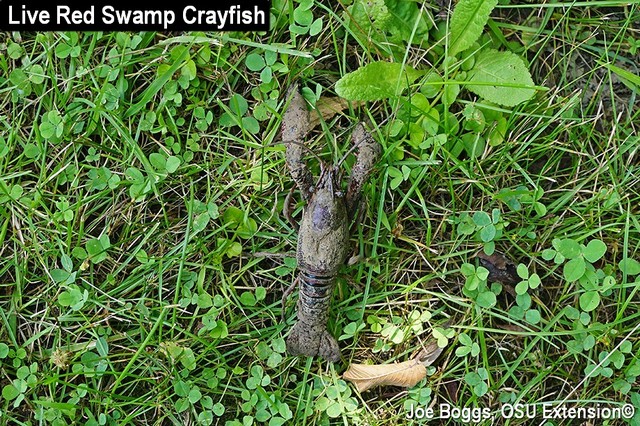 How Did Louisiana Crayfish Reach Ohio?

This non-native crayfish is able to spread naturally.  However, its far-flung distribution points to non-natural spread as being the primary reason we are now dealing with red swamp crayfish in parts of Ohio; they didn't walk here.  Mael shared several ways this crayfish may have gotten here; some were surprising to me.

Obviously, red swamp crayfish are sometimes imported live by the food industry.  The commercial "farming" of these crayfish began in Louisiana and elsewhere in the southeast U.S. and has been widely adopted in Asia in recent years, so they're not just being imported from the south.  Of course, one would hope that crayfish intended for our plates would remain on our plates; if one crawls off, it's badly undercooked.  Still, shipping crates of live crayfish certainly presents a risk; frozen would be a safer option.

Red swamp crayfish are also a common species supplied by biological supply houses for use in classroom teaching.  What happens when class projects come to an end?  If you know a school teacher, please let them know they should not release their science subjects "into the wild."  The "wild" in Ohio is a non-native site where they can go wild at the expense of our native crayfish.

Mael has also observed these big and hardy non-native crayfish being sold in pet stores.  Of course, when people grow tired of these unusual "pets," they may rid themselves of their crustacean charges by releasing them "into the wild" (see above).  I do wonder if there are some huge crayfish trudging through the sewers of New York feasting on alligators. 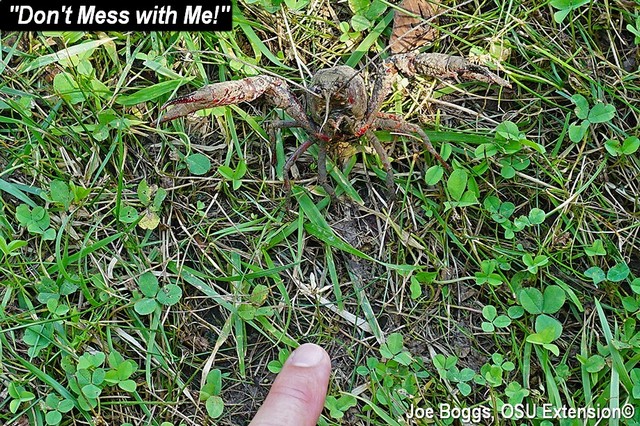 I do not know what will happen relative to the red swamp crayfish in Ohio.  However, I suspect the situation may be similar to emerald ash borer (EAB).  This non-native may have already become so widespread, it's now out of the reach of any realistic eradication efforts. 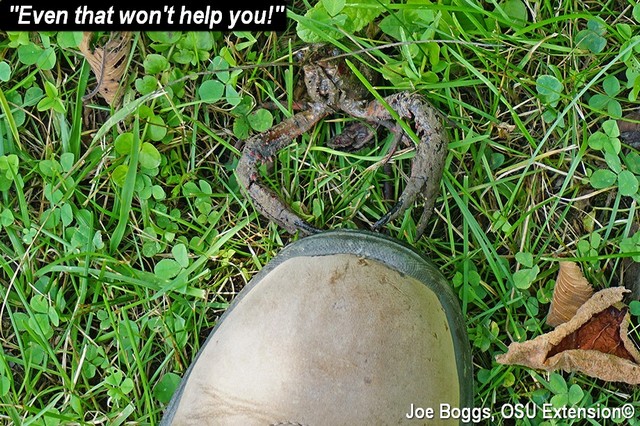 Of course, there are some important differences between crayfish and EAB.  We have limited tools to control this non-native crayfish. Even more importantly, we should not declare war on crayfish even if we suspect that we’re dealing with a non-native because our well intentioned efforts may miss the mark and kill native crayfish.  Also, crayfish can't fly, so natural spread will be much slower compared to EAB.  Thus, it remains important for us to focus our efforts on limiting their distribution through human-related activities.

One thing that is certain as we learn more about crayfish in general, thanks to Mael and others, is that these fascinating creatures are an integral part of healthy aquatic and terrestrial ecosystems.  In fact, I would need far more space than I have here to list their numerous benefits; just do a Google search.

If you suspect that you've come across the red swamp crayfish (a.k.a. Louisiana red crayfish) in Ohio, you can report your find in a couple of ways.  The website titled EDDMapS Midwest (formerly the Great Lakes Early Detection Network) is dedicated to rapidly responding to new invasive species sightings in the Great Lakes and Midwestern states.  You can report online (click on the hotlink under "More Information" below) or you can download the smart phone apps for iPhones or Androids and report it using that handy method.

You can also alert Mael through his informative website (also highlighted under "More Information").  In fact, I would urge that you take a look and Mael's website to simply learn more about our native crayfish.