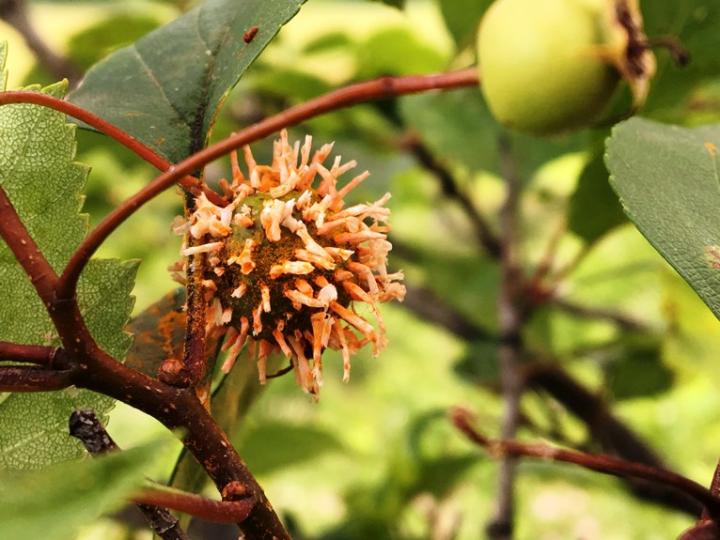 Let us call this A Case of Gallignostics. Plant galls are defined as abnormal plant growths caused by a gall-maker; the gall-maker being certain insects, mites, fungi, and bacteria. From horned oak gall to bacterial crown gall, from maple bladder galls to cedar-apple rust galls, there are many galls of interest to horticulturists. Relative to all this, Joe Boggs recently got an e-mail from Michael Goldman of the Grange Insurance Audubon Center:

I'm a big fan of the BYGL, and found something here that might be interesting for it.  The pictures I took look like some kind of gall on hawthorn berries. The galls make them look like a medieval weapon or submarine mine. Very cool stuff!...

Great shots!  Those aren’t galls; they are the spore-producing structures of the cedar-quince rust fungus, Gymnosporangium clavipes, which is responsible for the disease known as Cedar-Quince Rust.  The “cedar” in the name is actually eastern red cedar, which is a juniper.  This fungus must alternate between junipers and a member of the rose family, such as quince, hawthorn, crabapple, etc., to complete its life cycle.  The infections on the hawthorn fruit are pretty dramatic looking, but cause no harm to the health of the tree.  However, the fungus can also infect stem tissue which can cause stem dieback…

JoeMandu speaks:…Of course, galls are in fact much more interesting!

Joe, ever the entomologist, does love his insect-induced galls. More importantly,  this exchange is a great exemplar reflecting the challenge of plant problem diagnostics: the fungal growth coming out of that hawthorn fruit does look like a gall, in fact it looks like a gall associated with cedar rusts! I quite clearly remember being confused by this when learning about cedar rusts in graduate school.  The actual gall relative to this rust, however, occurs on the juniper.

Cedar rust galls are caused on juniper by two similar cedar rust fungi, the cedar-apple rust fungus (Gymnosporangium juniper-virginianae) and the cedar-hawthorn rust fungus (Gymnosporangium globosum). These consist of both plant and fungal tissue, and look a lot like what Michael saw on the hawthorn fruits (haws), as seen below. {The cedar-quince rust fungus is a little different on juniper, producing an orangish fungal growth on the juniper stems rather than a gall}.

However, as Joe alluded to, the cedar rust fungi producing those spores on junipers then spreads those spores to the rosaceous hosts. These cedar rust fungi then mate inside e.g. hawthorn leaf or fruit tissue, and then produce a new type of spore that then rotates back to junipers. With cedar-quince rust the infections tend to be mostly on fruits and when these new spores emerge from the hawthorn (or quince or crabapple), the infected fruits look somewhat like fungal spores emerging from the juniper galls.  Thus confusion between these two very different events.

Clearing up this confusion and getting the diagnosis and the cycle of these diseases straight matters.  Spores of the fungi on juniper only infect the rosaceous host, and for a short period of time in the spring. Spores emerging from the hawthorn fruits only infect junipers – and not the rosaceous hosts, and infect them for several months in the summer and fall. So, if you were spraying to break this cycle on crabapples or hawthorns, spray in spring. If spraying to prevent infections on junipers, you must spray over a several month period.

An additional perspective: I once suggested to a nurseryman that rarely do we consider control cedar-quince rust disease on the junipers, with, for example, apple growers usually the ones that have concern about this disease. I also noted that multiple sprays would be needed for junipers, so it is more than most nurserymen would consider. To which he replied that since he made a lot of money on specialty juniper sales to secondary growers, for him control cedar quince rust on the juniper host was paramount.  Not only that but it was a two-year cycle: but that it a story for another day.

At any rate, which stage you might want to control depends on whose ox is being gored. But back to the gallignostics. The Greek “gnostikos” means “having knowledge”, so if all of these diagnostic conundrums, signs and symptoms, and the fungal and disease life cycles all seem rather complicated, it is because –  they are complicated.  Rust never sleeps.