Roadside Rest: Living in the Moment 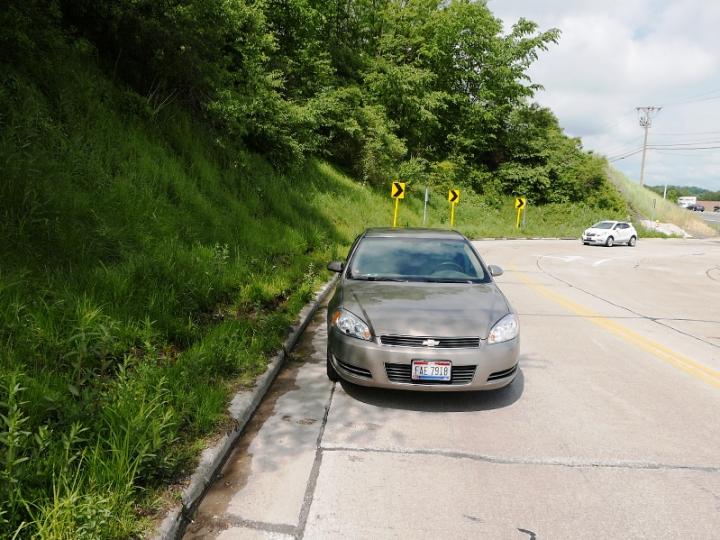 One of the things I ask my Sustainable Landscape Maintenance students at the end of the semester is to expound upon 10 Things They Learned in class. Most of these are the core of the course: including plant selection and knowledge, plant pest, plant maintenance, invasive species examples. Pete Grantham of Akron though, added:

I learn from you so much about living in the moment, talked to me about your hitchhiking [the old days] and how you think it’s fun to run out of gas. These moments that others would consider worrisome are moments of pleasure for you because you let yourself enjoy the moment for what it’s worth. This is a trait I hope to grow in to and work on with myself and you helped me learn it better.”

I admit to being proud of this one.  My point in class being that one of the glories and great skills of  our plant lover’s path with nature and nurture that we are ever embarking on in life is that, even , if say, we were plopped down somewhere along the side of the road,  we can be un-bored and enjoy and learn about the vegetation and its fellow travelers.

Even if – we run out of gas. So, my latest episode was a week ago on Saturday in Fairlawn Ohio. I made it to the side of the road in a fairly safe place, and camera in hand checked out the plants that naturally (isn’t it ironic?) invade and populate such a site.

There was a towering cottonwood, ashes dead from emerald ash borer, non-native ox-eye daisy and native daisy fleabane.  There were many usual suspects among the non- natives, from Autumn olive to Dame’s rocket (Hesperis matronalis) in flower. The latter comes in many colors from white to pink to purple and many hybridized gradations in between. It is often mistaken for phlox, but is easy to distinguish. Dame’s rocket has four petals and is in the mustard family (Brassicaceae) with its cruciform petal and stamen arrangement. Phlox (Phlox spp.) has five pinwheel petals and is in the Polemoniceae.

There were insects such as spittlebugs. There were three plants in the rose family (Rosaceae) with two of their most problematic diseases. Brambles (Rubus spp.) were abundant and came with orange rust, a much reviled problem for raspberry and blackberry growers. Multiflora rose was present as well and came complete with rose rosette virus, which, spread by eriophyid mites, has become a major headache for rosarians.

And one last rosaceous plant: crabapple (Malus). We all have noticed how much Callery pears, introduced from Asia, have become invasive along roadsides and fields and, yes, even wetlands. The presence of this pear is betrayed to even casual observers by their white flowers in spring. Crabapples have been with us longer, but it must be admitted there are many of them in similar sites in spring, a few weeks later than pears, in their multi-colors and shapes.

I have been appalled to see fields of literally tens of thousands of crabapple seedlings in fields in nature preserves. This was pointed out to me by ex-OSU Extensioneer Dave Goerig of Davey Resource Group. And yes in wetlands of that nature preserve. As a dedicated crabarian, this abundance of bird- assisted volunteers was an eye-opener to me, even knowing that questions of crabapple invasiveness have been raised over the years, with some research on the topic.

Lo, here at my enforced roadside rest, there were dozens of crabapple seedlings, most with trifoliates that indicate they are probably of Malus sargentii origin.

So, are crabapples native? Are they invasive?  Well, the genus Malus, apples and crabapples, originated in the Kazakhstan area of central Asia, probably as an early genetic version of Malus baccata – a crabapple! Much genetic diversity of Malus developed in China and spread  eastward and westward in many ways over tens of millions of years, from conjoined continents, land bridges, and in recent millennia and centuries via trade routes to the Middle East and Europe, and of course more recently under the auspices of such seedsmen as Johnny Appleseed.

Thus, we have Malus sargentii  that is considered native to Japan, though Malus itself developed in the Kazakhstan region, and Malus ioensis  is considered native to North America, but had help getting there and then diversifying over the eons. As I traveled eastward on Memorial Day last Monday, I noted, this time without running out of gas, numerous patches of obviously bird-disseminated trifoliate crabapples along the roads.

So, native or not, invasive or not, arriving when and how, and are they now causing problems in natural areas – these are all never-ending questions searching for reasoned answers. After all, Malus is as American as apple pie – or is it? Doctors say so, at least once a day.

Which reminds me of a great regret I now have every day. For the past decade Jim Zampini tried to schedule a trip with Erik Draper and me to the Mahoning County areas of I-76 and I-70 to check out these roadside crabs for possible selection. We missed it and miss you Jim, but your other crabapples live your legacy.