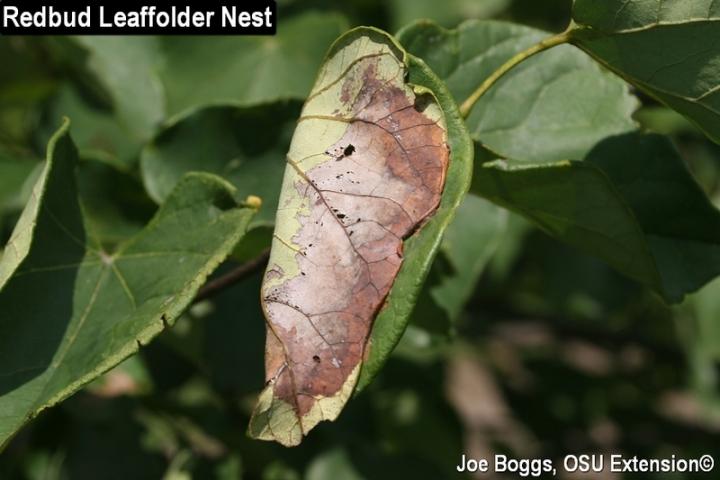 Although the growing season is winding down, Extension offices in Ohio are continuing to receive questions regarding redbud leaves turning brown after being folded over or "glued" together.  The culprit is the Redbud Leaffolder (Fascista cercerisella; order Lepidoptera; family Gelechiidae). 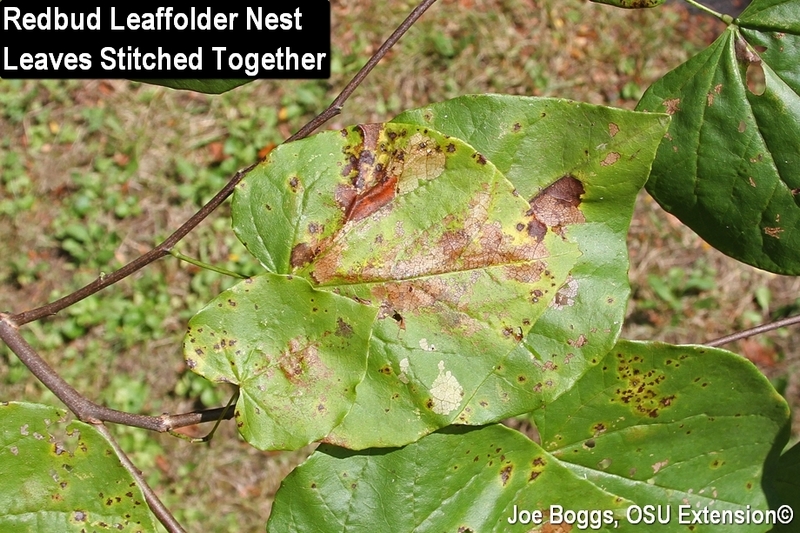 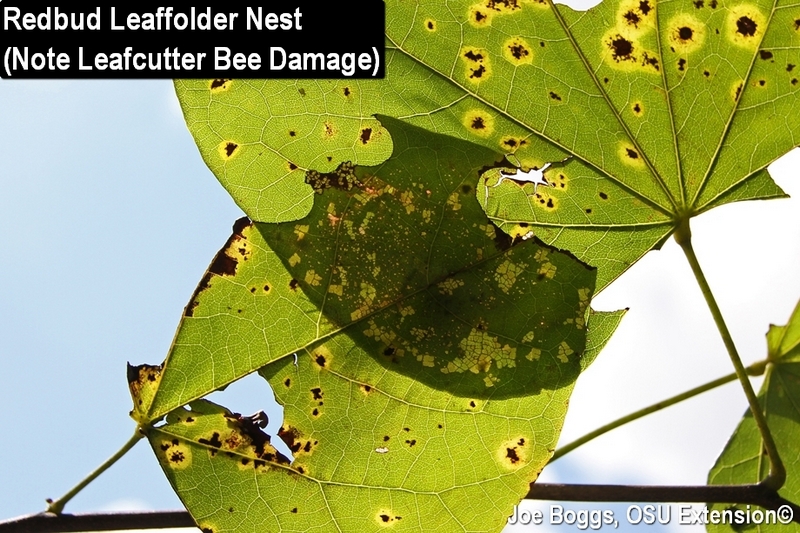 The caterpillars of this velvety black moth use heavy silk to produce two types of nests.  As their common name implies, the caterpillars occasionally form nests by using silk stitching to fold together opposite leaf edges.  They will also stitch together neighboring leaves to produce flat nests much like a leaftier caterpillar. 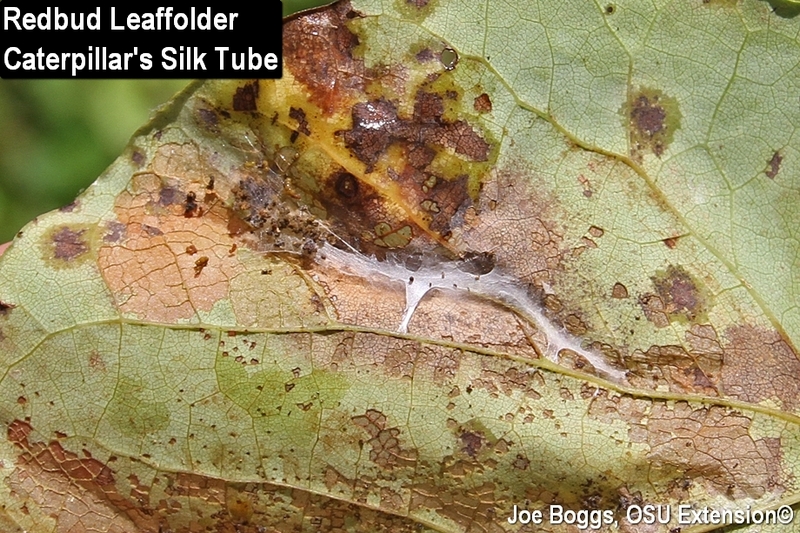 The caterpillars reside in heavy silk tubes within their nests.  They partially emerge out of their tubes to feed as skeletonizers, consuming the upper and lower leaf surfaces.  The affected areas turn orangish-brown which sharply contrasts with the normal dark green color of the foliage.

Early instar caterpillars are cream-colored and have no discernible markings.  As the caterpillars mature, markings begin to appear.  Eventually, alternating thoracic and abdominal segments darken to produce a striking appearance of black and light-green bands running the length of the body. When disturbed, the caterpillars wiggle violently and drop from the nests.  As participants in the 83rd Ohio Plant Diagnostic Workshop observed, the caterpillars have great entertainment value! 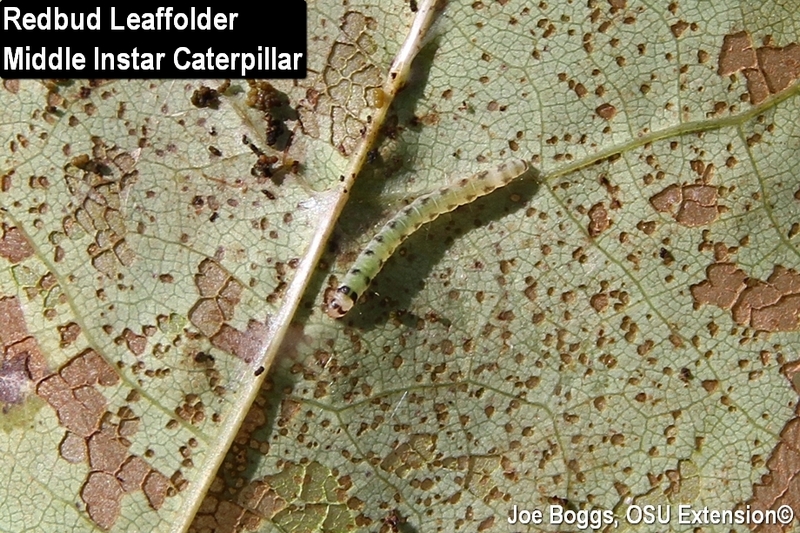 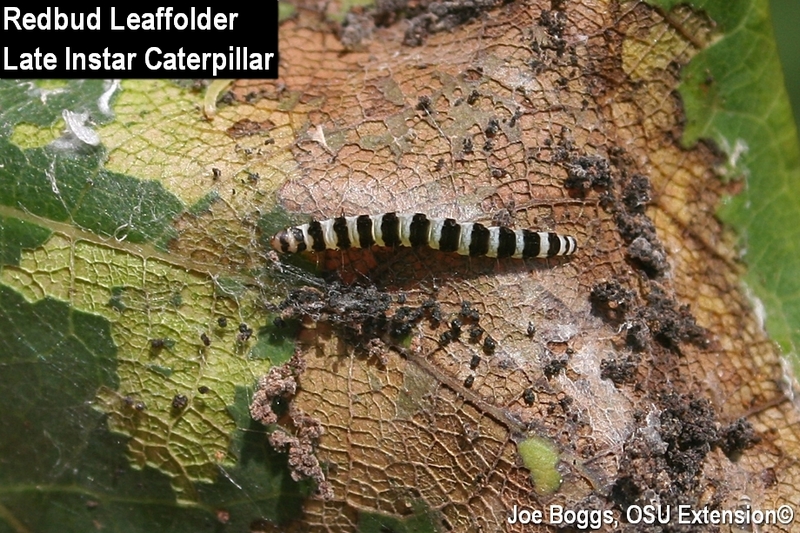 Two-to-three overlapping generations occur per season in Ohio with 2nd and 3rd generation nests containing caterpillars in various stages of development.  Populations tend to build with each generation.  The moth spends the winter as pupae in debris and fallen leaves beneath infested trees.

Insecticidal applications are not generally required for managing this moth in Ohio landscapes.  Populations tend to rise and fall naturally from year-to-year.  Also, most of the damage is produced by final generation caterpillars which occur late in the season.  Consequently, the leaffolder has a limited impact on the overall health of the tree even during localized population outbreaks.  Where practical, populations can be reduced by pinching nests to kill caterpillars, and by raking and destroying fallen leaves to reduce the number of overwintering moth pupae.