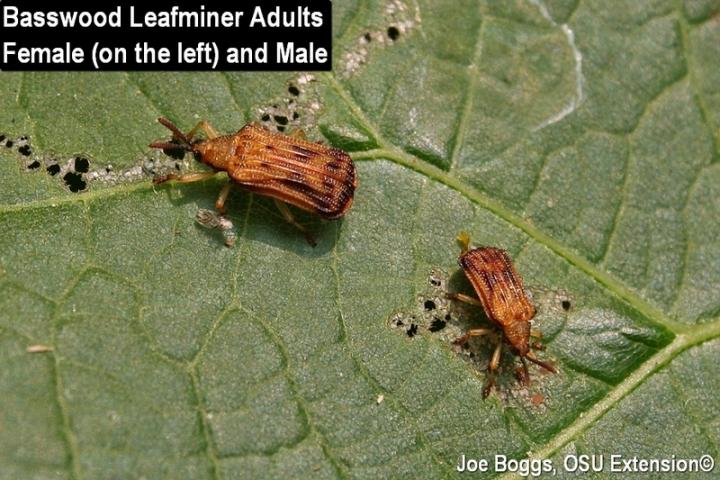 BYGL readers should be familiar with the Basswood Leafminer (Baliosus nervosus; previously Baliosus ruber).  We've reported on the skeletonizing and leafmining activities of this native beetle for years.  High populations cause entire trees to become reddish-brown, usually in mid-to-late August.  Late summer travelers on the northern portion of I-75 in Ohio may have observed "flaming" basswoods gracing the woodlots along the route. 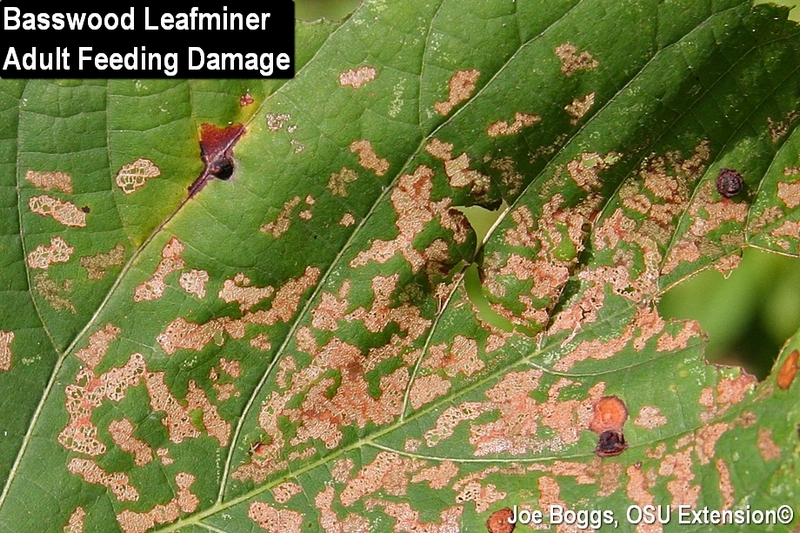 For reasons not clearly understood, the beetle has remained relegated to northern parts of Ohio.  We had never found the beetle in southern Ohio.  That changed Thursday when Curtis Young found beetles and adult feeding damage on basswoods in Cincinnati.  The population was small so the adult feeding activity could be easily overlooked.  It may also be mistaken for Japanese beetle (Popillia japonica) damage by those who have never seen basswood leafminer damage up close.  However, there is no doubt that those living in the southern part of the state must now be vigilant for this beetle.

The basswood leafminer is closely related to the locust leafminer (Odontota dorsalis) which can cause black locusts to become "flamed" in late summer.  Both belong to the leaf beetle family Chrysomelidae as well as the subfamily Cassidinae and the tribe Chalepini.  Most beetles in this tribe share similar life cycles and life styles including adults feeding as leaf skeletonizers and larvae feeding as leafminers. 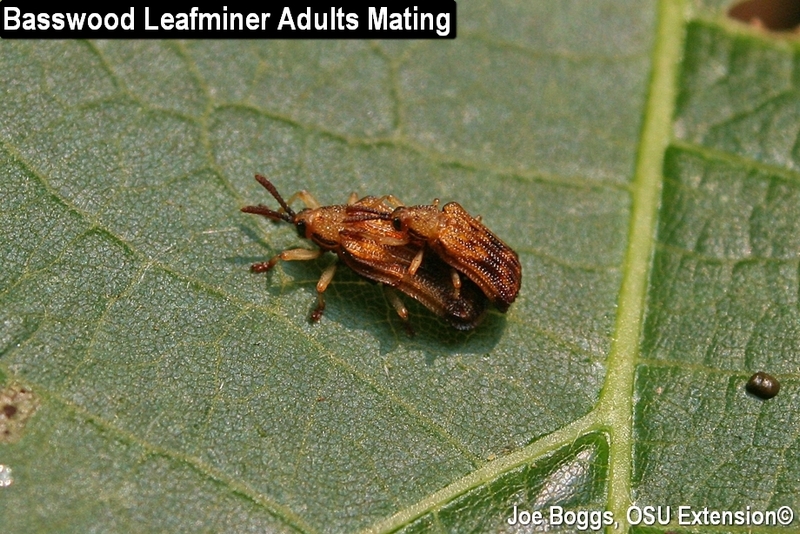 Basswood leafminer adults are wedge-shaped and around 1/4" long; females are slightly larger than the males.  There is a single generation per season; however, as with the locust leafminer, adults are present at two different times during the growing season.  Adults spend the winter in leaf litter beneath host trees.  They emerge in the spring to feed as skeletonizers on newly expanding leaves.  The damage may be noticeable when viewed up close; however, it's seldom severe enough to cause entire trees to change color. 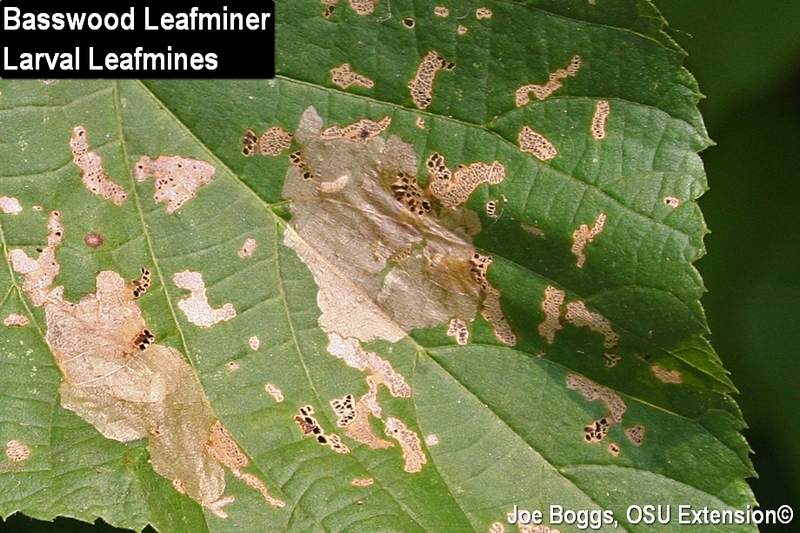 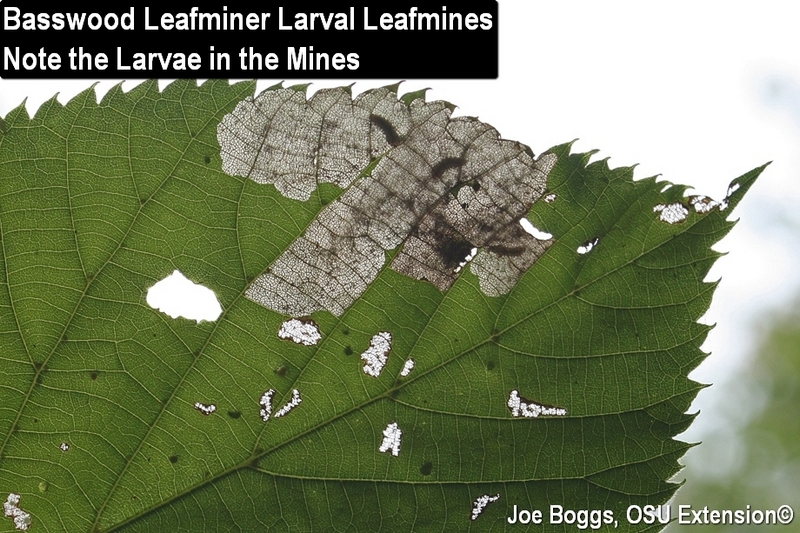 Eggs are laid in June with females inserting single eggs beneath the upper epidermis at the edge of an area where they have skeletonized.  The resulting grub-like larvae feed as leafminers between the upper and lower epidermis.  The blotch-like leafmines contain a single larva at first, but may eventually house several larvae as mines coalesce.  Pupation occurs within the leafmines and new adults emerge in August.  The leaf feeding damage from this new crop of adults combined with the larval leafmining activity is responsible for the annual flaming of basswoods. 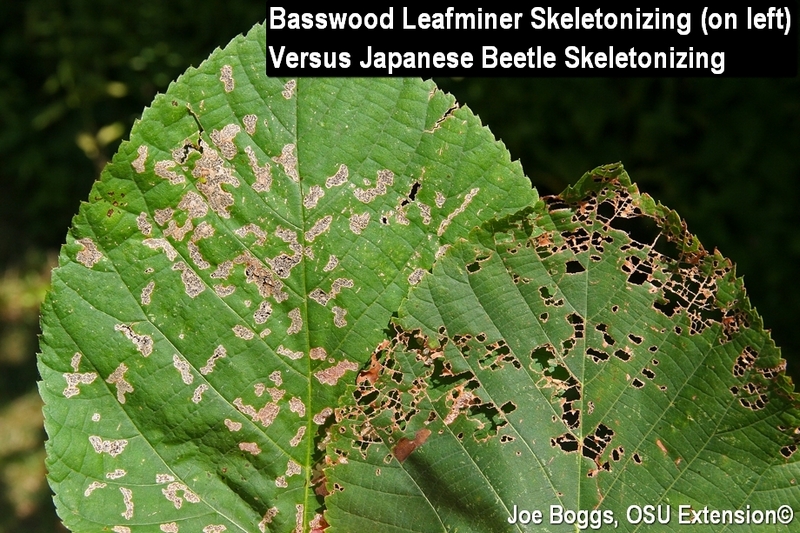 Although the beetles are considered leaf skeletonizers, their damage is most accurately described as "surface skeletonizing" or scarifying.  The small adults have mandibles that are too small to chew completely through the leaf; they can only remove the leaf surface.  The epidermis on the opposite side of the damage dehydrates and degrades leaving behind a fine-textured matrix of skeleton-like leaf veins.  This is unlike the coarse skeletonizing caused by Japanese beetles which use their much larger mandibles to consume everything but the larger leaf veins.

The basswood leafminer is most often associated with its namesake host; however, beetles may also feed and develop on a number of other hosts including other members of the Tilia genus such as little leaf linden (T. cordata) and silver linden (T. tomentosa).  Last September, Curtis found adults feeding on American hophornbeam (Ostrya virginiana) and  American elm (Ulmus americana) on the Ohio Northern University Campus in Ada, Ohio.  However, he did not find larval leafmines.  The literature notes that both the adults and leafmining larvae may feed on oaks and apples.